This feature was produced in collaboration between Vox Creative and KFC. Vox Media editorial staff was not involved in the creation or production of this content. 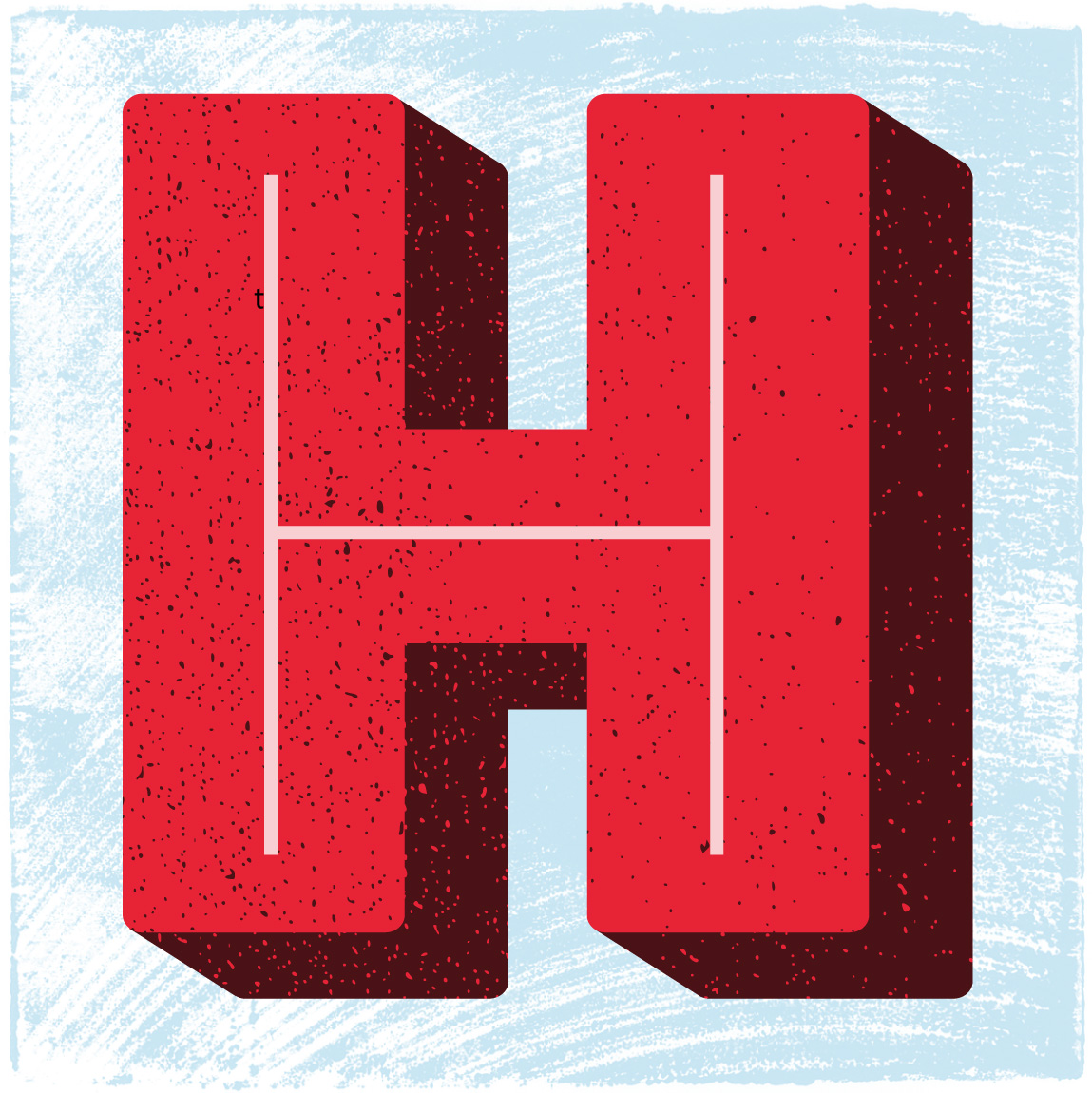 ot chicken is the indigenous food of Nashville," says Bill Purcell, the former mayor on whose watch the Music City Hot Chicken Festival was founded. Even over the phone, Purcell oozes passion when discussing his city’s iconic dish. Nashville is famous for the twang of its country music, the neon lights of its honky-tonk bars, and its hot chicken. Mesmerizing, addictive, and a source of deep-rooted local pride, this spicy fried chicken has an almost cult-like following. Nearly everyone in Nashville eats it, there are strict rules on how to do so, and recipes are shrouded in secrecy.

Hot chicken is something you go out to eat; requiring a lot of labor — and perhaps a deep fryer — it’s not something typically made at home. Traditionally, it’s served in one of a dozen or so casual restaurants sprinkled around the city. Each place has its loyal and devoted customers. Bolton’s Spicy Chicken and Fish is one of them, a no-frills roadside shack of a restaurant. Gerald Glover was inside, enjoying a plate of it. He admits to eating hot chicken three or four times a week. "It’s so hot it kills you," he says, "but so good you can’t stop eating it."

Hot chicken is ordered in pieces, as tenders, as wings, or on a stick. You also order it by degree of hotness. Make no mistake: This is not the typical hot wing, devoured while watching a football game. Imagine, instead, if the crispiest fried chicken you’ve ever had took detour through the fieriest spices on earth, and then was further doused with more, insanely hot spices on its way to your plate. Hot chicken is hot. 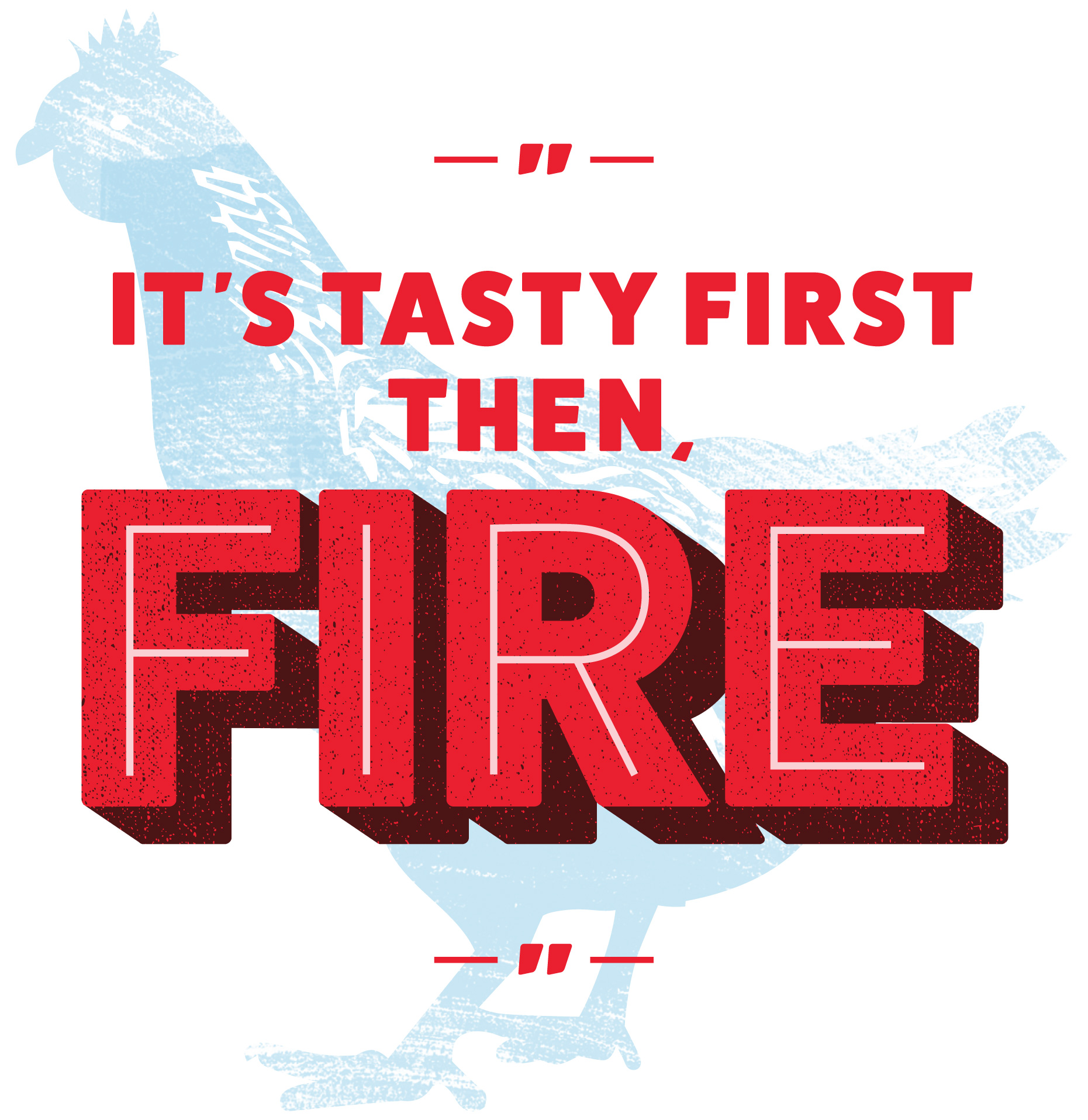 When you place your order, be prepared to wait a good 15 minutes for your meal; hot chicken is always made fresh. When it’s ready, it will arrive on a disposable plate, with the volcanically sizzling chicken resting atop of a nest of sliced white bread, to sop up the hot, delicious chicken drippings. Tucked alongside will be pickles and, occasionally, sides like French fries or coleslaw.

The chicken arrives fresh from the kitchen, glowing and steaming like hot coals and impossible to touch. A plastic fork and knife is the only route in. After a few bites, you will find yourself surrounded by wads of paper napkins, which you will be using to mop up the bright red fat drippings that seem to fall everywhere. Your mouth will be burning, your nose running, and your eyes streaming tears. As a precaution, most chicken slingers recommend purchasing a fruit juice chaser, insisting that soda or water only adds fuel to the fire.

What makes hot chicken quite so unique, and so hot? No one will say — trade secrets. The basic components of the dish are chicken, a combination of spices, and careful cooking in hot oil. But there’s also a special ingredient. "It’s all about the love," says Aqui Hines, who runs kiosk called 400 Degrees Fahrenheit in downtown Nashville. "Hot chicken can make a bad day better. It makes you sweat, but it causes conversation and leaves a lasting impression of comfort." But what, specifically, goes into her chicken? Hines would only smile coyly, in a "bless your heart" sort of way. It began to seem rude, even intrusive, to pry too much into this Nashville secret.

But a little more legwork around reveals some hint. Techniques such as brining, basting, dredging, coating, and deep-frying are mentioned. Spices such as cayenne pepper, oregano, chili powder, garlic powders, and paprika seem to be involved.

Each restaurant has its own secret preparation, with blends of spices that yield different levels of heat. At Hines’s stand, there are three levels of heat — 100 Degrees, 200 Degrees, and 400 Degrees. At Pepperfire Hot Chicken in East Nashville, the menu offers five levels of spice, from "none" to "xx hot." The last, it promises, "will jump on you and not let you go." When you approach the counter, a staffer will suggest ordering your chicken two levels down from the heat you think you can handle.

"It’s tasty first, then fire," says Carl Carbonell, who works at the legendary Nashville poster shop Hatch Show Print. "The only way to soothe the pepper burn is to eat more. It’s a cruel trick." At Bolton’s, the roadside spot, the kitchen staff debated over sizzling skillets how to best describe hot chicken’s spiciness. "First your lips go numb, and then your nose and eyes start running," says Angelika Delormier, a cook. Gerald Glover, the several-times-a-week-customer, tossed in a recollection: "I once saw someone fall over sideways in the parking lot. They lost their composure. It was hot."

There are rules to eating hot chicken. Dollye Mathews, the manager at Bolton’s, refuses to serve children under 12 years old without parental permission. "Do not touch your face or eyes," she tells a customer with a big chuckle and a wink. "And wash your face and scrub underneath your nails before you go to the bathroom." It is believed that drinking some milk before heading out for hot chicken, to coat the stomach, never hurts, either.

The rules at a chicken shop; their enforcers

There is general agreement on how hot chicken was invented. The story dates to the 1930s, when, it is said, an unhappy girlfriend prepared a spicy hot roasted chicken to punish her philandering boyfriend. She layered the hottest spices onto the bird in her plot for revenge, but the plan failed miserably as she watched her boyfriend savor and enjoy every mouthful. Together they proceeded to fine-tune the recipe and later opened a restaurant that specialized in hot chicken. (There’s another theory, less popular, that a group of bored Nashville ladies wanted to spice up their post-church Sunday lunches, which had become too boring and bland.) 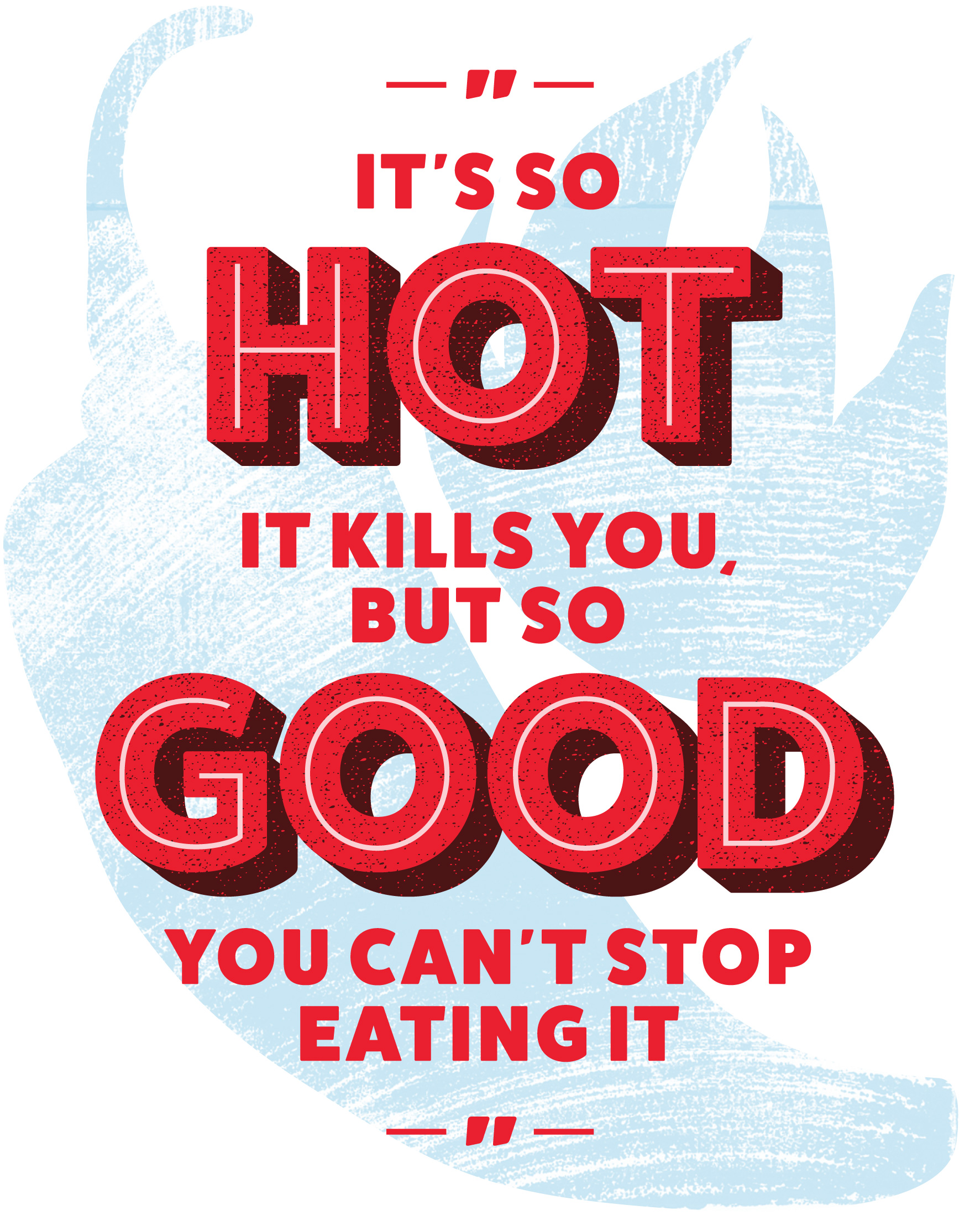 Since its creation at the peak of the Great Depression, hot chicken has become an essential part of life in Nashville. A product of the city’s African-American community, the dish’s popularity spread throughout the city. During the height of segregation, one hot chicken joint offered a special room in the back of the restaurant for white customers, to eat separately. Late-night weekend hours made the spots popular with the city’s music crowd. Rumors persist that back when audience members were permitted to bring a dinner to enjoy during at the performances at the Grand Ole Opry, the smell of hot chicken was prominent.

Some Nashvillians — Gerald Glover and Carl Carbonell among them — suggest that hot chicken is addictive. They might have a point. "For those new to hotness, there is a definite rush of the fight or flight hormones," says Dr. Dan Kalb, a family physician in the Nashville suburb of Franklin. "You may see an increased heart rate, sweating, heightened senses, a readiness to rush the woolly mammoth." Kalb is a confessed hot chicken obsessive. "The sensation can feel pretty uplifting," he says. "The endorphins rise, and there’s perhaps a little dopamine which is the addiction neurotransmitter."

In our food-obsessed current moment, hot chicken is moving beyond its roots. Sarah Gavigan, a self-described "rule-bending" Nashville chef has created an Asian-inspired hot chicken bun — fried spicy chicken with dill pickle and kewpie slaw on a bao bun. It’s a tribute to her hometown and also a nod to New York chef David Chang's iconic pork buns at Momofuku Noodle Bar. A Nashville pizza parlor has created a specialty pizza called The Kitty that is topped with hot chicken from a neighboring shop, blue cheese dressing, and jalapenos, and served with a side of pickles. 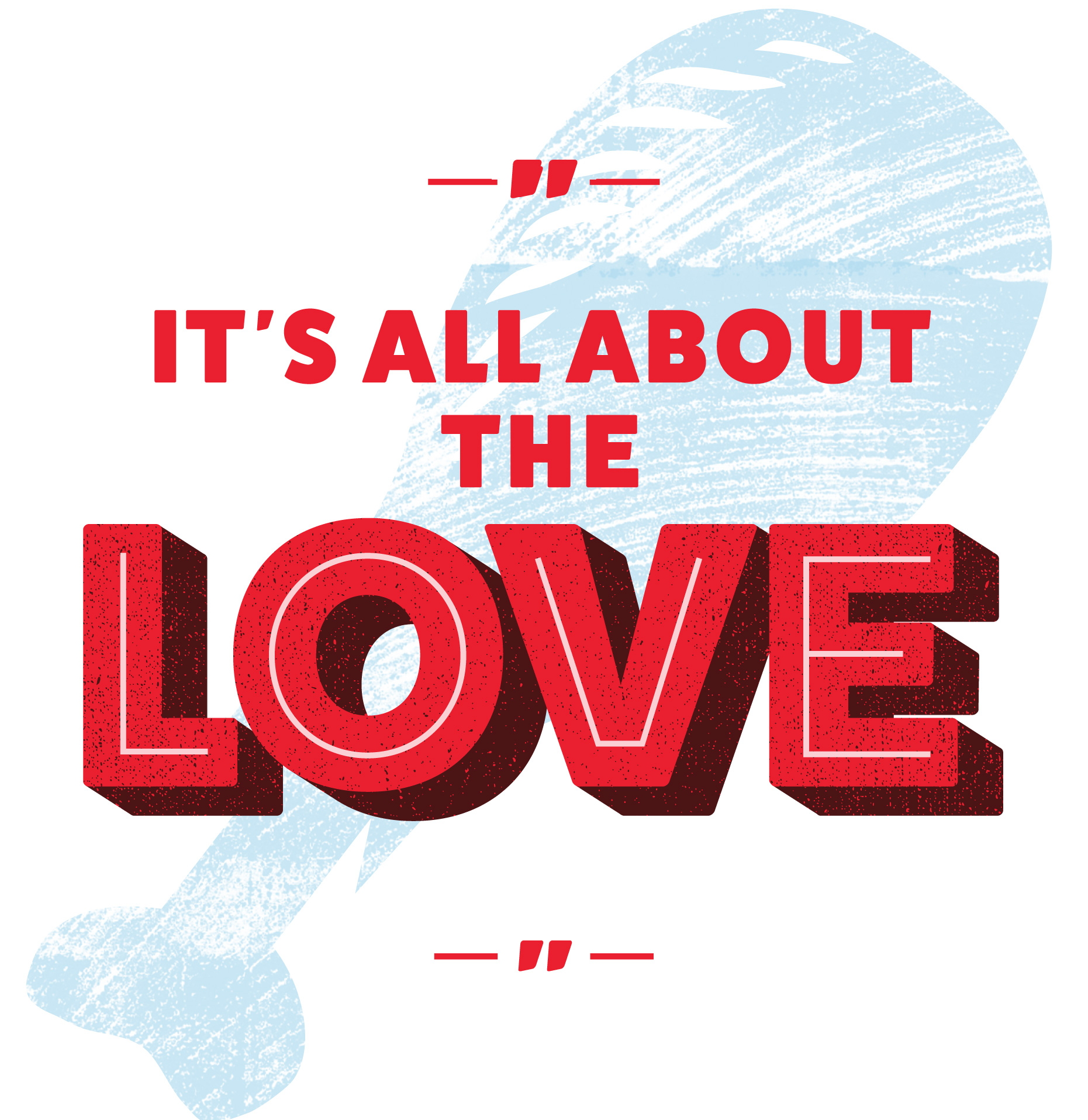 "We rejoice in folks duplicating and celebrating the past and the future," says Purcell, the former mayor and dedicated hot chicken enthusiast. "It’s a wonderful tribute to our city." Purcell volunteers with the Nashville Hot Chicken Coalition, which "was created to provide a platform for the education about this uniquely Nashville food, while also furthering the cause of Nashville Hot Chicken." It also helps but on the annual Hot Chicken Festival, held on July 4 each year.

"Ten years ago," Purcell says, "not all of Nashville appreciated the importance and the history of the chicken and how it is different, better, and transformative to life." Now they do.

This feature was produced in collaboration between Vox Creative and KFC. Vox Media editorial staff was not involved in the creation or production of this content.