Where to Drink In Montreal Right Now

Share All sharing options for: Where to Drink In Montreal Right Now

Share All sharing options for: Where to Drink In Montreal Right Now

Welcome to Vintage America, a column in which Eater Wine Editor Talia Baiocchi takes a hyperfresh look at all things wine related. 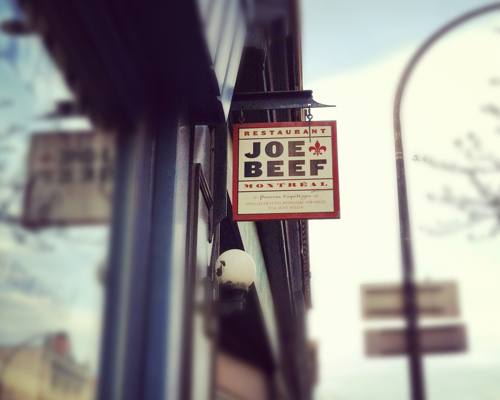 If there's one thing that sommeliers in any urban area in North America can envy about Montreal is its unwavering preference for the classic wines of Europe.

"You look at our customers, especially the older French-Canadian people," says David McMillan one half of Montreal's Joe Beef, a restaurant that's become a sort of mecca American chefs and other food obsessives. "You put a glass of big Australian Chardonnay in front of them and it's like 'Get this the fuck away from me—what is this?'"

For the American sommelier the thought of their audience—particularly the 40-60-year-old portion of it—shunning Aussie Chardonnay in favor, of say, Cotat Sancerre or Pépière Muscadet is nothing more than fodder for some sort of utopian fantasy.
"Even 10 years ago when we wanted to play ball [with bigger, more modern wines] like the rest of the world," says McMillan. "It never worked, so we just gave up."

Giving up looks good here, progressive even, especially now that the US is trying to turn down the volume on its wines and preferences are shifting within a small, but influential demographic of drinkers. Montreal may not have the diversity of wines that we have available here for a variety of reasons—mostly due to the fact that retail and distribution is controlled by the government—but they have conviction and a scene with a noted consistency of vision.

It's a town that has a point of view and one that provides plenty of fantastic, quasi-Parisian places to drink. Here's a quick guide to some of the best cafes, wine bars, and restaurants. Stay tuned for more on Montreal, wine, the stupidity of square plates, the genesis of Joe Beef and other very entertaining things in our interview with David McMillan, Frédéric Morin, and Joe Beef sommelier Vanya Filipovic later this week.