Welcome to Taking the Temperature, in which Eater checks the vital signs of various food scenes to find out what's exciting and what's DOA. Today: ramen in Philadelphia. 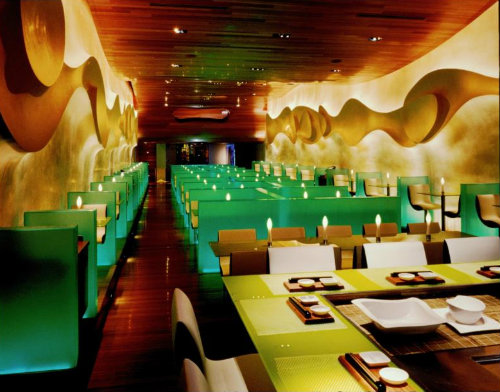 Morimoto, the place that offered great ramen before the boom. [Photo: Morimoto/Facebook]

It took a while — actually, it looked like it wasn't even going to happen — but ramen has finally arrived in Philadelphia. The city, which Eater Philly's Collin Flatt describes as not usually on the cutting edge of trends, has seen several ramen spots open up in the past year or so.

For some of the places, especially the early arrivals, the reception was a bit tepid. Food obsessives who had long bemoaned the lack of good ramen in the city jumped at the chance to try the new restaurants, and as it turned out, some of them hadn't yet gotten their chops up (case in point: Ramen Boy).

But "we're in a second wave" now, says Flatt, pointing to several businesses like Green Wasabi and Nom Nom Ramen, who according to him have been killing it. Two chefs from Matyson Restaurant recently hosted a pop-up that quickly sold out, as did the folks from Khyber Pass. In general, the local food scene seems enthusiastic about the whole matter, debating with fervor which ones nail it and which ones don't.

The most exciting part about it all is that there's a lot of ramen on the horizon: the Khyber team is opening up Royal Izakaya, which will serve plenty of ramen, the people behind Zento will soon have The Ramen Room, and the Matyson guys are going brick-and-mortar with a place called Cheu. The biggest signal that ramen has arrived is perhaps the news that restaurateur Stephen Starr is planning a noodle house. As Flatt puts it, "We didn't know if we could support this new movement, but I think the gamble has paid off."

So ramen was never a big thing in Philly?
We're not usually on the cutting edge with trends. We do have amazing pho,we're big on high-end hoagies and sandwiches, but on everything else, we tend to follow whatever is happening elsewhere. It takes about six months or more for things to catch on here.

Why do you think ramen in particular had a rough start?
We had wonderful Vietnamese hand-pulled noodle spots, but we didn't have ramen. The reason, I think, is that they have to stay open during lunch hours to make money, and we just don't have a big Japanese population in Philadelphia.

How'd it catch on?
The food obsessed here started talking about the lack of ramen, and it sort of reached a fever pitch where operators decided that maybe they should do something with it, especially those restaurateurs with Japanese ties.

In the last year, we've seen about six to eight places, with more on the way. Some haven't done so well, but others have really killed it. These are dishes that require lots of time, attention to detail, and dedication. Food costs aren't high, but it takes skill.

We're kind of in a second wave now. The first wave had a lot of places go away, because they opened up too quickly and food cognoscenti who knew what they were talking about would go straight to the internet and criticize the places and, rightfully, compare them to other great ramen shops in the States. They didn't cut it.

Who are the pioneers?
Morimoto has long had some types of ramen on his lunch menu, I should point out, but few people knew about it. It is still fantastic.

The places that came after that are Doma, which was solid. After they opened up, we saw Yakitori Boy, one of these Japanese tapas restaurants, open up Ramen Boy. That didn't go so well. The ramen spot Terakawa, though, which is on its way from New York, is taking over that very space.

Then we saw a couple of non-Japanese kids from Matyson Restaurant do a pop-up, Roundeye Noodles, which sold out really quickly, despite the fact that Japanese people found the name really offensive. The second one they put on was to raise funds for a noodle bar, which will be Cheu.

The guys from Khyber Pass also did a really popular pop-up, but they are now going to open up a ramen shop called Royal Izakaya.

The owners of Zento are opening up a place called The Ramen Room, and Stephen Starr is also planning a noodle bar.

What are your favorites, though?
Nom Nom Ramen opened up, and they were one of the first to really take it seriously. They've done extremely well. That's the one that I'd point out as doing the best work.

Green Wasabi is also excellent! They are hardcore.

Any last words?
We didn't know if we could support this new movement, but I think the gamble has paid off. I'm seeing more and more PR announcing ramen-related projects. I really think that by the end of this year, we will see at least ten to fifteen ramen shops in the city. Not to mention many restaurants in the city offering ramen on their roster.

One thing is for sure: people here have already proven that they won't support places that don't cut it, so we'll probably be seeing some very solid ones in the future.