Six Pizzas in Rome That Will Make You Forget Naples

Share All sharing options for: Six Pizzas in Rome That Will Make You Forget Naples

Share All sharing options for: Six Pizzas in Rome That Will Make You Forget Naples

Welcome to Taking the Temperature, in which Eater checks the vital signs of various food scenes to find out what's exciting and what's DOA. Today: Pizza in Rome. 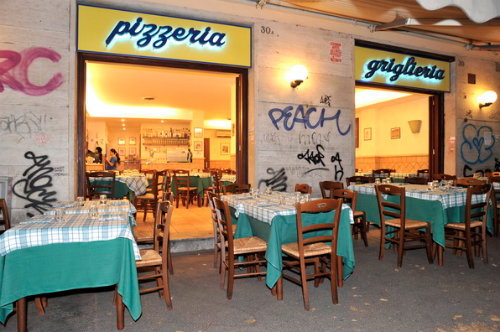 When the subject of Italy and its pizza comes up, your mind likely immediately shifts to Naples, Da Michele, and tradition. But in the last few years, exciting things have been happening in Rome, making the city a pizza capital in its own right. It's thanks to a simple formula: an emphasis on quality ingredients, risky toppings, and creating a pleasant sit-down dining environment with fine booze to go along with your pie. In the following interview, local food writer and historian, blogger, and dining app editor Katie Parla talks about how pizza has evolved in her adopted city and shares the key spots in the movement.

How unremarkable did pizza used to be in Rome?
Pizza in Rome as a genre is a postwar thing. You had just a lot of small places that would do pizza in a wood-burning oven, some fried stuff, beans and oil or beans and onions, and then the crispy pie that wasn't particularly special or made with good ingredients. Roman pizza was always cheap.

What changed that?
Well, a few years ago Giancarlo Casa opened La Gatta Mangiona, which was then followed by Pizzarium by Gabriele Bonci. As a result, people in Rome began to think of pizza as a gourmet product, one worth investing in and pairing with good wine and beer.

What kind of Pizza do they do?
Casa's is a Neapolitan style, so thick rim, with an elastic center. His ingredients are sourced from small producers, like a lot of interesting cheeses from northern Italy and great meats. He's got this place in Monteverde with a cult following, and like most pizzerias in Rome, it's only open at night. He's got this incredible grappa list and whiskeys and craft beer and wines. So instead of having shitty pizza with Peroni, Romans started having really good quality pizza made from organic stone grounds, wheat, and with nice cheeses, good toppings.

And Bonci?
Bonci, on the other hand, serves pizza by the slice. He's turned that once-crap genre — and also street food genre — and turned it into something great. The prices really vary, in the sense that grandmas can come in with their grandkids and have a regular slice, or politicians with unlimited funds can go and have the pizza with foie gras, honey, and walnuts.

Give me some more names.
La Fucina, which is Edoardo Papa's place. He has a slightly different approach, using a focaccia base and lots of raw toppings — smoked salmon, aromatic herbs, different types of stracchino, and things like that.

Other great ones are Sforno, Tonda, and La Pratolina. All of the places that I've mentioned are outside of the center, sort of in the peripheral neighborhoods. They're definitely for Romans and not tourists.

Are there any others?
These are the key ones. They've become the food destinations for people that aren't interested in just getting a quick option but want to go and enjoy something more thoughtful.

How do these pizzerias stack up to the big guns in Naples, and how do people in Italy view the two?
Neapolitan pizza is still regarded as a superior product, but it's also a totally different genre and history. There are hundreds of years of tradition there, and pizza in Rome started out as a cheap peasant food after the war. In Naples, the famous pizzerias have been owned by the same families for years, and they all have a generally classic approach to things. Places like Da Michele and Di Matteo and most of the others are doing traditional pizzas, sometimes with good products and sometimes with not so good products, and they keep the prices really low because it's still peasant food down there.

Do you think the places you've talked about are as good or better than those in Naples?
They're not better, they're different. La Gatta Mangiona, Tonda, Sforno are Neapolitan style, but because they are in different areas and they use different flours and the yeast will change because of that, they yield different flavors and aromas. Those pizzerias emulate the Neapolitans, but it ends up being different. And the ingredients tend to be more creative in Rome.

Any last words?
American journalists are still talking about really crap places in Rome, but any Roman will tell you that the ones that I've mentioned are the way to go.