Veer only slightly away from the spring breakers and all-inclusive resorts of San José del Cabo and you'll find a rare thing: a Mexican region where one can get well-prepared specialties from all over the country. So says Adam Goldberg, the blogger behind the website A Life Worth Eating, who has been all over Mexico in the past couple of years.

After eating his way through the country, there's really only one thing he bemoans about the way dining works there: it's usually difficult to visit a region and go beyond its local specialties; in some cases, you can find yourself exhausting your options and repeating yourself too quickly. In San José, however, that's not the case, and you wouldn't know it if you did as most other tourists, spending time on the beach and limiting yourself to your hotel's offerings. But take a ten minute drive and you can find all sorts of pleasures, including extremely flesh clams, barbacoa, Mexican-Japanese fusion (that is actually quite good), and refreshing raspados, or shaved ice. In the following interview, Goldberg shares his favorites:

Tell me about why you're excited about San José del Cabo?
It's a funny place, because it's almost like going to Las Vegas and then going to Reno to eat. It gets completely eclipsed by the tourism of Cabo San Lucas. It turns out that San José has some really good eating, and it's only twenty-five minutes north.

How'd you find out about it?
My girlfriend grew up in San José, and that was the gateway to this for me. Baja wasn't really a state until about three decades ago, so what you have here are really good roads, clean drinking water, and slightly better internet. That newness also carries over to the food, in that it's sort of a coherent patchwork of all the cuisines in Mexico. Usually, it's so regionalized that it's hard to get something good that isn't a specialty when you're in a state.

Have people figured it out yet?
I'm not so sure. I think most visitors stick to the all-inclusive resorts and don't leave. Not too many people know that there is really great eating here.

How far do you have to go to get to most of these places?
Maybe a ten or fifteen drive from the resorts. What makes it so interesting to me is the dichotomy between this great local scene that is eclipsed by the spring break scene.

Now tell me about the food.
I'll start with the chocolate clam, which I discovered here. They are served live, shucked right in front of you, and when you squeeze lime on it, you see the clam retract a bit and you eat it. When they're not really fresh, they won't move, and you send them back. They come from the Pacific coast of the Baja, and they're transported every morning to different roadside stands. They're incredibly inexpensive and incredibly mineral rich. You should go before 11 AM or noon. 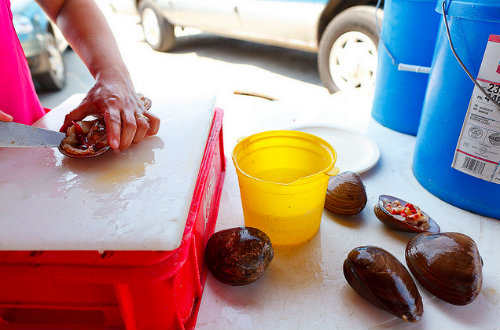 The other thing that popped out at me looking at your website was the Mexican-Japanese fusion.
It's very interesting in that it's distinct from American fusion. You won't find California rolls or anything like that. They make their own sauces, like a great cilantro one. They're very into incorporating fruit in a way you don't see in the U.S.. They have an excellent way of balancing sweet and savory.

What makes it different from fusion in D.F., for example?
The biggest difference is the availability of fish. It's very difficult, for instance, to get dorado in D.F. Also, whenever you move towards the center, it seems like all of the rolls are filled with cream cheese. I'm actually looking a sushi menu now from a place in Puebla, and eleven out of the thirteen rolls have cream cheese in there. The ones that I think are the best are in Cancún or San José, because of that fresh fish availability. It's not trying to be authentically Japanese at all, but it's really good food. 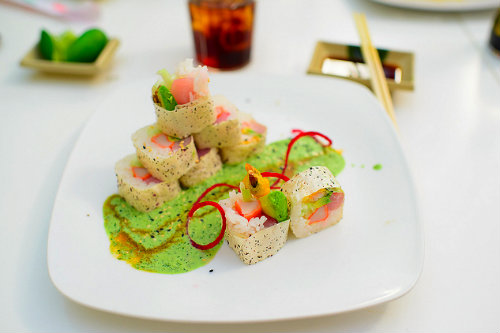 Any last words?
The big thing for me is that there is a little bit of everything. You can get great mole, great seafood, great land dishes. I've been spending lots of time in Puebla, but once you reach beyond the specialties, it gets tough. That's a recurring theme in Mexico, and it's quite tough to find a place that has a bird's eye view. It's a conglomerate.

For all of Adam's restaurant and food photos from Mexico, visit his Flickr page.