of the band's drummer, Harrison Haynes.five favorite North Carolina restaurantsBands with dinner reservations this season include Sharon Jones & The Dap-Kings, Kid Sister and Flosstradamus, Les Savy Fav, YACHT, Final Fantasy, and MEN. Next up, Les Savy Fav. To whet your appetite, we present the

. On each episode, Sam Mason, the tattooed and celebrated NYC chef (Tailor, WD-50), invites a band to his Brooklyn loft, where he shows them how to add his signature culinary spin to their favorite "on-tour" food. While they cook, Mason and the artists converse on food, music, and life. After they "chow down," they "get down," as each act takes to the loft's stage to play a rockin' musical set.Tuesdays at 11 pm ET/PC on IFCWho's ready for the first-ever, indie-music cooking and talk show? Good, you're in luck. The new, six-part IFC original series, "Dinner with the Band," is now playing 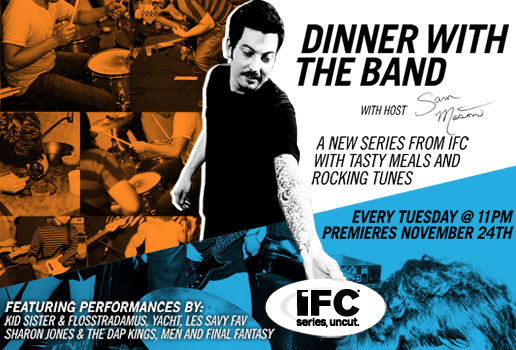