Share All sharing options for: Latin American Restaurants Catching on in Hong Kong

Share All sharing options for: Latin American Restaurants Catching on in Hong Kong

Welcome to Taking the Temperature, in which Eater checks the vital signs of various food scenes to find out what's exciting and what's DOA. Today: Latin American restaurants in Hong Kong. 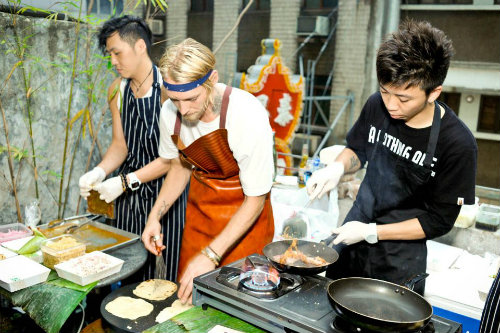 Latin American food is starting to make its mark on the Hong Kong dining scene in promising ways. So says Janice Leung, HK native and the blogger and critic who runs e_ting in Hong Kong and has helped with Eater's Hong Kong Heatmaps. According to Leung, a number of happenings and openings in just the last few months have allowed for Latin American restaurants — mostly Mexican or Tex-Mex, for now — to finally have a foothold in the city's dining scene, and the trend looks to be more stable and lasting than was the case with earlier attempts. It is similar, in many ways, to the recent Latin American push happening in Paris, with taquerias like Candelaria that never would have figured into that city's restaurant culture before.

The positive turn in Hong Kong is due to a couple of forces: for one, the Mexican consulate general is making a serious push to get ingredients into the city and to support Mexican businesses. And two, ex-pats from the U.S. and elsewhere have long bemoaned the lack of quality Latin American food in Hong Kong. In the following interview, Leung fills us in on what's been going on and the places worth checking out.

So, you say Latin American food is popping up in Hong Kong. What's going on?
Basically, it's never really existed in Hong Kong before until very, very recently. I think it's just a geographical thing, because South America is so far away and we haven't had many people move here from that area of the world.

It is, however, starting to become a topic — something that people are talking about here.

How come?
There's a yakitori restaurant, Yardbird, which I actually put on one of the Heatmaps I did for Eater. They actually did a pop-up with tacos for one night. I've never seen lines like that, and it's because you really can't get that food here. If you ask me, that's what sparked it, and it was only months ago.

And what places have opened since then?
There's a place called Tacochaca that does more of a Tex-Mex thing.

Then there's Brickhouse, from a Texan who doesn't want to do Americanized Mexican food. He does homemade, hand-pressed tortillas and goes to great lengths to do things the right way.

Recently, at the Four Seasons Hong Kong they hosted the chefs from the Four Seasons Mexico. They set up a ten-day menu that was extremely popular. It was actually supported by the consulate and the government.

I spoke to the people at the consulate general, and they're actively looking into the best ways to support Mexican businesses in Hong Kong and, most importantly, how to bring in ingredients and products that are essential to the cuisine and usually impossible to find. For a few years, there wasn't a consulate general at all, but now they're really making an effort.

It seems like it's more Mexican than any other South American or Latin American culture. Are there any other spots?
Yes, there's also a Peruvian place, Chicha, which just opened. It's in Central, so it's an easy location, and they're doing lots of ceviche. Time Out wrote about them recently, and it's looking quite positive.

Have people in Hong Kong started to pick up on and embrace this?
In the ex-pat community, it's become a really big thing. People from the States always point out that that's the big thing that's missing from the food scene.

It's probably going to take longer for the locals to get used to it, because it really is completely foreign. I grew up here and don't remember any significant South American or Latin American restaurants, save for a couple of Argentinean steakhouses.

What are they?
There's one called Tango, which opened a few years ago. Then there's an older one called La Pampa that's always been considered a hidden gem — beloved place.

Do you think this movement is a flash in the pan or does it look strong enough to last a while?
With trends, you always have a boom and a bunch of places that end up failing because they're not that great. I'm very confident that this will continue and result in a lasting impact on the dining scene in the city.