For reasons unclear, Bravo did not air a new episode of Top Chef Masters last night. That doesn't mean chef Eddie Huang gets the day off, though. Here now, an extra-special map: Eddie Huang's best post-blunt food across America. 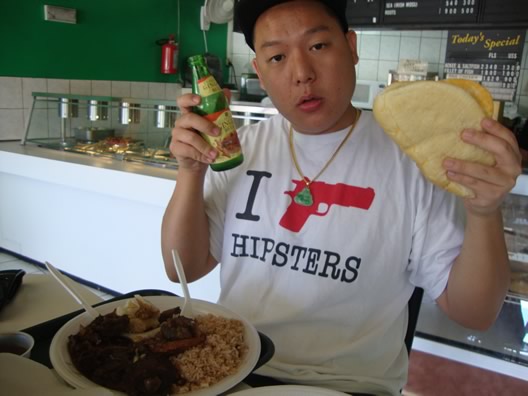 So, I've been seeing all these lists of stoner foods on other sites written by people who are clearly not high enough. Any Eater list by ya boi boi Greg Morabito featuring 137 Rivington is official, but if I'm high, I don't want nuthin' fancy. The kids don't want And-1 mixtape food, just go H.A.M.M.E.R. Obviously gummy bears and chairman baos are always tops in my book, but we wanted to let these other people live so, the usual suspects were disqualified.

Funny thing about the list, I looked back on it and said to myself, "There is some shitty ass food on this list that I would never eat sober." Mission accomplished. If you a 7 days a week, twice on Sunday, I got hash, ear wax, a Roor, volcano, and dutches in the drawer type mother fucker, this is your list. We goin' in.

21) Dixie Crossroads - Titusville, FL
This place is the real Bubba Gump Shrimp if it ever existed. Best Southern Seafood shack that specializes in scrimps. They have fried clam strips, which rank on my list of Awesome Stuff somewhere between money and pink nipples. Yea, I really like clam strips; I like hush puppies too and they have powdered sugar at D.C. which is strange but awesome. Don't stray from shrimp, catfish, clam strips. If you order chicken alfredo, you're probably a Japanese businessman that got accidentally teleported to the Gulf.

20) Corner Bistro - West Village, NY
[Eater editor] Raphael hates this. He hates Corner Bistro with a passion, but when I asked him when he went he said, "Lunch". LUNCH? LUNCH, Raphael? You can't go to Corner Bistro for lunch! You go when you find yourself on one of those nights where someone convinced you to take them out to Meatpacking and that fucking house music made you want to shoot your dick! Next time you try to drag me out to MP, remind me that I might shoot my dick by the end of the night and that does neither of us any good. Then you eat a burger. And it's cool. Leave the gun, bring the fries.

19) McRib - Worldwide
[Note: the map points to the original McDonald's in Chicago.] The McRib is fucking international. You already know, this is the unicorn of fast food. The G-train if you will. It hardly never comes, but when it does life and the outerborroughs are awesome.

17) Sandy's Lechoneria - Harlem, NY
This is my favorite cuchifrito. Fried pork, ox tails, tostones, and they got the ill homemade hot sauce. They sell you meats by the pound so you can mix and match. I love options when I'm high cause I can't commit to shit.

16) Gus's World Famous Fried Chicken - Memphis, TN
I went here last year on my way to see John T. and the rest of the SFA. They do perfect down and dirty Southern Fried Chicken. It isn't table cloth blue ribbon fried chicken (which is dope, but different). The trademark of their chicken is a touch of red pepper. It isn't cursory, yet, it isn't spicy either, the pepper is used as a seasoning which I love. Don't let chili over power the other work you've done. P.S. DO NOT GET THE DIRTY RICE. The waitress there kept telling me to get the dirty rice, probably because I look like I love rice and kept asking me how awesome it was so I did a 180. I told her how awesome and authentic and amazing and better than fried rice her dirty rice was and now she thinks her dirty rice is awesome, but clearly it is not.

15) Jack in the Box - West Coast
[Note: the map points to a Jack in the Box in LA.] Tell your jokes, but this is the best fast food when high if you are in a Honda Civic with 8 people in it. No one ever agrees where to go, but Jack in the Box has everything: burgers, terriyaki, mexican food, car antenna toys, etc. None of it is good. Not a single item on the menu is good, but somehow it's consistently awesome and pleases every one.

14) Esperanto's - Saratoga Springs, NY - Skidmore College
You come here for the doughboys invented by Sheldon Solomon. My cousin, Patrick Shen, directed this movie Flight from Death that Sheldon was in which is how I found out about Doughboys. It's a religion at Skidmore.

13) Arturo's Clam Pie - NY, NY
No one picks Arturo's as the best slice in the city and it's not. I like the old Totonno's, I like the Sicilian at Artichoke, but the slice I eat most when high is the clam pie at Arturo's. Clam sounds complicated, but it's not. It actually has less going on in terms of flavor than other pizzas. When I'm blazed, I want a white pie w/ clams and garlic, king me.

12) Piroshky Piroshky - Seattle, Washington
Yo ma, let me get 2 beef & onion, 1 potato cheese, and 1 chicken rice cause you know I can't say no to rice. For the uninitiated these things are like Russian Empanadas. Ask any pimp, Russian is always better, bring me that hot towel shawty. Ahhhh, Spitzer I got you homie!

10) Great NY Noodletown - NY, NY
They're open past 3am most nights and have all the Cantonese staples. I'll get the seafood pan fried noodles if I just want to be a retard, but most of the time it's wonton noodle soup with roast duck and char siu pork.

9) Black Bean Deli - Orlando, FL
Oh shit, what do you know? Orlando is good for something besides Chinamen and letting $100 million dollar NBA Centers go. People will tell you to try the Cuban and you can't go wrong, but I never stray from the Pan Con Lechon: straight pulled pork with mojo on bread. Grown-man B.I.

8) Bellagio Buffet - Vegas
This is tradition. The day I'm leaving Vegas, I get a late afternoon flight, shoot some morning craps, blaze around 1pm and just go ape shit at the Bellagio Buffet. Look, sober, this shit sucks, but if I'm sober, I'm cruising over to see my boy, Akira Back at Yellow Tail yaknowwhatimsayin? High, Bellagio Buffet. One of the tenets of stoner food, quantity over quality all day.

7) Shopsin's - NY, NY
Mac 'n Cheese Pancakes, the ABC (chicken schnitzel, grits, sausage gravy, and eggs), hash, taco fried chicken, I mean, tell me when to stop. The only hesitation listing them is that Kenny is going to want to shoot me for listing Shopsin's cause he doesn't want any new customers. Plus, Zach would rather play kickball than serve a party of 5 so go fuck yourself. Bonus fact: Me, Zach, the old chef from Sushi UO, and the Dash Dogs guy all live in the same bullshit Chinese tenement building. For good pancakes outside Shopsin's, try Pamela's in the 'burgh.

6) Ill Laboratorio Gelato - New York, NY - tied with Dave & Andy's Ice Cream
Ill Laboratorio, these mother fuckers are evil geniuses. I feel like they take an idea "grape", what is the core of "grape"? Not the "flavor" of grape, but like the essence, what is "grape"? They take ice cream to that strange philosophical, I can't follow but you all have snub noses level and they nail it every time. You taste it and you say to yourself, "If I was an ice cream scientist and wanted to teach aboriginals in the rain forest what 'olive oil' is I would show them this ice cream." They boil flavors down to an ideal. Yea, I'm a fucking fan.

5) Dave & Andy's Ice Cream, Pittsburgh - tied with Ill Laboratorio Gelato
This is a question I ponder frequently while high. Who has the best ice cream? Dave & Andy's in Pittsburgh has the best old fashioned ice cream in the world bar none. How good is it? In the dead of winter, -20 degrees, people line up to eat this ice cream. They make waffle cones on site every day and they're like Rhianna's ass, I get fixated, I start involuntarily shuffling my feet, and I'm in the trap. The ice cream is thick, heavy, creamy, and the flavors are in your face. Mike Tyson of ice cream.

4) Zingerman's - Ann Arbor, MI
New York, I love you, but your corned beef is bringing me down. Zingerman's can't touch the smoked meat at Mile End or pastrami at Katz's, but they have a better Reuben and that's my shit. They have crusty bread with pillowy soft interiors, perfect corned beef, and great cheese. Everything there is crack. When I used to go watch Wolverine's games, my ex would meet me at the airport with a Reuben, I'd bring sandwiches to the game and I'd eat another on the plane. Crack.

3) Jim's Steaks - Philadelphia, PA
This will catch me a lot of hate mail, but Chinamen ain't never lied. I like Jim's, wit onions, wit whiz. Copped my first cheesesteak after getting a pair of OG Jordan V's across the street. Jim's FTW.

2) Cake Man Raven - Ft. Greene, NY
I'm not a big dessert fan, but when I think cake, I think of those white cakes my mom or neighbors would make. You high as shit going in your neighbor's fridge. There's a vanilla cake with cream cheese frosting just sitting there. You don't know where the forks are, it's your turn to play Golden Eye next, so, you take your hand and shovel a piece of that fucking cake in your mouth, close the door, wash your hands and blame someone else. That's fucking dessert to me and Cake Man does that cake the best. White cake with pineapple cream cheese frosting. That's my shit. I also like the Neopolitan with red velvet, pineapple, and coconut when I'm too blazed to make a decision.

1) The Original aka "The O" - Pittsburgh, PA - University of Pittsburgh
WHAT UP YINZ? Yall knew that somehow, someway, one-day, I would represent for that long forgotten town of yours. The Pirates suck, no one watches hockey, and Jamie Dixon stays choking in March. Well, here it is mother fuckers, #1 with a bullet, literally, The Original. Freshman year at Pittsburgh I held down Tower C cause I had the hook up for drank at The Original while other kids were begging homeless people to buy them Saranac. They have the best french fries and foot long hot dogs on the planet. Kenzo Digital says, "You gotta put the egg on the burger son, you need a nipple on that joint!" Plus, if you're coming down, there is no better place to re-up. The Original: Hood Champ. #undefeated

Eddie Huang's Favorite Smoking Song: Luniz's I Got Five on It