Welcome to Taking the Temperature, in which Eater checks the vital signs of various food scenes to find out what's exciting and what's DOA. Today: craft beer in Chicago. 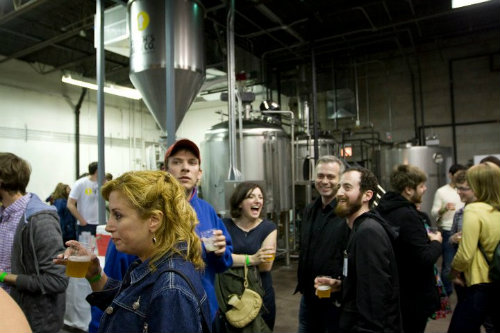 Today on Taking The Temperature, Eater Chicago editor Ari Bendersky gives an overview of the best craft beer companies in his city and the restaurants that carry their brews. As Bendersky explains, the boom owes a lot to Goose Island Brewing, the company that popped up over two decades ago and was eventually acquired by Anheuser-Busch.

In the years since, there's been a steady stream of smaller breweries popping up in and around town, including Revolution, Three Floyds, and Half Acre. In recent months, places like Pipeworks and Greenbush have extended the trend. And now, it's almost obligatory for new restaurants around town to offer an extensive menu of craft brews.

Sure, you can confidently say that craft beer continues to boom all around the U.S., but the pace in Chicago is pretty remarkable. It's also particularly interesting to note the spirit of collaboration that exists in the city, with restaurants working together on events and exclusive beers with both local and international breweries. Grant Achatz's Aviary, for instance, recently hosted the folks from Mikkeller in Copenhagen, while local chefs Stephanie Izardand Danny Grant have both worked on dinners with local breweries. Lagunitas recently came out with a special brew for Paul Kahan's restaurants, and City Provisions Deli continues to carry exclusive beers from several small companies.

Tell me about craft brewing in Chicago.
First, I should point out that the Brew News tag on Chicago is the place where we post every beer-related piece of news for the city. I'm not even sure I've been to 100% of all the places that have opened up or are on their way. It's that many.

But for a more succinct overview...
Chicago has always been a brewing city. Before Prohibition, there were a number of smaller — I wouldn't call them "craft" — breweries. Then Prohibition hit. Then, Goose Island started brewing about twenty or so years ago. They now have two brewpubs in the city. That powerhouse was then bought by Anheuser-Busch. I mention Goose Island because a lot of people that worked there have gone on to open up their own places in the city. There's Jim Cibak, for instance, who has Revolution Brewing.

So, in the last five to ten years, we've seen an emergence of smaller craft brewers. There's such a huge demand for it, because people want what you can get in Portland, San Francisco, and Brooklyn.

What are the standouts, in your view?
Half Acre beer company is really stellar, and they're growing really fast. There's Metropolitan Brewing, and then Three Floyds out in Munster. Three Floyds is really amazing. They have a number of different styles, including Dark Lord, which is a Russian imperial stout that only comes once a year and people go crazy for.

I can't forget to mention Piece Brewery & Pizzeria: they've been around about ten years and have won nearly every award imaginable.

We also have Two Brothers, which is about forty miles outside of the city, and Finch's.

There's a lot of collaboration between the restaurants and the breweries.

I was going to ask: if you take St. Louis, for instance, there are lots of craft breweries that host parties, give tours, and even have food trucks parked outside. Is that the case in Chicago?
Most of the time, it's distribution. Some of the places do offer tours, but the facilities aren't that large. Goose Island definitely does tours and Half Acre has a tap room where you can drink and buy merch and retail items.

And the restaurants with the best craft beer selections?
Publican for sure. Hot Chocolate offers some rare choices, The Bristol has great local beer, there's the Girl and the Goat. I would say that most of the places that have opened in the last two or three years really emphasize local beer.

Soon to open are New Chicago Beer Company, as well as Argyle and Broad Shoulders.

Finally, do you think there's anything about these places that makes them distinctly Chicago?
I don't know if there's a style that is particularly Chicago, but one thing I do see lots of people who have come out of Goose Island going on to do their own thing, and a lot of collaboration, which makes them really special. It's a nice community.