Welcome to Drinks Decoded, a column dedicated to exploring how the country's best cocktails are made. Up now, the Matcha Ado About Nothing at Gracias Madre in Los Angeles.

by Hillary Dixler Canavan@hillarydixler May 27, 2015, 10:08am EDT
Photography by Elizabeth Daniels | Via All Drinks Decoded Coverage on Eater [E]
2 comments / new

"I want to be Dr. Seuss" says acclaimed Los Angeles barman Jason Eisner. And at Gracias Madre —the organic plant-focused Mexican restaurant in West Hollywood where Eisner serves as beverage director — he gets to do just that. Eisner's cocktails share some hallmarks. Drinks are organic and vegan, call for interesting ingredients and most incorporate agave-based spirits. But they are also "fun and strange and off-the-cuff," explains Eisner, allowing him to approach bartending with a sense of play. The result of all that whimsey is a drinks menu with a "boozy popsicle" of mezcal and blood orange and the Matcha Ado About Nothing, which lives somewhere between matcha latte and spiked bubble tea.

"I started thinking about the flavors and aromas of matcha," says Eisner of the inspiration for the Matcha Ado About Nothing. "It's super delicate and earthy and it would pair well with agave spirits." He met with Art of Tea owner Steve Schwartz and found a kindred soul ("he talked about matcha with the passion and vigor that I feel about agave spirits"). Eisner also had another idea brewing: "I'm a huge fan of boba tea drinks and I wanted to find a way to make it a cocktail." The seeds were planted, all he had to do was figure out how to blend matcha, boba and booze. "I like to play like a chef, so I wondered 'Can I make my own tapioca pearls?'"

But even with a cocktail as playful as the Matcha Ado About Nothing, Eisner maintains the "rules" of Gracias Madre — the components are vegan, organic, and, whenever possible, made in house. For the booze, Eisner went for 123 Tequila Blanco, which is produced from estate-grown organic agave and sold in handmade recycled glass bottles with a local artist-designed soy ink illustration on recycled paper for the label. Its earthy flavors of stone fruits and minerals match the ceremonial grade matcha Eisner sources from LA-based tea importer, Art of Tea. Using the green tea powder, Eisner creates a sort of matcha latte from housemade coconut milk and housemade almond milk. He adds a generous pour of tequila to that "latte," and then transfers the mixture to a glass with housemade tapioca pearls that have been cured in edamame syrup. "I wanted to pay respect to matcha with a balanced drink that allows tequila, which for me is the belle of the ball, and the matcha to both shine and work together in a harmonious way."

See how it comes together below: 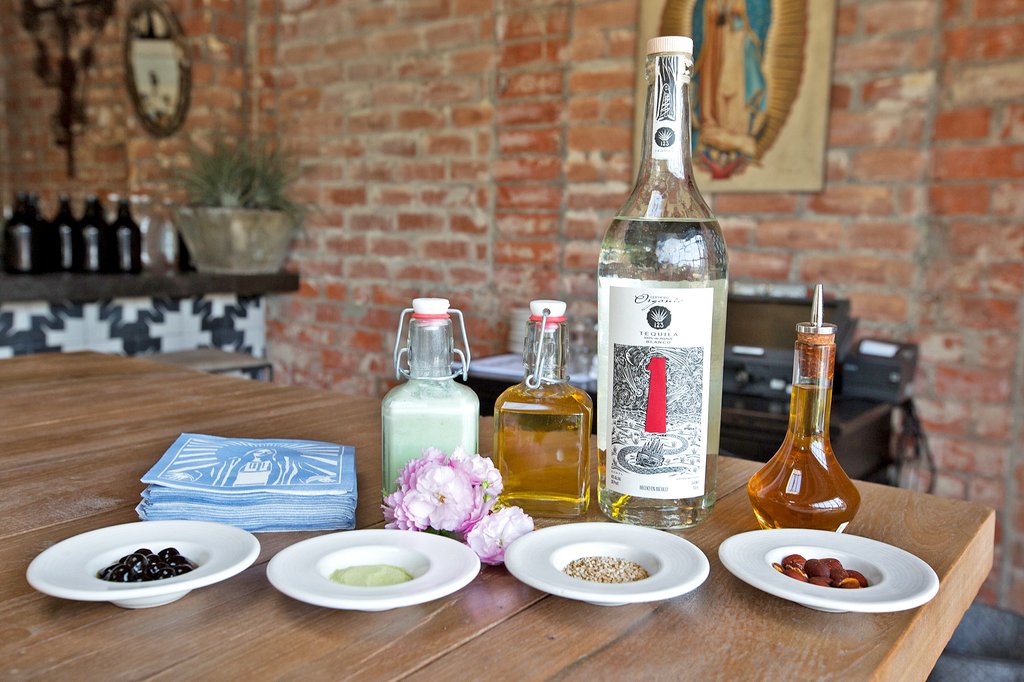