Welcome to Drinks Decoded, a column dedicated to exploring how the country's best cocktails are made. Up now, the House Bloody Mary at Belcampo Meat Co. in Santa Monica, CA.

California's ever-expanding Belcampo Meat Co. is known in Los Angeles for humanely raised meats, expert butchery and, at the Santa Monica location, a very buzzy brunch. Bar expert Josh Goldman of Soigné Group was tasked with designing a cocktail menu for the restaurant, and when it came to brunch he knew the menu "had to have a good quality Bloody Mary." He continues, "The hallmarks of any of our cocktail programs is that they all have to feel genuine, and have a place of belonging. We have to mimic what Belcampo is doing with their food program ... this is a meat company."

"If we can't get you a cocktail out in a reasonable time, then what the hell's the point?"

The first thing Goldman addressed while creating Belcampo's House Bloody Mary was his own preference regarding cocktail texture: "For some reason, first thing in the morning, when I really want a Bloody Mary, that's really not the texture I'm looking for." To create a smoother-drinking Bloody, Goldman makes clarified tomato water. And from there the advanced bar techniques keep coming. Instead of simply adding vodka, Goldman uses a fat wash, infusing vodka with Belcampo's bacon and a secret umami weapon, porcini mushroom powder. In place of the usual celery stick garnish, Goldman adds celery juice ice cubes. He also drops in a house pepper tincture to add a more spicy yet floral character to the cocktail. Finally, the showstopper: candied bacon. All told, it's about two days worth of prep.

If this sounds like a lot of work for a Bloody Mary, it is. But Goldman points out that this work doesn't happen in service. "One of the reasons it's so prep intensive is because I don't want the build to be intensive at all," he explains. Brunches are busy. "A lot of people have the conception that craft cocktail is a 20 minute cocktail. That's not true. That's not how we do them. If we can't get you a cocktail out in a reasonable time, then what the hell's the point?"

Below, a look at how the Belcampo Meat Co. House Bloody Mary comes together: 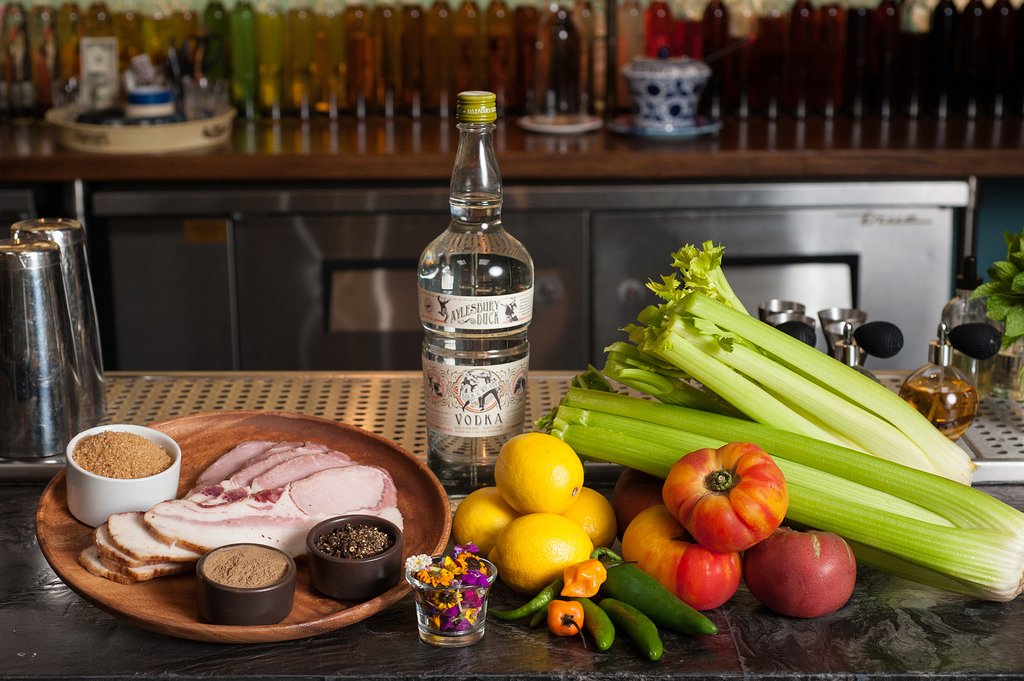