Drive through East San Jose and you’ll find a familiar American landscape: strip malls and franchises, highways and subdivisions. You could be almost anywhere, except for the occasional palm trees, the Diablo mountain range in the distance — and the increasing number of signs written in languages other than English. Because this part of northern California, particularly the few-mile stretch between Story Road and Tully Road, is the home of a thriving Vietnamese and Asian American community.

Like most stories about Vietnamese people in America, this one begins with the fall of Saigon on April 30, 1975. Thousands of refugees, fleeing persecution and reeducation camps, arrived in the United States via Camp Pendleton, in Southern California. The federal government tried to resettle refugees in towns across the country but enclaves formed in warm-weather areas: Los Angeles, Houston, New Orleans, and San Jose. The most famous Little Saigon is in Southern California’s Orange County, but San Jose now boasts the greatest number of Vietnamese residents in any one city outside of Vietnam—estimated at more than 180,000 today. It makes sense that so many refugees were drawn to California, which was already home to many Chinese, Japanese, Filipino, and South Indian immigrants and their descendants. While these cultures are all distinct, they shared some staple ingredients and, just as importantly, the understanding of what it means to be have emigrated from Asia. And it makes sense that in the 1980s many Vietnamese refugees headed toward the growing Silicon Valley, where a booming tech industry offered ample manufacturing jobs and opportunities for upward mobility into engineering fields. 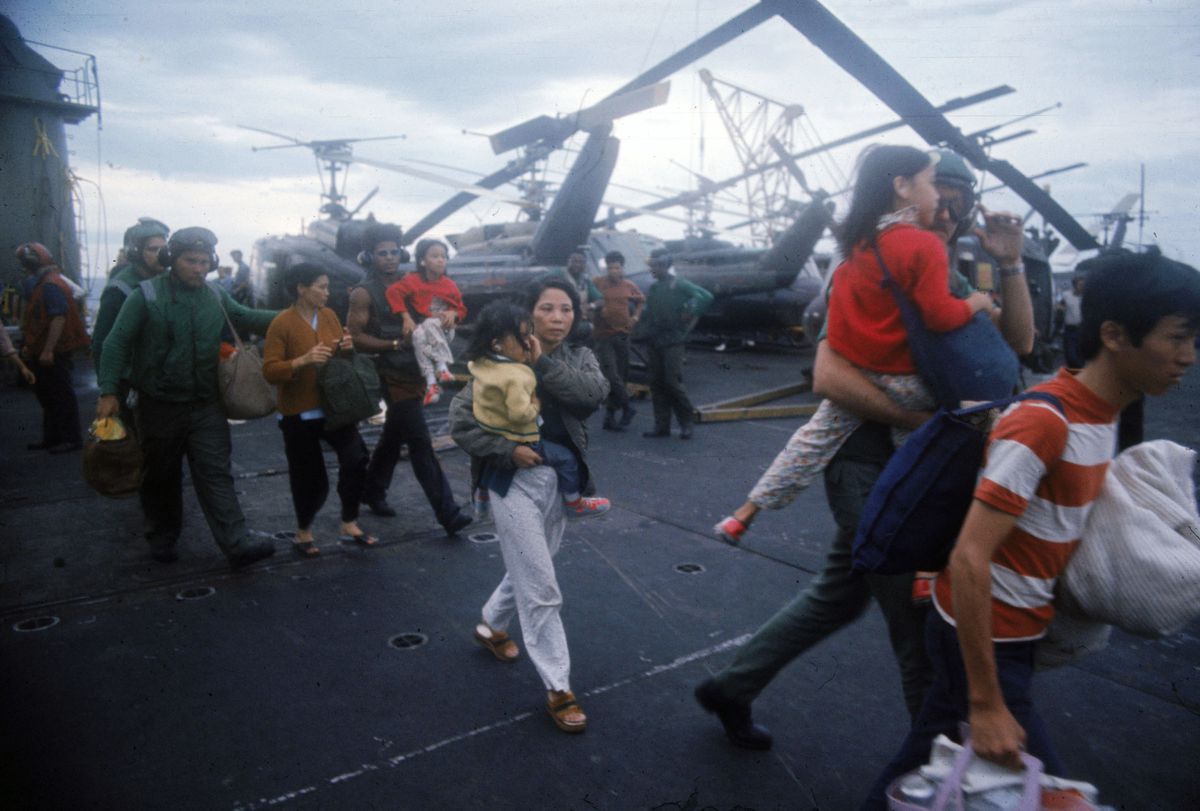 Though a major tech hub and the largest city in Silicon Valley, San Jose has always been the less-visible cousin to San Francisco an hour or so north. It’s sunnier and less expensive, with room for parking lots and gigantic malls. For immigrants, these aren’t so much signs of suburbia as they are signs of space and possibility: places where real estate might be more accessible; places where families can grow.

Refugees leave their home countries because they have no other choice. They don’t know where they will end up, just that they have to start over. In America, that starting over has always included the pressure to assimilate. The mere existence of immigrant communities can be seen as a refusal to do so: Instead of acculturating, they say, we are here, this is who we are, join us if you like. And if there’s one thing that refugees and immigrants will never give up, it’s their food culture.

Ethnic enclaves tend to grow around restaurants, groceries, and entrepreneurs, all looking for ways to fulfill cravings and provide reminders of home. In San Jose, the new Vietnamese community was bolstered by access to Asian markets in the area, that had already been established by other immigrant families from Asia. In this way, the Vietnamese community developed less as an enclave and more as an integrated, borderless part of the larger San Jose area.

One of the earliest businesses was Lee’s Sandwiches, which sold banh mi out of a truck and eventually grew into a stand-alone shop. Other businesses grew, too: clothing and fabric stores, import stores, music and video stores where you could get tapes of Vietnamese singers and shows. But always, the focal point was food: Places to get pho, banh mi, banh xeo, com tam, cafe sua da, produce, and snacks became social spaces. Places for gathering were always places for eating. 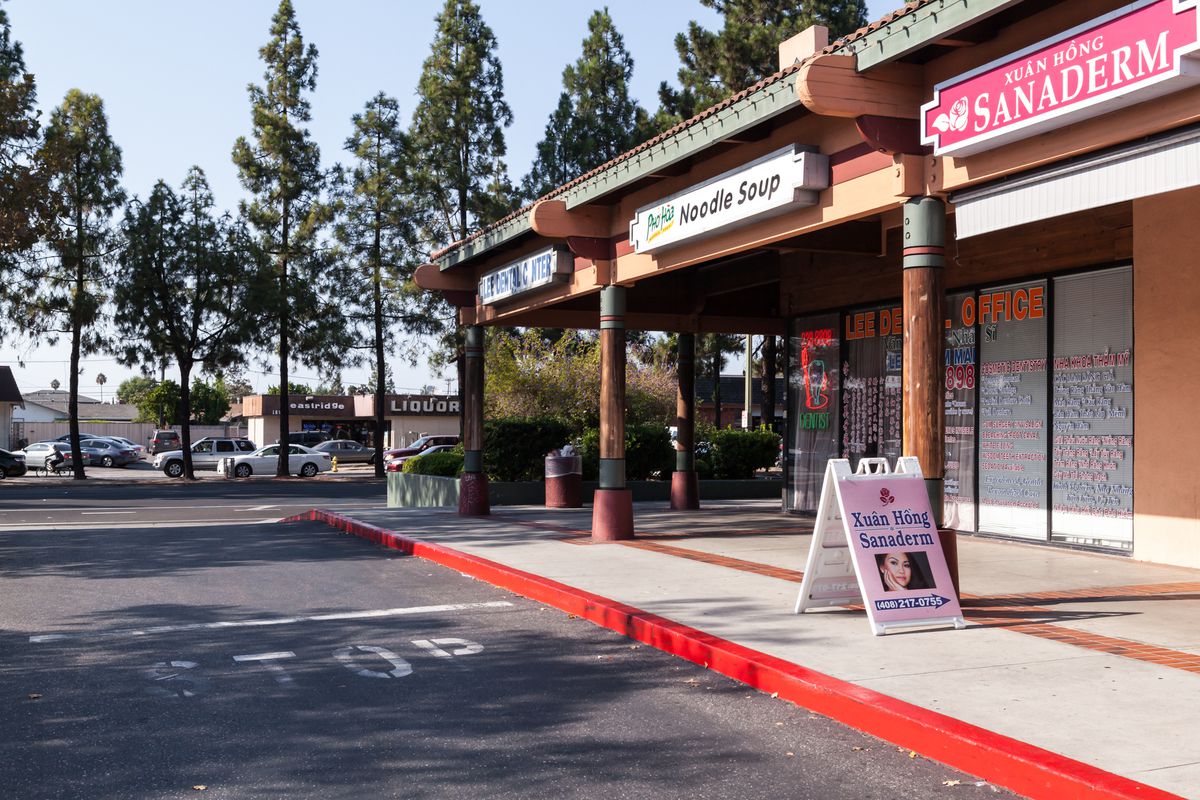 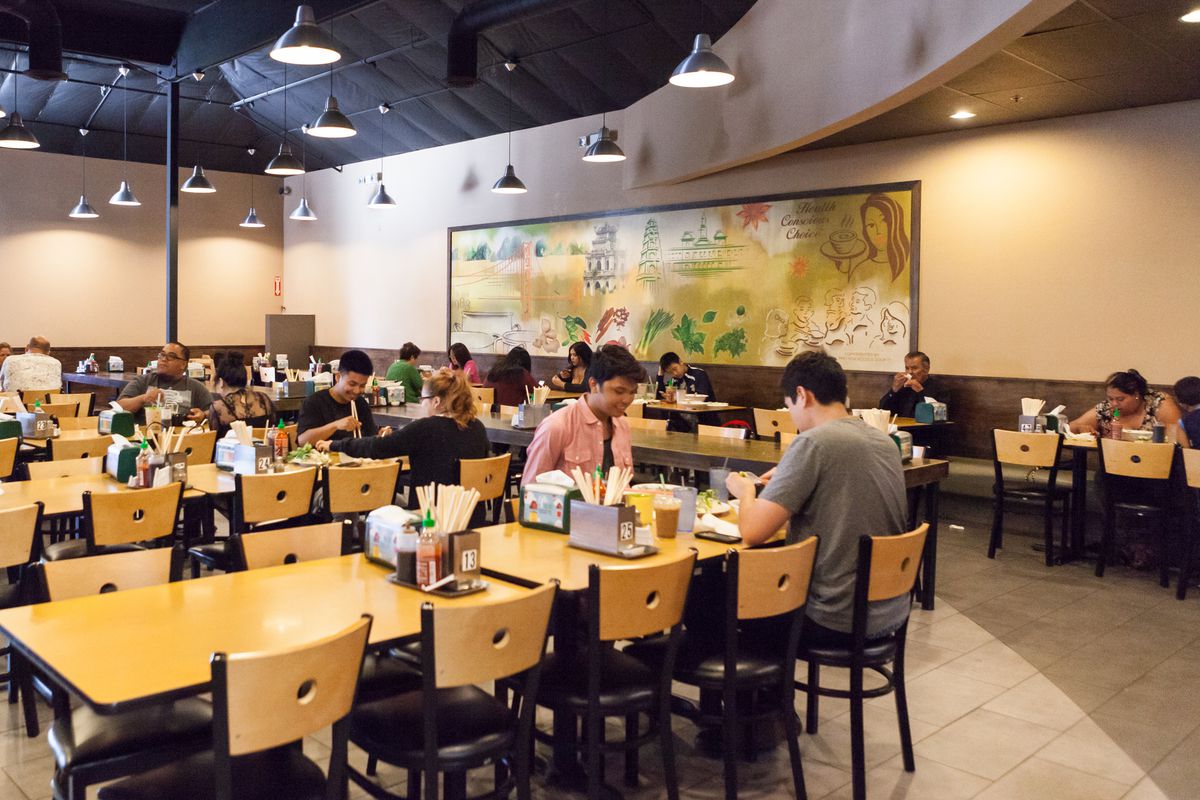 It’s probably fitting that the Vietnamese community in San Jose developed around shopping malls, which are nothing if not pragmatic. Lion Plaza on Tully Road, anchored by a giant Asian supermarket, took root in the early 1980s and became the heart of the community. Described by local paper San Jose Mercury News as “a place where no one makes a rendezvous, yet everyone comes,” Lion Plaza was a space for people to meet and for the community to emerge through celebrations at Tet (Vietnamese New Year) and other holidays.

Today, over 40 years after the fall, the original refugees in San Jose are surrounded by children and grandchildren who were born in America, who know Vietnam through stories and culture rather than experience. This generational shift can be seen not only in political viewpoints — the elders have tended to vote Republican, driven by anti-communist beliefs; the twenty-somethings now, much less so — but also in the changing landscape of San Jose’s Asian American community and Silicon Valley. The refugees of the past found work in restaurants, shops, and the early years of tech; many of their descendants are part of the changes driving that industry.

The malls reflect this contrast between generations. Lion Plaza remains old guard, old school. Vietnamese men still hang out and talk near the giant Lion Supermarket. A video store leaves its doors wide open, and Vietnamese songs blare out. Meanwhile, less than three miles away on Story Road, the Grand Century Mall, established in the 2000s, and the new Vietnam Town shopping area next door are all about the now, their architecture marked by a kind of Vegas-y, faux Tuscan look meant to signal affluence and aspiration. Alongside the restaurants are skincare salons and spas, jewelry stores, a plastic surgery center, a professional equipment karaoke store. The music blasting here is millennial. At the same time, shops like Tea Lyfe and Soyful Desserts bring a hipster element to this evolving mix.

Still, the generations coexist without competing. And in doing so they challenge preconceived ideas about authenticity, as what’s “authentic” isn’t necessarily found at a hole in the wall. San Jose’s Vietnamese community is about embracing tradition and making things new at the same time. Like the rest of Silicon Valley, it’s about growth. You can still find the produce and orchids and even Vietnamese videos, but you’ll also see bubble tea shops and stores devoted entirely to cosmetics. Lee’s Sandwiches is still around, but has grown into a banh mi chain. Pho Hoa, a restaurant that opened in 1983, has become an empire with over 60 locations around the world. Its home on Tully Road has granite countertops and pendant light fixtures. On the menu everything is outlined in English, and amidst more traditional options like the lemongrass pork chop, there’s a kid’s pho meal that comes with an organic juice box. The restaurant has even trademarked the phrase “Health Conscious Choice.” Pho Hoa, the original, is the fulfillment of the American dream of prosperity.

It makes sense that such an empire would begin with pho, surely the most well-known Vietnamese dish in America. With a long-simmered beef broth as its foundation, classic pho contains multitudes — rice noodles, meat, onions, herbs, and spices — in styles particular not just to regions but to families. Beef is common, as is chicken pho, called pho ga. The noodle soup is a concept and a canvas, depending on where you are and who’s doing the cooking. Lime, bean sprouts, hoisin, fresh herbs, and Sriracha all might be offered as garnishes, and now pho, traditionally a breakfast food, can be enjoyed at any time of day. The choice is the diner’s. 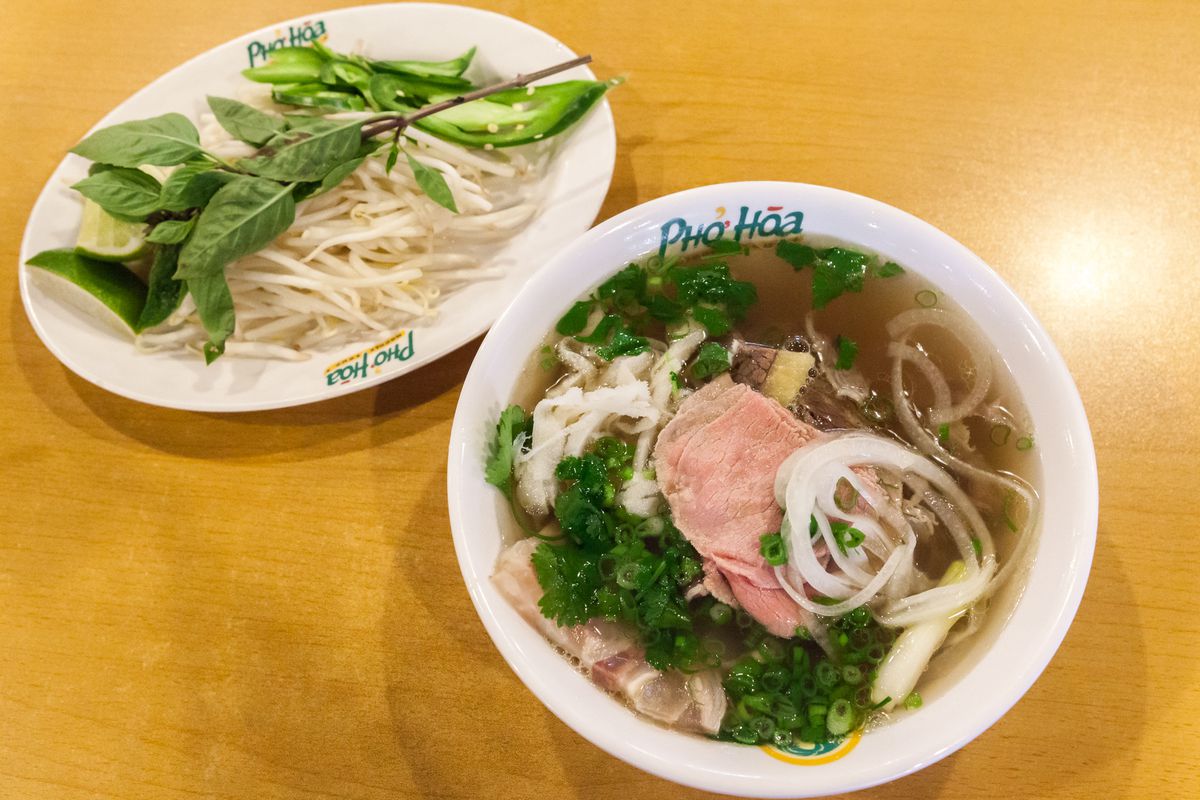 You can find plenty of standout pho restaurants in San Jose, but pho is not the only soup of Vietnam. There’s also bun bo Hue, a spicy beef noodle soup, or the crab-and-tomato noodle soup called bun rieu. Across the street from Lion Plaza, tucked into another shopping mall, the restaurant Cao Nguyen offers up a gorgeous canh chua, a sweet and sour soup with fish.

Food traditions from northern, central, and southern Vietnam all find representation in San Jose, and Vietnamese cuisine travels from the hearty and earthy to the delicate and light. Cao Nguyen’s claypot catfish, intensely caramelized with fish sauce, represents the hearty. And banh xeo, a crispy crepe stuffed with shrimp and pork and served with leafy greens, is light. The crepe is a specialty at many places, and is known by cooks as being one of the more difficult dishes to get just right. In between there are more staples: com tam, or broken rice; lemongrass pork chops; turmeric fish; and fried cha gio egg rolls or fresh rice-paper-wrapped goi cuon rolls — and they all find beautiful iterations in this city.

If you’re not in the mood for something savory, look out for tea and coffee and sweets, including iced coffee with condensed milk called cafe sua da; sugarcane juice, freshly squeezed out from sugarcane stalks; homemade waffles flavored with green pandan; and all manner of che — served warm as a dessert soup (che troi nuoc) or chilled as a kind of parfait with layers that might include tapioca, bean paste, grass jelly, taro, and often topped with shaved ice or served warm. 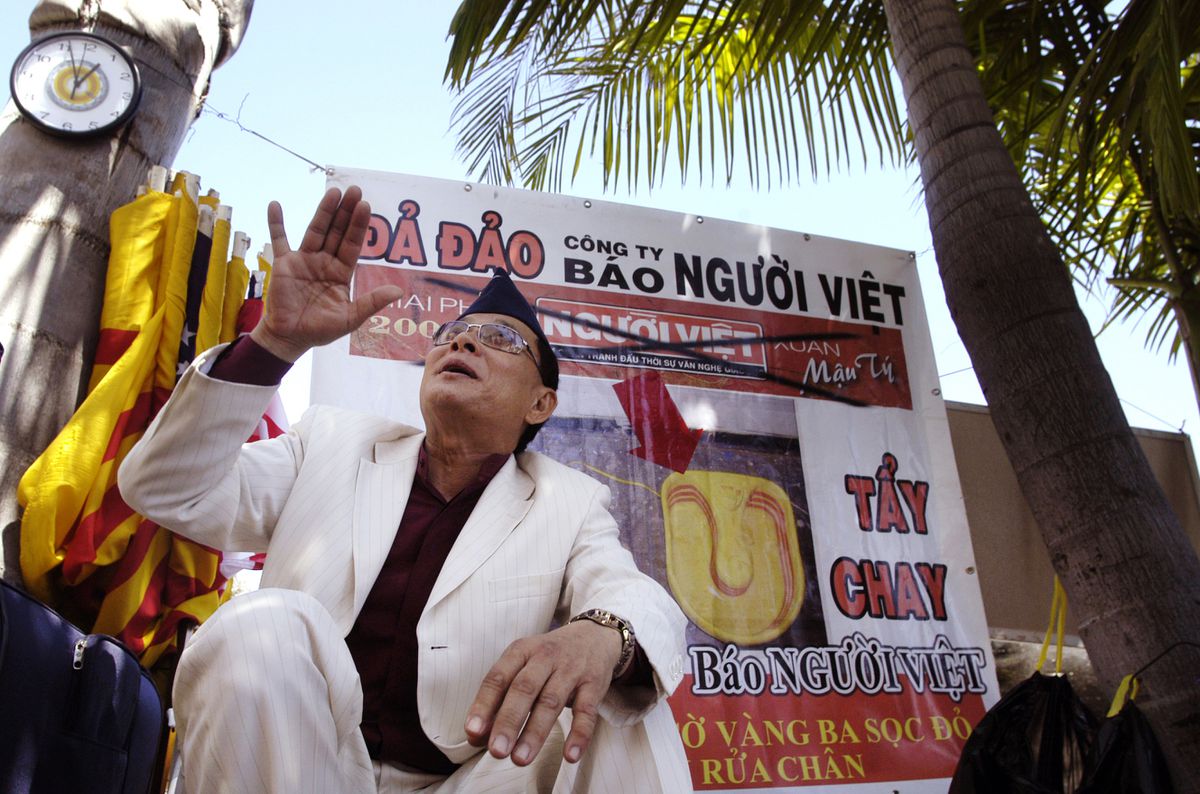 Ly Tong, an activist from San Jose, went on a hunger strike for three weeks to oppose the San Jose City Council’s decision not to name the Vietnamese retail area Little Saigon in 2008 — the decision was later repealed. (Marc Martin/Los Angeles Times/Getty Images)

Immigrants in America have always preserved their culture through food. Eventually, the rest of the country catches on. The earliest Vietnamese refugees remember Sriracha as an ingredient that white Americans looked upon as foreign, commercialized by a fellow refugee who opened the company in 1980, making hot sauce inspired by the flavors of Vietnam. Now the sauce is mainstream, tamed in mayonnaise even in fast-food chains. Is this a sign of progress, appropriation, assimilation? Depends on whom you ask. Immigrant communities exist in a space between the everyday and the “exotic,” ordinary to those who live there and a source of fascination to those who do not. Some years ago in San Jose there was a heated debate about the attempt to brand the Story Road area as “Little Saigon;” some wanted it to be called “Saigon Business District” instead. Though Little Saigon eventually won, it’s a designation that is more understood than commonly used.

Unlike Chinatowns in San Francisco or New York, the “Little Saigon” areas of San Jose are not known as a tourist destination, not even in the Bay Area. This is a community that goes about its business for the people who live there. The 2007 opening of San Jose’s Viet Museum, the first of its kind in the United States, signaled how integral the Vietnamese population had become to the area. But that too is an under-the-radar destination. For this community, integration is as much about daily life as it is about looking ahead. The growth of the “Little Saigon” areas is steadfast, its boundaries unmarked. The same might be said about the greater San Jose area, which continues to climb in tech, in food, and in culture. America has always been shaped by its immigrants, and is never separate from its immigrant cultures. The expanding Vietnamese and Vietnamese American communities in San Jose are further evidence of that. And whether you go to Story Road or Tully Road or stop somewhere in between, there’s no better way than to experience this than through food.■

Stories on the origins of this Vietnamese community.