Where to Find Haitian Flavors in Miami

Restaurants and bakeries in Little Haiti offer specialties appreciated by Haitians and non-Haitians like. In Miami, here’s where to find local flavors from this community. 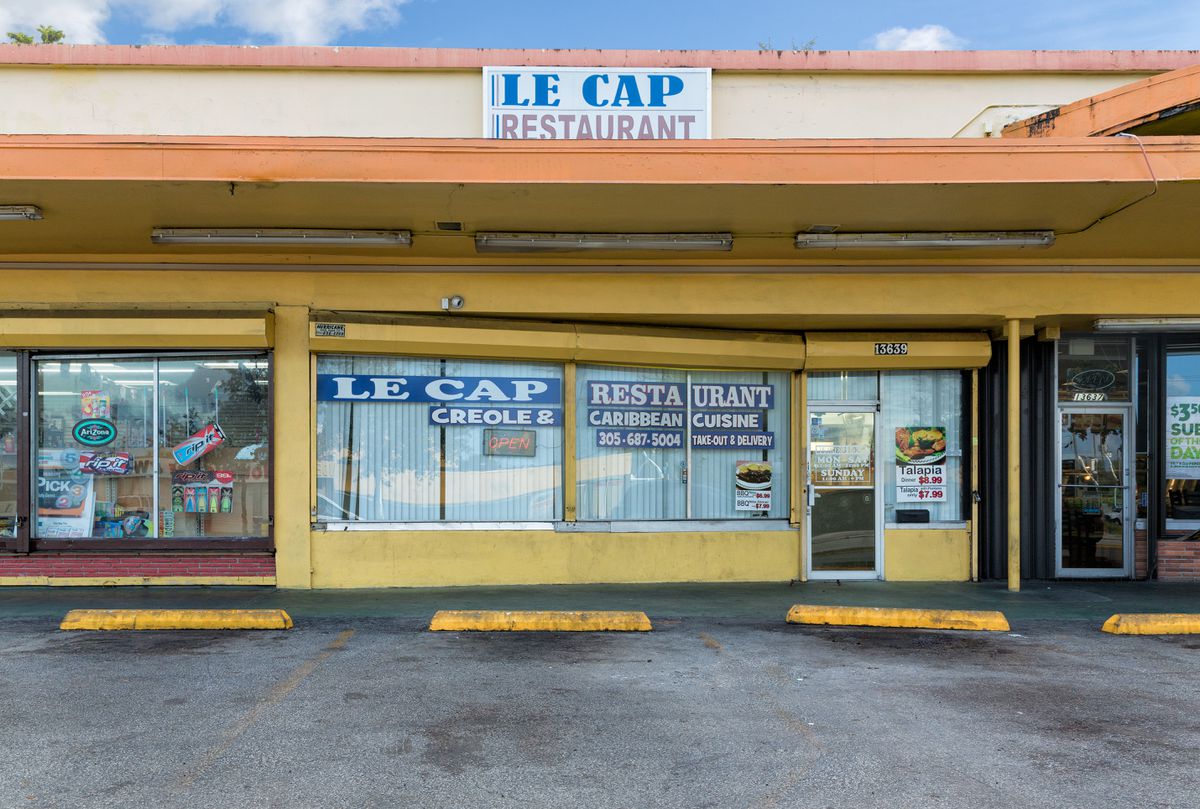 Lecap’s location west of Interstate 95 shows the expansion of Miami’s Haitian community into African American communities north of Little Haiti, which had a majority African American population before the waves of Haitian immigration in the 1970s and 1980s. The restaurant occupies space in a strip mall with a Haitian Evangelical congregation and a Vodou supplies shop (botanica). The simple interior is decorated with a couple of murals, including one of Haiti’s Citadel — the largest post-colonial fortress in the Americas.

Lecap does a brisk takeout business, and offers a concise menu of Haitian favorites popular with Haitians and African Americans in the neighborhood. Over the past decade, many non-Haitians have discovered Lecap by word of mouth, demonstrating a gradual acceptance of Haitian culture by communities that have historically been at odds with it.

While Lecap makes all of its food well, this is an ideal place to try legim (mixed vegetable stew) with a side of diri ak djon djon, if it is available. It also serves a refreshing ji grenadya, passion fruit juice accented with just a hint of vanilla extract. A slice of macaroni gratin, a typical party dish, highlights Haitian seasonings in a familiar American comfort food. 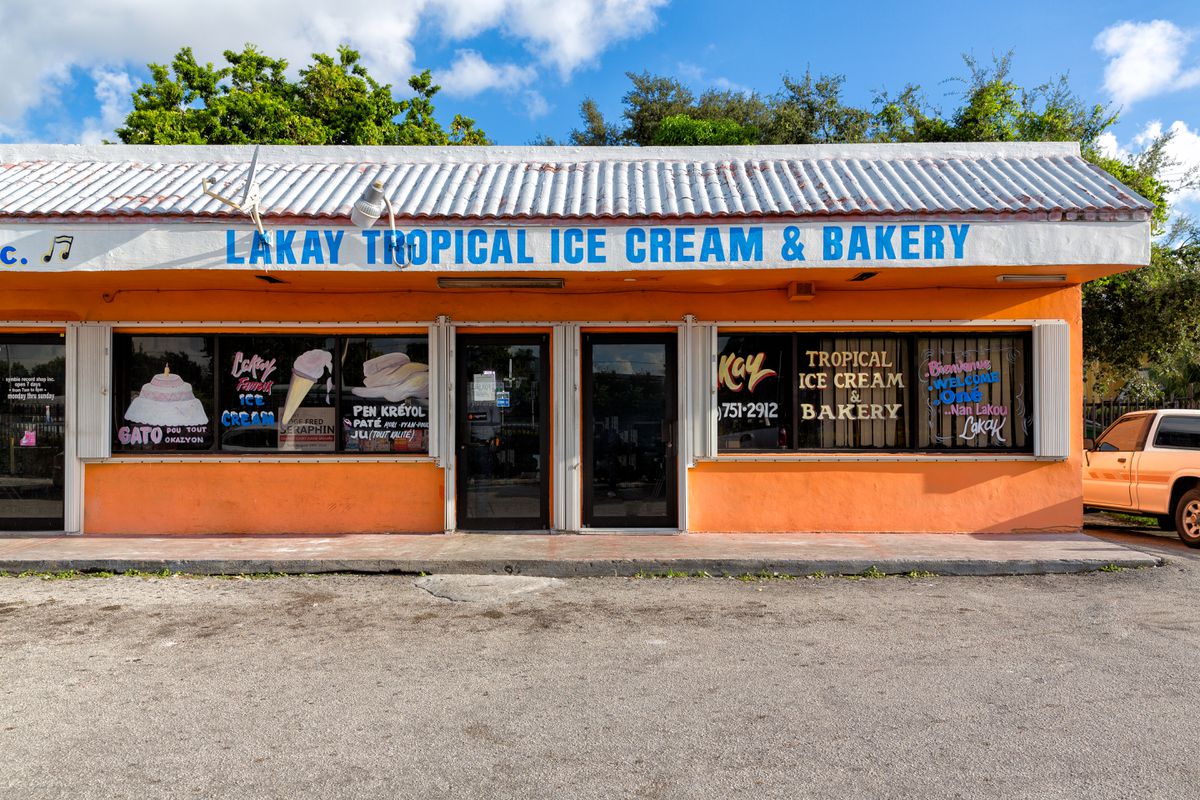 Lakay Tropical Ice Cream is Miami’s only purveyor of homemade Haitian-style ice cream in refreshing flavors like kawasol, made from the slightly tangy soursop fruit. The shop also offers typical baked goods like pate, and produces its own mamba, a spicy and salty Haitian peanut butter that is typically spread on pen kreyòl (creole bread) or kassav (crisp cassava flatbread).

Hear more about this restaurant

Lakay , a popular term in Kreyòl, refers to something coming from one’s homeland, and subtly indicates the shop’s Haitian identity. Leaman Bien-Aime owns and operates Lakay Tropical Ice Cream with his wife. Bien-Aime belongs to a professional class of Haitians who migrated to New York and then moved to Miami in the late 1970s, once segregation had ended and there was a more significant Haitian community. Bien-Aime is a counselor by profession; the ice cream shop and bakery have been his family’s side business since 1999. 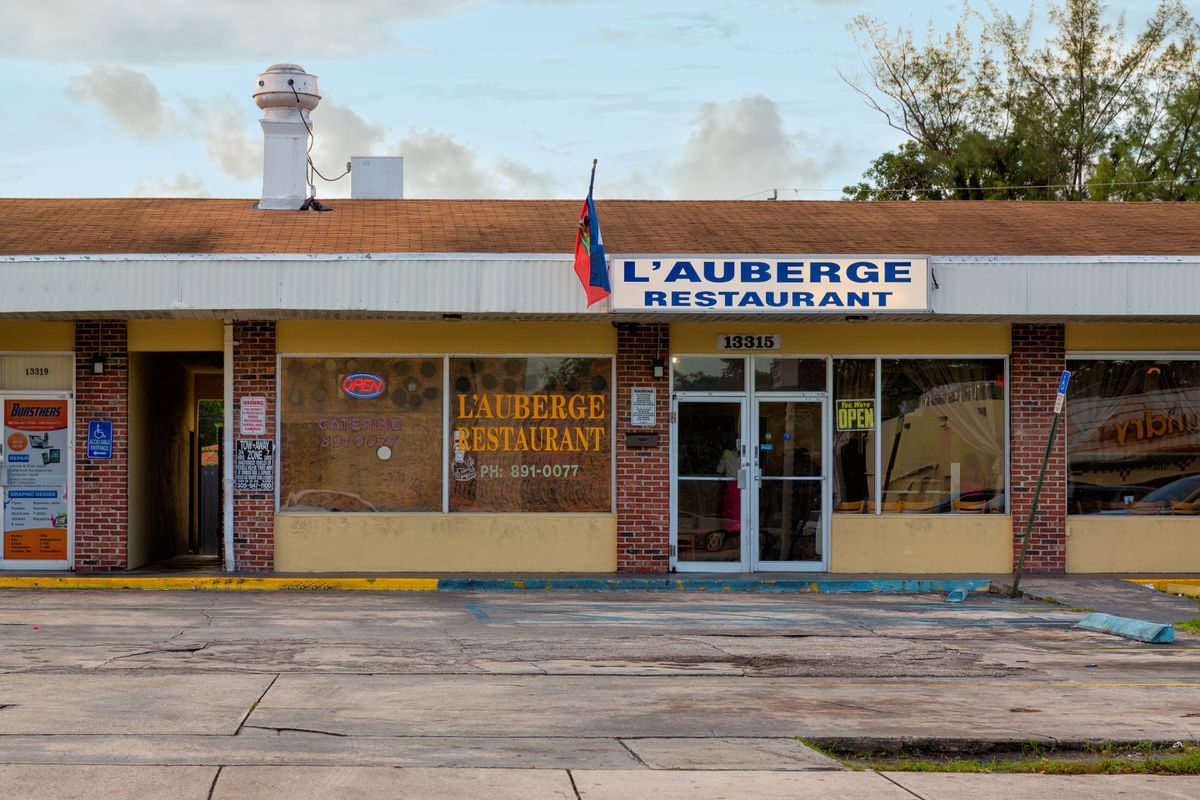 The majority of Haitian migrants to Miami in the 1980s and 1990s first settled in Little Haiti. Once they began to gain financial stability, many moved north to the city of North Miami, which offered opportunities for affordable home ownership, as well as an atmosphere somewhat removed from the inner city environment of Little Haiti.

The menu at upscale Haitian restaurant L’Auberge is mostly in French. Take its Sunday morning specialty, soup joumou: The dish, a symbol of Haiti’s liberation from France, is here known by its French name, soupe giraumon. This isn’t uncommon in Miami; dishes appear written in French — considered by some a more “formal language” — on menus across Little Haiti.

Regardless of the language describing it, the food at L’Auberge is all Haitian. There’s another Sunday special, poul nan sòs nwa (stewed chicken in cashew sauce), which can be enjoyed alongside diri ak djon djon prepared with basmati rice and green peas. Other daily specials include pwason gwo sèl (fish in lime sauce) and various hearty soups. The restaurant also offers jus atomic, a blend of several fruit and vegetable juices sweetened with sugar. 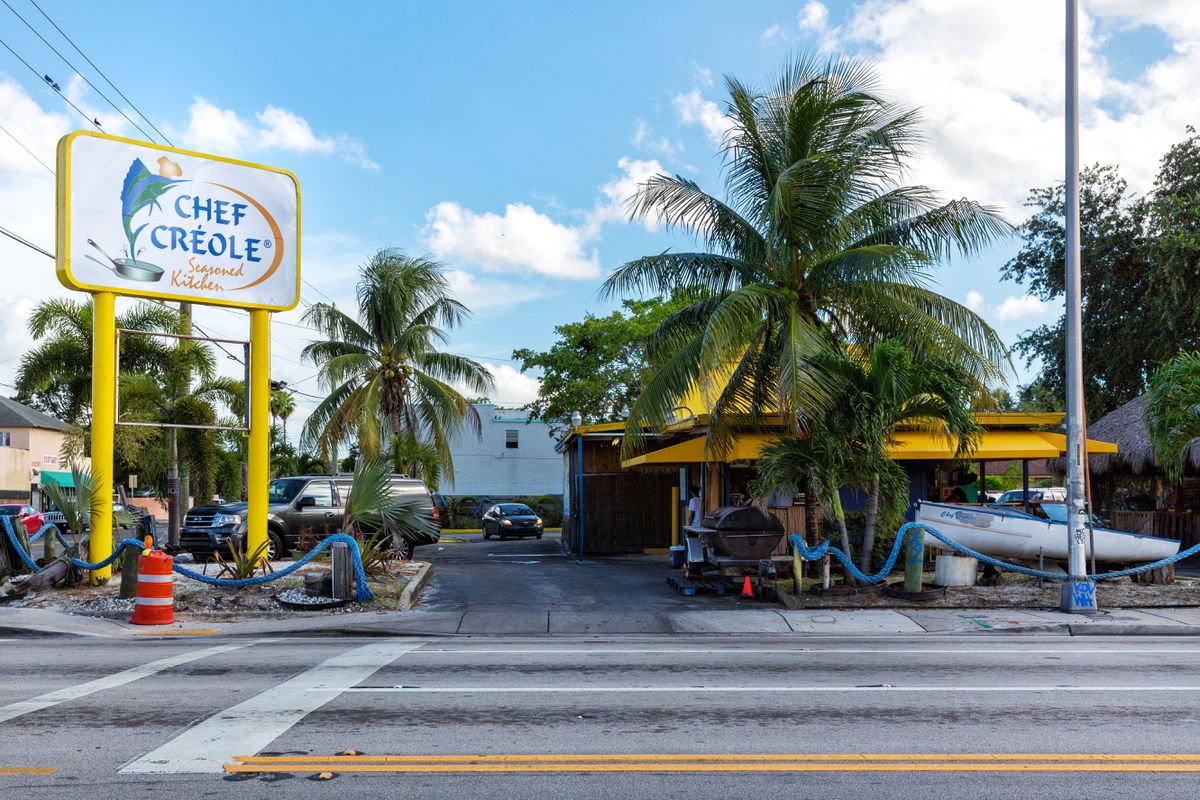 The Chef Creole chain of restaurants in Miami-Dade County specializes in seafood, as well as other Haitian dishes like griot. This is one of the few places where you can sample lambi, or conch, in numerous preparations, and the restaurant typically displays the raw mollusc on ice alongside other seafood offerings, mirroring non-Haitian restaurants in the area. The ambiance, reminiscent of a casual outdoor beach shack, is a place where the community can socialize and occasionally get up to dance to the kompa or racine music blaring through the speakers.

Hear more about this restaurant

Chef and owner Wilkinson Sejour was raised in Miami in the 1990s and has succeeded in raising the visibility of Haitian food and culture in Miami. He’s opened multiple locations of his restaurant and caters to a Haitian customer base while also reaching those outside the community; for many non-Haitians in Miami, Chef Creole provides a first taste of Haitian cuisine. In addition to his restaurants, Sejour has a branded line of seasonings, condiments, and kremas, a kind of coconut rum punch. Sejour and his restaurants have also been featured on several national television programs where his outspoken personality and passion for Haitian cuisine have made him a hit with audiences and producers. 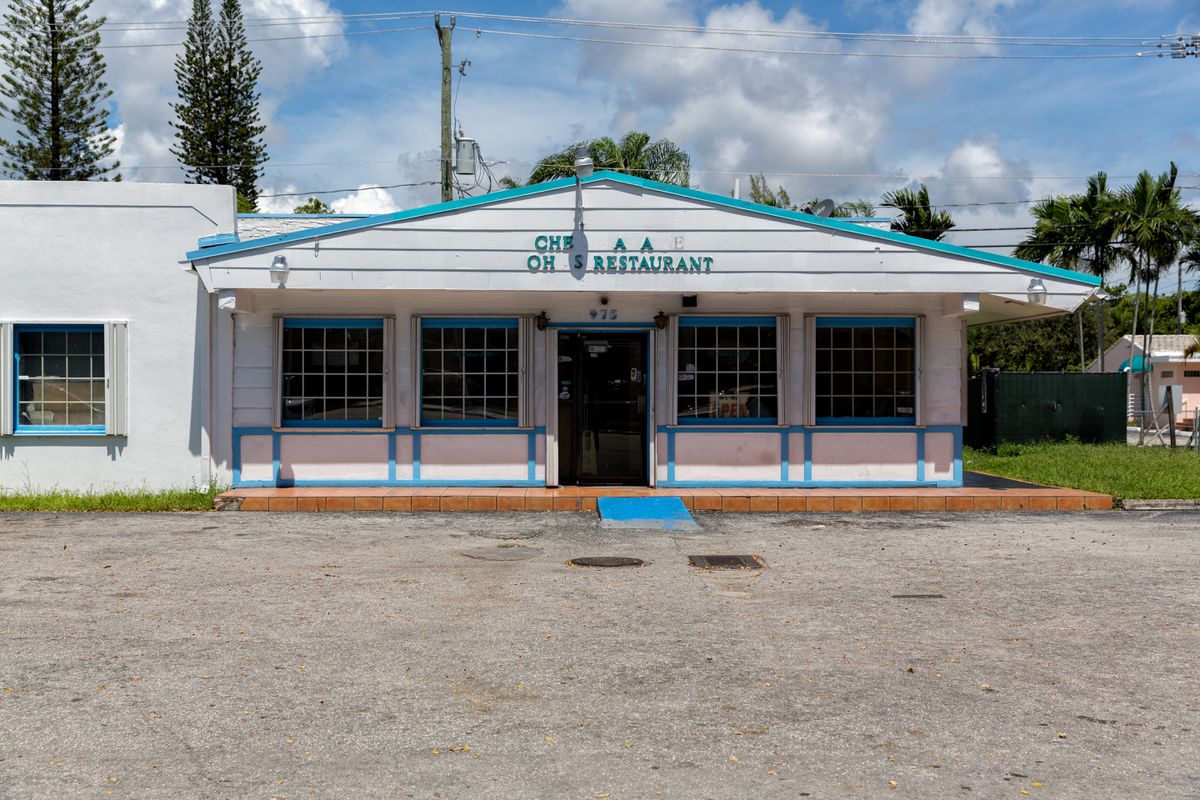 Chez Madame John’s represents an upward trajectory from informal home business to formal restaurant. Like many recent Haitian arrivals, owner Marie Blanc began providing for herself by selling food from her home kitchen, establishing a sort of underground takeout restaurant. She was best known for fritay, particularly griot — Haiti’s national dish of deep-fried pieces of slow-braised pork. Her cooking became extremely popular with Miami’s Haitian community, and the vehicles of eager customers often congested the block where she lived as her reputation for serving the best griot in the city grew. Her fame caught the attention of some understanding city officials, who, along with her customers, urged her to establish a brick-and-mortar restaurant. She did so in 1999, on North Miami’s main business street.

Like many Haitian food businesses, the restaurant bears few signs of Haitian identity. Inside, a felt signboard with some letters missing reveals the menu options in French and English. Little has changed in terms of decor since Madame John opened her doors, and among Miami’s Haitian community, Chez Madame John’s Restaurant continues to be a preferred source for all manner of fritay, particularly griot. The tasso (fried goat, beef, or turkey) is also exemplary, and the akra (malanga fritters) are a favorite. Fritay complet (spelled fritaille complet here) comes with a side of bannann peze (twice fried plantains) and maybe a piece of patat (fried white sweet potato) with fiery onion pikliz (spicy vinegar slaw), along with diri kole (rice and beans cooked together) and a side of clove-scented tomato sauce to drizzle on the rice. Fritay simple omits the rice and tomato sauce. On Sundays, the restaurant does not serve fritay until the afternoon, but is one place to sample soup joumou (pumpkin soup) early in the day. 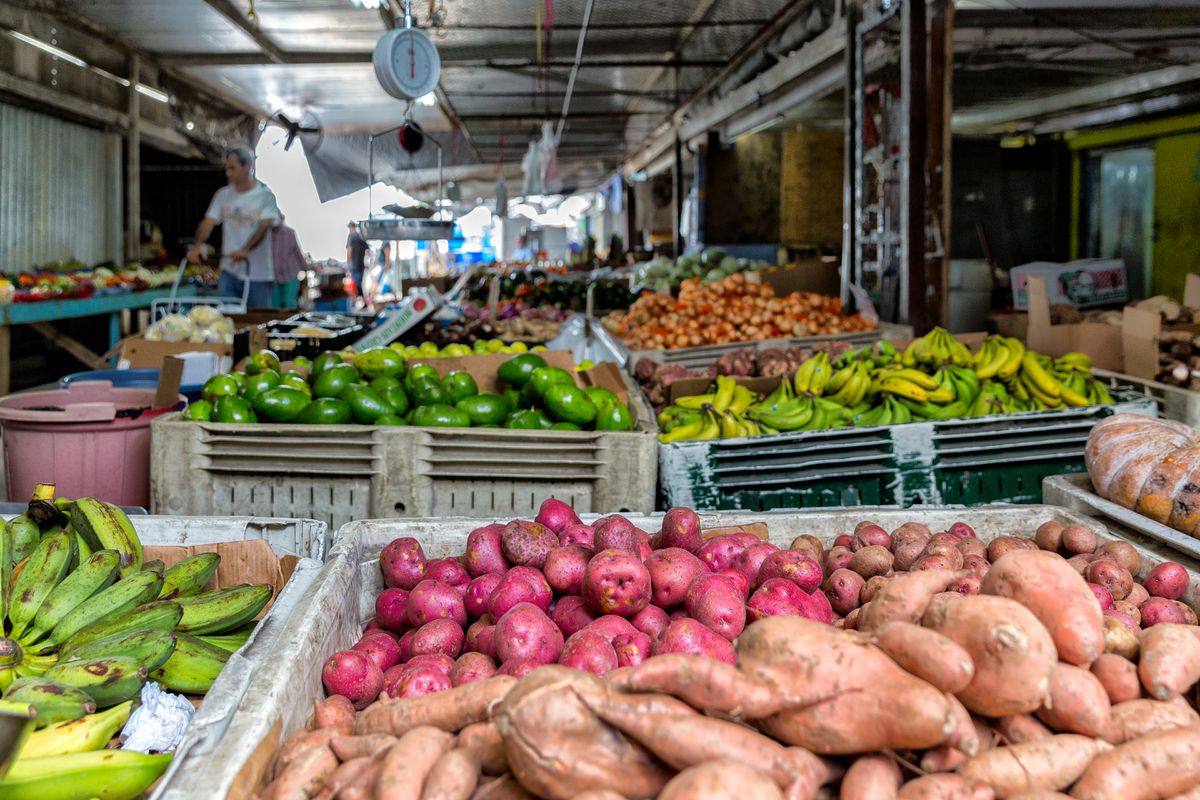 Within the city of Opa-Locka and bordering the city of Hialeah, far west of North Miami and Little Haiti, Opa Locka Hialeah Flea Market is a bustling recreation of Latin American market culture.

In the 1980s and 1990s, Opa Locka Hialeah Flea Market became the business arena for newly arrived Latin American and Caribbean immigrants with few financial resources, Low vendor fees and fewer regulations than other business avenues meant that people with meager resources could become entrepreneurs. In addition to an occupation and income, working at the market provided vendors with access to other goods and services that connected them to their language, culture, and foodways.

Listen to an interview with a market vendor

A common informal occupation for many women in Haiti is that of ti machann (literally, “little merchant”), selling a small number of goods at a market for an equally small profit. Many Haitian women continued the tradition at the Ti Mache, which is what many Haitians in Miami now call this flea market. Some women began their businesses by scouring yard sales and curbsides for old furniture, costume jewelry, toys, clothes, or any other items that could be sold for profit. Others sold produce and grocery items, and as their income grew, so did the size of their stalls and the selection of their wares.

On the eastern end of the flea market today, numerous Haitian women sell dried beans and grains in large burlap sacks, bags of imported djon djon, cashews, spices, herbs, chiles, pumpkin, plantains, and all the necessary ingredients to prepare Haitian dishes. A few aisles towards the west are other ti machann selling all manner of cookware favored by Haitians — cast aluminum pots, large handmade wooden spoons, and wooden mortars all imported from Haiti, along with other inexpensive kitchen implements manufactured elsewhere.

At the Ti Mache, ethnic groups that sometimes live isolated from each other in Miami buy and sell goods side by side, revealing the commonality in many of the foods consumed throughout the Caribbean. 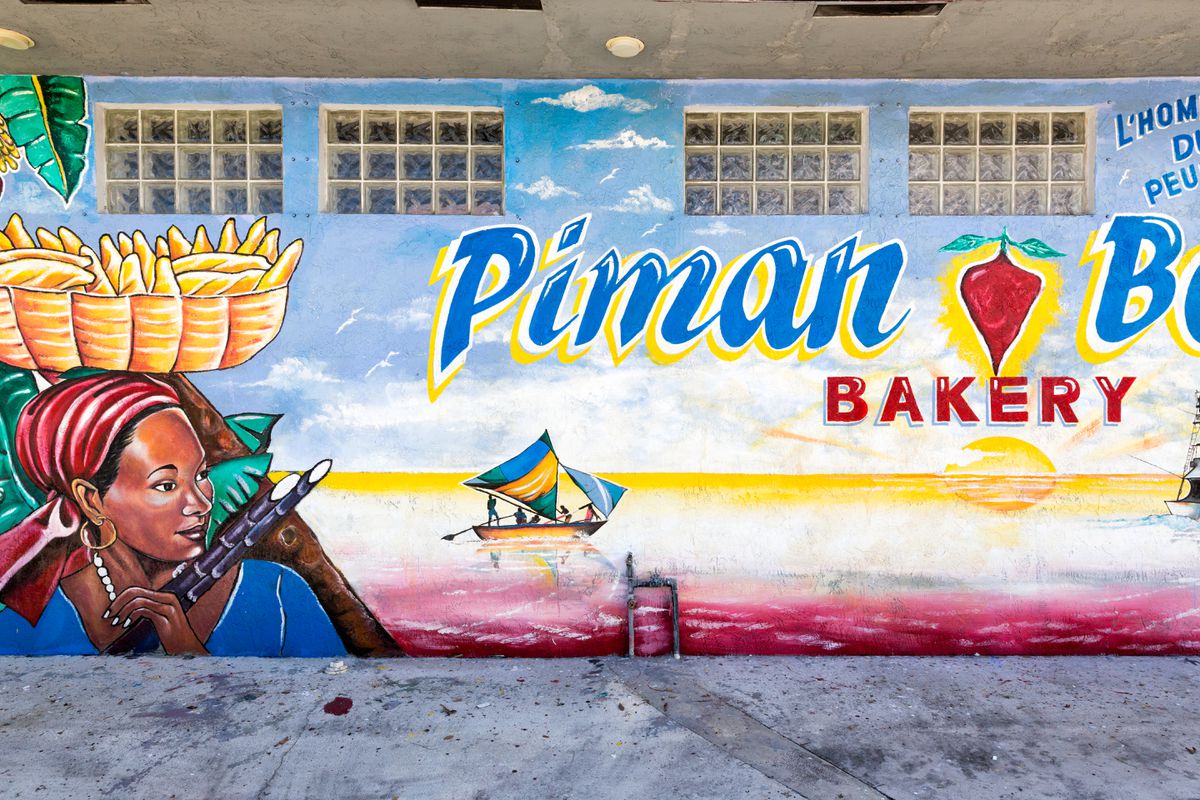 Haitians are a bread-eating people, and Haiti has a rich tradition of pastry and bread making. Few Haitians start their day without at least a piece of fresh, warm pen kreyòl, or creole bread, with their coffee. The long loaves have a pale, crisp exterior and a soft, dense interior. The bread goes stale quickly, so many Haitians pick up loaves throughout the day to accompany meals; bakeries have a steady stream of fresh bread in the oven for a nearly constant flow of customers. Haitian bakeries in Miami also provide the community with one of its favorite snacks, pate — buttery puff pastries with savory meat fillings.

New Florida Bakery has been a culinary mainstay for decades, and many Haitian Americans fondly remember going there as children to enjoy flaky pate, slices of cake infused with almond essence, and ginger-laced tablèt candy containing peanuts, cashews, or chunks of coconut. New Florida Bakery is located between two iconic symbols of Miami’s Haitian community: Notre Dame d’Haiti Catholic Church and the Toussaint Louverture memorial. The church served as a base from which many Haitian immigrants received social services in the 1980s and 1990s, and it organized the community’s response to the 2010 earthquake in Haiti. Just across the street from New Florida Bakery, the Toussaint Louverture memorial commemorates one of the heroes of the Haitian revolution.

The painted mural on the building reads “Piman Bouk Bakery” because New Florida Bakery is currently operated by the Piman Bouk family of businesses, which includes the Piman Bouk restaurant in Little Haiti and Radio Piman Bouk located right above it on the second floor.

How a Haitian community emerged in Miami.