Little Haiti and Beyond: A Culinary Community in Miami

Sak vid pa kanpe. Translated, it means “an empty sack cannot stand” in Kreyòl, Haiti’s lingua franca. This popular Haitian proverb not only demonstrates the importance of food to Haitians, but also symbolizes the need to stand together through adversity. In Miami, Haitians have received some of the worst treatment of any immigrant group in the United States, and a common theme within the community has been the need for invisibility in a hostile environment. At the center of the Haitian experience in Miami is food, which serves as a powerful symbol of Haitian identity and perseverance. The growth of the food community also parallels the strides it’s made in overcoming barriers to inclusion.

And yet, Haitian cuisine has hitherto been largely excluded from discourse on Miami’s multiculturalism and culinary identity. Cuban sandwiches, empanadas, stone crab claws, and key lime pies are touted as local specialties. But Haitian dishes like griot, pate, and diri ak djon djon don’t always get the same enthusiasm, if any promotion at all. Formal retail shops seldom, if ever, flaunt their Haitian identity; food businesses have English or French names and feature words like “Caribbean,” “Tropical,” or “Island.” One of the most popular Haitian bakeries remains entirely ambiguous with the name New Florida Bakery.

Haitian flags are rarely flown. The most popular way for restaurants to indicate their Haitian identity is by using the word “Creole,” a generic term non-Haitians do not typically associate with any one country. Another popular term is lakay, which is a Kreyòl word that indicates being from one’s homeland. As a result, many Haitian businesses are unrecognizable to non-Haitians who are unfamiliar with the culture. And this is due, in large part, to the county’s racial and ethnic politics over the last several centuries.

The first Haitians arrived by boat to Miami in 1963, followed by more a decade later. Jean-Claude “Baby Doc” Duvalier’s brutal dictatorship of the 1970s motivated more of Haiti’s working class to make the dangerous sea voyage to Miami, and by 1977, Haitians regularly arrived at Miami’s shores. Between 1977 and 1981, more than 70,000 Haitians migrated to South Florida this way. 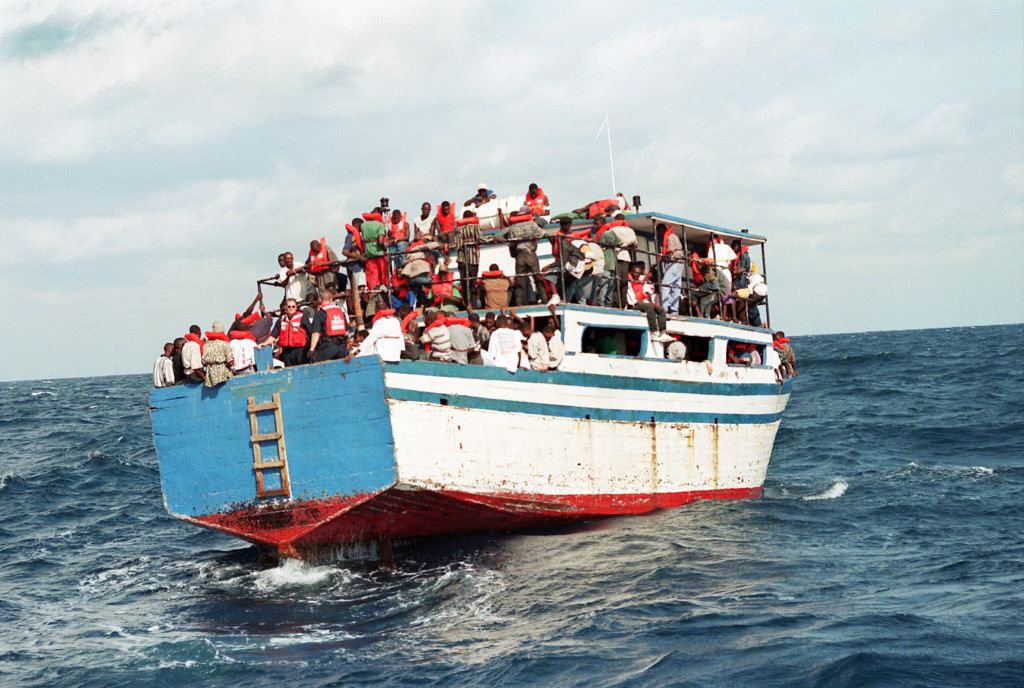 Earlier Haitian migrants in the 1960s represented the professional and upper class fleeing Duvalier’s dictatorship, but they largely settled in cities like New York, because they were deterred by the segregationist policies in Miami at the time. The end of Jim Crow laws and presence of a significant Haitian community in the late 1970s motivated many of these earlier migrants to move south to Miami.

Haitians have suffered negative stereotyping since their country’s independence. Supporters of American slavery fabricated tales of cannibalism and child sacrifice in Haiti shortly after Haiti’s independence to justify the practice of slavery in the United States. These lies were retold in 1915 to justify the US occupation of Haiti. It was at this time that fears of Vodou (or Voodoo) and its associations with Haiti entered the American public consciousness. It’s likely that these views informed the treatment of Haitian migrants to Miami in the 1980s and 1990s. Haitians were rarely considered political refugees, even while fleeing a dictatorship, and were denied asylum and often locked in detention centers for months before being deported back to Haiti. Meanwhile Cubans, Miami’s most prominent immigrant group, gained asylum and legal resident status. 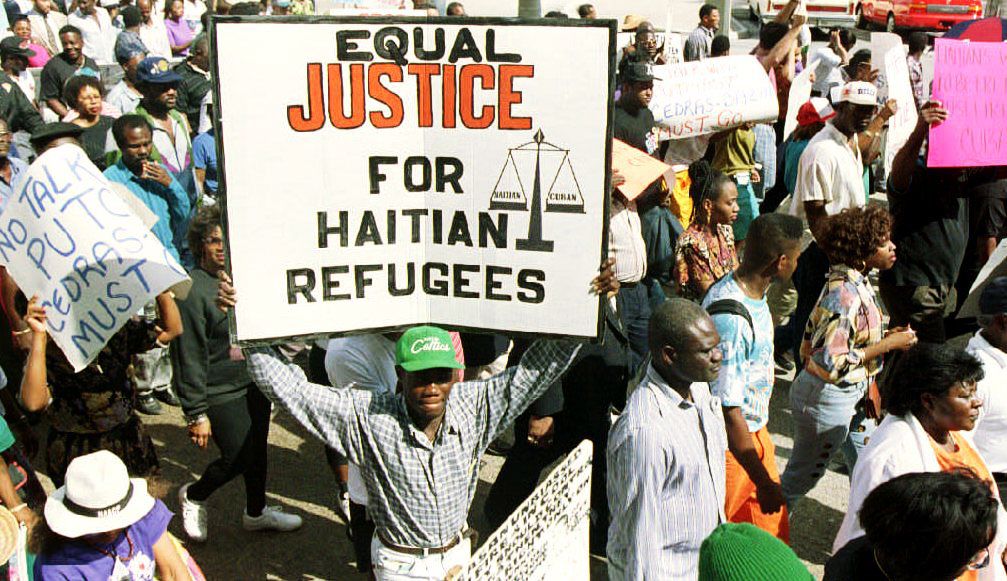 Hundreds marched in Miami to protest the policies of U.S. Immigration and Naturalization against incoming Haitian refugees on February 4, 1993. Andy Itkoff/AFP/Getting Images)

Haitians who managed to stay in Miami faced more challenges, as locals saw them as unsanitary and uneducated. Floridians feared that Haitians would use Vodou to curse or poison them. Few non-Haitians ventured to try Haitian cuisine, believing that Haitians ate stray cats. And a rumor in the 1970s that Haitians carried tuberculosis caused widespread panic in Miami, preventing many from securing employment. In the 1980s, the Centers for Disease Control declared Haitians as one of the primary at-risk groups for HIV/AIDS (along with homosexuals, hemophiliacs, and heroin abusers). Although the CDC removed Haitians from the list, the effect was deeply marginalizing. Haitians continued to find it challenging to secure stable employment throughout the 1980s and 1990s, particularly in the restaurant industry. Those who did find employment held low-level jobs and didn’t often advance in the workplace.

Haitians represent a triple minority in Miami: They are Black, they are immigrants, and they are linguistically isolated, as the majority of Haitians speak Kreyòl, their native language. The fact that Haitians were immigrants possessing a distinct language and culture from that of African Americans prevented the latter from fully embracing the former. On the contrary, African American youth often ridiculed and beat up their Haitian classmates, leaving many Haitian youth feeling isolated and threatened. 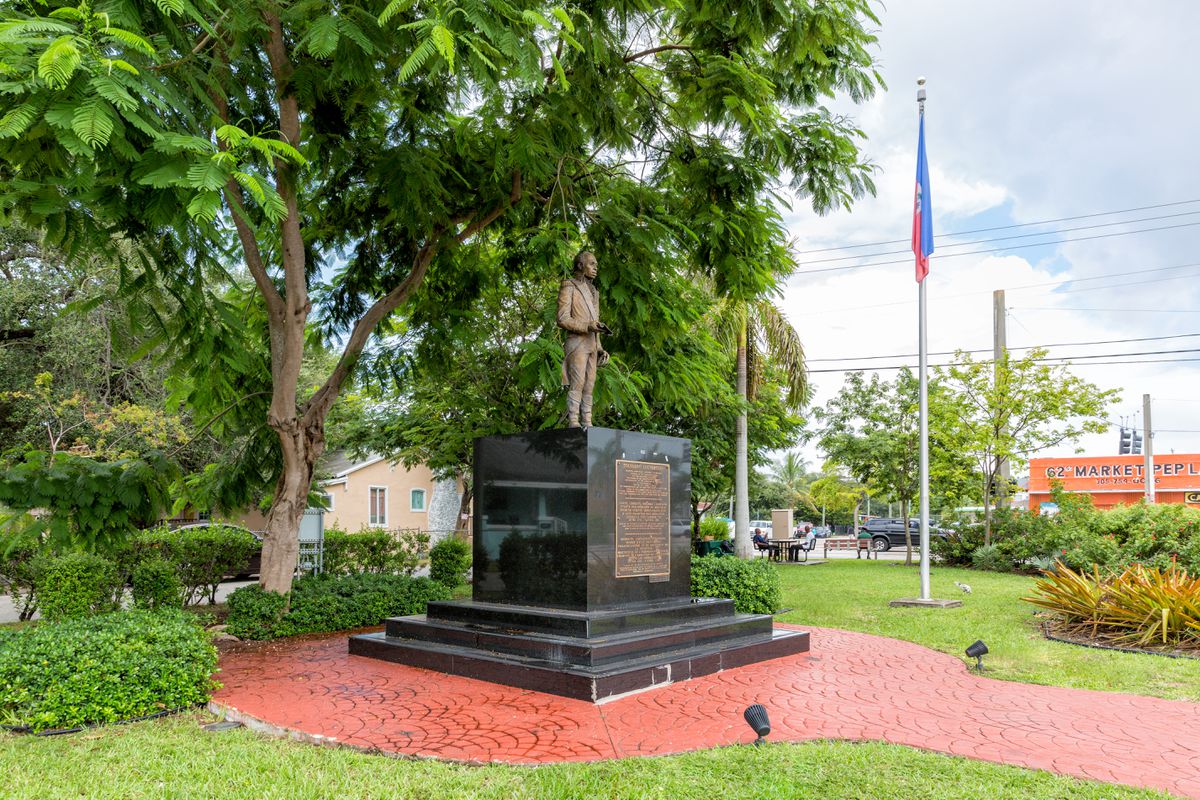 The negative view of Haitians in Miami facilitated the need for the community to deflect any unnecessary attention. In the 1980s and throughout much of the 1990s, Haitian identity and culture became a source of shame for some. Affluent, professional Haitians — many of whom were light-skinned and could pass for European or Latino — largely chose to remain culturally anonymous. Additionally, racial and class stratification in Haiti continued in Miami, informing the Haitian elite’s decision to dissociate themselves from their Black, impoverished countrymen in Little Haiti. Many emphasized a French identity. These elites also refused to conduct business in Little Haiti or with Black Haitians and rarely employed other Haitians, impeding the formation of a strong economic network as found in Miami’s other ethnic communities.

Many Black Haitian youth in the 1980s and 1990s covered up their Haitian identities and assimilated into mainstream African American culture by Americanizing their names, adopting a hip-hop aesthetic, and refusing to speak Kreyòl. Such youth were constantly wary of being exposed as Haitian. One tragic example that rocked the Haitian community was the 1984 death of teenager Phede Eugene, who went by Fred. His sister spoke to him in Kreyòl at a McDonald’s in front of his African American girlfriend. The shame led him to purchase a gun and commit suicide.

Because of the employment discrimination that many Haitians experienced in Miami, many individuals, particularly women, were forced into the informal economy. Many established underground restaurants and catering services from their homes, as was the case with Marie Blanc, who later opened Chez Madame John’s, a formal brick-and-mortar eatery in North Miami. Other women sold goods on street corners or more formally in places like the Opa Locka Hialeah Flea Market.

Learn more about this market

Dr. Alex Stepick, a pioneer in the study of Haitians in Miami, largely credits musician Wyclef Jean and his group, The Fugees, with symbolically bringing Haitians, particularly youth, out of hiding. In the late 1990s, the artist’s open pride in his heritage and display of the Haitian flag at concerts demonstrated to many Haitians in Miami that it had become safe to publicly express one’s identity. Additionally, many realized that Haitians represented the majority or the largest single ethnic group in places like Little Haiti and North Miami, which provided a sense of security in numbers.

The Haitian Bicentennial in 2004 marked the beginning of an intensive coming out for Miami’s Haitian community. The county government publicly recognized the observance with posters on buses and other public spaces. Many Haitian youth throughout Miami are more confident in publicly speaking Kreyòl and flying their country’s flag. Large public festivals like the yearly Compas Festival in downtown Miami draw large crowds, and additional festivals representing Haitian cuisine, literature, and music appear in greater numbers every year, bringing together an increasingly diverse group of people curious to experience Haitian culture. 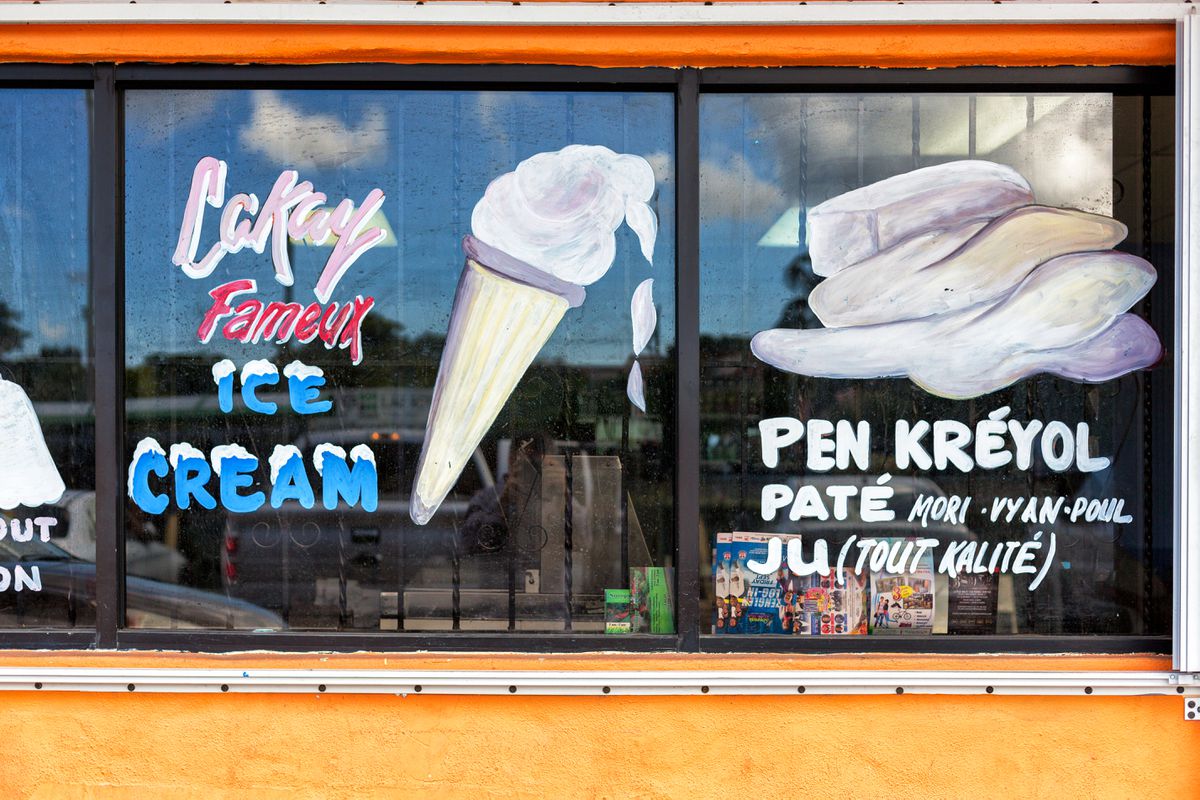 In 2016 the area of Lemon City and Little River where the majority of Haitians first settled received official designation as Little Haiti, finally legitimizing the role of the Haitian community in Miami. Since the 1980s, Little Haiti has grown abundant with diverse Haitian businesses from restaurants and bakeries to bookstores and record shops. The building facades are painted in bright colors and made to resemble traditional Haitian architecture. The Little Haiti Cultural Center, which debuted in 2006, provides the community and the greater population of Miami with a setting for cultural performances, art exhibitions, and classes in Haitian art forms.

Nevertheless, Haitians in Miami still face an uphill battle combating persistent negative stereotypes and a lingering fear of being too conspicuous. The recent official designation of Little Haiti was met with opposition from the African American community, as well as white land developers who felt that such a designation would scare off investors. Haitian cuisine, while gaining notoriety as a local cultural asset and even a potential draw for tourism, is not widely appreciated outside the Haitian community. Many food businesses remain covertly Haitian, making it difficult for non-Haitians to seek them out. 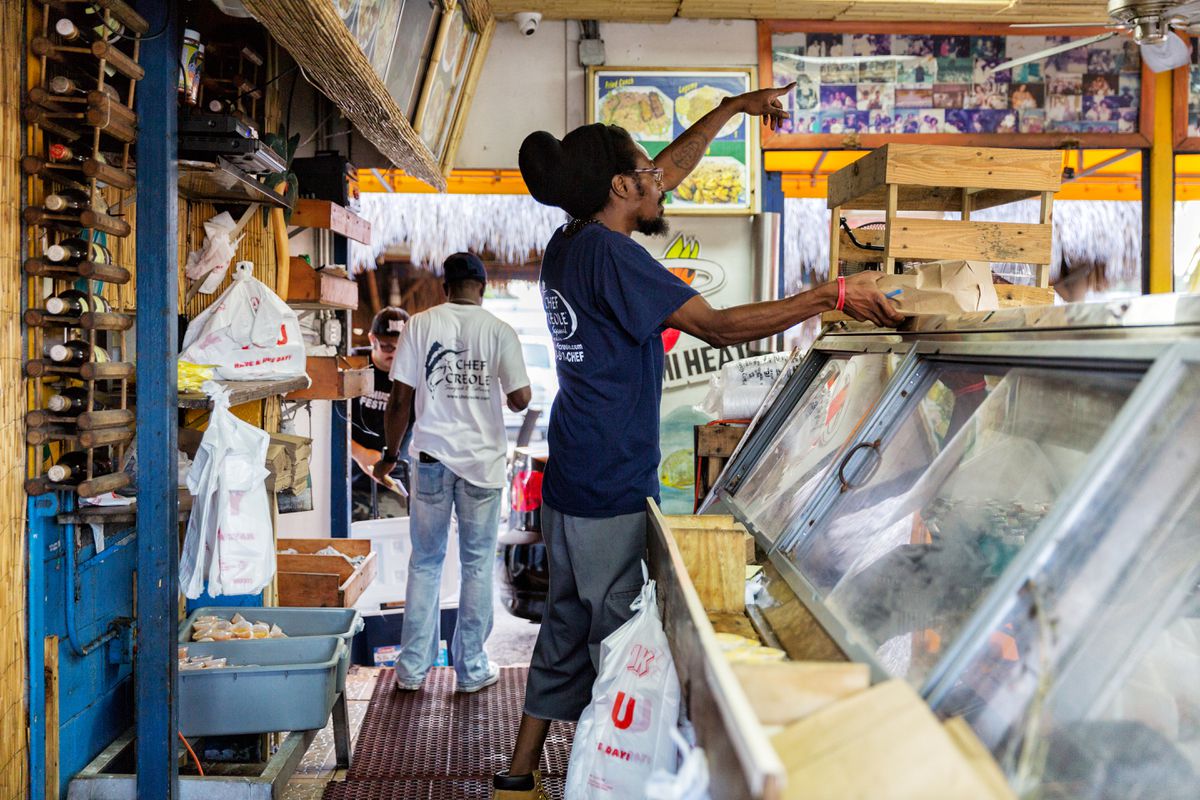 The scene at Chef Creole.

One Haitian business owner, however, has made strides in incorporating non-Haitian clientele into his Haitian customer base and achieving success on the Miami food scene. Wilkinson Sejour, owner of the Chef Creole chain of restaurants, provides many non-Haitian customers with their first taste of Haitian cuisine. English menu boards, English-speaking staff, and added features like a drive-through service make his restaurants more accessible to non-Haitians.

Hear an interview with Wilkinson Sejour

Sejour has also appeared on numerous television shows promoting his restaurants and demystifying Haitian cuisine to the masses with his outgoing, colorful personality. Restaurants like Lecap in North Miami also employ English-speaking employees who can communicate with non-Haitian patrons. These are often first-generation Haitian Americans or the children of restaurant owners who have been raised in Miami — and they showcase how the Haitian community is continuing to grow and thrive as one of Miami’s most vibrant cultural enclaves, and an integral part of the Miami food scene.■

From an ice cream shop to a seafood chain to a bustling flea market.