Haitian cuisine is varied: The food draws influences from French and West African traditions and Caribbean ingredients. These six dishes — from stews to fried meats — serve as a good introduction to the culinary offerings of the Haitian community in Miami. 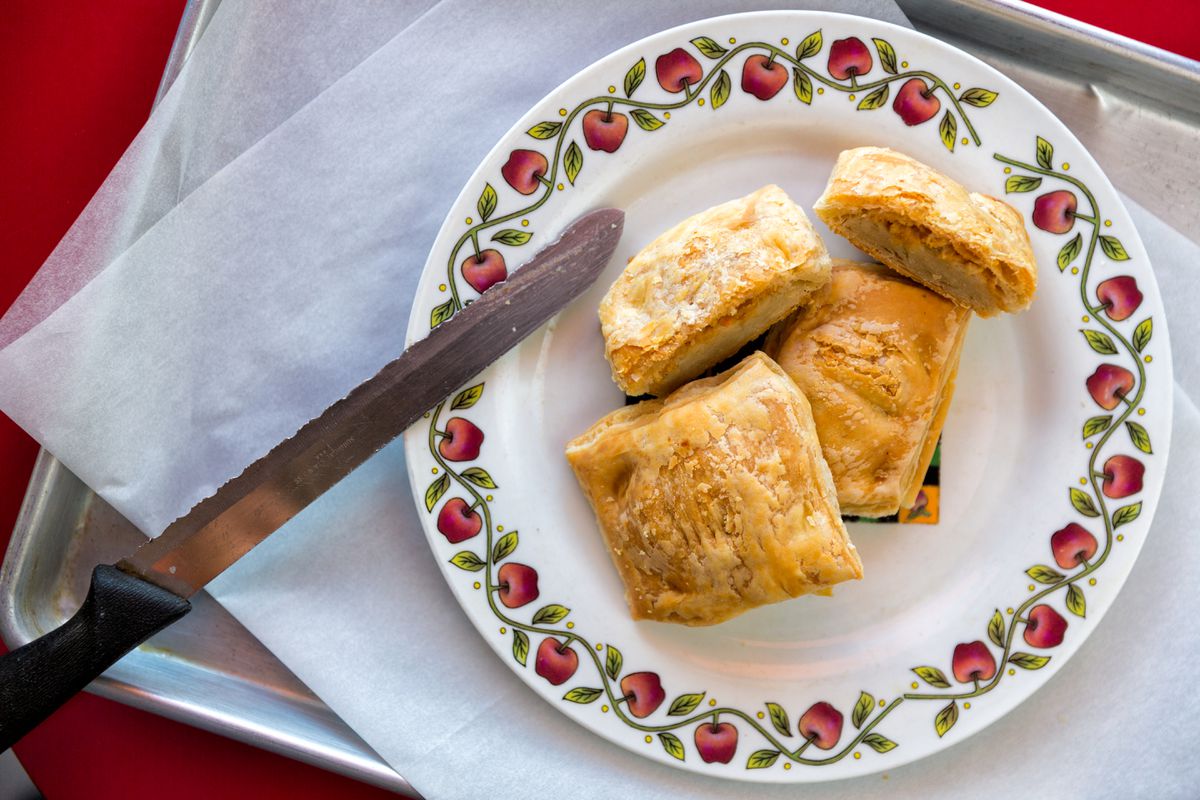 Pate are Haitian puff pastries with savory fillings. In Miami, pate is one of the few Haitian food names that is often Anglicized in English conversation, even among Haitians. Instead of pate, it’s frequently called a patty, usually with the qualifier of Haitian or Creole to distinguish them from Jamaican patties, which are better known to the greater population.

Get pate here in Miami

Pate demonstrate the melding of French and West African foodways characteristic of Haitian cuisine. The dough is made much like French puff pastry, but as in most of the Caribbean, margarine, lard, or shortening often takes the place of butter, typically a luxury ingredient. The dough tends to have thicker, chewier layers towards the middle of the pastry while the outer layers are thin and brittle. The most popular pate fillings are spiced ground beef or salted cod, but other common fillings include ground chicken, ground turkey, or smoked herring. Miami’s Haitian bakeries offer pate at any time of the day, as do an increasing number of restaurants. 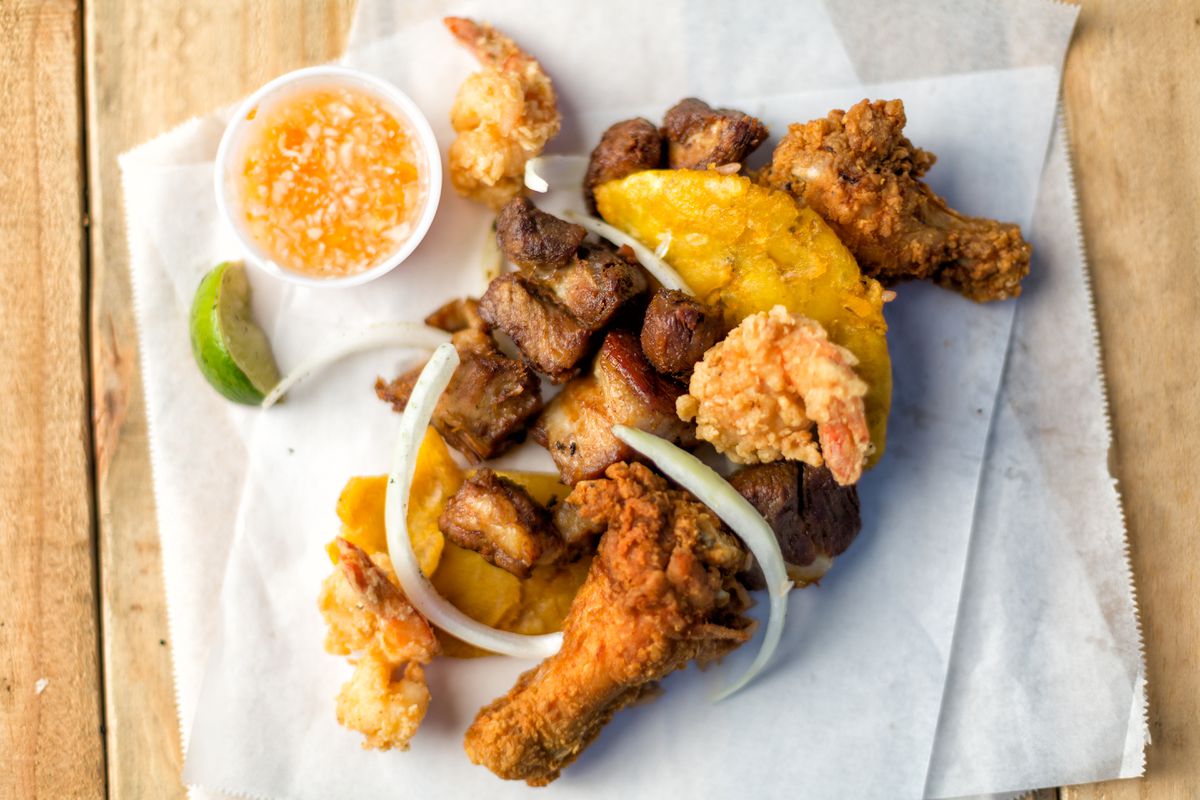 Fritay refers to fried foods. Certain fritay, like the seasoned grated malanga fritters called akra, can trace their lineage directly back to West Africa, where similar preparations exist with the same name. Perhaps the simplest fritay is patat, slices of deep fried white sweet potatoes typically served as a snack or side dish. Bannann peze — fried slices of green plantain that are pressed into flat discs and fried again — are ubiquitous in Haitian cuisine, and similar to plantain preparations found throughout the Caribbean.

Meats require a more complex process. Beef or goat (and sometimes turkey) become tasso, while pork becomes griot (also spelled griyo), which is considered Haiti’s national dish. Preparing the meat typically involves thoroughly washing it, scrubbing it with salt and citrus, scalding it with salted water, and then marinating it in a seasoning paste called epis consisting of parsley, scallions, bell peppers, Scotch bonnet chiles, garlic, cloves, thyme, and citrus juice, along with other herbs and seasonings that vary with each cook.

The meat is slowly braised in its own juices, then fried to yield a crisp exterior and moist, tender interior. Chicken drumsticks receive the same treatment, plus a light dusting of cornstarch before frying to make poul fri, Kreyòl for “fried chicken.” Pikliz, a fiery cabbage slaw preserved in vinegar and generously seasoned with Scotch bonnet chiles, accompanies almost all fritay, its acidity and heat cutting through the richness of the fried meats and vegetables. 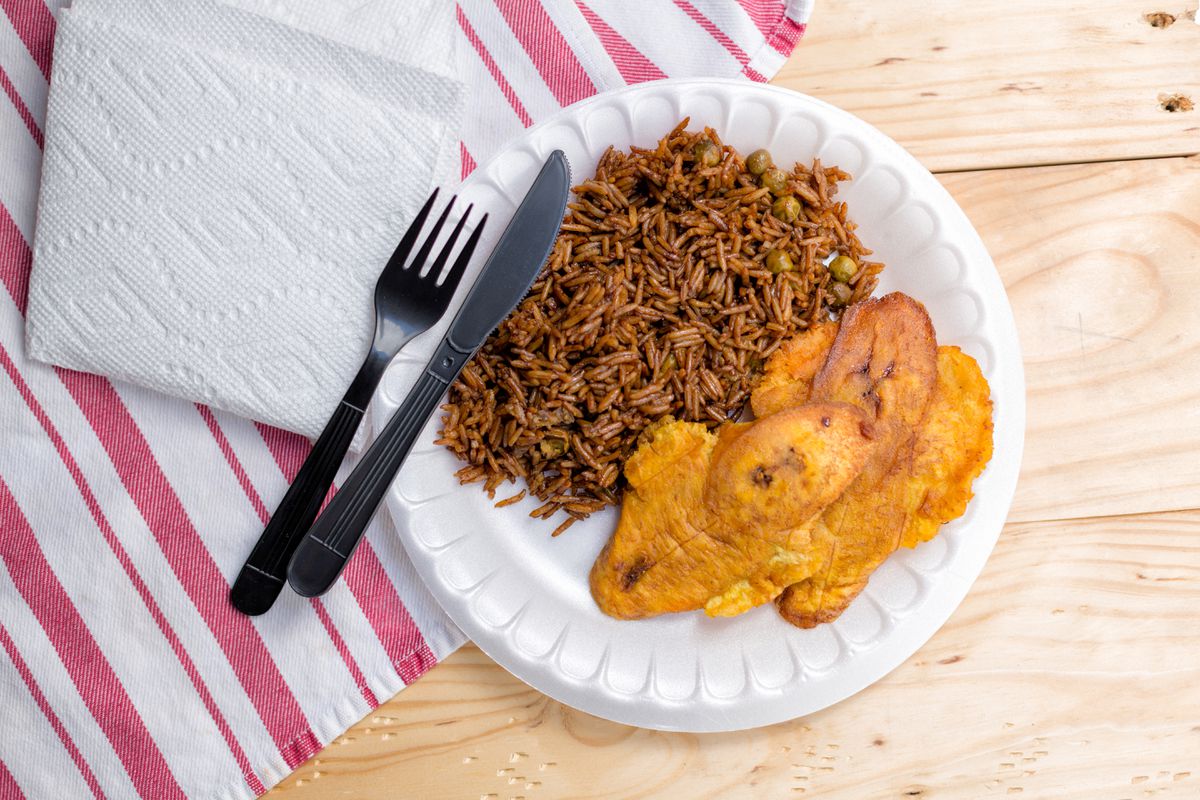 Diri ak djon djon is one of the most extravagant and unique dishes in Haitian cuisine. Often translated as “black rice” or “black mushroom rice,” diri means rice in Kreyòl, and djon djon is the Kreyòl word for fungus, referring to a variety of mushrooms found in northern Haiti. Similar mushrooms are found throughout the Caribbean, but Haitians are the only people in the region to feature them prominently in their cuisine. In the U.S., most markets that serve the Haitian community will import these mushrooms dried. They typically sell for around $64 a pound, making them the most expensive ingredient in Haitian cooking.

Where to get diri mushrooms in Miami

Making diri ak djon djon involves soaking the dried mushrooms in hot water to produce a black liquid in which to cook the rice along with peas or lima beans and seasonings; other additions to the dish include whole cashews and dried or fresh shrimp, creating an aromatic and visually striking finished product. The German manufacturer, Maggi — a brand very popular among Haitians — also produces djon djon-flavored bouillon cubes. Used with inexpensive parboiled rice, these cubes allow for the recreation of a more affordable version, though more traditionally-minded Haitian cooks criticize this approach as cutting corners. Diri ak djon djon continues to be a dish that few restaurants serve regularly, and many families will only prepare it for holidays. It pays to inquire if a restaurant has it on hand or to make a special visit when it is featured as a daily special. 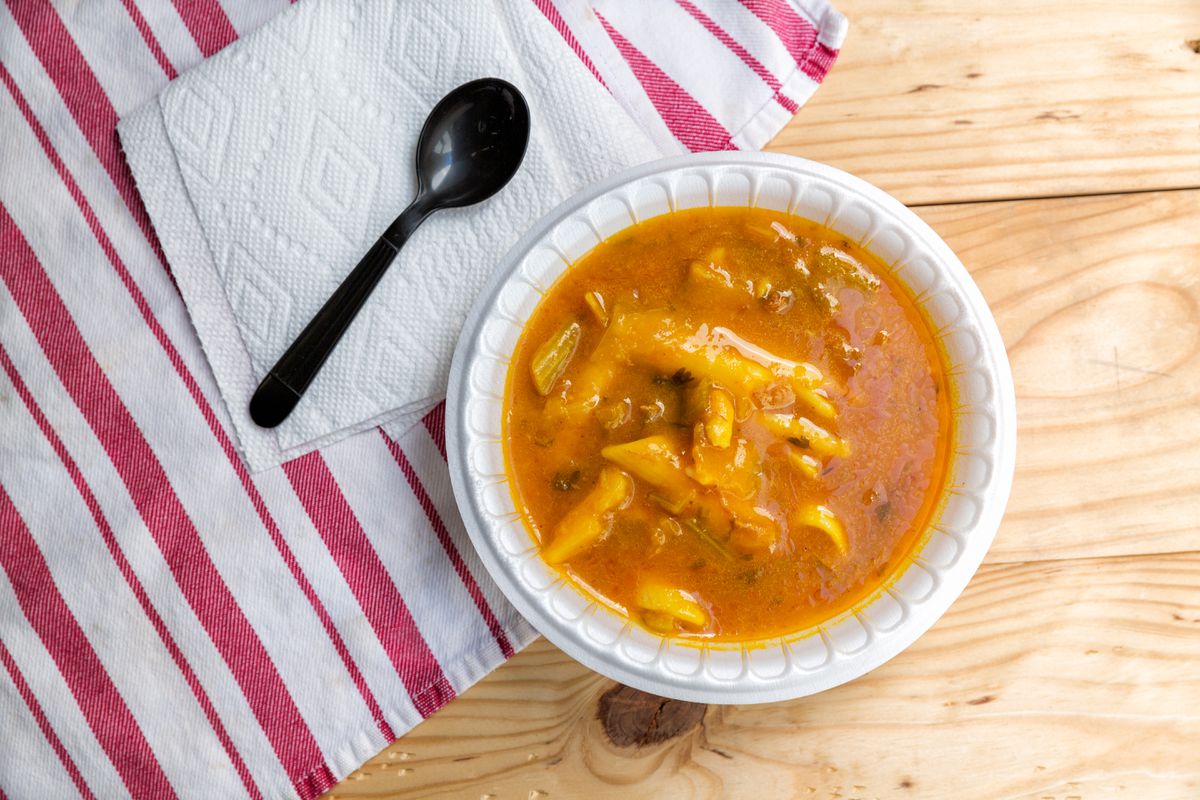 On January 1, 1804, Haiti not only became the second nation in the Americas to gain its independence from European rule but also the first free Black republic. Haiti’s freedom came after a long, violent slave revolt — the first successful one since the initiation of the trans-Atlantic slave trade nearly two centuries earlier. Many Haitians recount tales from that era of a pumpkin soup that the French colonizers enjoyed and forbade slaves from consuming. Some sources claim that slaves were prohibited from even touching the pumpkin used to make it.

Now Haitians throughout the diaspora commemorate their hard-fought freedom every year on New Year’s Day by eating soup joumou, a puree of soft, mild Caribbean pumpkin cooked with beef stock. Cabbage, pasta, carrots, plantains, root vegetables, celery, and various cuts of beef that can include ribs and trotters are added to that soup base, which is seasoned with Scotch bonnet chiles and other herbs and spices.

Soup joumou provides the Haitian community with an emotional and spiritual reminder of their strength in fighting for independence, as well as in facing contemporary obstacles in Miami and Haiti. The soup is strongly associated with January 1, though since it’s also traditional to eat on Sundays at home, many Haitian restaurants in Miami serve it for breakfast on Sunday mornings. Given the challenges that the Haitian community has faced in Miami, it is particularly poignant that this symbol of Haitian perseverance is recreated each week. 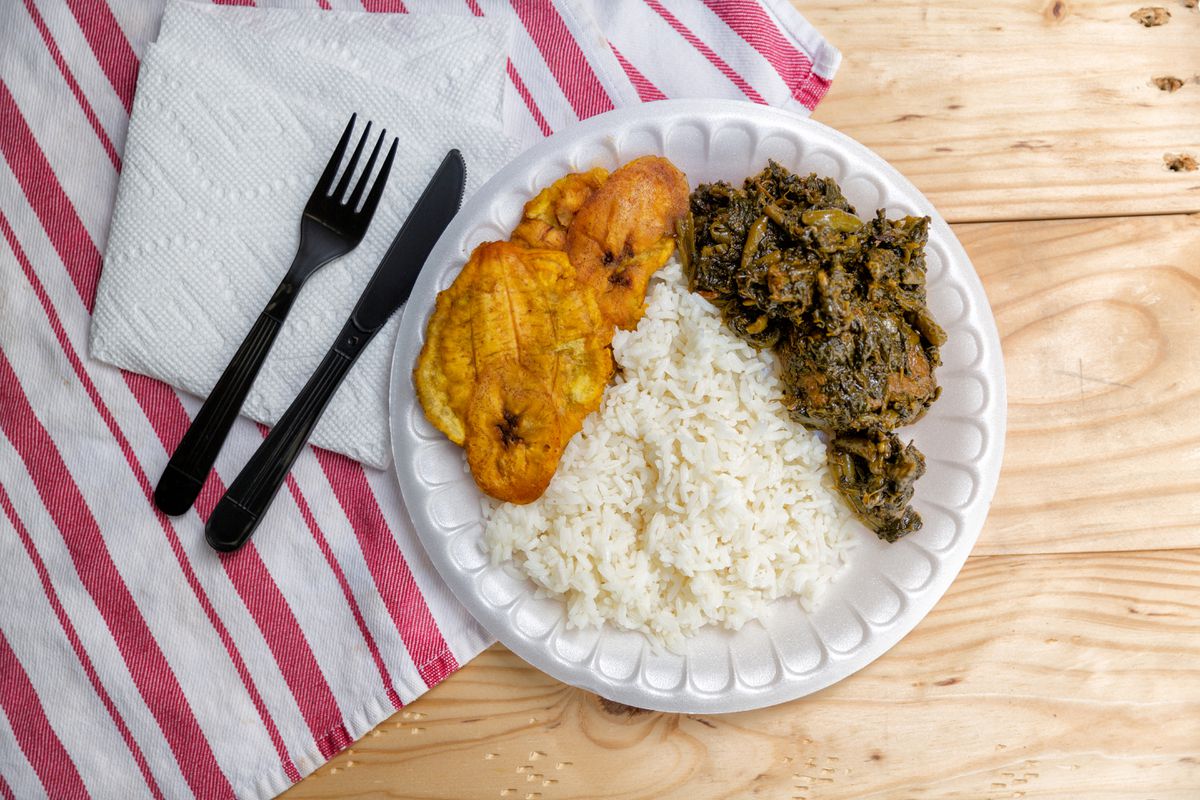 Haitian vegetable stews reflect the strong West African presence in Haiti’s cultural identity. Scholars of African American foodways attribute dishes of stewed leafy greens and other vegetables in the Americas to West African culinary influences; such dishes now abound in many parts of the Caribbean and North America where Africans were brought as slaves. Haitian vegetable stews make use of European, native Caribbean, and West African vegetables, sometimes cooked together. The vegetables themselves characterize each dish; meats can vary and are sometimes omitted entirely. Beef is the most common protein in vegetable stews, though pork, goat, oxtail, crab, shrimp, and other meats are also used. Special occasions will call for a combination of proteins, like blue crab and oxtail.

Legim, which simply translates to “vegetables,” is perhaps the most popular of Haitian vegetable stews and makes use of the largest variety of vegetables. At its base, legim usually contains eggplant and cabbage, but carrots, chayote squash, watercress, green beans, and a myriad of other vegetables are also added and cooked with meat until tender. Zepina, a similar dish, stars spinach and may include a few other vegetables like carrots or lima beans. Another stew, kalalou replaces that spinach with okra (kalalou in Kreyòl). 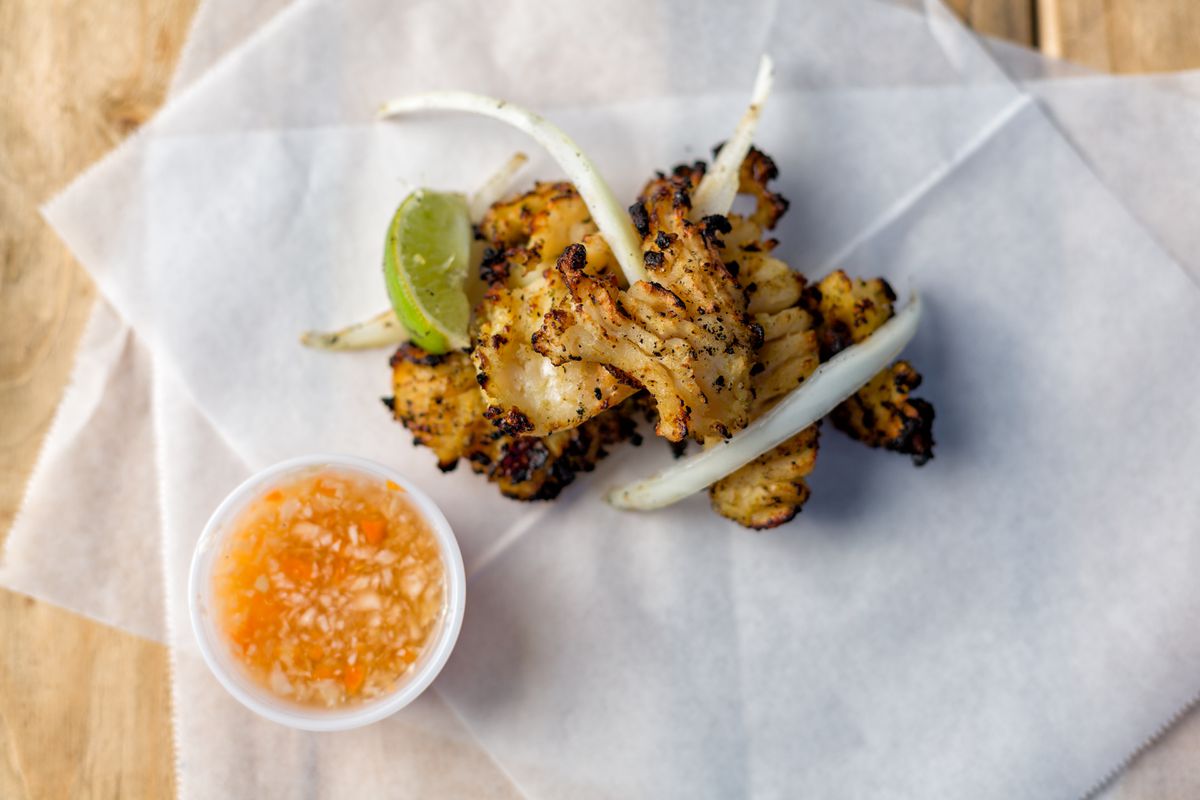 Haiti’s position in the Caribbean Sea means seafood has an important role in the Haitian diet. Haitians often prepare foods like red snapper and spiny lobster on the grill with a simple squeeze of lime and a side of bannann peze (twice-fried green plantains) and pikliz (spicy cabbage slaw). Caribbean queen conch, called lambi in Kreyòl, is a large mollusc unique to the region and relished by Haitians throughout the diaspora, though it is an expensive delicacy and not found at all Haitian restaurants in Miami. The conch meat must be tenderized, or “cracked,” before cooking or it will be unpleasantly tough and reportedly cause indigestion. Beyond being grilled, lambi is also enjoyed fried, in cold salads, or stewed in a spicy sauce.

Where to find lambi in Miami

Beyond its role in Haitian cuisine, the lambi is also an important symbol of Haiti’s fight for independence. By cutting the end of the conch shell’s spiral, one can fashion an effective horn that can be heard over long distances. Such horns were used to gather and organize people throughout Haiti’s history, but most importantly they were used to signal impending French attacks and to mobilize troops during the Haitian revolution. One of Haiti’s most important national symbols is that of a Black man blowing a lambi horn with a machete in his other hand and a broken chain and cuff at his feet.

How a Haitian community emerged in Miami.

From an ice cream shop to a seafood chain to a bustling flea market.