Where to Eat Armenian Food in L.A.

The Armenian restaurants in L.A. reflect the diverse roots of the people who make up the community here. At some restaurants you’ll find Persian-Armenian food, at others, Lebanese-Armenian. There are artisans making cured meat the same way they have for generations, and entrepreneurs blending traditional recipes with American flavors. Together they make a picture of all that Armenian food can be. 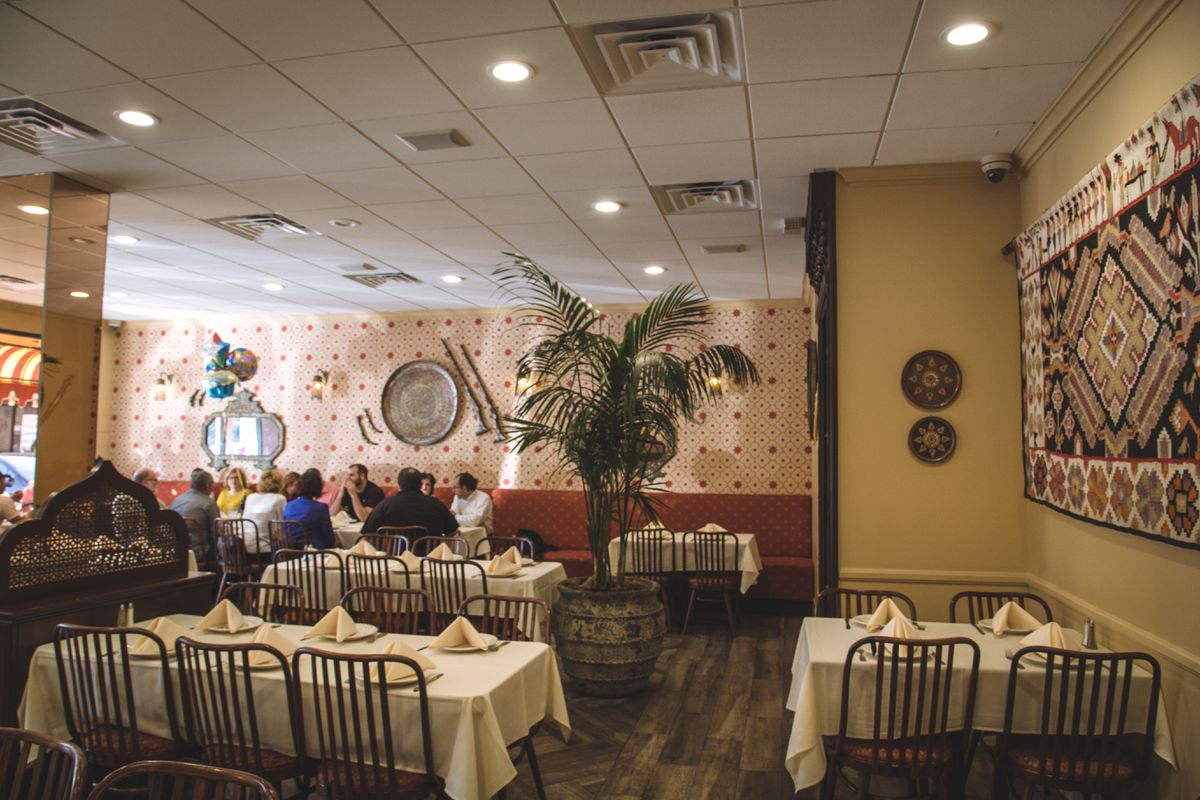 Carousel, in business for close to 35 years, has what’s said to be the finest Armenian-Lebanese fusion cuisine in all of Los Angeles. The original mom and pop location is in a strip mall in Hollywood, but a second larger outpost, decorated with antique copper plates and swords, opened in Glendale in 1998. That newer location is now a bustling community hub, and on Friday and Saturday nights it hosts live entertainment and belly dancing for a packed house.

Carousel’s popularity is a testament to Rose Tcholakian’s homestyle recipes, her husband Krikor’s meticulous attention to detail, and their son Mike’s sharp management skills. In many ways, their success in America is a classic immigrant story. The Tcholakians had a grocery and sandwich shop in Beirut, Lebanon, but when sniper activity began, Krikor couldn’t go to work and started to make basturma and sujuk at home, using the laundry room and rooftop of their house as a factory for his cured and cooked meat.

More about this dish

The family escaped the Lebanese Civil War and landed in Los Angeles, eventually continuing their love affair with food by opening Carousel in 1984. Though Mike pursued a career in electrical engineering, he later joined his parents in the family business.

Every dish here is carefully prepared and the menu is vast, ideal for both vegetarians and meat lovers. Like many other Armenian restaurants, there’s no shortage of kebab here (try the urfa kebab, which includes fried eggplants), but the appetizers, especially eech, an Armenian bulgur salad called “red tabbouleh,” as well as manti (mini meat pies, oven-baked and topped with tomato and yogurt sauces) and cheese boreks are top-notch. 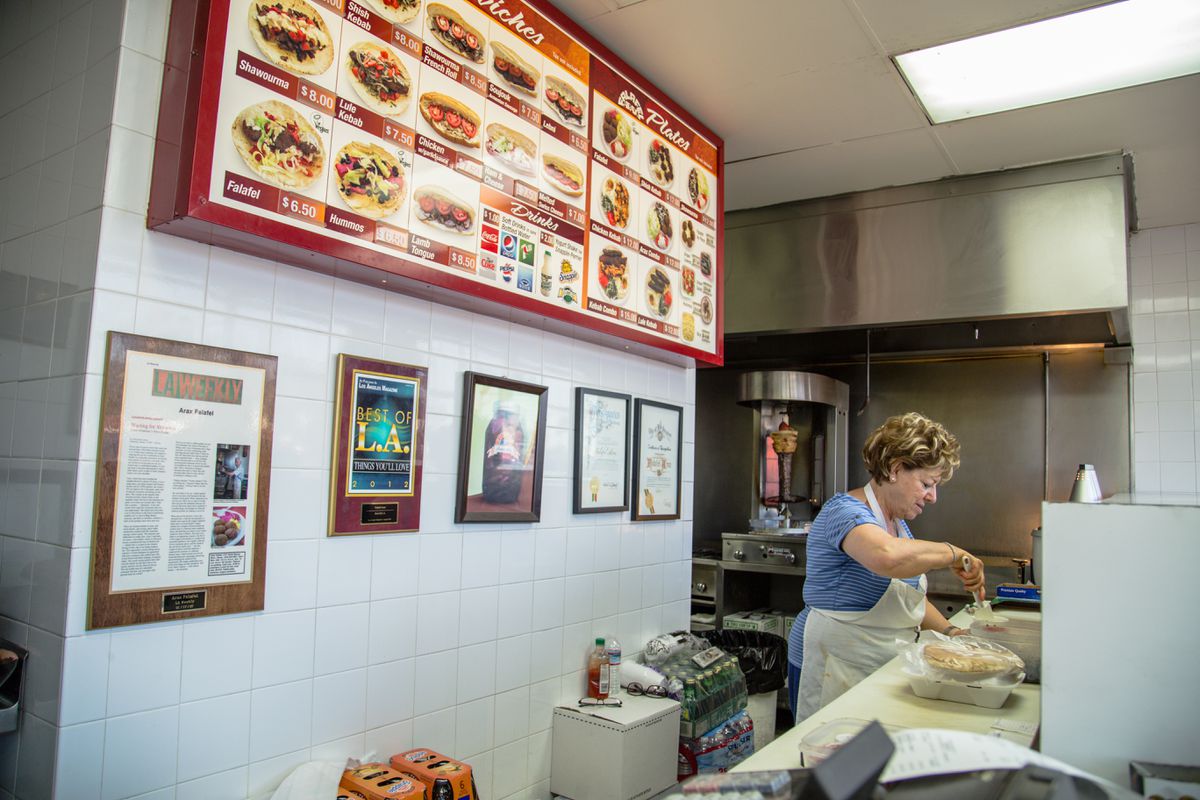 Tucked in an unassuming Hollywood strip mall with a dentist’s office and a travel agency, Falafel Arax is a longstanding staple in Hollywood’s “Little Armenia” neighborhood. It’s a small, no-frills family-run falafel joint with just three red booths and a steady stream of customers coming in and out, placing to-go orders for the restaurant’s unrivaled Lebanese-Armenian delicacies coated in glorious amounts of garlic.

Falafel Arax, Hollywood’s first Armenian restaurant, opened in 1982. It’s owned by the Ohanessians, Lebanese-Armenian immigrants who escaped the civil war in Lebanon. If you’re lucky, you might get a chance to speak to Sossi, the charismatic matriarch of the family who still works behind the counter, or Ardashes, an expert welder who fell into the falafel business through family connections in Lebanon. But their son Anto, who engages with customers as if they were long lost friends, is really the one who has kept this place going since it opened over 30 years ago.

Both the gritty atmosphere and name of Falafel Arax were imported from Bourj Hammoud, the overcrowded Armenian neighborhood in Beirut where refugees and orphans who escaped the Armenian Genocide settled after the collapse of the Ottoman Empire. The collection of flags on the counter — from the U.S., Lebanon, and Armenia — reflects the diverse nature of the environment created here.

Though the made-to-order falafel is the restaurant’s namesake dish for a reason, both the shawarma dripping in beef fat and the sujuk, a spicy Armenian sausage, have cemented Falafel Arax as a delicious portal to the old country. 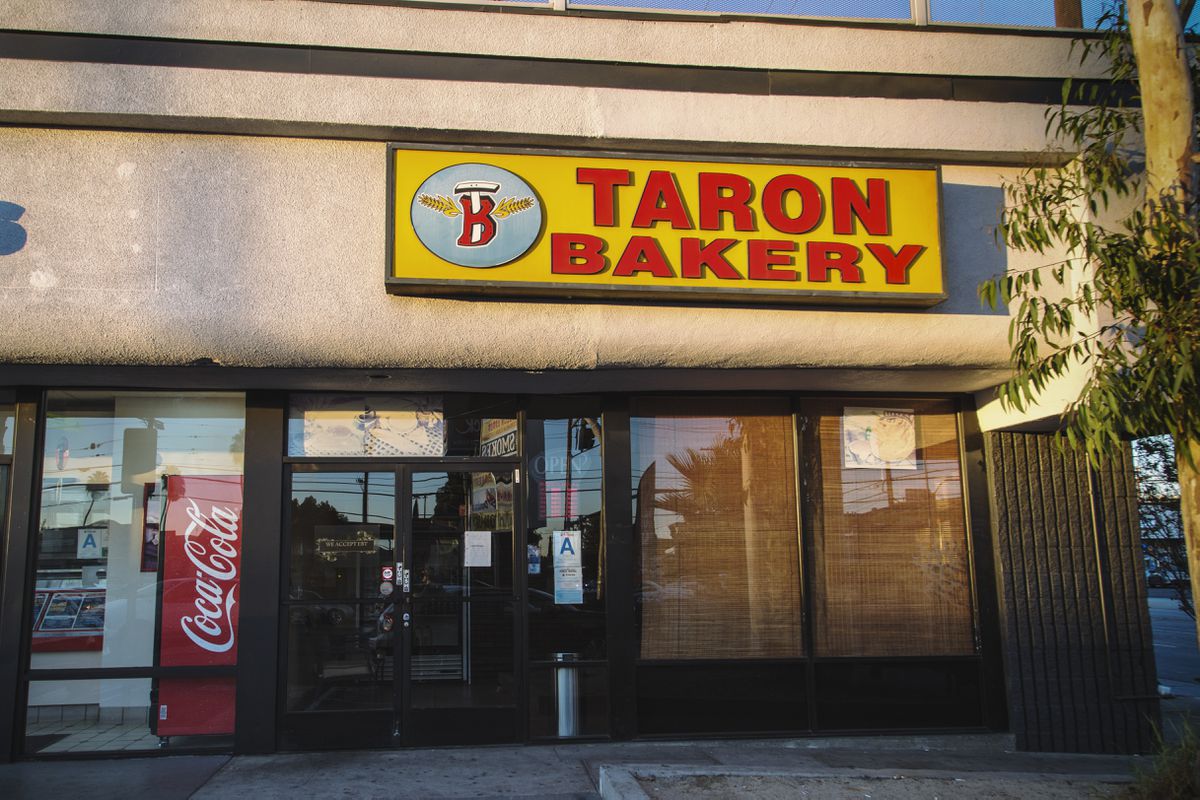 Taron, an old school Armenian bakery with locations in Hollywood, Glendale, and other Armenian-populated parts of Los Angeles, specializes in lahmajun, an open-faced flattened meat pie, often called “Armenian pizza” in these parts because of its similarly thin, circular shape. The lahmajun, meaning “meat with dough” in Arabic, is a dish popular across the Middle East.

Regardless of its origins, Taron’s lahmajun has earned the bakery praise and loyal customers from Armenian and non-Armenian circles alike. It’s a no-frills kind of place — just an oven, a counter, and a few tables and chairs. Its prices reflect the simple atmosphere: Nothing is over $3 or $4. Taron Bakery also makes borek, a pastry filled with spinach, potatoes, or cheese. Wash down a meal with tahn, a salty yogurt drink made all over the Middle East, a perfect companion to lahmajun. 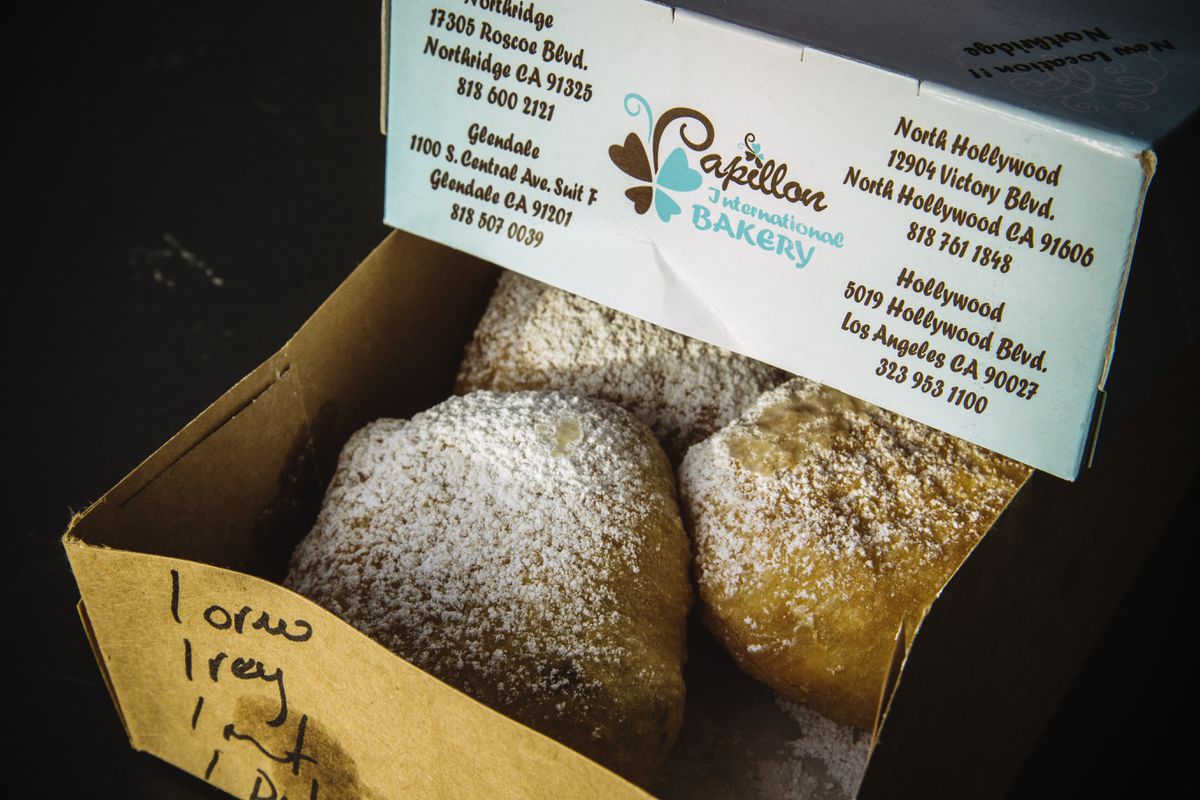 Located in the heart of the Armenian diaspora in Glendale, Papillon Bakery has managed to take classic Armenian delicacies and give them a modern twist in a way that truly reflects what it means to be Armenian American.

Though it first opened in 1996, Papillon took off about six years ago when Jack Akopian and his wife transformed it through their innovative updates to traditional Armenian bakery offerings. Akopian and his family were part of a new era of Armenian migration to Los Angeles, coming to the U.S. from Armenia after the Soviet Union collapsed. Their contributions were significant in diversifying Armenian fare in L.A., as Armenia — and the culinary traditions it developed under Soviet rule — had been closed off from the rest of the diaspora for over 70 years.

Papillon is a small shop. Parking can be hard to come by, and there’s often a line, but the wait is well worth it. Papillon’s glass counter is bursting with endless varieties of ponchiks, custard-filled fried dough balls that are a street food staple in post-Soviet countries like Armenia.

Akopian’s goal was to introduce Armenian food to other cultures and communities, and his bakery offers classic and new takes on ponchiks, including pumpkin, dulce de leche, lemon, and Oreo. The most popular creation is the Nutella ponchik, with its hot chocolate-hazelnut filling and a sprinkling of powdered sugar on top.

Find out more about ponchik and piroshki

The savory piroshki, which is traditionally filled with potatoes or minced beef, also gets an update here. Look for jalapeño nacho cheese, hot dog, and Sriracha al pastor varieties in addition to the mushroom, cabbage, and cheese versions. And of note is the jingalov hats, a flatbread baked with over a dozen types of herbs and greens that is a local specialty in the unrecognized Nagorno-Karabakh Republic, a mountainous region of Azerbaijan populated mostly by Armenians. 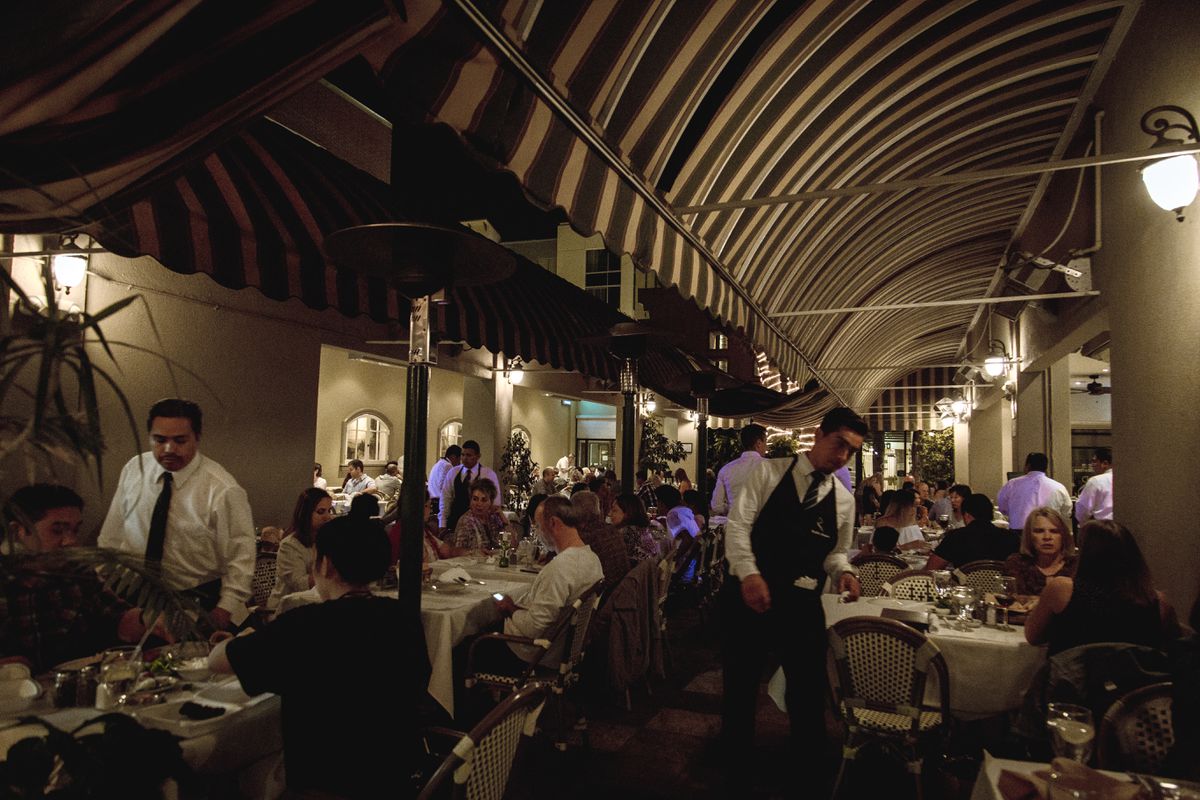 In a courtyard off of one of Glendale’s main streets, Raffi’s Place has attracted customers from all over Los Angeles and beyond for over 20 years. The restaurant — which started off with just four tables and now has 65 — serves up large portions of hearty Persian-Armenian food for nearby office workers on their lunch breaks, then seamlessly transitions to a formal dinner setting where customers can dine on copious amounts of aromatic rice and kebabs under a tree-lined canopy.

Raffi’s Place was opened in 1993 by Rafik and Gohar Bakijanian, Armenian immigrants from Iran who, like many, left as the 1979 Iranian Revolution erupted and changed the political makeup of the Middle East forever. Southern California offered so many immigrants from Iran a home that soon L.A. was often referred to as “Tehrangeles,” a label even Google Maps recognized in 2012.

Learn more about this restaurant

Raffi’s offers a variety of different kebab dishes, but the barg — thinly sliced filet mignon on a bed of rice with charbroiled tomatoes and peppers — is a classic, filling dish. The albaloo polo, rice mixed with cooked black cherries, and ash-e reshteh, a soup made from kashk (whey), garlic, beans, noodles, and mint, are also signature dishes that reflect the rich cooking traditions of the Middle East beyond skewered meat. 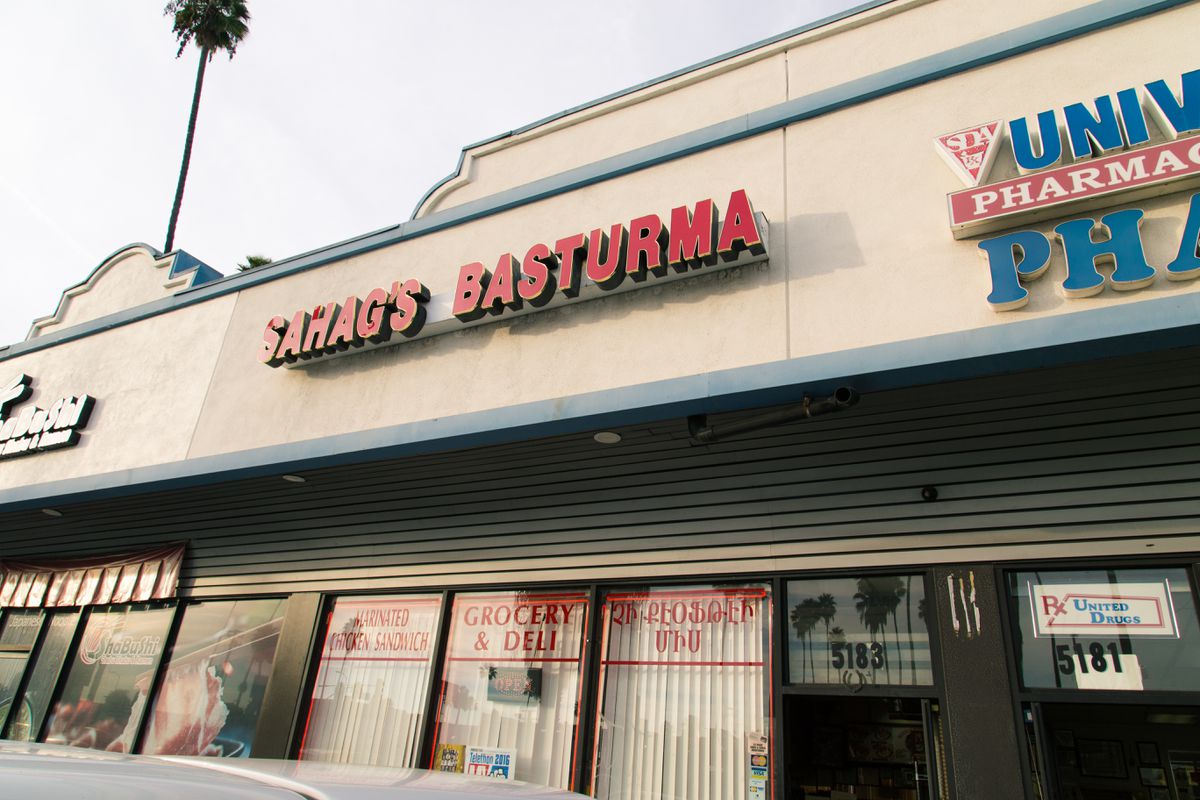 In the heart of Hollywood’s Little Armenia, a deli and sandwich shop continues a 300-year-old family tradition of making basturma, an Armenian air-dried meat cured for 18 days with flavorful spices like hot pepper and garlic. Harry Tashyan is the raspy-voiced, boisterous butcher of this shop, which is decorated with shelves lined with sunflower seeds and sour cherry jam, evil eye charms, portraits of Jesus, and a black and white photo from 1900 of Tashyan’s grandfather preparing the cured meat for which his family has become revered.

Originally from Kayseri, Turkey, Tashyan’s ancestors escaped the Armenian Genocide and landed in Lebanon before settling in Soviet Armenia during the repatriation movement of Stalin’s reign. Tashyan himself was born in the capital Yerevan — where he remembers cleaning garlic for the basturma by the time he was five years old — but left for Los Angeles with his family just before the collapse of the Soviet Union.

More on the Armenian Genocide

Now, the cut and cured meat he sells from his little shop is popular not only with Armenians, but with Turks and Arabs who drive from the next county over to get a taste of maanek, a beef sausage infused with lemon, and sini kufta, a meat and bulgur casserole.

Tashyan’s raison d’être, however, remains the basturma; thinly sliced and expertly cured, it’s perfect between two pieces of Armenian lavash bread and served alongside a cup of thick, Armenian coffee.

How Armenians from all over built a community in L.A.