In L.A., Armenians’ Disparate Food Traditions Live Side by Side

At a falafel joint in a crowded Hollywood strip mall, two hungry strangers squeeze into a red booth and become friends over a late lunch. “Can I sit here?” one asks. “Of course,” the other replies in Armenian. “You’re more than welcome.”

The sun is setting as the smell of garlic and a spicy sausage called sujuk fill the air. A customer washes down his meal with some tahn, a minty yogurt drink, and the cook drops more falafel into a vat of oil while talking to a friend in a mix of Armenian and Arabic, chickpea balls in one hand and a phone in the other. This small, cozy storefront recalls the alleyways of the lively, old Armenian neighborhood of Bourj Hammoud in Beirut, Lebanon, where hospitality is paramount and no one who sits at your table and shares food and drink with you is a stranger. 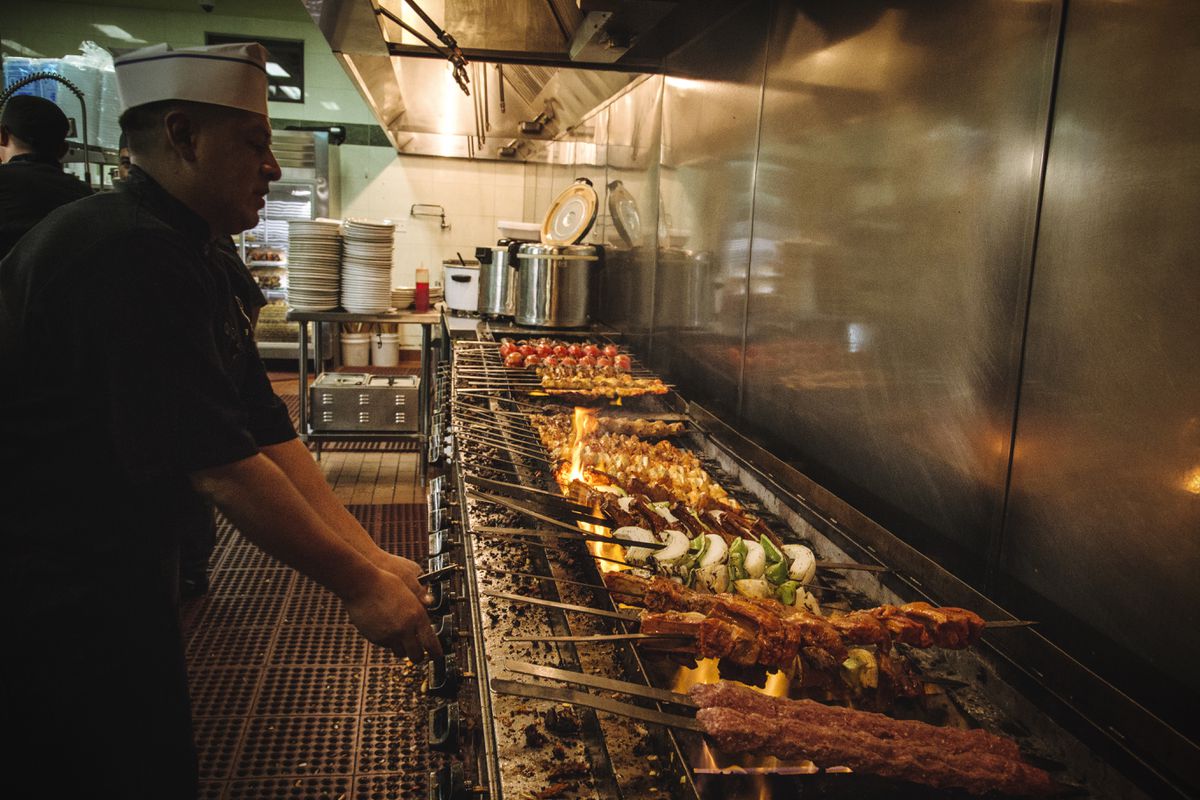 Kebab on the grill.

Just a few miles away, a group of women in a bakery make piroshki, fried dough filled by hand with meat or potato. A street food exemplifying the quickest and cheapest way to eat in Armenia, the piroshki came to prominence during the country’s 70-year-long membership in the Soviet Union, when dishes and culinary traditions were often integrated and shared amongst member countries. Across town, a sit-down restaurant prepares dishes full to the brim with soft, fluffy rice and the ground, skewered beef known as luleh kabab, recipes perfected by an Armenian family from Iran.

All of these components make up part of the modern Armenian food lexicon. In fact, if you want to understand the ancient, diverse, and often tragic history of Armenians, you can start by looking at the food they eat. But this story isn’t an easy one. It’s complex, reflecting the frequency with which Armenians have had to remake their lives as refugees or immigrants in foreign lands.

Armenians have been conquered over millennia by the Byzantines, Romans, Turks, Persians, and Russians. They have also been displaced across the world because of war, revolution, and genocide. Because of this, Armenians are not made up of one place, but of many. Nowhere is this more apparent than in their cuisine, and in no American city is this better reflected than Los Angeles. It is here where these fragmented histories merge and blend, where Armenians have managed not only to find some permanence but to use food as a way to showcase and unify their diverse and scattered nation. 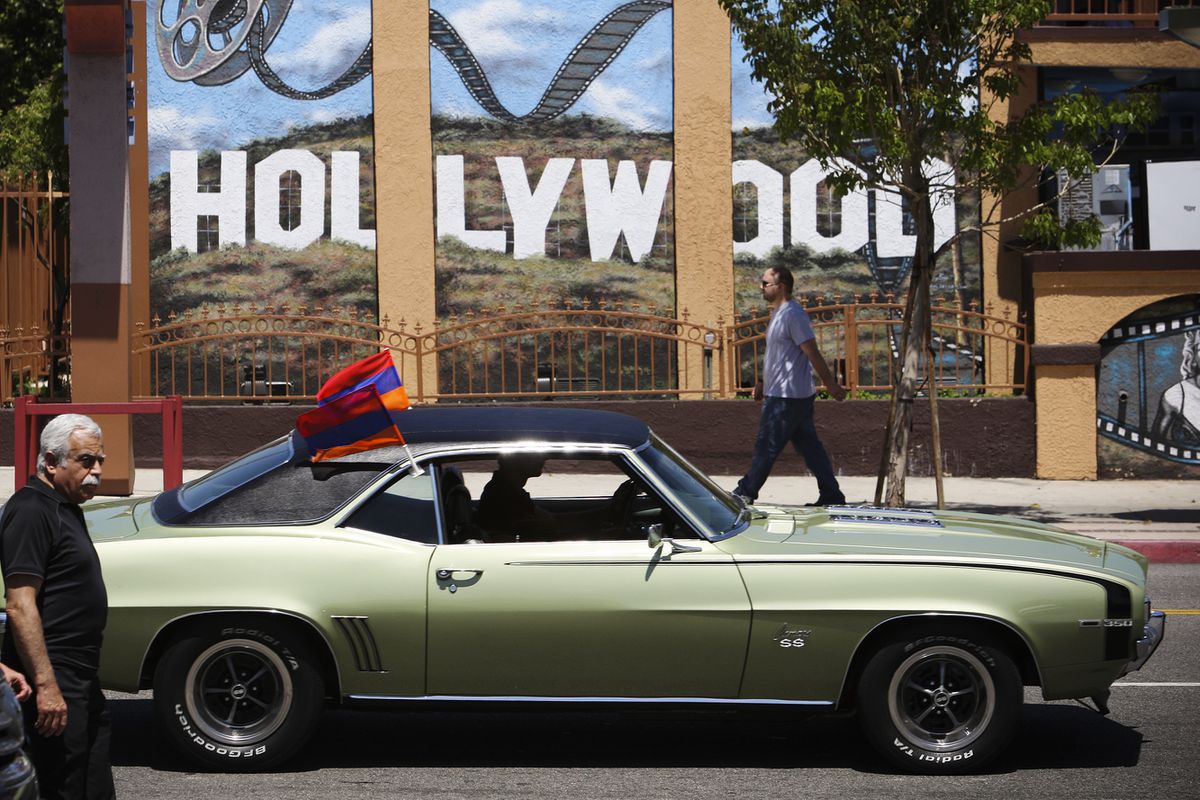 A car adorned with Armenian flags passes a Hollywood themed mural on Hollywood Boulevard near a rally on the 99th anniversary of the Armenian Genocide, calling for recognition and reparations. [Photo: Getty Images]

Armenians are indigenous to what is known as the Armenian highlands, which includes parts of Iran, Georgia, Azerbaijan and present-day Armenia. This historical homeland also encompassed parts of modern-day Turkey. Beginning in 1915, the Ottoman government systematically killed over one million Armenians in what is now known as the Armenian Genocide. In the decades leading up to WWI, Armenians, essentially regarded as second-class citizens, appealed first domestically, and then internationally to gain more rights, though both attempts failed. For the failing Ottoman Empire, WWI presented an opportunity to resolve — through deportations and massacres — what was known as the “Armenian Question.”

As the declining Ottoman Empire entered World War I on the side of Germany, the Turks feared that the Armenians, a Christian minority, were sympathetic to their main enemy, Russia. After the Ottomans lost an important battle against Russia just before the outbreak of the war, Armenians were blamed for the loss. Officials spread anti-Armenian propaganda and portrayed the community as disloyal subjects of the empire. With Armenians out of the way, this also created a more homogenous society based on Turkish national identity.

Deportations and arrests of Armenian intellectuals began on April 24, a day that is now commemorated by the worldwide diaspora, when many establishments, including restaurants, are closed.

Those who escaped and survived the atrocity found safety across the Middle East in places like Lebanon, Syria, Iran, and Iraq, as well as France, Cyprus, and even Ethiopia. In their host countries, Armenians thrived, assimilating yet also keeping their traditions, culture, and Christian religion alive. They took their foodways with them, adding to and being heavily influenced by the cuisine of their new homes as they opened restaurants, delis, and bakeries in Beirut, Aleppo, and Tehran. 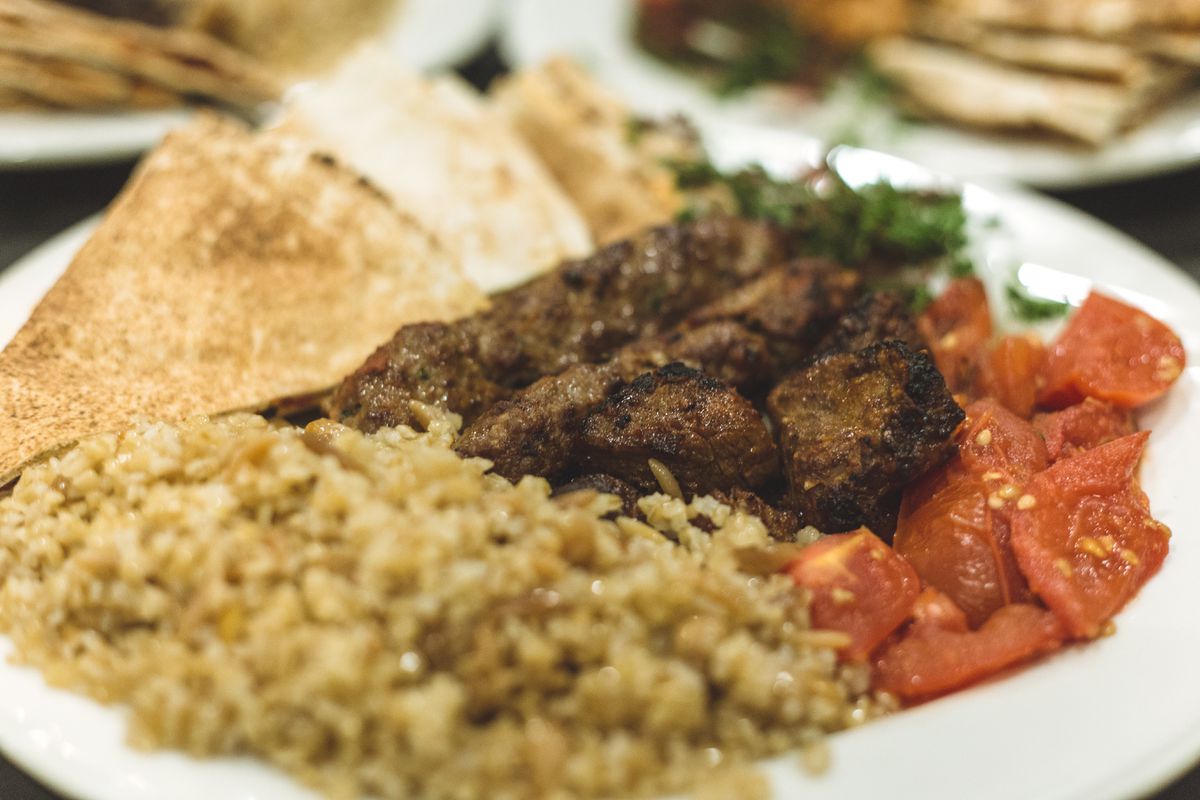 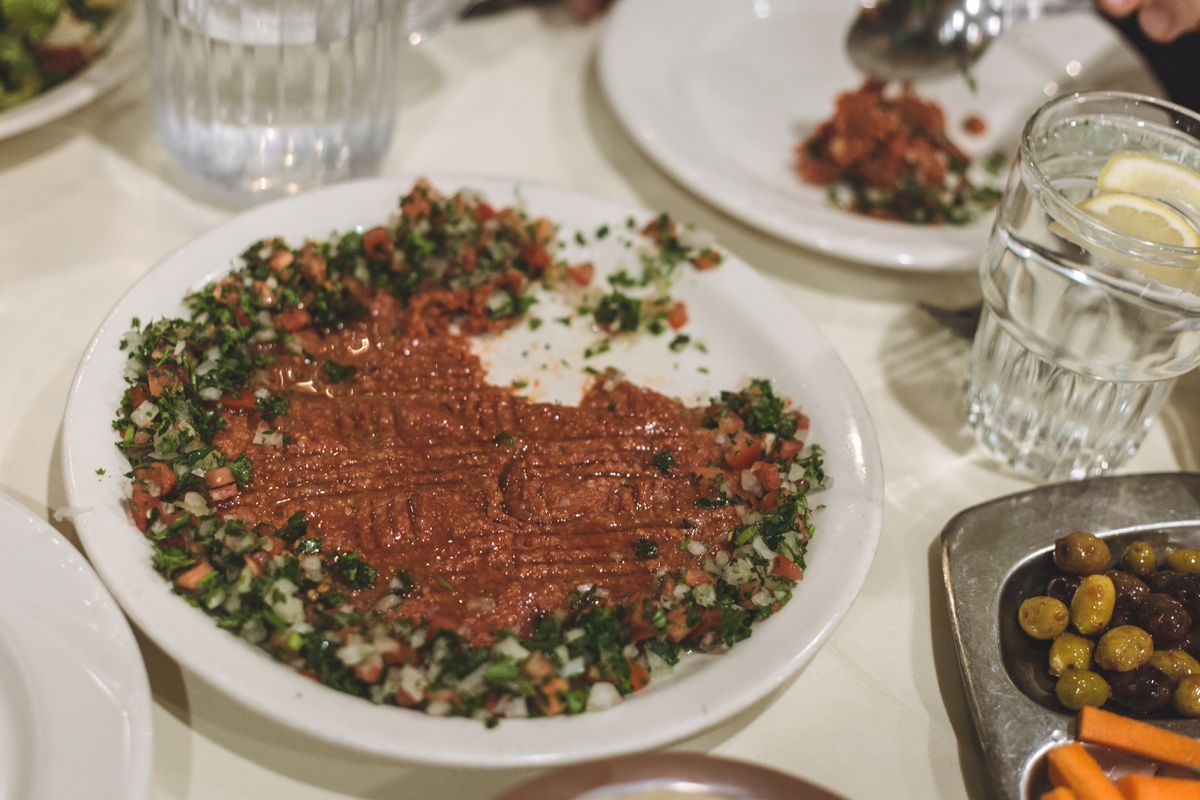 Kebab and kibbeh nayyeh at Carousel.

Meanwhile, the cuisine of those who still lived in Armenia diversified under other geographical influences and political changes. Western Armenians, for example, lived alongside Muslim neighbors for eons, and lamb figures prominently in their cuisine, notes Barbara Ghazarian, author of Simply Armenian: Naturally Health Ethnic Cooking Made Easy. Armenians who grew up in what became the Soviet Union favor pork, an ingredient that grew in popularity when Armenia became part of the USSR in 1922.

An ancient community with over 3500 years of history, Armenians have been migrating to America for centuries — as far back as the Jamestown Colony, when “Martin the Armenian” was recorded at the first permanent English settlement in America in 1618. But it wasn’t until the 1890s and early 20th century that the number of Armenians in America began to significantly increase. 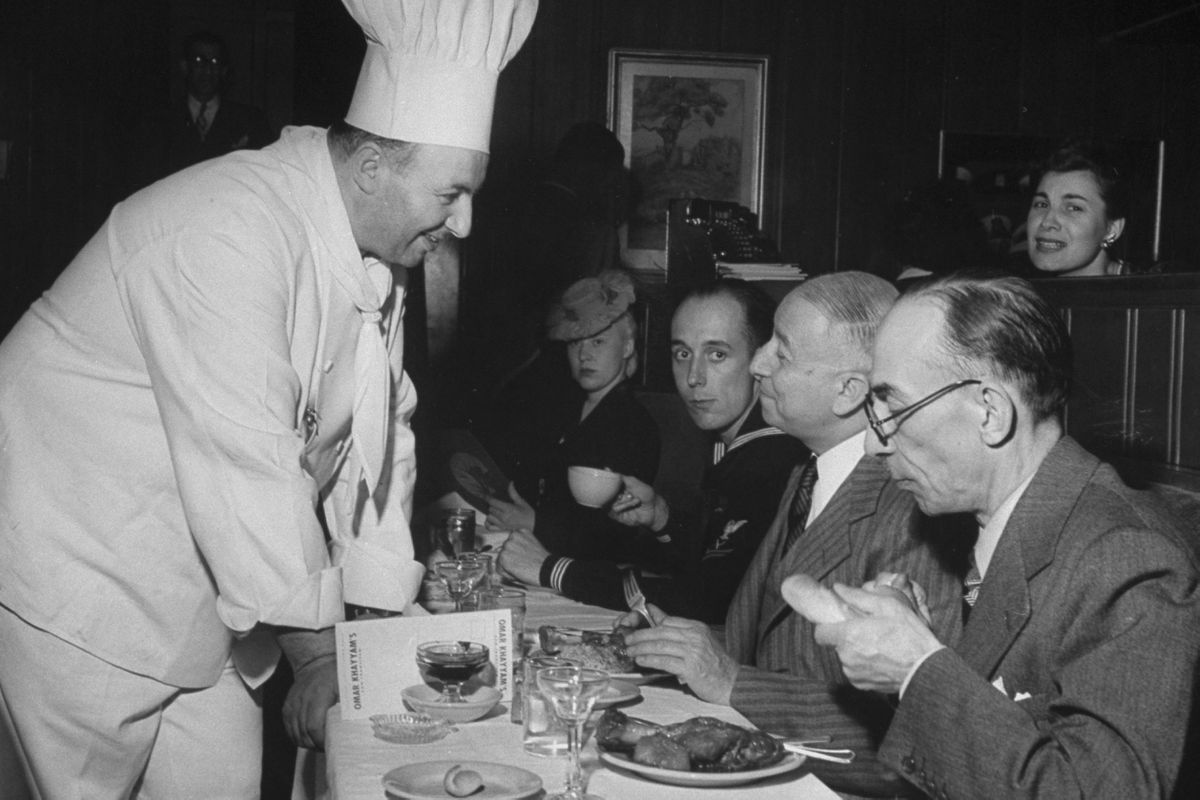 Thousands made their way to America in the late 19th and early 20th centuries, settling in places like Boston, a port city, and Detroit, a popular draw in part because of its thriving auto industry. Further west, Armenian immigrants, many of them farmers, ended up in California’s Central Valley, particularly Fresno, where the dry climate and farmland resembled the look and feel of their lost homeland. It was here where George Mardikian landed after fleeing the Armenian Genocide in Turkey, becoming the revolutionary chef who introduced America to Middle Eastern food through his popular restaurant, Omar Khayyam’s, in the 1930s.

Many Armenians began migrating towards the rapidly growing city of Los Angeles, where a community (along with many other immigrant populations) had already begun to put down roots. In the 1970s, massive waves of Armenian immigration to L.A. took place, first with Lebanese Armenians escaping the Lebanese Civil War and then Iranian-Armenian refugees leaving because of the Iranian Revolution. The ‘90s saw huge numbers of Armenians arriving in Southern California, fleeing the food and electricity shortages after the collapse of the Soviet Union and war with neighboring Azerbaijan over the disputed territory Nagorno-Karabakh. 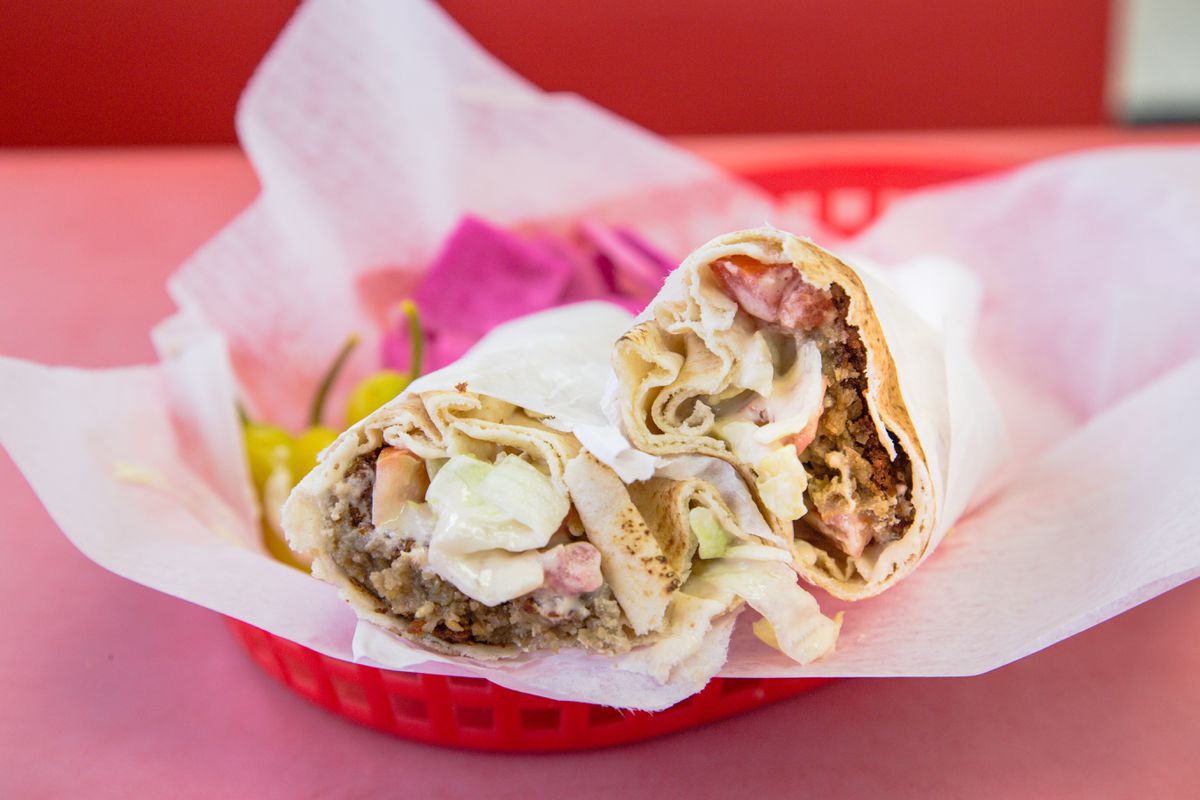 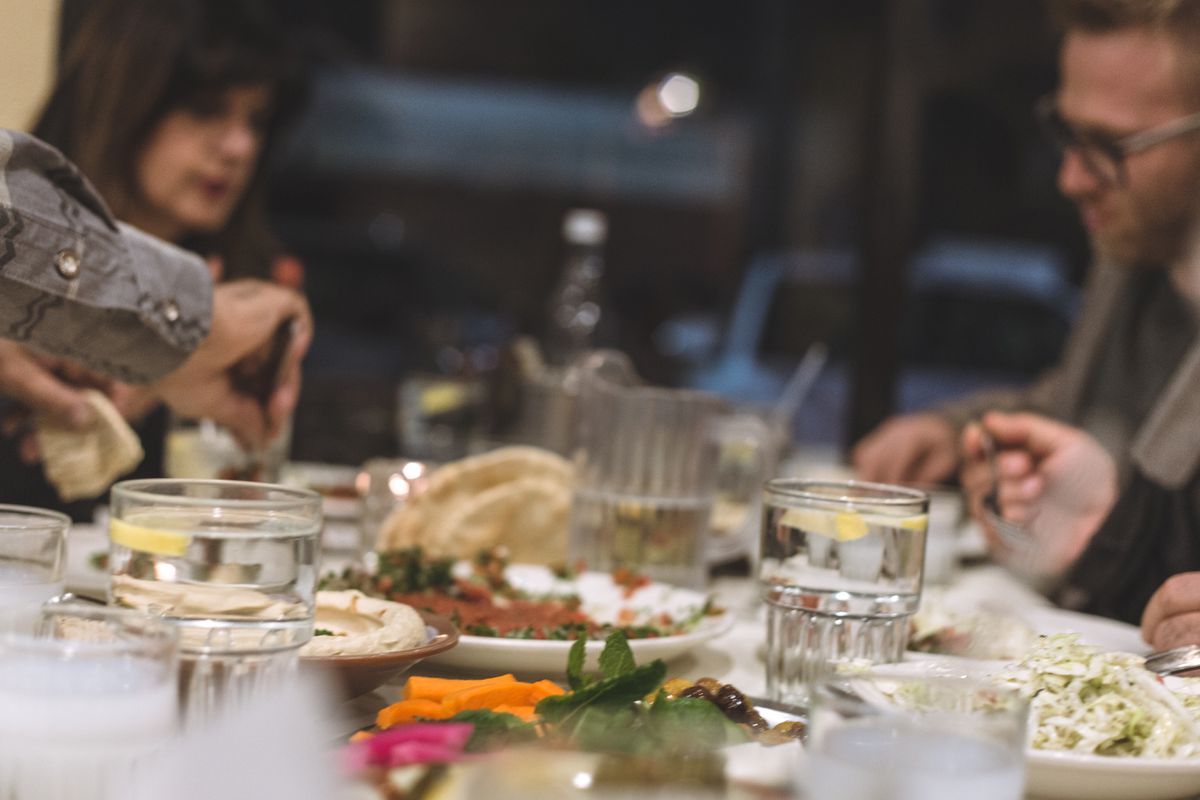 Falafel from Falafel Arax and a meal at Carousel.

Today, there are more Armenians living around the world than there are in Armenia, a country that celebrated its 25th anniversary of independence from the Soviet Union in 2016. Los Angeles is now home to the largest Armenian population in the U.S., and the second largest in the world next to Moscow. Settling in Hollywood, Glendale, and surrounding cities, Armenian Americans have contributed to politics, entertainment, education, the business sector, and of course, food in the area — adding to the vast and diverse culinary landscape in and around L.A.

Each particular Armenian sub-group — separated by dialect, culture, and politics — has contributed its food traditions to the city, the one place where the different Armenian cultures fully exist side by side. Levantine Armenians brought lahmajun (“meat with dough”), an open-faced meat pie of Arabic origin, and za’atar, a pungent mix of oregano, thyme, and other herbs and spices. Armenians from Iran brought their penchant for jeweled rice (named for the saffron color of the rice laced with nuts and gem-like fruits) and salty fish, while Armenians who left Soviet Armenia introduced khash — a dish made of boiled cow’s or sheep’s feet — and aveluk, or sorrel that grows wild in the mountainous highlands country.

The diversity of the Armenian population has complicated the definition of Armenian food, both inside and outside the Armenian community. What an Armenian from Armenia considers to be native cuisine isn’t exactly what an Armenian from Jordan might classify as Armenian food. And in the Caucasus and Middle East where tensions run high, a discussion about the origin of food can quickly escalate into a heated argument. This is especially true when it involves (and it often does) countries with which Armenians have long, historic disputes. 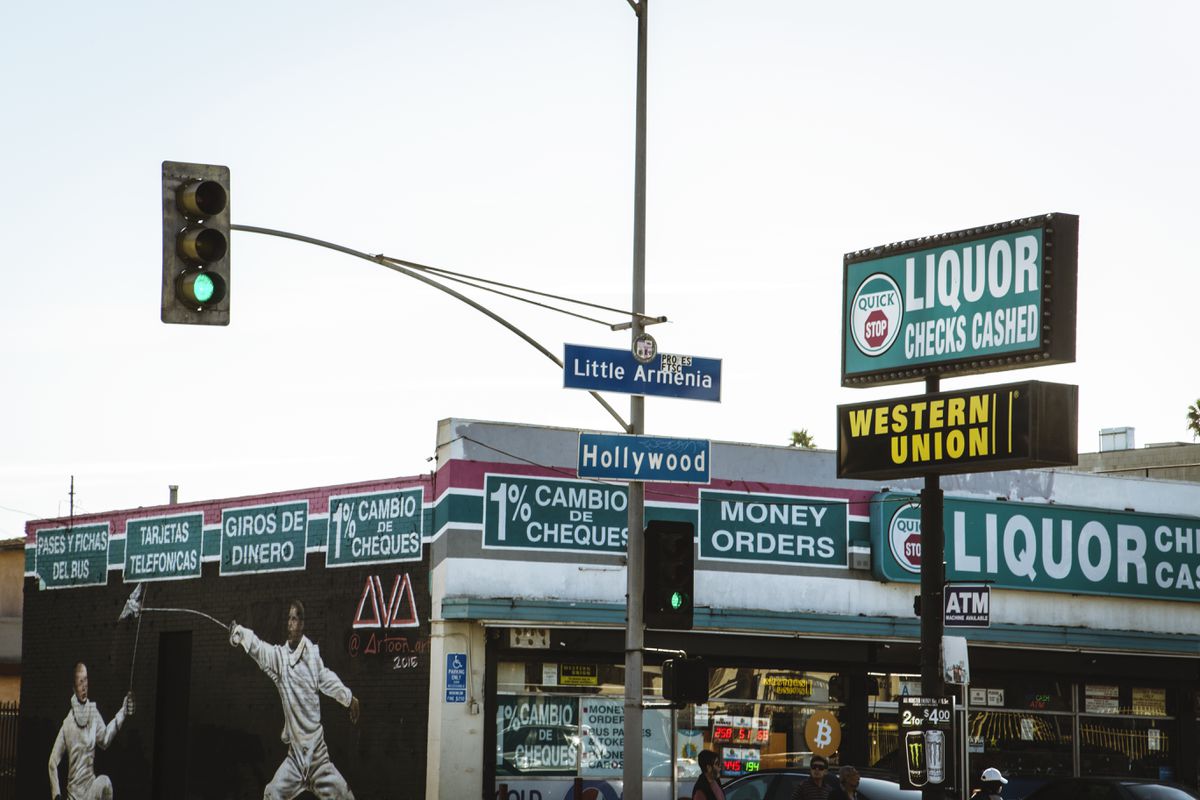 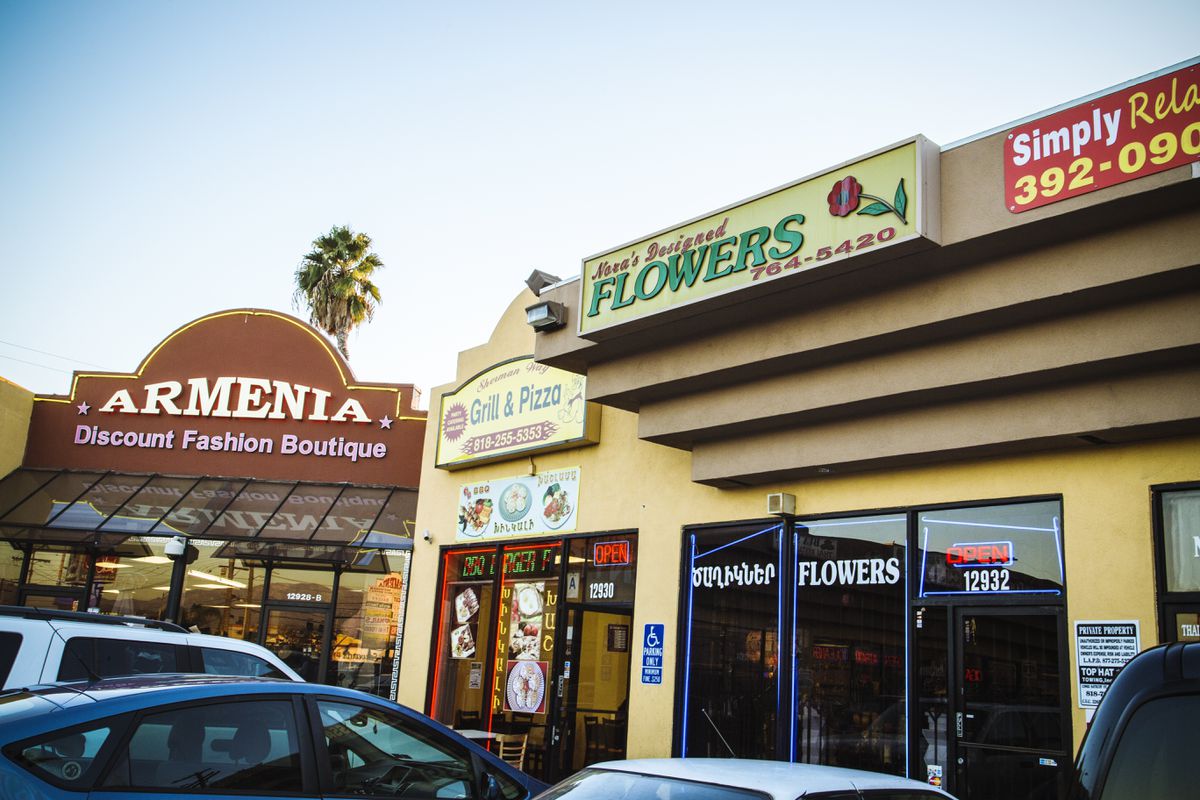 Since Armenia was once on the Silk Road, cooking traditions transcended borders and moved with the people. The location of the country, too, made it a perfect battleground for regional adversaries like the Persian and Ottoman Empires, who fought over and conquered the land. These events changed the food customs as well. The mobility of food traditions is reflected in dishes like dolma, literally “stuffed,” in Turkish. This is a common stuffed vegetable dish shared among peoples of the Middle East, Caucasus, and Balkans.

As the Armenian population in Anatolia was essentially destroyed during the genocide, its cuisine was absorbed into the newly formed Republic of Turkey (where dishes retained Turkish names), and was carried across the world by immigrants, often refugees, who helped preserve and pass down these traditions to the next generation.

Those traditions not only remain pillars of Armenian cuisine, but have become staples of modern American cuisine as well. As descendants of the Hittites, an ancient Anatolian civilization who perfected the art of making bulgur thousands of years ago, Armenians may very well be one of the original propagators of cracked wheat — a major component of the cuisine that shows up in appetizers and soups today. The same can be said about madzoon, or yogurt. It was indeed Armenian immigrants who introduced the stuff to the American palate in the 1920s, through companies like Colombo Yogurt later acquired by General Mills. 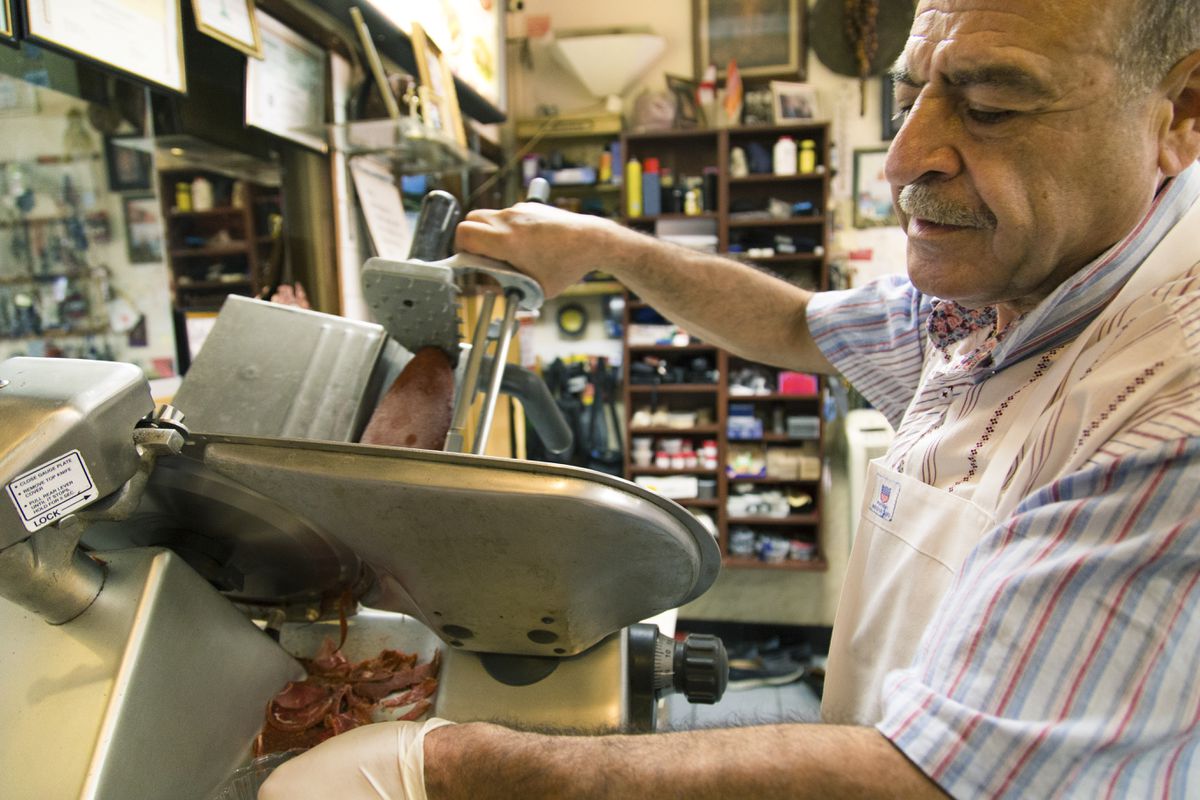 Armenian cuisine is still shifting today. An influx of Syrian-Armenian refugees — many of them descendants of Armenian Genocide survivors — have had to uproot their lives once again due to the ongoing civil war. Thousands have relocated to Armenia, where newly opened restaurants and bakeries are changing the culinary landscape of the country.

In Los Angeles, the addition of dozens of Armenian grocery stores carrying black walnut jam, shelves of strained yogurt, a plethora of herbs, and fresh deli staples have allowed the continued cultivation of the cuisine inside homes across the city. Butcher Harry Tashyan’s Hollywood deli shop, Sahag’s Basturma, has been carrying on his family’s centuries-old craft work of making basturma — an Anatolian cured meat. Food businesses have also adapted to the particularly fusion-rich cuisine of Southern California, making sure Sriracha hot sauce is available on every table and infusing piroshkis with al pastor, a dish from Mexico influenced by the shawarma meat brought to the country by Lebanese immigrants. 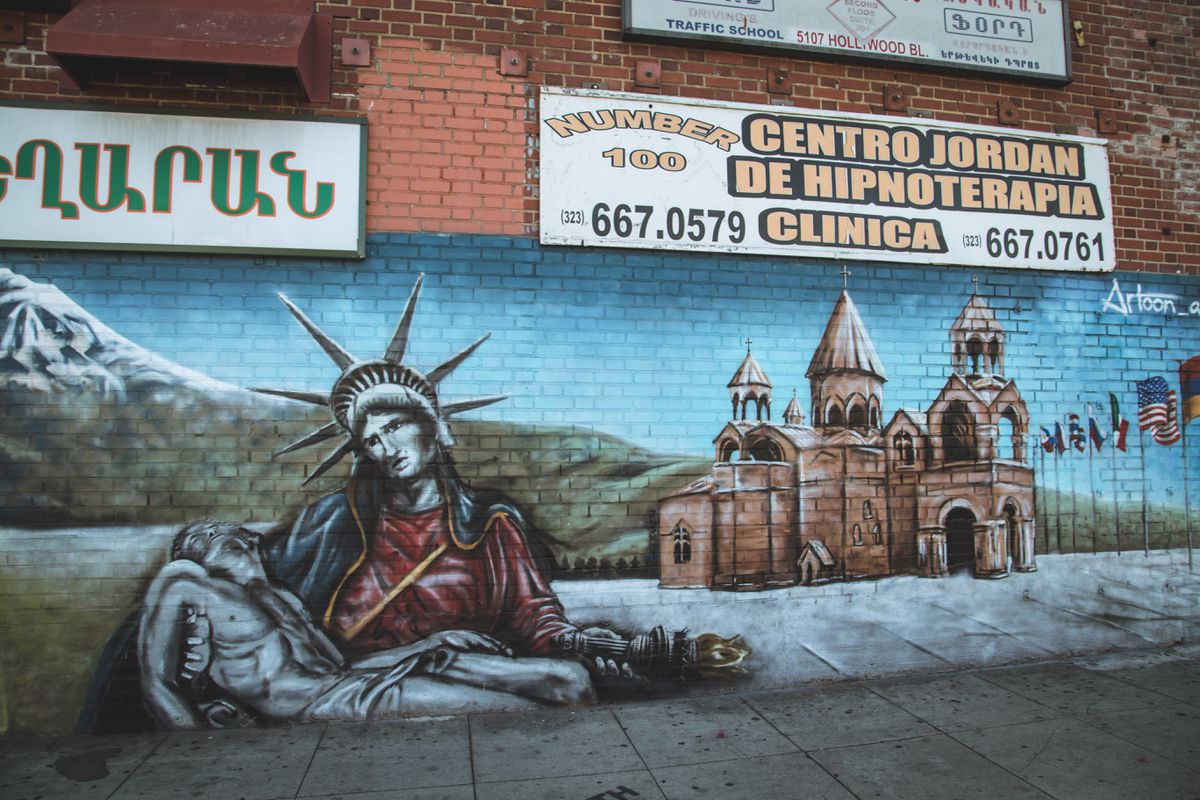 A mural in Little Armenia.

Despite a fractured history, the Armenian-American immigrant story reflects one of reinvention and resilience. The Armenian table, laden with food, has certainly played a big role in keeping Armenians together. Eating has become a ritual, a place to keep memories, identity, and tradition alive. Los Angeles, too, is now part of this story. It has given a far-flung community some permanence, a chance to finally grow and flourish, in both culture and cuisine.■

From a falafel shop to a cured meat specialist to a Persian-Armenian mainstay.