Six Armenian Staples to Seek Out in L.A.

The dishes listed below have disparate roots — some show Russian influences, others are distinctly Middle Eastern — but all are a part of Armenian food culture. From dumplings to stuffed vegetables to hearty soups, these flavors tell the story of a community that has repeatedly faced persecution and forced migration, picking up new dining traditions as it sought refuge around the world. 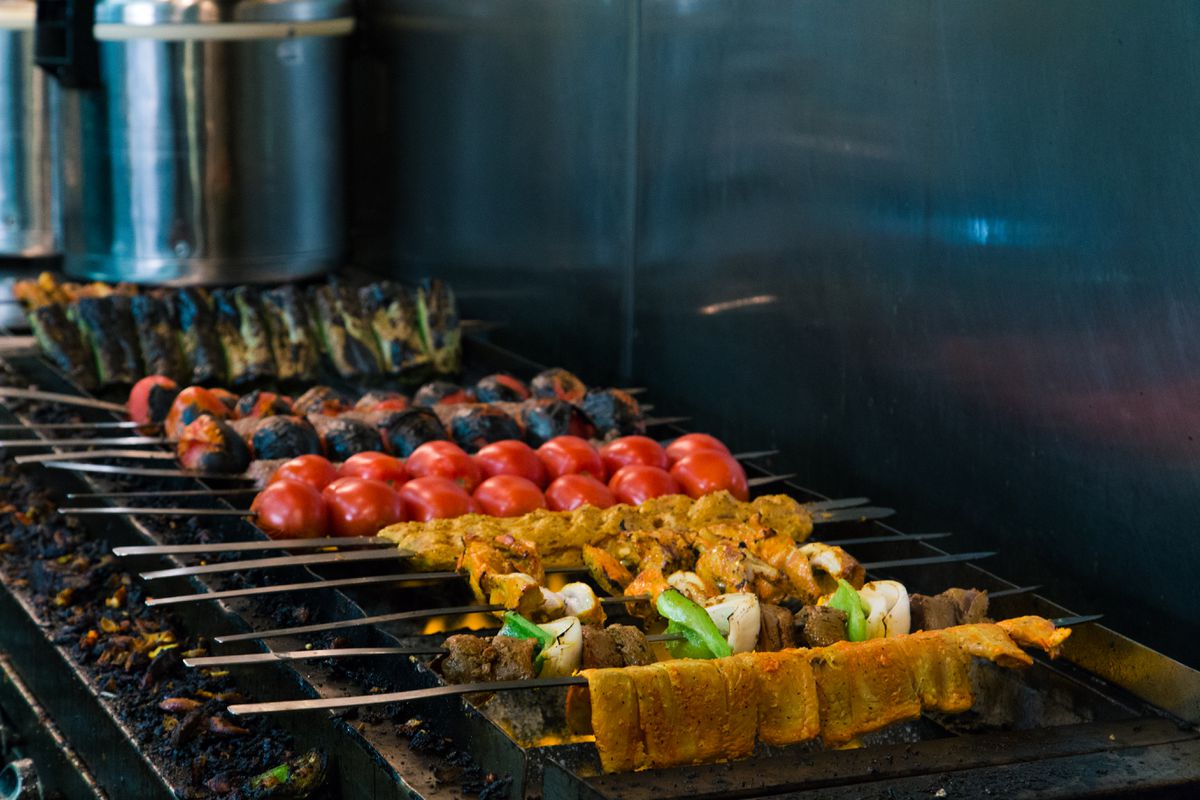 Historically, Armenian Orthodox fasting days, which numbered approximately 160, contributed to a diet rich in vegetables and herbs, says Armenian cookbook author Barbara Ghazarian. However, meat in the form of kebab, kufteh (balls of minced or ground meat), and sujuk (a spicy Armenian sausage) also plays a prominent role in Armenian cuisine. In the U.S., like in many other centers of the Armenian diaspora, grilling meat became a ceremonial all-day activity that revolved around the love of family, music, and tradition. Everything from prepping the meat on skewers to cooking them on homemade “shish kebab” machines is a communal activity.

As usual, there are subtle differences depending on where you’re from — Armenians from Armenia prefer using pork instead of traditional lamb, thanks to Russian influence during the Soviet era, while Syrian Armenians prefer their lamb kebabs simmered in cherry sauce.

Hear more about urfa kebab and other Lebanese-Armenian specialties

Kebab in its various forms is now prevalent in American cuisine as well, served across the country in diners and even mainstream chains like Applebee’s. In Los Angeles, the kebab features prominently on menus at Armenian restaurants across the city. At Carousel, the urfa kebab, minced beef skewered with eggplant and spiced tomatoes, is one of the most popular dishes. The name “urfa” refers to the city in southeastern Turkey where Armenians were a native population before the massacres of the late 19th and early 20th centuries. 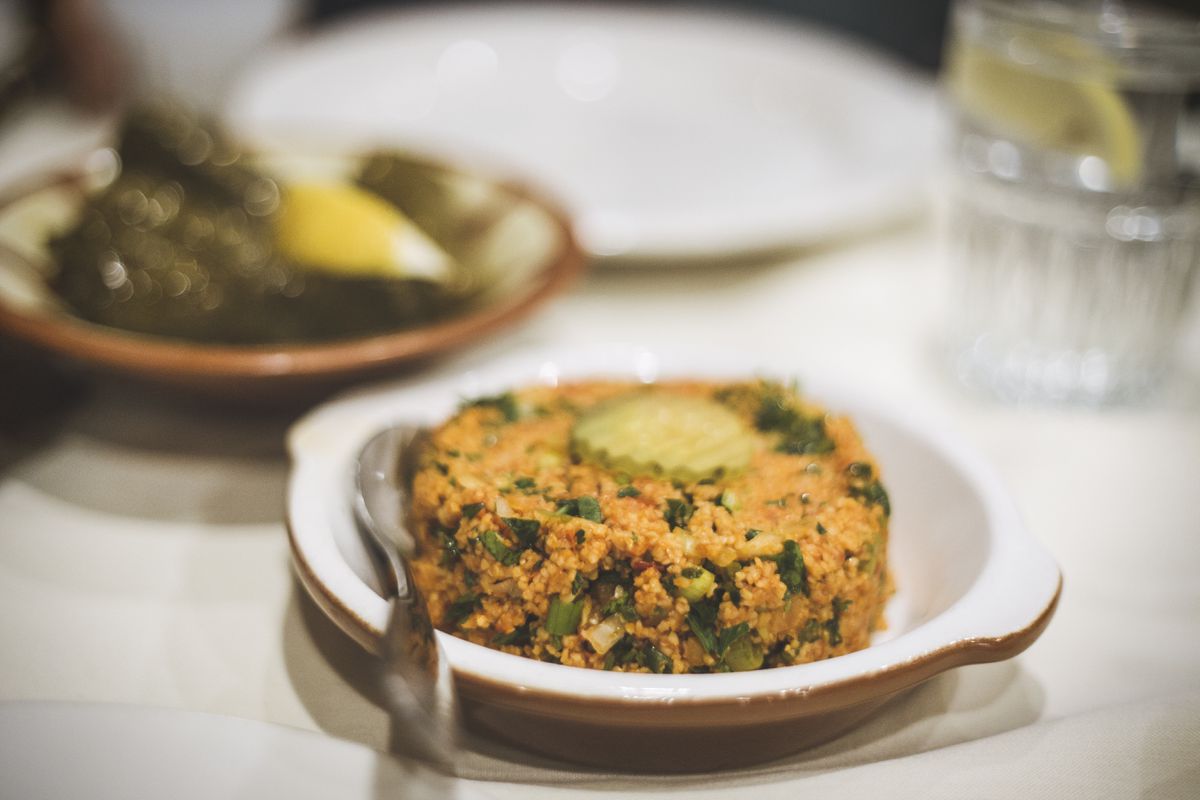 While neighboring Georgia, Iran, and Azerbaijan use rice, wheat is the primary grain used by Armenians. Armenians are said to be descendants of the Hittites, an ancient people in Anatolia who were one of the first populations to cultivate wheat. This cultivation has survived with Armenians for thousands of years.

“Every conqueror in history has gone through there, and the land has been ravaged with famine and pestilence,” Armenian-American chef George Mardikian wrote about Armenia and its people in his 1944 book, Dinner at Omar Khayyam’s. “Yet these peoples have been able to survive because they have been able to save or somehow acquire this bulgur which has given them enough vitamins to resist the effects of famine.”

One wheat dish that has survived and remained a part of Armenian dinner tables both at home and in restaurants is eech, a bulgur salad similar to tabbouleh. The dish, eaten before and during a main meal, includes olive oil, onions, lemon, mint, basil, parsley, and sautéed tomatoes, which give it its signature red look. Eech is a testament to one of the defining characteristics of Armenian cuisine: a concentration on simple yet fresh ingredients in dishes that complement and enhance each other. 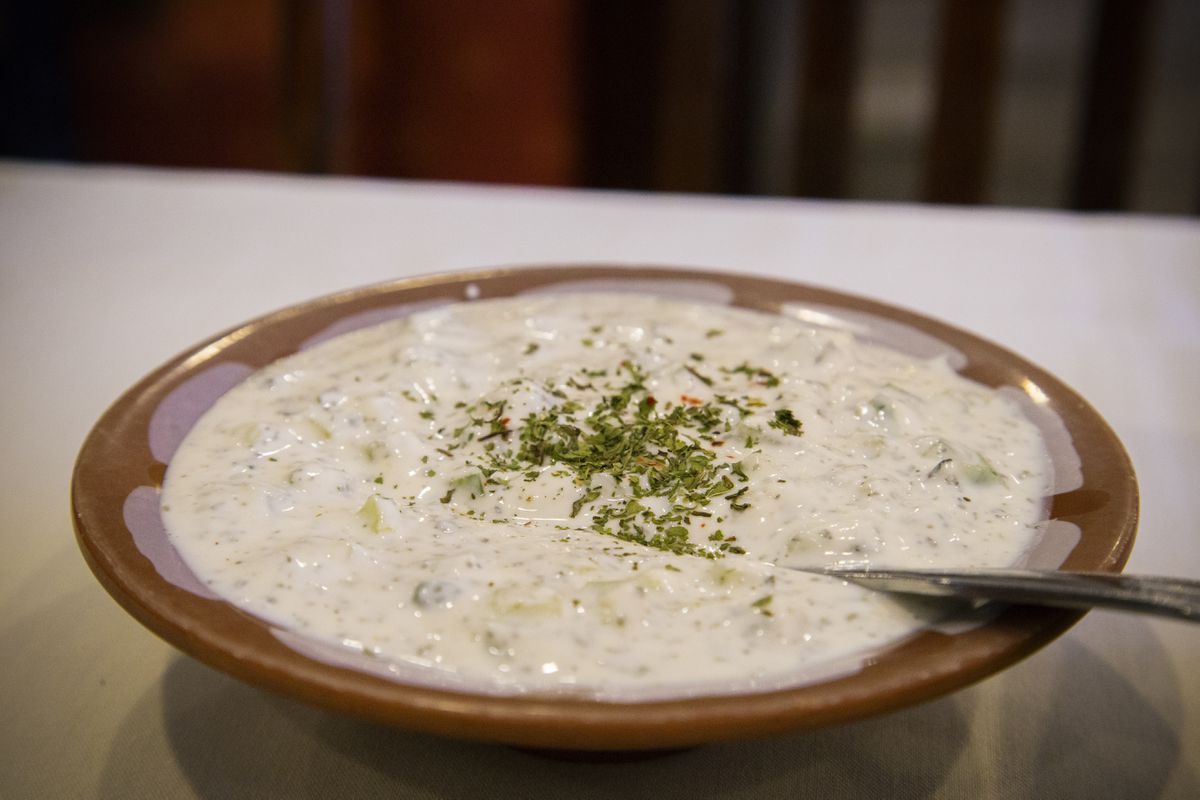 When Armenians first began arriving in America in large numbers at the turn of the 20th century, they brought with them a sour, thick fermented milk product they called madzoon — better known as yogurt. Back then, early Armenian Americans were so well-known for making it at home, that if you wanted a yogurt starter to make your own, all you had to do was knock on the door of an Armenian household. A big part of cuisines across the Middle East and Mediterranean, yogurt has almost a mythical status among Armenians — not only is it a source of protein, it’s also believed to protect against a plethora of infections and diseases, and is even used to cure sunburns.

These days madzoon has been incorporated into the American diet as its health benefits have become widely known. For Armenians, it has remained a central aspect of their cuisine. It’s often drizzled over foods like manti (meat dumplings), and served in various other forms, ranging from tahn, a salty yogurt drink often paired with fried food, to appetizers like a yogurt and cucumber dip called jajik.

Get tahn at Taron Bakery

Armenian Americans have gotten in on the game of mass distributing yogurt to the rest of the country, too. Places like Karoun Dairies, founded in Hollywood in 1990, now manufacture cheese, tahn, and a variety of yogurt-based products found in virtually every major supermarket across the country. 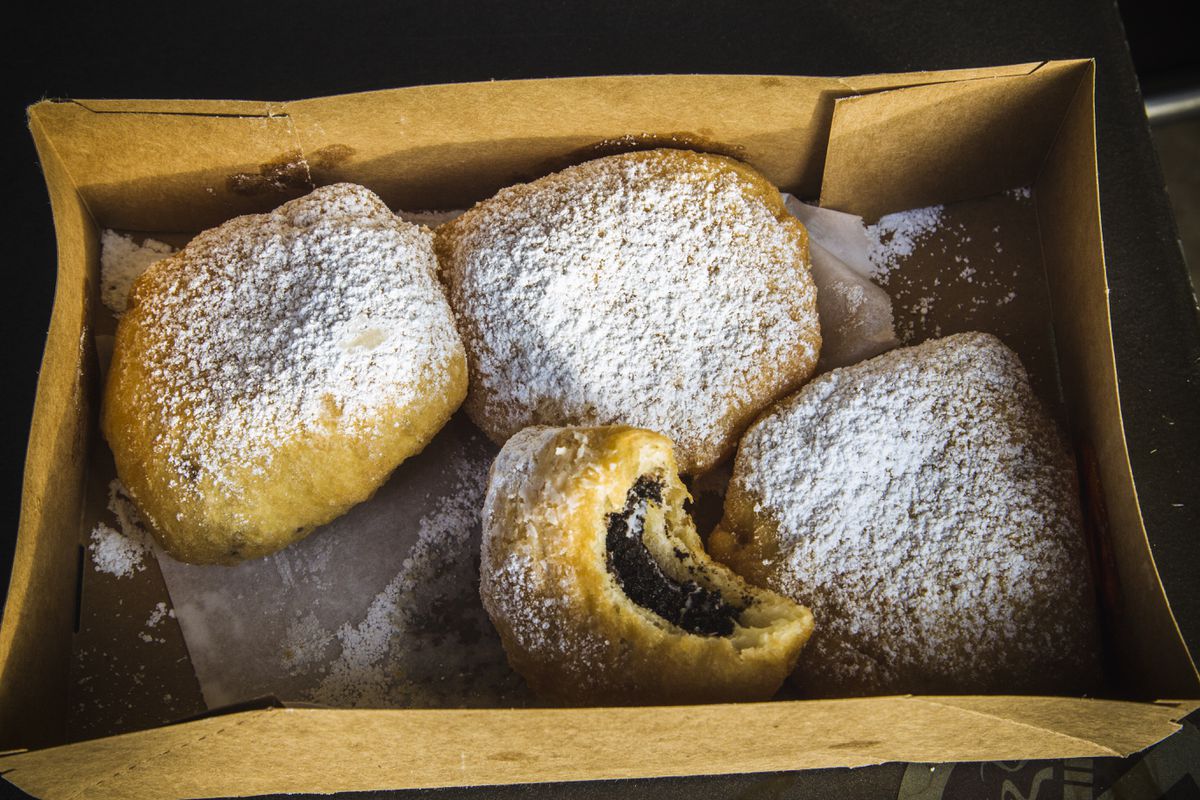 Almost every culture across the world eats some version of a stuffed dough. In Latin America, it’s the empanada, in South Africa it’s the poli, in India it’s the samosa. For the transcontinental Armenian “nation,” what you call the dish and what you put in the dough yet again depends on where you’re from.

Under the Soviet Union, the piroshki (meaning “small pie” in Russian), stuffed with potato or seasoned meat, became a popular, inexpensive street food in Armenia, a legacy that is still alive in the country today. For Western Armenian communities whose descendants came from the Ottoman Empire and settled across the Middle East, it’s the borek, made with flaky phyllo dough and stuffed with cheese, spinach, or meat. There’s also sou borek, a lasagna-like dish in which the dough is stuffed with cheese filling and glossed with butter. Nagorno-Karabakh, a mountainous de-facto country that became the focus of the Armenia-Azerbaijan war after the Soviet Union collapsed, is known for its version called jingalov hats made with up to 20 different local herbs and greens.

Hear more about these treats

The sweet, fried variety of piroshki is called ponchik. Though traditionally filled with custard, ponchik filled with a bevy of modern flavors, including Nutella and Oreo, can be found at L.A.’s Papillon International Bakery. As a result, the ponchik has become known as the “Armenian doughnut” in Los Angeles. 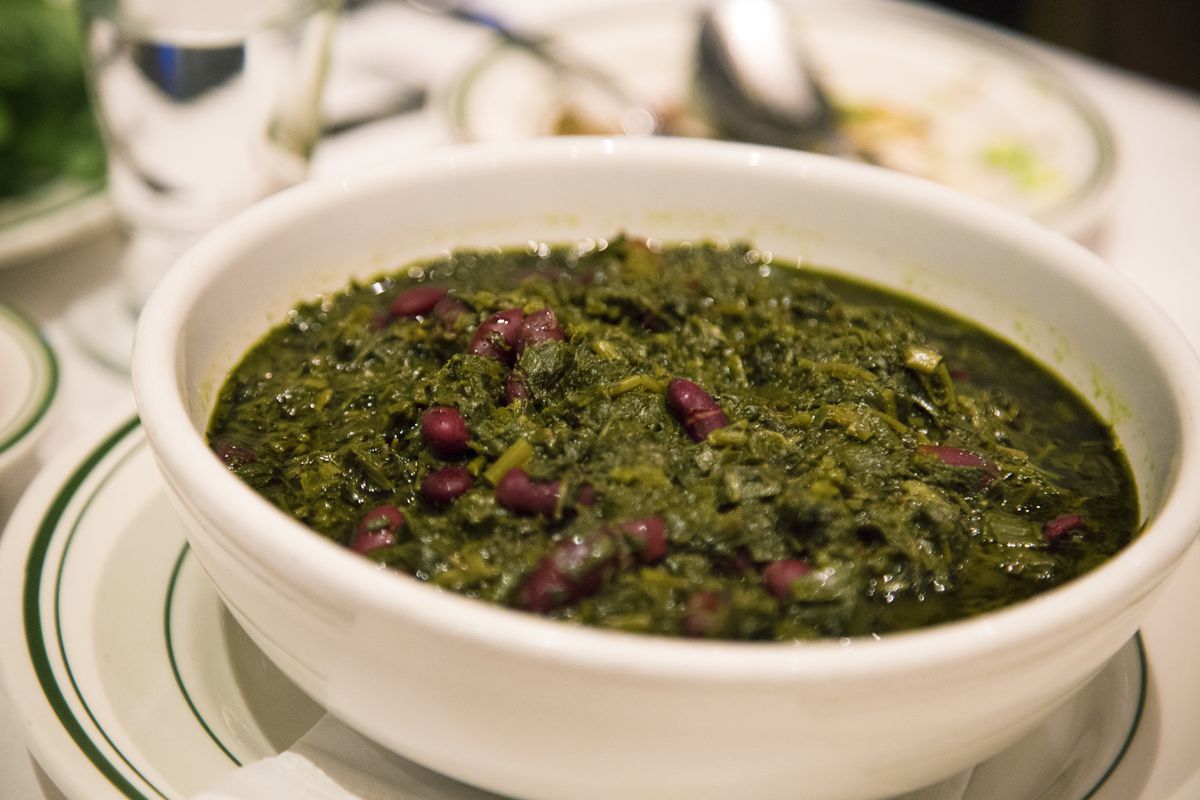 Armenian dining begins with appetizers spread out across every inch of the table. Abour, or soup, is a big part of that experience, and tends to combine many elements of the meals in one. For example, spas, a popular soup often considered a comfort food, uses yogurt and shelled wheat as its base. Lentils are also frequently eaten in preparations including the soup vospov abour, where they’re combined with garlic, olive oil, and herbs.

Try abour at this restaurant

In the Armenian highlands, where most families are involved in difficult agricultural work, khash, from the Armenian word khashel (meaning “to boil”), is a soup typically eaten in the winter. It features cow’s feet (cooked for hours until soft) simmered with salt and garlic, and is eaten with copious amounts of lavash, a flatbread. The soup is said to have medicinal properties and is served alongside hearty amounts of vodka. In Western Armenian households, manti, handmade boat-shaped dumplings filled with lamb, are served in chicken broth and eaten with a good helping of yogurt.

At the Persian-Armenian restaurant Raffi’s Place, for example, you can find a simple yet satisfying soup of chopped barley with parsley and cilantro in chicken broth. 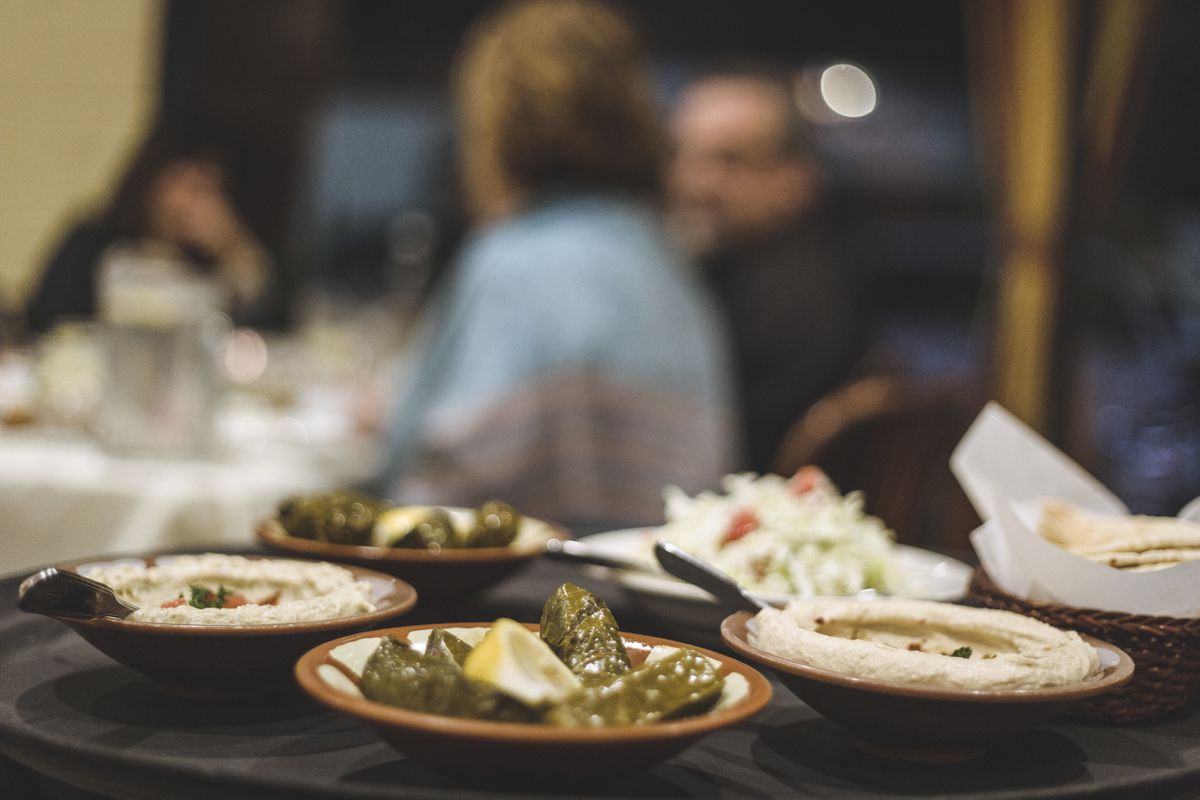 To make dolma, vegetables like squash, eggplant, tomato, or onion are stuffed with a mix that can include ground beef or lamb, onion, parsley rice, pepper, and occasionally pine nuts. Though the name of the dish is Turkish (dolma means “stuffed”), it is found across countries in the Middle East, Balkans and Caucasus.

Fruits like quinces or apples can also be included in the stuffing. The dolma’s cousin, sarma (meaning “wrapped” in Turkish) is usually made with a similar mixture, but wraps the filling with grape leaves instead of vegetables. Though the leaves can be bought canned, grape vines are almost always found in the gardens of Armenian households, so Armenians typically use fresh grape leaves or can them at home.

Where to find dolma in L.A.

Dolma, served as an appetizer or a main, is time-consuming to make, as each piece is stuffed by hand. The variety of spices and vegetables contribute to the richness of this dish. Regional variations are common: If your family is from Istanbul, you might stuff mussels. If your family is from Tehran, an Iranian spice mixture of cardamom, cinnamon, nutmeg, and other spices known as advieh might be used. Armenians also have a Lenten version of this dish, made with lentils and beans instead of meat and eaten during the 40 days of fasting in the Armenian Orthodox Church.

How Armenians from all over built a community in L.A.

From a falafel shop to a cured meat specialist to a Persian-Armenian mainstay.