Find Flavors of Bhutan, Tibet, and Nepal in Queens

Himalayan restaurants in Jackson Heights pull influences from Bhutan, Tibet, and Nepal — and often from more than just one of the countries. Each of these six restaurants plays an important role in that cultural narrative. 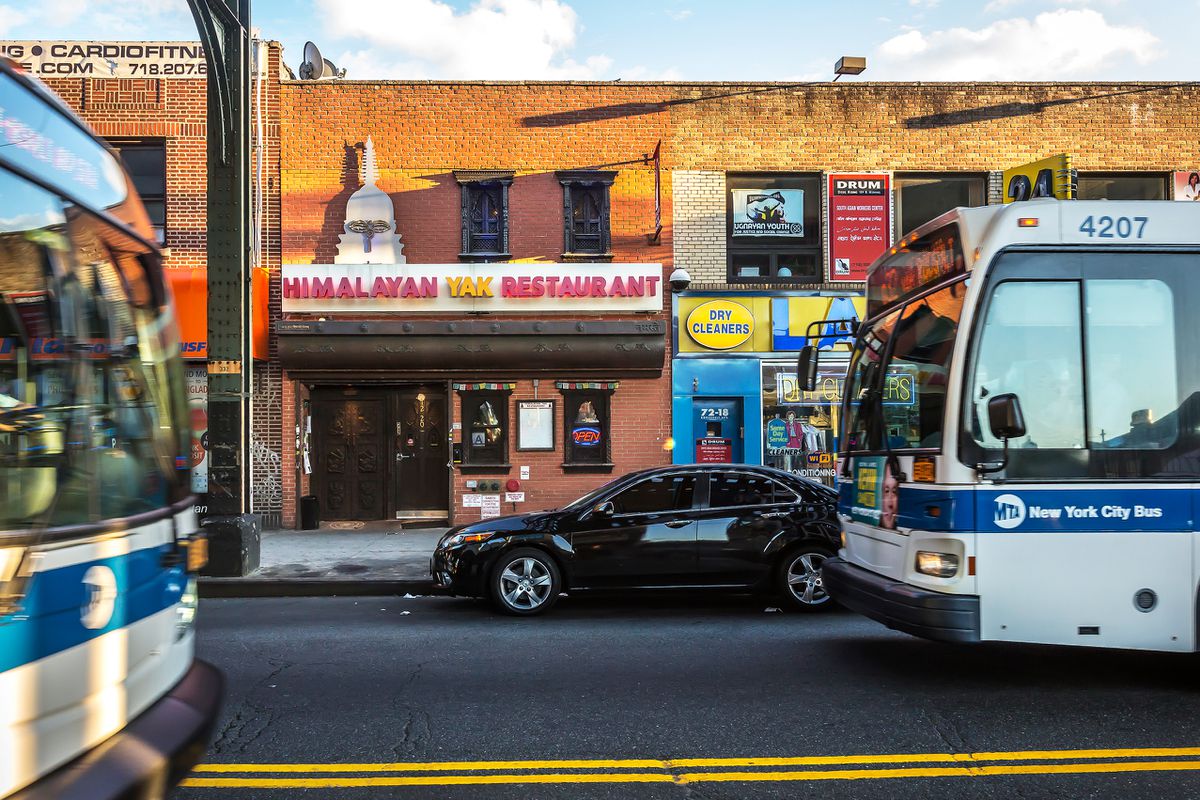 After taking over the oldest Himalayan restaurant in New York City, the owners not only changed the name from Tibetan Yak to Himalayan Yak, but they also expanded the menu to include more Nepali and Indian dishes to better serve the community. It still draws a big crowd, and the din of the dining room is often enough to drown out the rumbling 7 train overhead.

The menu has all of the Himalayan staples, and for those seeking out yak, they have a whole menu section devoted to it, from yak cheese pakoras to yak sausages and yak momos, served with a trio of sauces.

You wouldn’t expect to see french fries on the menu here, but the chips chilli (spicy fries with tomato paste, garlic, red onions, and bell peppers) is a result of the influences of the internationalization and steady stream of tourists in Kathmandu. Finish off your meal with some slightly salty Tibetan butter tea or yarsagumba tea, which contains herbs mixed with yarsagumba, or caterpillar fungus, often touted for its medicinal benefits (it’s also known as “Himalayan Viagra”). 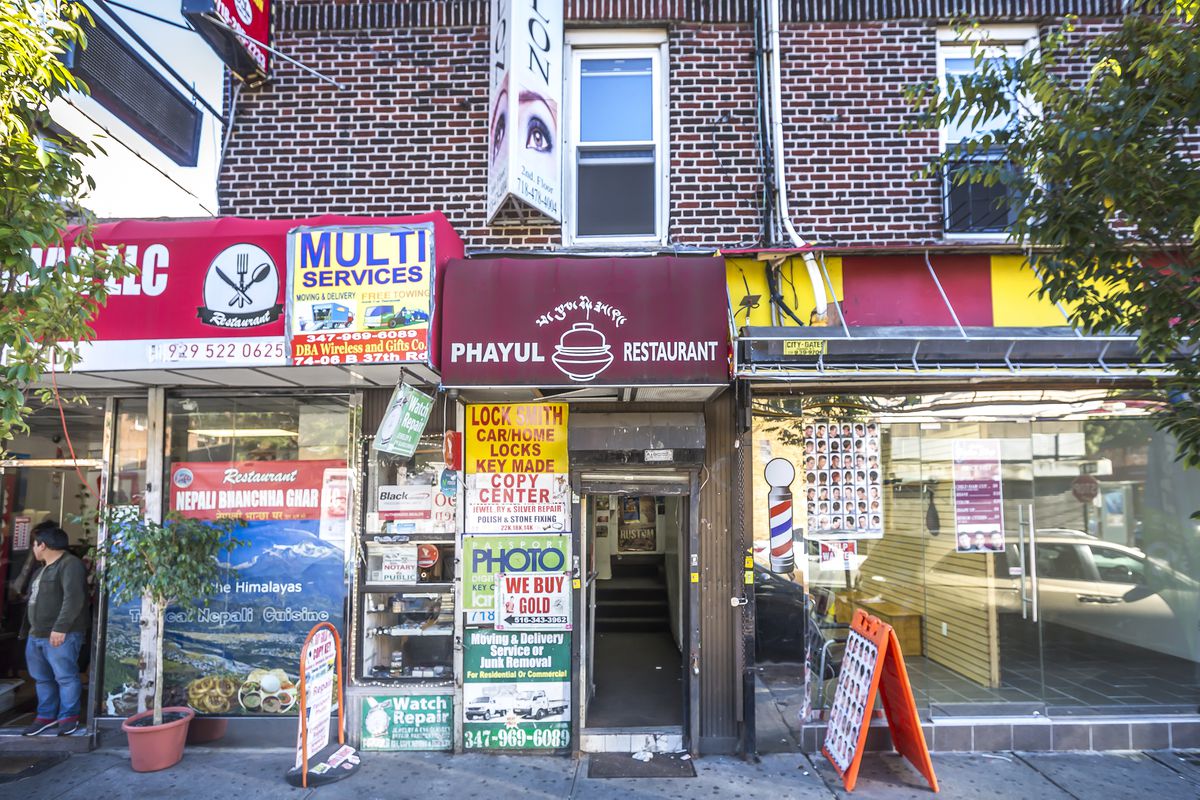 As with any neighborhood hidden gem, someone might traverse this block hundreds of times without ever coming across the restaurant. While you can see restaurant signage facing 74th Street, you’ll have to walk a little bit down 37th Road — a couple doors down, up the nondescript staircase past the beauty parlor and into Phayul (“fatherland”), a tiny space that manages to pack a lot of heat in its homey renditions of Tibetan favorites. If you can’t handle the heat or the wait, they’ve opened a bigger space a mile away on Northern Boulevard, with a Tibetan and a sushi menu — although Tibet is landlocked. A large number of Tibetan immigrants end up working in the service sector, many as restaurant workers in Japanese and Thai restaurants, and as taxi or uber drivers.

Sichuan peppercorn (known as emma) grows in the region of eastern Tibet, where the food is strongly influenced by Chinese, rather than Indian or Nepali, cuisine. The peppercorns are used liberally at Phayul. You’ll feel their characteristic tingle while enjoying gyuma (blood sausage), laphing (mung bean jelly strips in a cool peppercorn and soy broth), and tsak sha la kor (a milky bone broth with beef, daikon, and herbs). 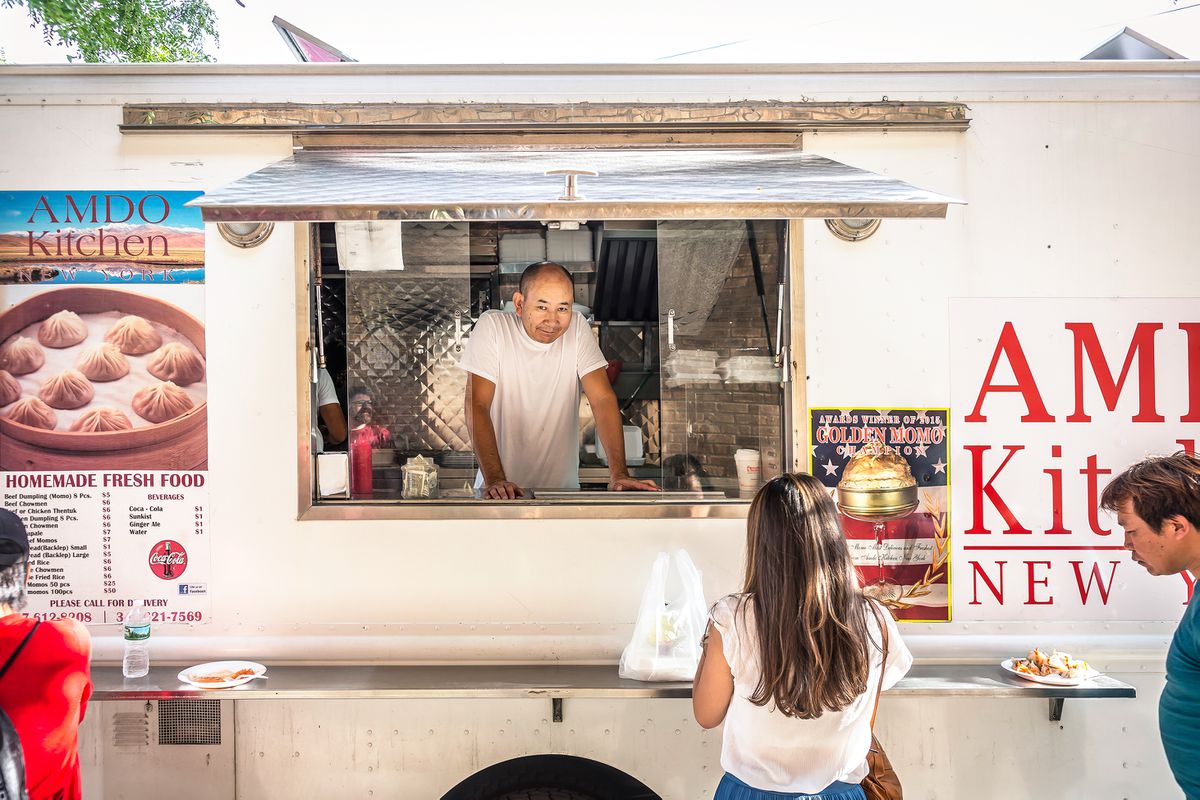 Amdo Kitchen is one of Jackson Height’s newest food trucks, but has quickly made a name for itself in the neighborhood; the beef momo won the 2015 Golden Momo award. Steady crowds flock to the truck for made-to-order, piping hot momos. Momos, wrapped with a thick dumpling skin, emerged as a way to make lean, tough meat like yak juicier. If you decide to eat in front of the truck, you’re rewarded with a side of pickled radish, a perfect complement to the subtle spicing of the momo, and one that makes the spicy sepen served on the side more bearable.

In the northeast region of Tibet, amdo balep (a round loaf of bread) is served frequently at breakfast and on special occasions like Losar (the Lunar New Year). It’s baked over crushed clay pots or hot sand covered in ashes. You won’t get quite the same lovely, dark brown crust when it’s cooked in an oven or stove, but Amdo Kitchen’s version still sells out regularly. The chow mein here is a popular dish with Tibetans; it’s extra garlicky and often served with sepen. 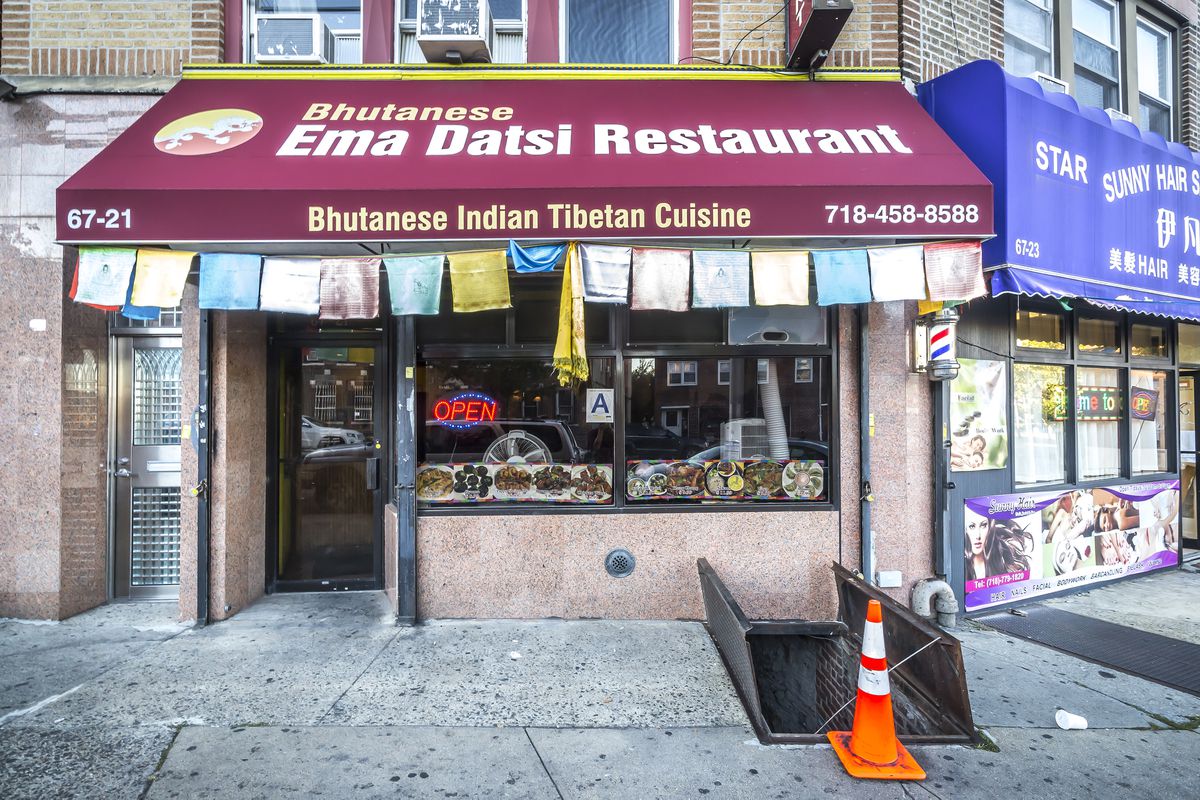 Given Bhutan’s proximity to India, China, Nepal, and Tibet, it’s not surprising to see sections of New York City’s first Bhutanese restaurant menu devoted to each region. The restaurant is the fulfillment of a dream for Lekay Drakpa, an ex-monk who also spent some time as a manager of a Subway franchise in Manhattan.

Chiles made their way to Bhutan via India in the 18th century; they now play such a prominent role in Bhutanese cuisine that they are viewed as a vegetable rather than a spice. Here the namesake dish, ema datsi, is prepared with fiery chile peppers, onions, and cheese. In place of yak cheese — hard to find in the U.S. — chefs here use American and a mild blue cheese (other restaurants might use feta), which results in a thick yellow sauce not unlike Cheez Whiz.

You can order several variations of this dish, including keyroa (potato) datsi, shamo (mushroom) datsi, and beans datsi with onion, garlic, and ginger. To help cut the spice, the bowls are served with a potato soup made with leftover whey and red rice, a staple of Bhutanese cuisine. Mercifully, the restaurant will accommodate your particular heat tolerance.

For the spice-averse, the puta makes an excellent choice. It’s a buckwheat noodle dish served with scallions, green chiles, butter, and an egg. The thali here are a simpler and meatier affair, served with a datsi or meat main dish and vegetable side. Consider trying the tripe (goep), another Bhutanese staple, too; it’s served with garlic, chile powder, and spices. 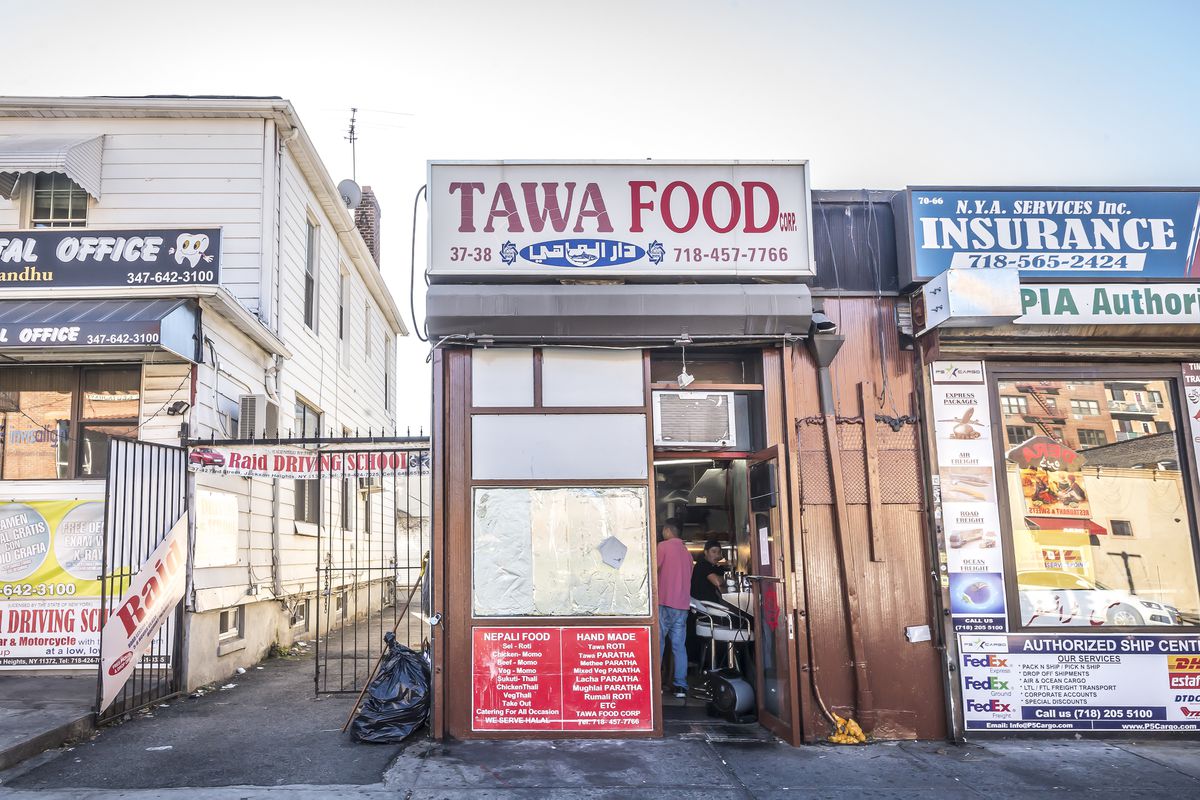 Dhaulagiri Kitchen was a longstanding neighborhood favorite before chef-owner Kamala Guachan relocated the restaurant to Manhattan. Her former employees have taken over and continue to serve Nepali cuisine in the tiny space shared with Tawa Food bakery.

Servers will encourage newcomers to order the thali, since the plate offers a sampling of the menu items — the silver platter holds pickles, greens, curry, and rice or dhido, a mash often made of buckwheat or cornmeal. The samay baji is presented in a bento box with uncooked beaten rice (in Nepal, this is typically made with puffed rice), crunchy bhatmas sandheko (spiced soybeans), black-eyed peas, achaar (pickles), choyla (marinated barbecued meat) and is a staple dish of any Newari festival.

The fried rice flour doughnut or sel roti is also made daily, available in trays next to the counter. Don’t forget the addictive sandheko waiwai, a packet of Nepali instant “wai-wai” noodles crushed with jalapenos, red onion, scallions, cilantro, and lime, and feel free to buy some paratha and roti from Tawa for your ride home, or for the next day. 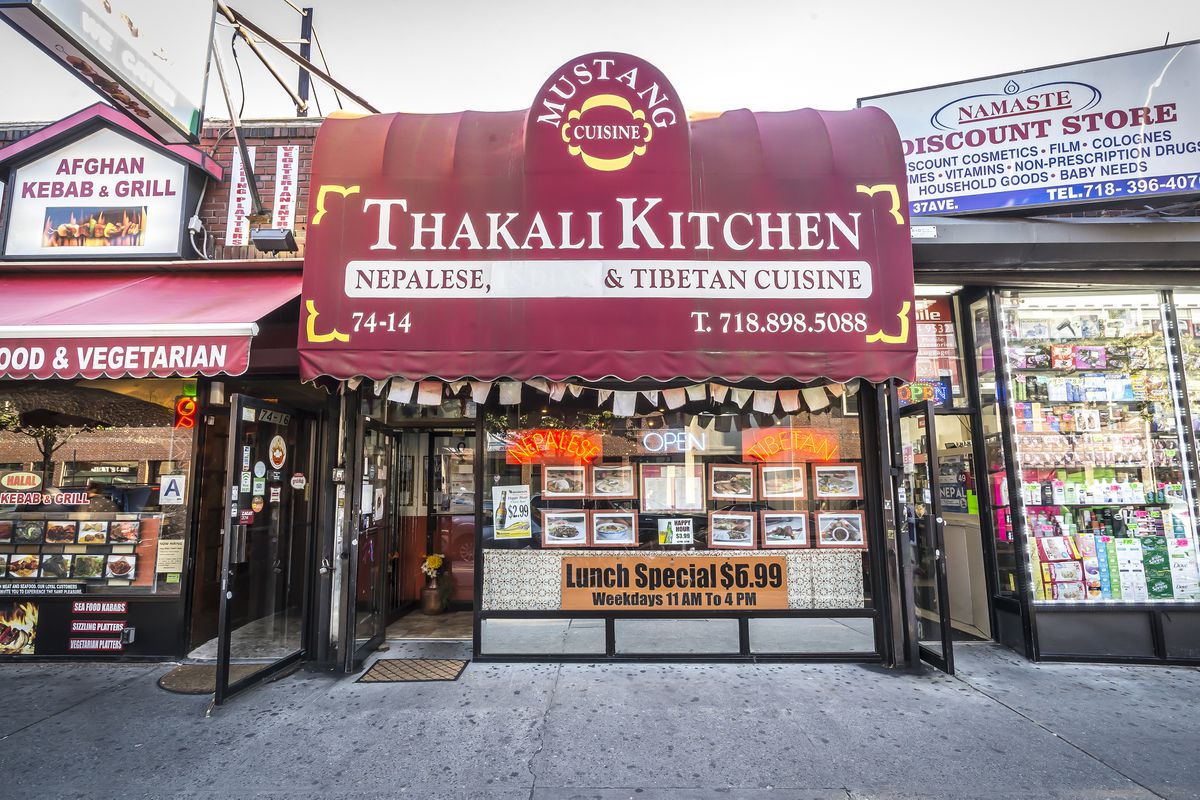 Mustang Thakali Kitchen is one of the fancier Himalayan restaurants in Jackson Heights, where it is not uncommon to run into other Nepali and Tibetan restaurant owners on their time off. Mustang (meaning “fertile plain”) is a region in north central Nepal that only recently opened to travelers in 1991, and only to those with a permit from the government.

Thakali people reside primarily in central Nepal, and many of them run inns and restaurants for travelers throughout the region. Meats abound in this region and at the restaurant, including pangra fry (gizzard); bhutuwa (“goat liver stomach intestine with a touch of spice”); sekuwa (meat marinated and grilled on skewers); and buffalo in preparations like buff chili and the jerky-like buff sukuti.

Buckwheat is a staple in Mustang, since high altitudes make it nearly impossible to grow rice. The restaurant has a number of dishes that feature buckwheat, from phapar ko roti (buckwheat roti) to phapar ko dhido, mashed buckwheat served on a thali plate with spicy yogurt, potatoes, chicken curry, and chutney. Ask for a side of ghee to enhance the dish. In colder months, order the buckwheat thenthuk, a popular Tibetan hand-pulled noodle soup.

How the flavors of Tibet, Nepal, and Bhutan came to Queens.

Momos, curries, sukuti — and much more.