There’s much more to Himalayan food than yak meat and butter tea. Below are some of the quintessential Nepali, Bhutanese, and Tibetan dishes you’ll find in Jackson Heights. They range from soothing to spicy, from vegetarian curries to meaty momos, and much more. 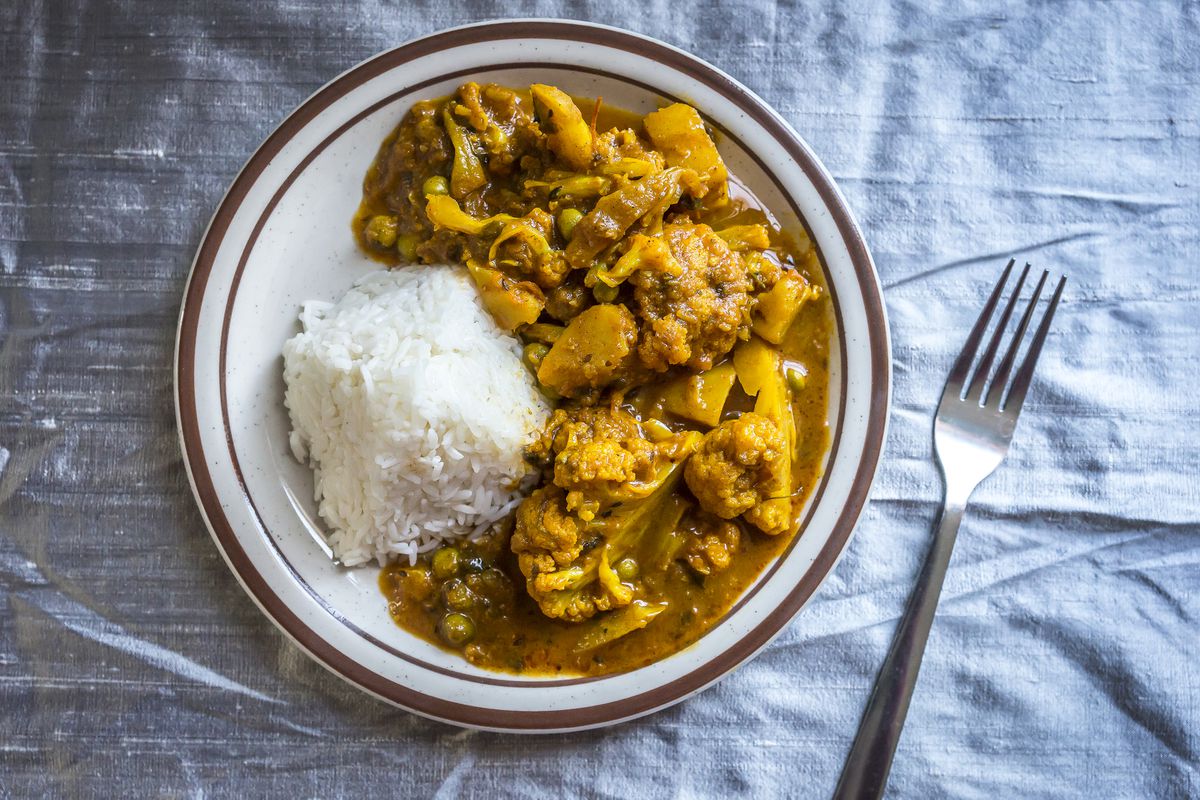 Nepali cuisine has always relied heavily on locally grown produce and grains due the lack of infrastructure and outside trade until only recently. Most households do not store fruits and vegetables, since they are bought fresh every day at vegetable markets. While asparagus is considered the king of vegetables in Nepal, cauliflower is also one of its most beloved, especially in north central Nepal. Similar to its Indian counterpart, aloo gobi, alu kauli ko tarkari (potato and cauliflower curry) is a staple dish in Nepal.

Find this dish at Himalayan Yak

In Nepal, curried vegetables are traditionally served with dhal and/or rice. While the preparation is simple, there are hundreds of variations, and the components are often cooked separately to ensure that the texture remains consistent. You might find a spartan version at Lali Guras, on 76th Street, or a more filling version nearby at Himalayan Yak. 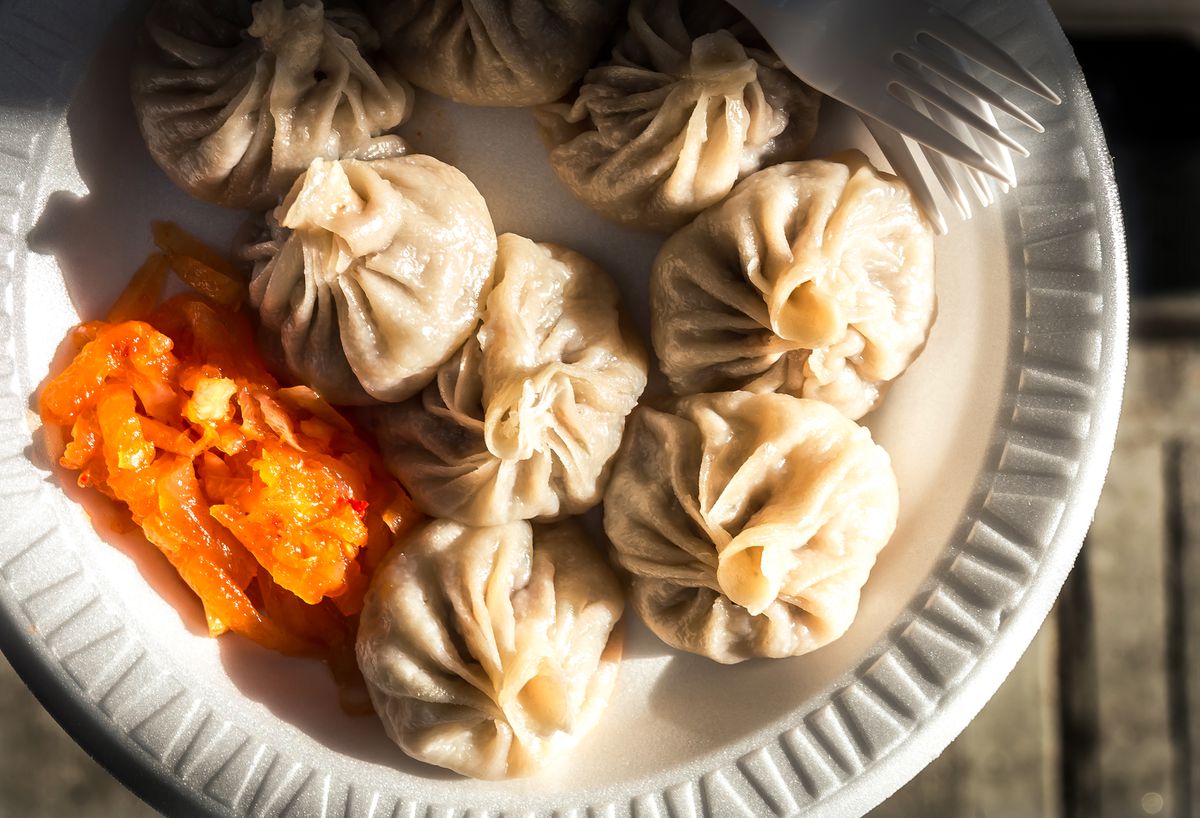 Momos, a simple but varied sort of dumpling, are a testament to the diversity of the Himalayas, with influences from Bhutan, Nepal, Tibet, and parts of India. Buff momo, made with water buffalo, is most common in Nepal, where beef is restricted. Though goat, lamb, beef, chicken, and yak are still the most widely found fillings, vegetarian momos have flourished in the diaspora. A potato mixture is sometimes blended with mozzarella or parmesan, but can also be found as a standalone filling in the Kathmandu Valley, or at the Potala Fresh Momo cart on Broadway and 37th Road. Vegetable momos are also popular throughout Nepal and India — as are momos filled with cheese (eastern Nepal) and paneer (India) — and are available at almost every restaurant that offers momos in Jackson Heights, like at Phayul and Lhasa Fast Food.

Find momos at this restaurant

Momos come steamed or fried, and often in the shape of purses (like xiao long bao) or crescents. The meat is often mixed with garlic, onion, and ginger, plus a few drops of oil. Momos are often accompanied by condiments like pickled radish or sepen, a Tibetan hot sauce, sometimes accented with Sichuan peppercorn or chile oil. Look out for a Nepali chutney of charred tomatoes mashed together with spices, or one with cilantro or sesame. Expect to wait a few minutes for the momos to cook, and a few more for them to cool before digging in. 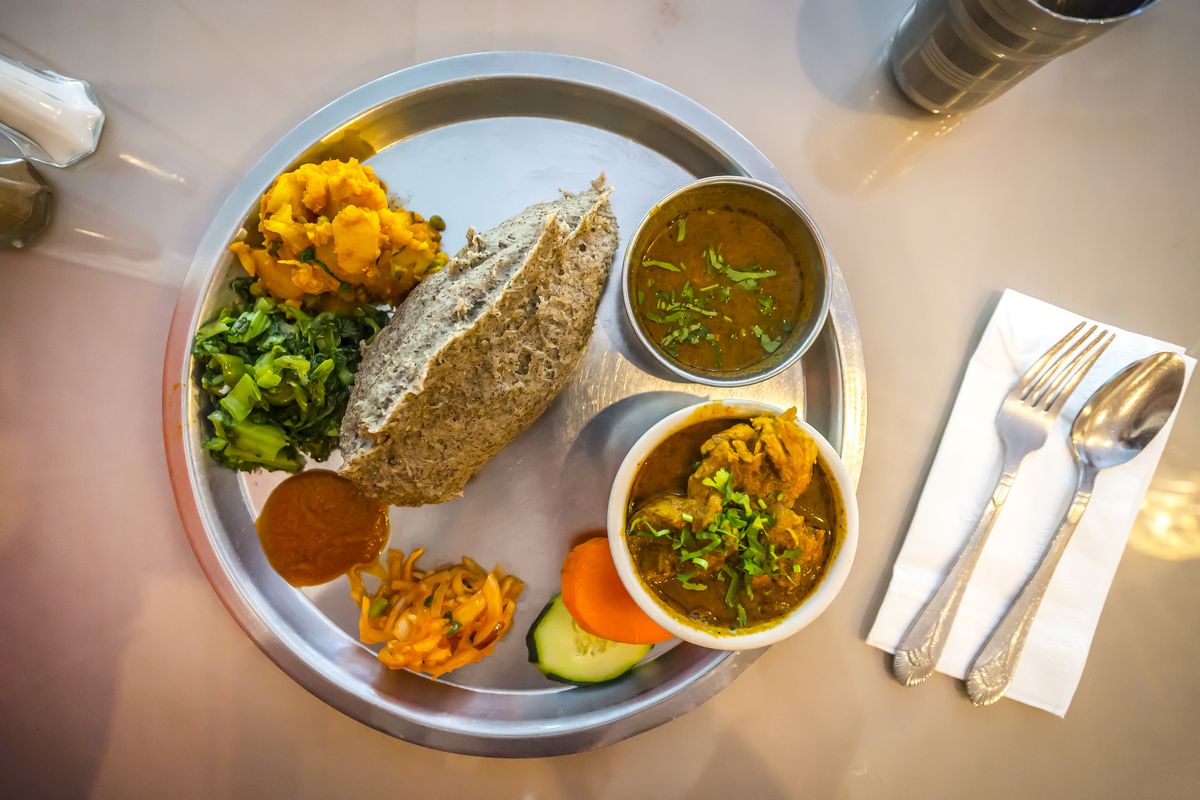 An increased access to products has not only changed Nepal’s way of life, but also its diet. Rice is quickly becoming the grain of choice but most prevalent in the middle hills and rural areas of Nepal, dhido (also called dhindo or yhosi) is seen as a nutritious, filling, and cheaper alternative to rice.

Dhido, a thick porridge, is most often made with a variety of flours like corn meal (makai ko dhido), buckwheat flour (phapar ko dhido), or millet, mixed with salt and water, then cooked. Traditionally it’s made in an iron pan (falaam ko taapke) and served as part of a thali, on a round plate sometimes surrounded by various pickles, dhal, curry, gundruk (fermented leafy green vegetables) or mustard greens (rayo ko saag), and buttermilk or yogurt to enhance the dhido’s neutral flavor.

Hear more about this dish

It’s also a popular dish to eat during fasts, since the lack of spices and oil makes it easy to digest. Since the mash begins to harden when it cools down, it’s meant to be eaten immediately after preparation, sometimes with ghee. Find it at Mustang Thakali Kitchen or Himalayan Yak and consider pairing with chaang, a Nepali/Tibetan rice beer. 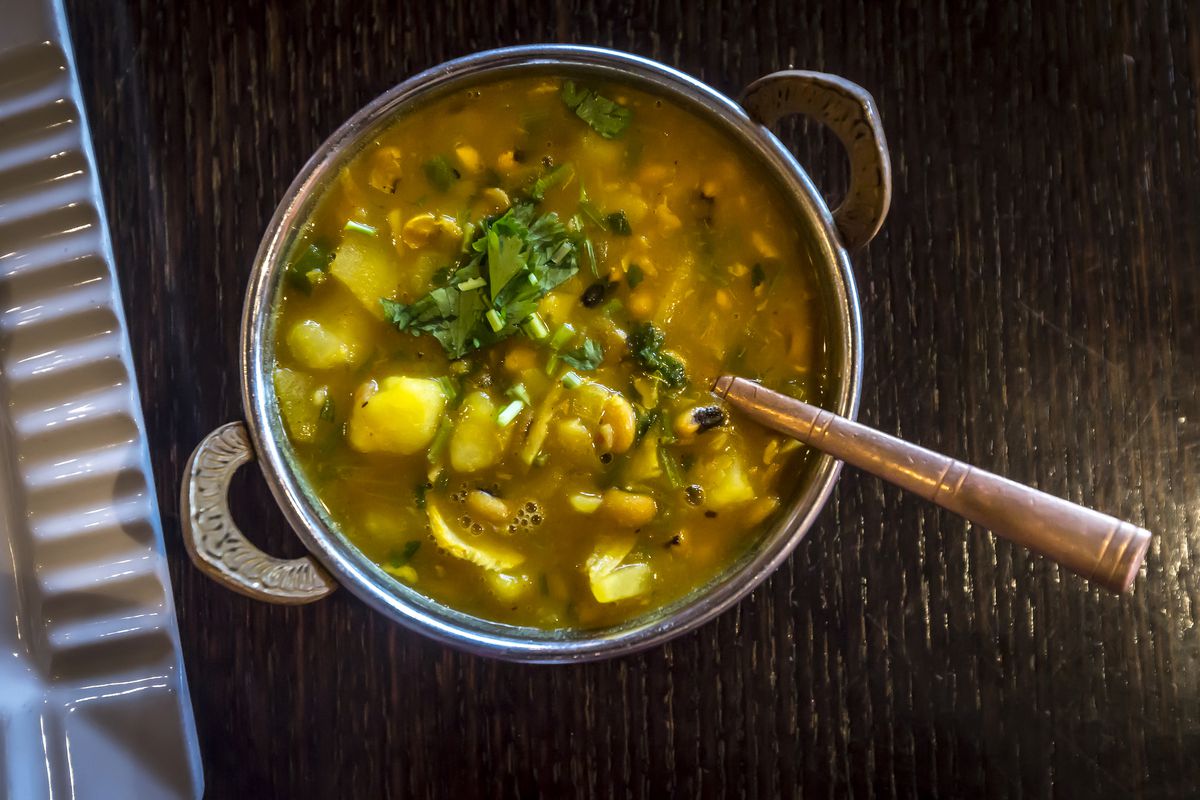 Bamboo shoots, or tama, grow primarily in the southern Himalayas, and are mild and versatile, which has made them a household staple throughout Nepal. Aloo tama bodi is a Nepali curry dish known for its slightly sour taste, as the tama is often fermented in the sun with mustard seeds, turmeric, and mustard oil. Cooked with potatoes — translated as either aloo or alu — plus black-eyed peas, tomatoes (which helps give it its color), bell pepper, and chiles, the dish is frequently served with rice, naan, and salad.

Due to its pungency, cooks often open their windows and vents before making this dish, which smells as sour as it tastes. Bamboo shoots — whether fresh, canned, bottled, or packed in brine — can be found at your local Asian market, and any type can be used for this dish; as with many Nepali foods, you can find variations from household to household (sometimes buff is added, or spices). At Himalayan Yak and Mustang Thakali Kitchen, servers might warn new visitors that aloo tama bodi is an acquired taste. 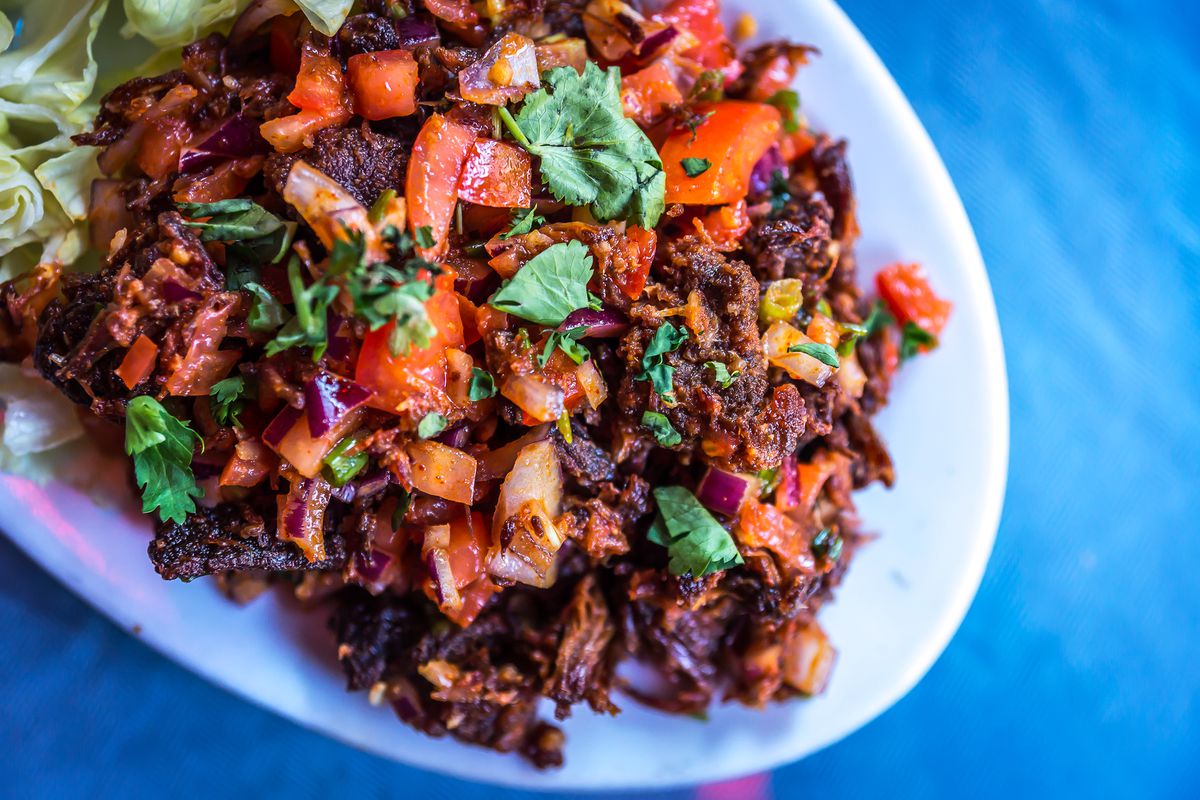 Sukuti is a dried meat, often marinated with spices (sukuti sandheko) over fire and charcoal or in the sun, sometimes over a fireplace. Sandheko is the term to describe a mixture of spices, most often with ginger, garlic, red onions, cumin, coriander, and chiles. It is usually served as an appetizer or snack, like beef jerky, or added into noodle dishes like chow mein. Sometimes, raw shelled green peas or peanuts are mixed in for a nice crunch.

Since sukuti can be prepared long ahead of time, it is popular to eat year-round and most often served with a spice marinade and pickle, often as a starter in restaurants and hotels. Near the Trishuli River, you’ll find maachaa ko sukuti (dried fish). Look out for buff sukuti at Mustang Thakali Kitchen, and sukuti sandheko at almost every Himalayan restaurant. 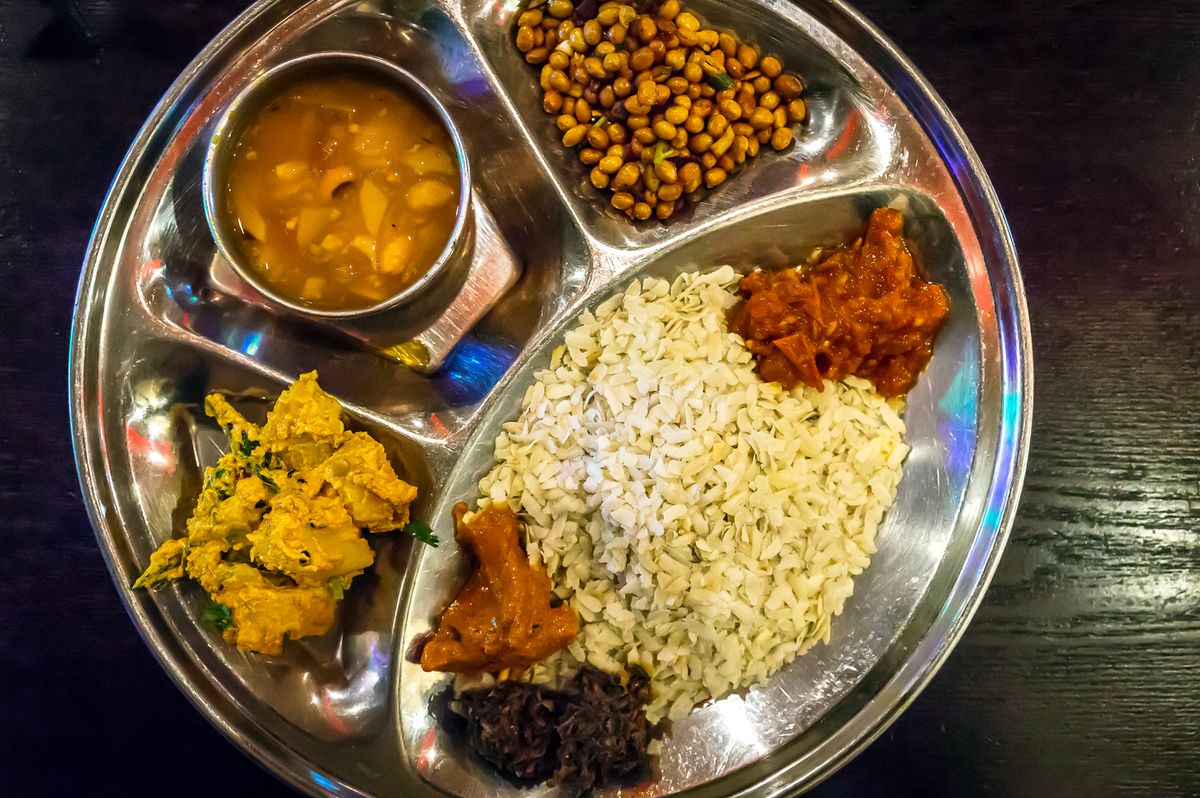 Mostly residing in the Kathmandu region, the Newar people are active in agriculture and trade, making them one of the wealthier and more influential groups in Nepal. Banquet dishes comprise a wide range of food and have much cultural significance; in fact the three main kinds of Newari meals are the daily meal (ja), snack (baji), and feast (bhoye). Samay baji makes an appearance at every festival and religious activity, and is presented as an offering to the gods, representing the Pancha Tattva, the five aspects of God.

In Nepal it’s commonly served with puffed rice, but in the U.S., beaten or flattened rice is used instead, eaten with choyla (barbecued and marinated meat, often served cold), bodi ka achar (beans with spices), aloo achar (pickled potatoes), saag, and palu (sliced ginger), washed down with thwon or aila, Newari grain alcohol. In Jackson Heights, meat dishes, as well as other foods reserved for special occasions like samay baji and sel roti (a fried rice doughnut), are staples of menus and are ordered regularly, though instead of water buffalo you might see goat, lamb, or chicken.

How the flavors of Tibet, Nepal, and Bhutan came to Queens.