Where to Eat Ethiopian Food in D.C., Silver Spring, and Northern Virginia

These six restaurants and cafes highlight the culinary traditions and signature dishes of the Ethiopian community. Look for coffee ceremonies, markets carrying imported staples, and menus offering everything from breakfast to dinner, showcasing the breadth of Ethiopian cuisine available in the nation’s capital. 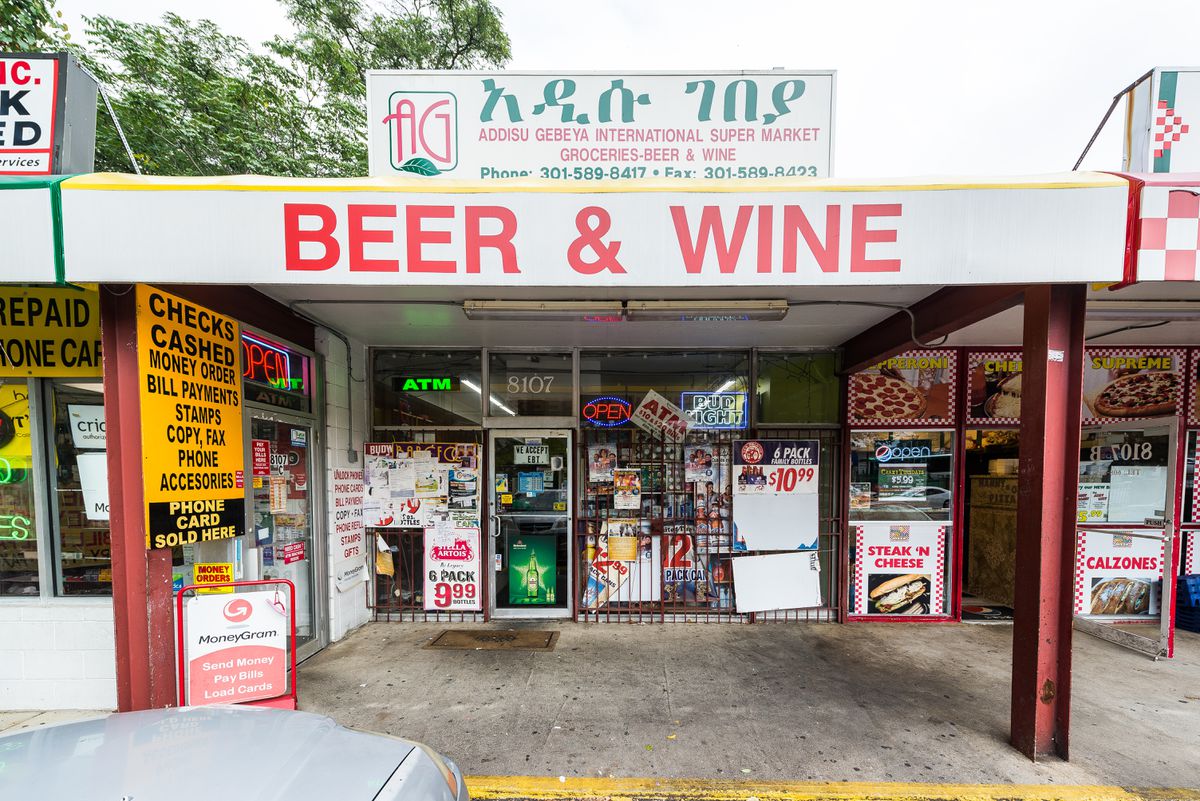 Rahel Mekuria and her husband, Daniel Teferra, are the owners of Addisu Gebeya — which means “new market” in Amharic, the official language of Ethiopia. New it is not: Addisu is the oldest Ethiopian market still in existence in the D.C. metropolitan area. It first opened in 1993 in Adams Morgan, but like many businesses, eventually relocated to Maryland where rent is cheaper and much of the Ethiopian community now resides. In 2012, the couple set up shop right beside a 7-Eleven on Silver Spring’s Fenton Street.

Visitors can easily spot the usual suspects: berbere spice mix in plastic containers, as well mitmita, a hotter blend. More obscure staples, like bula and senafitch, can be found as well. Bula is a flour made from enset, a banana tree that doesn’t bear fruit. It’s used to make genfo, a porridge commonly eaten by the Gurage people, an ethnic minority from the southwest of Ethiopia. Senafitch, Ethiopia’s answer to mustard seed, makes a nice complement to raw meat, or tire siga.

Hear more about this market

Addisu Gebeya also sells fresh meat, and in the back of the market, visitors can usually catch a glimpse of the butchers’ artful carving and grinding. Every day, the market receives a delivery of imported injera made of 100% teff, a tiny gluten-free Ethiopian grain, as well as fresh injera from bakeries across Washington D.C., which usually mix teff with maize or barley — due to differences in altitude, water, or pH, teff injera is hard to make outside of Ethiopia.

Look for a lesser-known Ethiopian bread, ambasha, a disc of leavened bread often smeared with niter qibe, spiced clarified butter. The ingredients for making niter qibe can be found on the shelves: koseret (a strain of verbena), korima (cardamom), and beso bela (a type of basil), to name a few. For those seeking a snack rather than cooking supplies, the market sells bags of kolo, an addictive ready-to-eat blend of roasted barley and chickpeas. 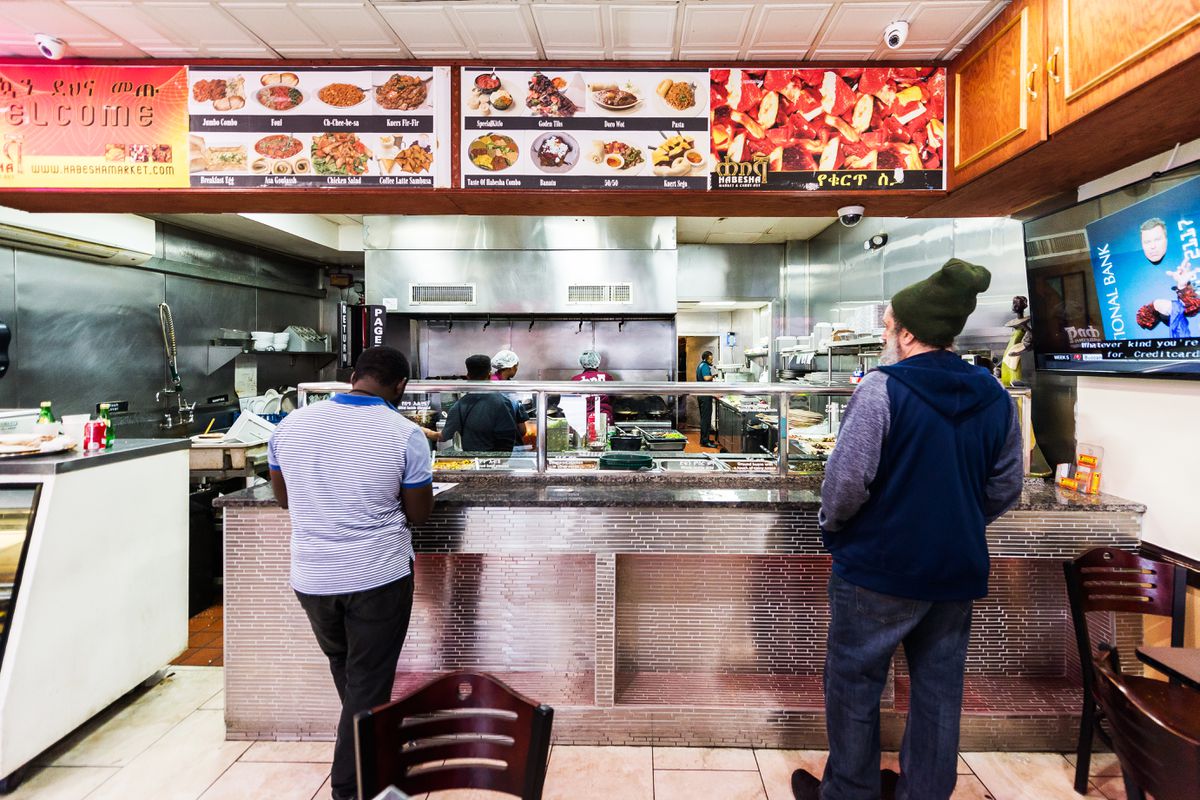 Habesha Market and Carry Out

Like its older neighbor Dukem Ethiopian Restaurant, Habesha first opened as a market and started serving food in 2005. Habesha means “Abyssinian” in Amharic, and the word usually refers to Ethiopians from the north, as well as to Eritreans. A stone’s throw from the original Ben’s Chili Bowl, a D.C. icon, and the now-defunct late night favorite, Bohemian Caverns, Habesha is part of a storied neighborhood. A few years ago, Ethiopian community members campaigned unsuccessfully to rename Habesha’s block (9th Street between U and T streets) Little Ethiopia. Members of the African American community contested that renaming the block would represent an erasure of the rich African American history of the area, which at one point was known as “Black Broadway” because of its Black-owned music venues and theaters.

In addition to popular dishes like doro wat, Habesha offers a diverse range of lesser-known, hearty Ethiopian breakfast foods. A bowl of cracked wheat may not sound alluring, but Habesha’s savory kinche, cooked with a generous dose of niter qibe, is simultaneously nourishing and indulgent. The satisfying combination of carbs and fat takes center stage with chechebsa (or kita fir-fir), a mixture of kita (spiced flatbread), niter qibe, and mitmita. Their special ful is equally hearty, with mashed fava beans, tomatoes, jalapeño, spicy awaze sauce (a mix of spices, lime juice, tej, ginger, and more), and slices of hardboiled egg, topped off with a dollop of yogurt. 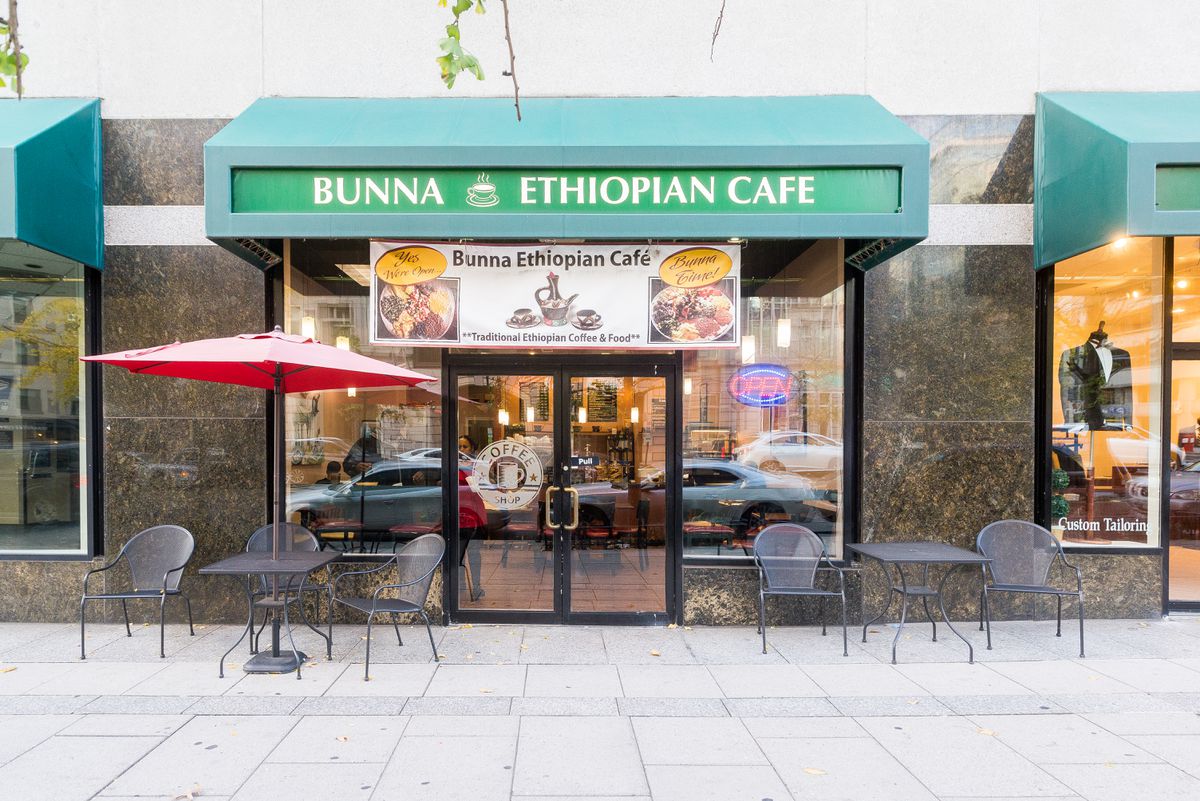 Bunna Cafe is in downtown D.C., far from the bustle of U Street. For Ethiopians, the name of this cafe leaves little to the imagination — in Amharic, bunna means coffee, and many call Ethiopia the birthplace of coffee. Indeed, Ethiopian coffee culture dates back centuries and plays a central role in family life and social gatherings. The traditional coffee ceremony is sacred; to be invited is the highest compliment for a guest.

In the U.S., efficiency is key to coffee culture, but in Ethiopia, a ceremony can last two to three hours. The female members of the family don traditional white dresses and begin by washing and roasting pale green coffee beans over coals — or over a portable butane stove, as is often the case outside of Ethiopia — in front of guests. The coffee is then ground by hand and brewed in a jebena, a clay pot with a long slender neck. The brew is poured into small, handleless ceramic or glass cups and consumed, often with a side of popcorn or kolo, a snack of roasted chickpeas and barley, and always over conversation. Frankincense, usually reserved for religious ceremonies, is also burned.

At Bunna Cafe, you can call ahead and reserve a full Ethiopian coffee ceremony for a group of six or more. For solo eaters, the cafe offers a miniature version of a traditional ceremony; a small tray is brought out bearing a miniature jebena (with coffee brewed from Yirgacheffe, Sidamo, or Harrar beans, named for the regions of Ethiopia where they are grown), smoldering frankincense, and popcorn. Ask for “Ethiopian coffee with the ceremony,” and stick around until the embers of the frankincense die down. 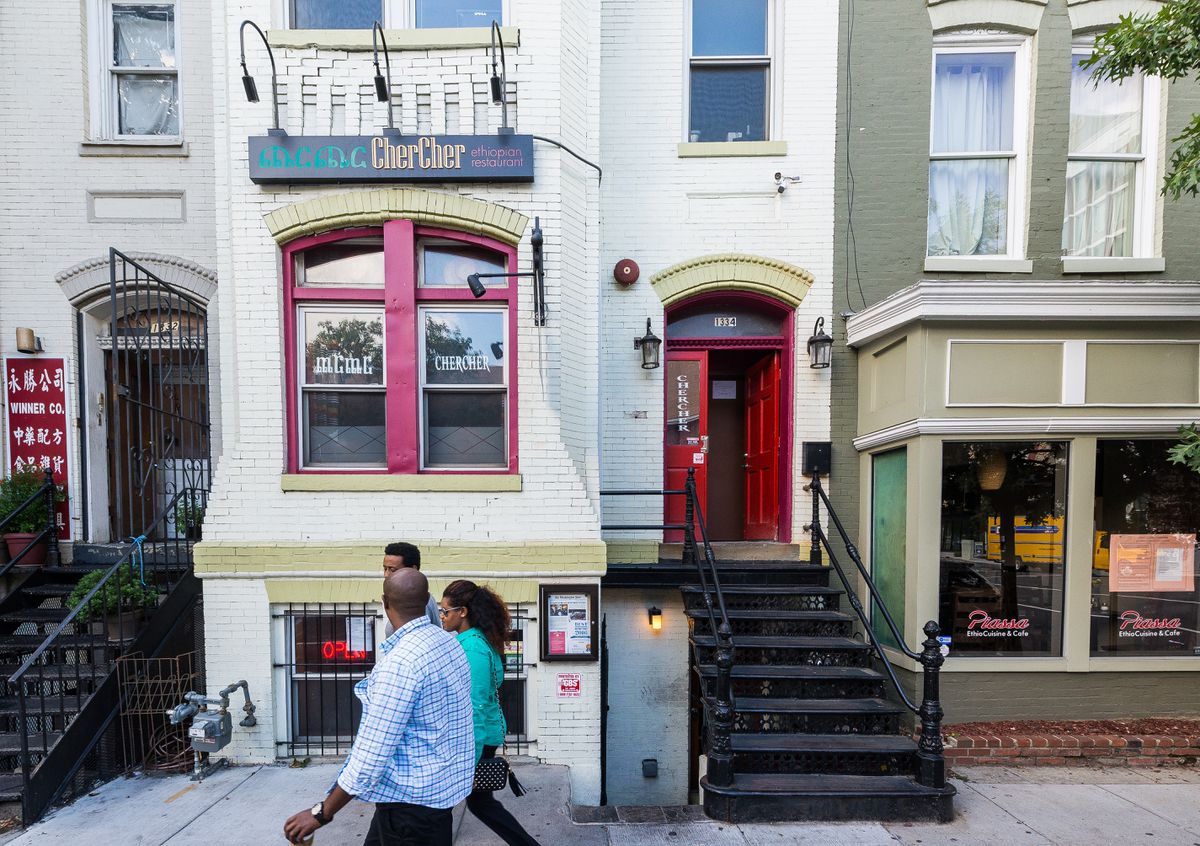 Most Ethiopian restaurants don’t offer a specific regional cuisine — in the D.C. area, you would be hard-pressed to find an Ethiopian restaurant specializing in the food of the Oromo or Amhara people. But Chercher owner Alemayehu “Alex” Abebe is proud to remind customers of the agricultural wealth of his home region. He hails from a province called Chercher in the south highland area of West Hararaghe in the Oromia region of Ethiopia, and named his restaurant accordingly.

Listen to an interview with Chef Alex

Chercher, one of the newer Ethiopian additions, has managed to snag a spot in a rowhouse in the increasingly pricey Shaw neighborhood. The restaurant emphasizes the quality of the meat served: Though it also offers the typical vegetable dishes offered at most Ethiopian places in D.C., Chercher highlights its meat-centric fare, including Gurage dishes such as dullet (lamb tripe) and tire siga, a dish in which the eater traditionally slices a piece of raw beef from a larger slab tableside. At the restaurant, wash it all down with a glass of tej or one of many Ethiopian beers. 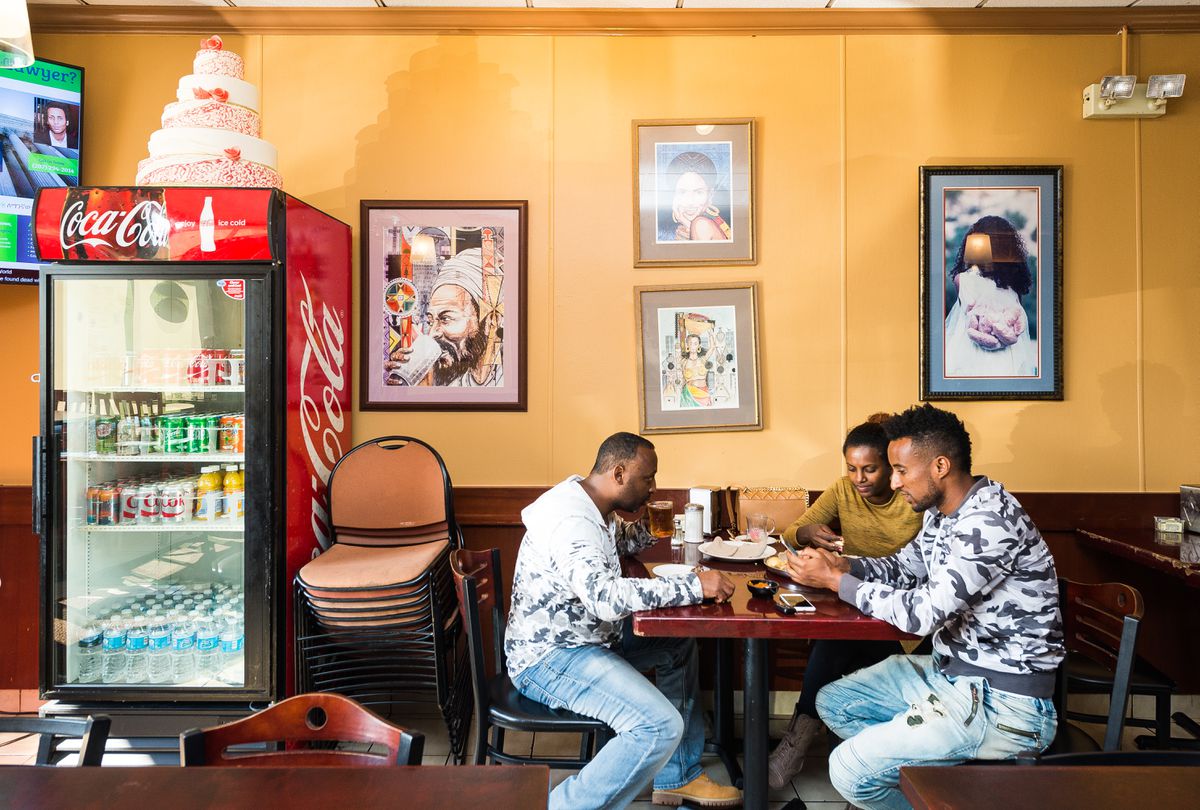 At Dama Cafe, pastry chef Almaz Dama deftly combines her nutrition studies with her baking prowess. Like many Ethiopian transplants in the first wave of migration in the mid-twentieth century, Almaz and her sister Hailu were students at Howard University during the 1974 coup, stranded far from their hometown of Debre Zeit. Dama is divided into a bakery section and a restaurant section, each with a distinct menu and ambiance. The restaurant features traditional cuisine and updated offerings like vegan doro wat or vegan dullet. Dessert is not revered in Ethiopian cuisine, but at the bakery, Almaz prepares the pastries for which she’s renowned, including 11 cake flavors and six kinds of vegan cake, so Orthodox Christians can still get a sugar fix at Dama’s during the fasting periods that require abstinence from animal products.

Traces of Ethiopia’s brush with Italian occupation from 1936 to 1941 can be seen in the Italian desserts like bombolino and tiramisu, as well as the coffee offerings. Hailu is well-known for her barista skills, and is in charge of crafting macchiatos, cappuccinos, and espressos. Make sure you try Dama’s vegan bombolino, or the cake made with teff flour, to experience the sweeter side of the tiny grain. 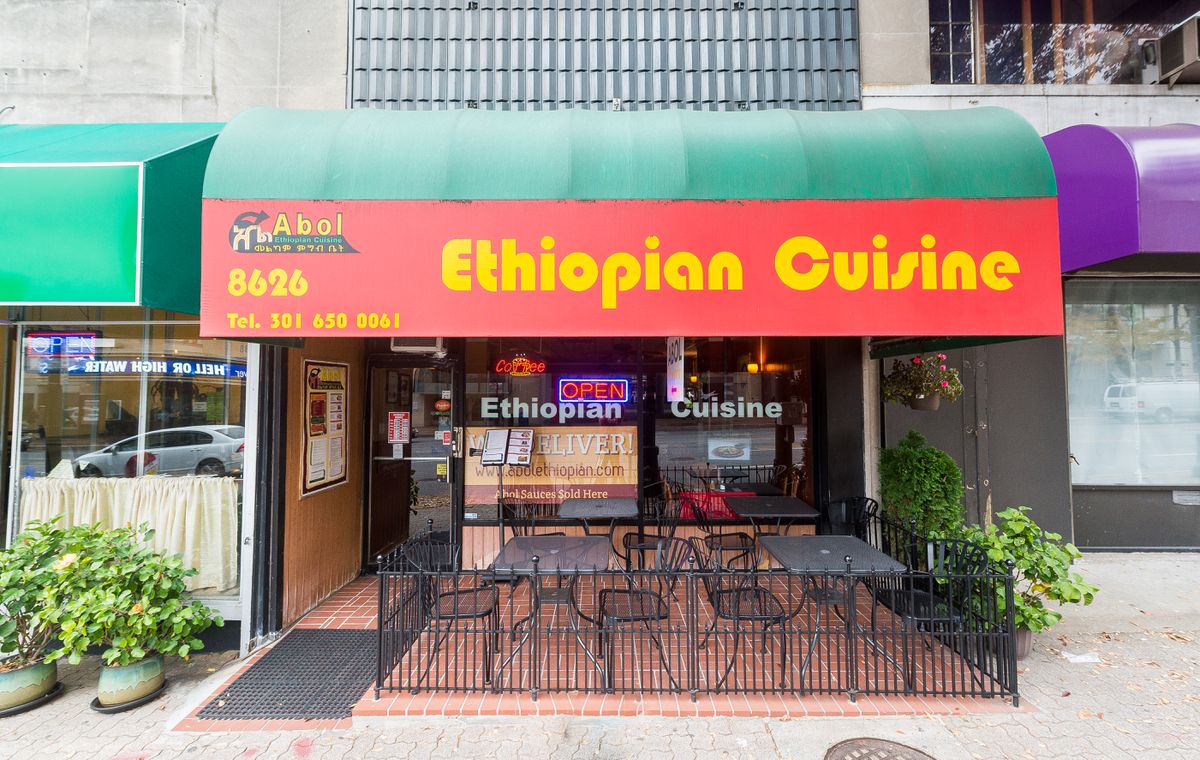 In Montgomery County, Maryland, the number of residents with Ethiopian ancestry tripled between 2000 and 2015. This dramatic shift of the diaspora’s epicenter, from Shaw and Adams Morgan to points in Maryland and Virginia outside the city limits can be seen in the number of Ethiopian restaurants in Silver Spring. Abol Ethiopian Cuisine opened its doors in 2007, and chef/owner Tiruzer “T” Mamo has been at the helm since 2013. The restaurant takes its name from an Amharic word meaning “original” that also refers to the first round of coffee in a traditional ceremony. (The word “abol” comes from the Arabic awwal, meaning “first.”)

Listen to an interview with Chef Mamo

Not many chefs at Ethiopian restaurants in the diaspora have become well-known in their own right, but Mamo is one of the more visible chefs in D.C. She grew up in the restaurant industry and completed her culinary studies at the Art Institute of Washington. Chef Mamo’s involvement in the community is a reflection of how tight-knit it is — she sponsored jerseys for the girls’ soccer team at the annual Ethiopian Sports Federation in North America (ESFNA) Tournament, an event that gathered over 10,000 people in 2013. Abol stocks kocho, the tangy, fermented enset bread that’s often eaten with kitfo, but you won’t find it written on the menu. Order it by name alongside the shenbra asa we’t: Mamo’s own variation on traditional shimbra asa, a vegan fasting dish made of chickpea dumplings cut into the shape of fish (asa).

A culinary history of Ethiopians in D.C.