There are so many different regional dishes to try in Chinatown, from comforting Cantonese dim sum to lighter, sweet-and-sour Fuzhounese fare, and even Chinese American staples like chop suey. It would take ages to sample it all, but these six iconic dishes are a good place to start. 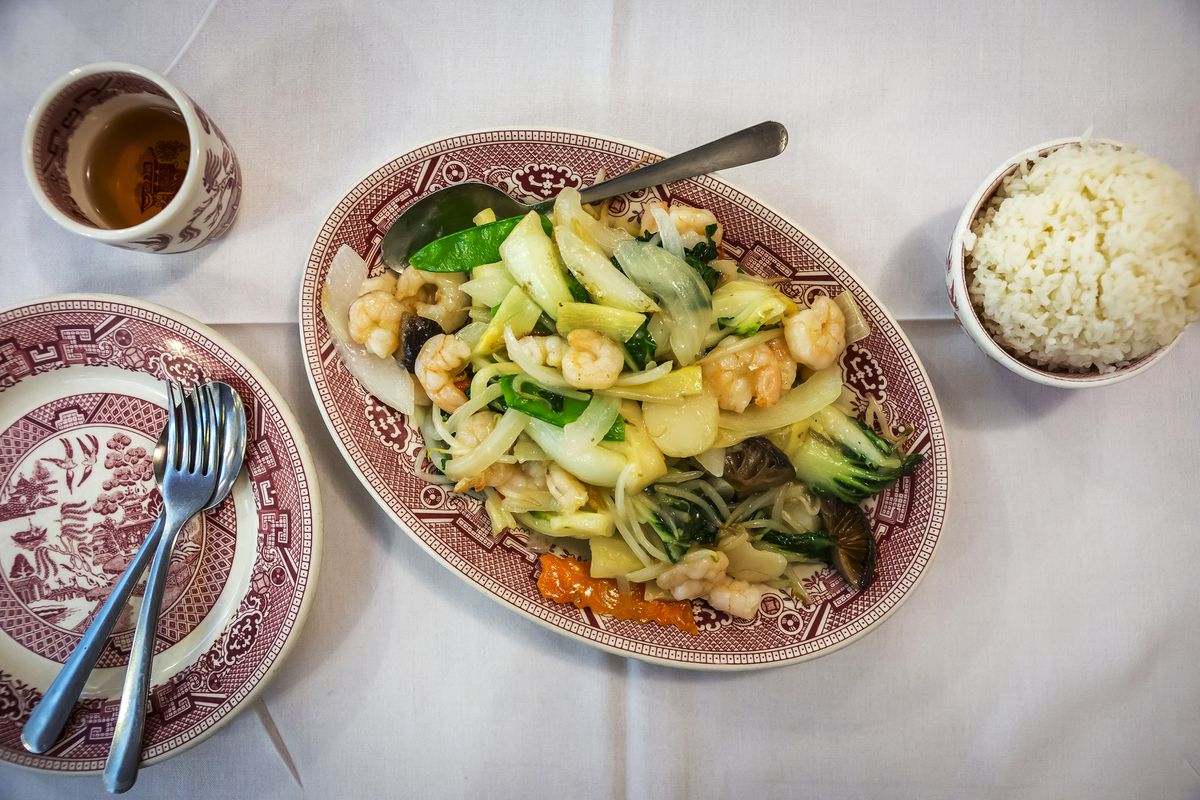 Chop suey — loosely translated as “odds and ends” — is more accurately described as a style of cooking than as an actual dish; the improvised stir-fries of organ meats, vegetables, and mushrooms were popular with the Taishanese who were among New York’s earliest Chinese immigrants. It’s seldom found on Chinatown menus today, but restaurants like Wo Hop will, upon request, prepare the dish easily recognized by over a century of New Yorkers as emblematic of Chinese food itself.

Learn about this classic

As the chop suey craze spread, a new generation of Chinese restaurants tried to make the dish more approachable to conservative palates, replacing gizzard and heart with more common meats and boiling the rest down to a gelatinous vegetable gravy. Though the result is a pale reproduction, it is a singular preparation — one of New York’s first fusion cuisines. —David Yee 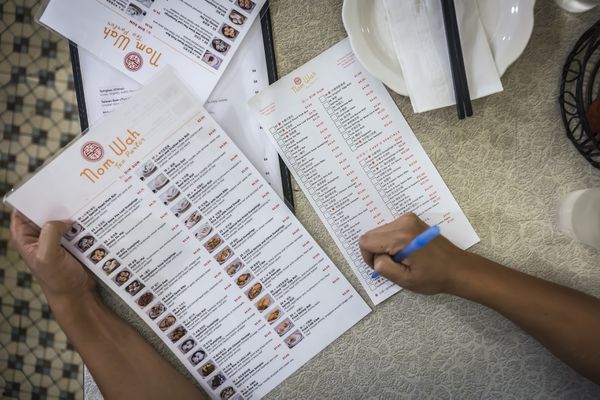 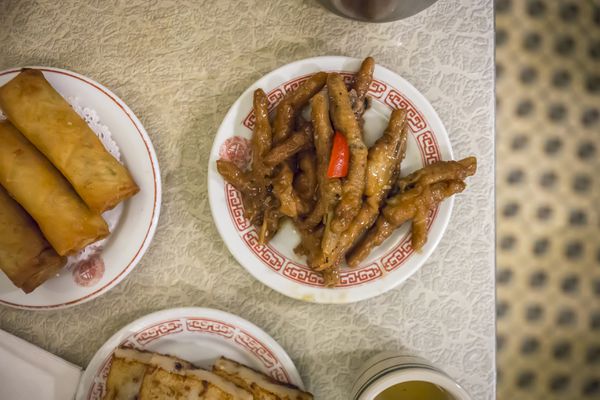 Originating centuries ago as a series of small snacks to accompany tea, what we know today as dim sum is Cantonese. At one point, people thought eating while drinking tea would make them overweight, but eventually, the cleansing properties of tea became known and teahouses started adding the dishes that are now called dim sum.

Each dish arrives with three to four bite-sized items, intended to be shared with the table, and many of them are served in the stackable round bamboo baskets that they were steamed in. The most ubiquitous dim sum items include pork and shrimp dumplings, shumai, and buns. Rice flour rolls, pork ribs, turnip cakes, and chicken feet with a sweet and savory sauce also rank as standards on dim sum menus. It’s typically eaten on weekend mornings, though its rise in popularity means some restaurants now serve it at all hours.

Dim sum restaurants are most often characterized by pushcarts stacked with ready-made options and circulated by servers around the dining room. The food, kept warm by steam, arrives tableside for diners to take their pick. But historic Nom Wah Tea Parlor changed the format in 2011 after renovating to refresh the restaurant: Now people select dishes from a photo-heavy menu, and the food is made to order. Some other dim sum restaurants also cook this way, and Nom Wah’s Wilson Tang insists that it’s better — less waste, fresher food. —Serena Dai 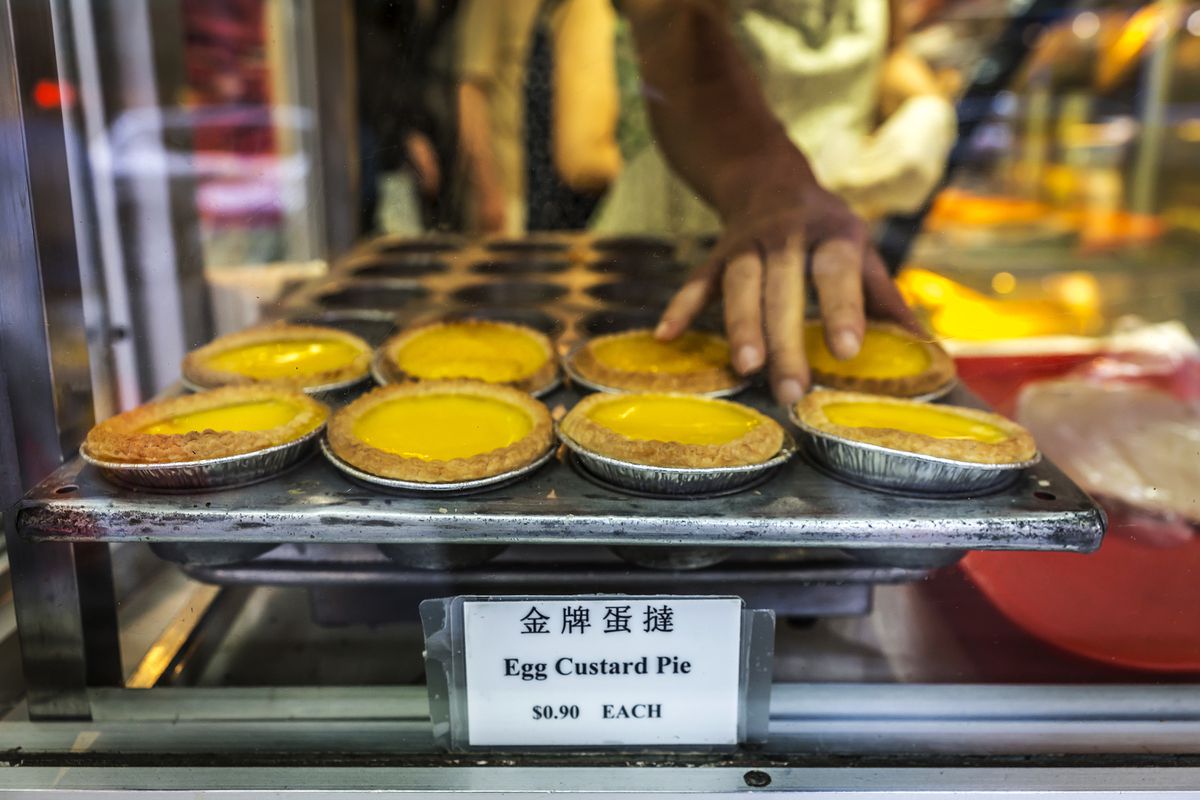 To fall in love with the Chinese egg custard tart — sweet custard in an open-faced pastry shell — means to fall in love with the Chinese bakery, a staple of the lower Manhattan culinary landscape (but a rarer institution north of Delancey). The tart can be enjoyed warm or cool, and is often consumed with tea, in the mornings when it’s freshly baked. Also known as dan ta (Mandarin), or dan tat (Cantonese) — the egg tart is symbolic of Chinese adaptation of Western cuisine. The dish became popular in Hong Kong in the mid-20th century — likely influenced by custard tarts from the occupying British and by pasteis de nata from the nearby island of Macao (once colonized by the Portuguese).

But on the mainland, in Guangzhou, egg tarts appeared in department stores even earlier, in the 1920s, perhaps as a product of the previous century’s Opium Wars with the British. In New York, as in China, patrons can expect crusts made with either shortbread (like a pie) or with laminated dough (like a croissant), a hat tip to the Portuguese. The tops should be shiny and unblemished, with a filling that’s more eggy than creamy, which is to say closer to flan than a pot de creme. If the top is spotty and burnished, fear not: You’re likely eating one that pays more homage to the Macanese variety. Expect to spend about a buck on each tart. —Ryan Sutton 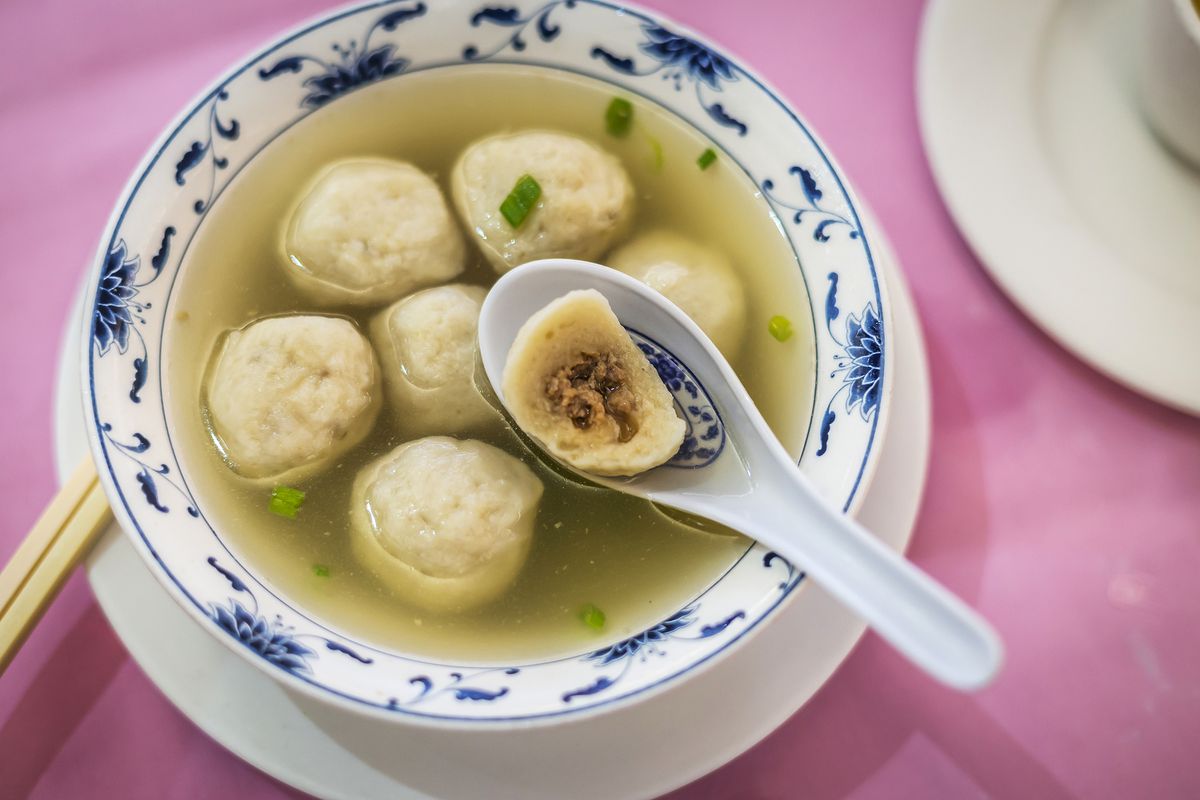 Chinatown’s Little Fuzhou — centered on East Broadway and comprised of immigrants from the Fujian province and its capital, Fuzhou — was established as recently as the 1980s, when droves of young men left the Fujian province to work in the U.S., lured by the promise of higher wages. Fujianese immigrants took jobs at construction sites and in restaurants, settling in Chinatown and bringing their culinary traditions with them.

Food from Fuzhou is considered lighter than Cantonese food, and it celebrates sweet and sour flavors. Perhaps the most ubiquitous Fuzhounese dish is the pork-stuffed fish ball. Across the region, you can find them fried, steamed, served with noodles, and served in broth. They’re essentially dumplings, where the dumpling skin is typically made from a mild white fish. To make the dough, the fish meat is pounded or ground, which, with the addition of some starch, yields the famed springy texture. Bite through the bouncy fish exterior and you’re rewarded with a rich pork meatball inside. —Madeline Muzzi 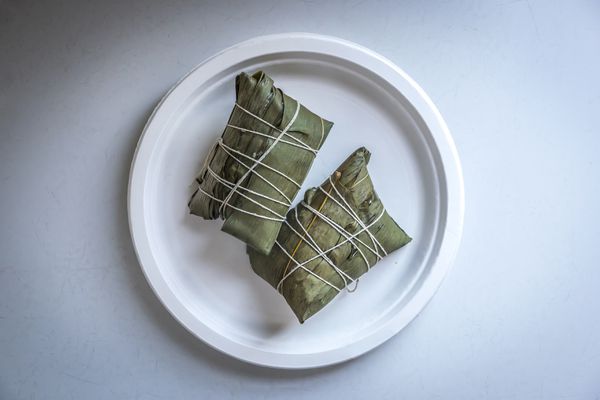 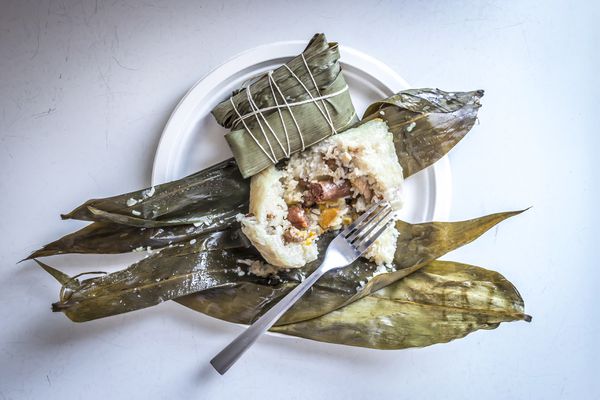 Once filled, zongzi are steamed or boiled for several hours. While wrapping zongzi in bamboo leaves is most common, lotus, banana, and pandan leaves can be also used. The art of wrapping zongzi a skill that is passed down through generations​; the food is traditionally cooked and eaten at home and ​making it is often a family affair. —Patty Diez 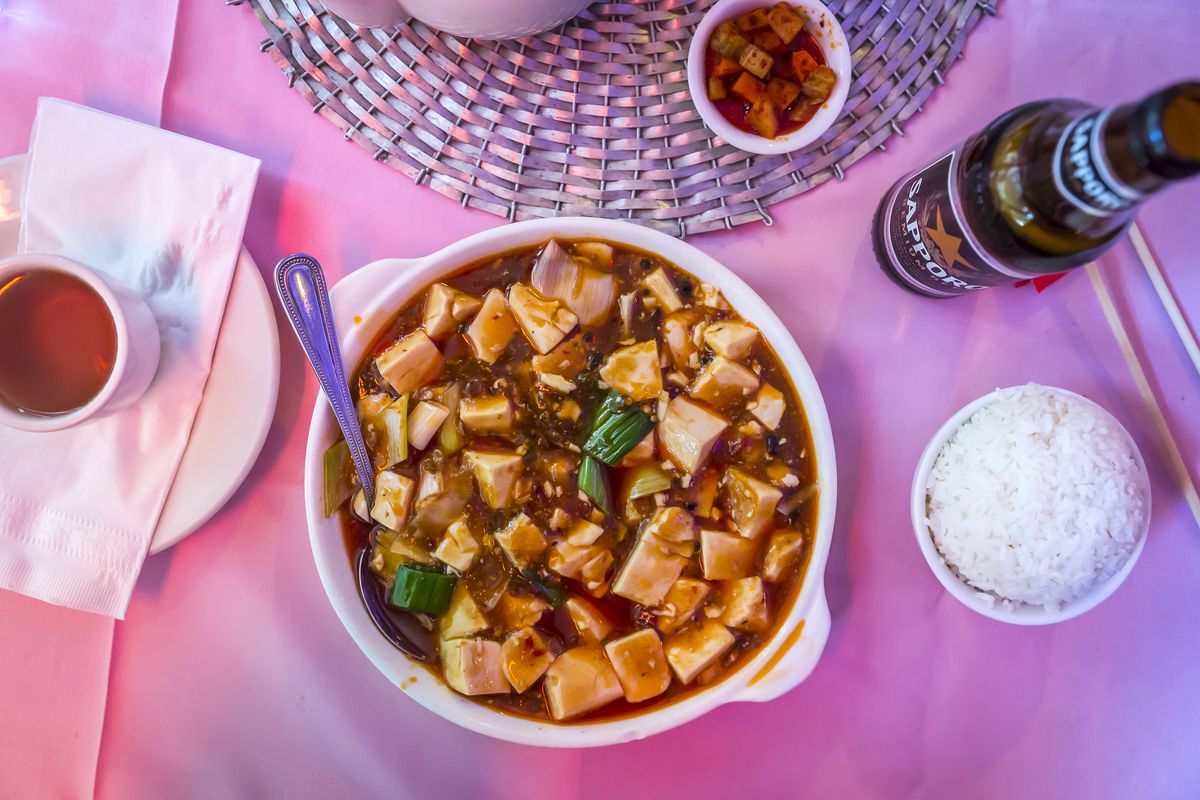 Spicy chili bean paste, numbing peppercorn, hot red oil, and just a garnish of ground meat cover silken tofu in what might be the Sichuan cuisine’s most recognized dish, mapo tofu. “Pockmarked woman’s bean curd,” as it translates, refers not to the uneven look of the sauced tofu, but — according to one version of the story — to the inventor, a woman named Chen, whose restaurant in the 1860s catered to laborers working near the province’s capital of Chengdu. Using typical ingredients of the region like doubanjiang, fiery peppers, and floral Sichuan peppercorn, as well as beef, mapo tofu soon became a favorite.

The name stuck as word spread, and the recipe was adopted in restaurants throughout the region. In the U.S., it originally gained recognition in dedicated Sichuan restaurants, but it is becoming increasingly available in places that serve more general Chinese and Chinese American fare. Usually these versions are simpler, with less spice or with pork instead of the more traditional beef; be sure to seek out a rendition that shows off the complex balance of flavors and textures making up this comforting dish. —Tammie Teclemariam

How waves of immigration shaped Chinatown and its cuisine.

Stories of food and family in Chinatown.