In the mid-1800s, Mexican workers began crossing the border for seasonal agricultural jobs in the Southwest. Some of these migrant farm workers were recruited to points north largely to work the sugar beet harvest in the American Midwest. In the mid-1910s and 1920s, immigrants arrived in larger numbers, many of them fleeing the turmoil of the Mexican Revolution. Chicago, with its robust industries, offered better-paying jobs and more stability than itinerant agricultural work.

Mexican immigrants came to work in the steel mills of South Chicago, the meatpacking houses in the Back of the Yards (the industrial neighborhood explored in Upton Sinclair’s 1906 novel The Jungle), and factories throughout the city. By 1929, Chicago was the largest outpost for emigrating Mexicans outside of the Southwest. Hull House, one of the settlement houses established in 1889 by social reformer Jane Addams to welcome immigrants, became the center of Mexican life. Located on the Near West Side close to the center of the city, Hull House offered immigrants resources including education, citizenship classes, and a place to carry on traditional arts and crafts. 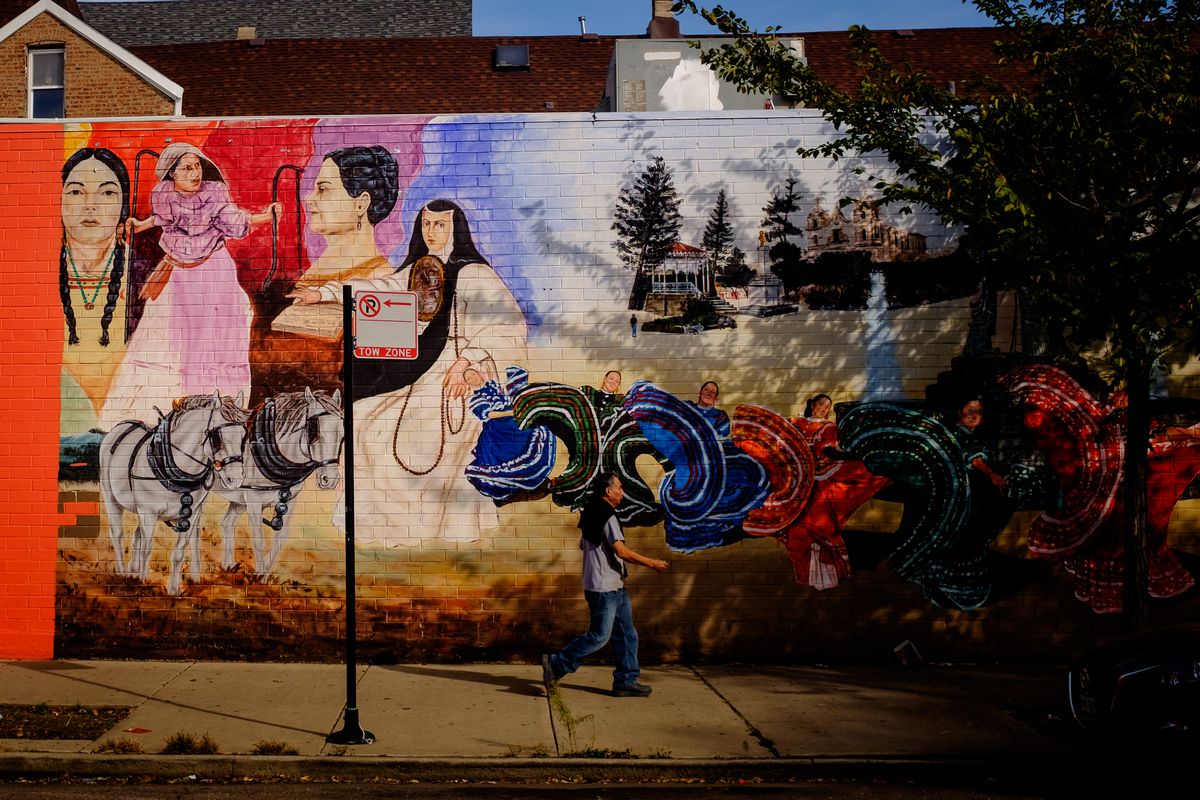 Spanish-language newspaper advertisements from the 1920s paint a picture of an emerging immigrant community establishing its foodways in a new city. There were restaurants that offered tamales diariamente — tamales daily — notable because tamales were typically eaten in the home as a special occasion food due to the amount of labor involved. For a restaurant to offer tamales — arguably the ultimate Mexican comfort food — every day was a sign that there was a solid customer base.

Restaurants promised food that was truly Mexican, using phrases like netamente Mexicanas (“distinctly Mexican”) and verdades platillos nacionales (“true national dishes”) to emphasize that immigrants would find the flavors of home. Many restaurants were named after the hometowns or states of the owner: For example, the restaurant La Moreliana, as well as the now-closed El Duranguense and El Canton de Jalisco, pulled their names from the three Mexican states of Michoacán (whose capital is Morelia), Durango, and Jalisco, where the majority of Mexican immigrants at the time had come from. This sense of regionality is also seen in the various hometown associations like Casa Michoacán, which promotes cultural activities and public assistance for the immigrant Michoacán community. 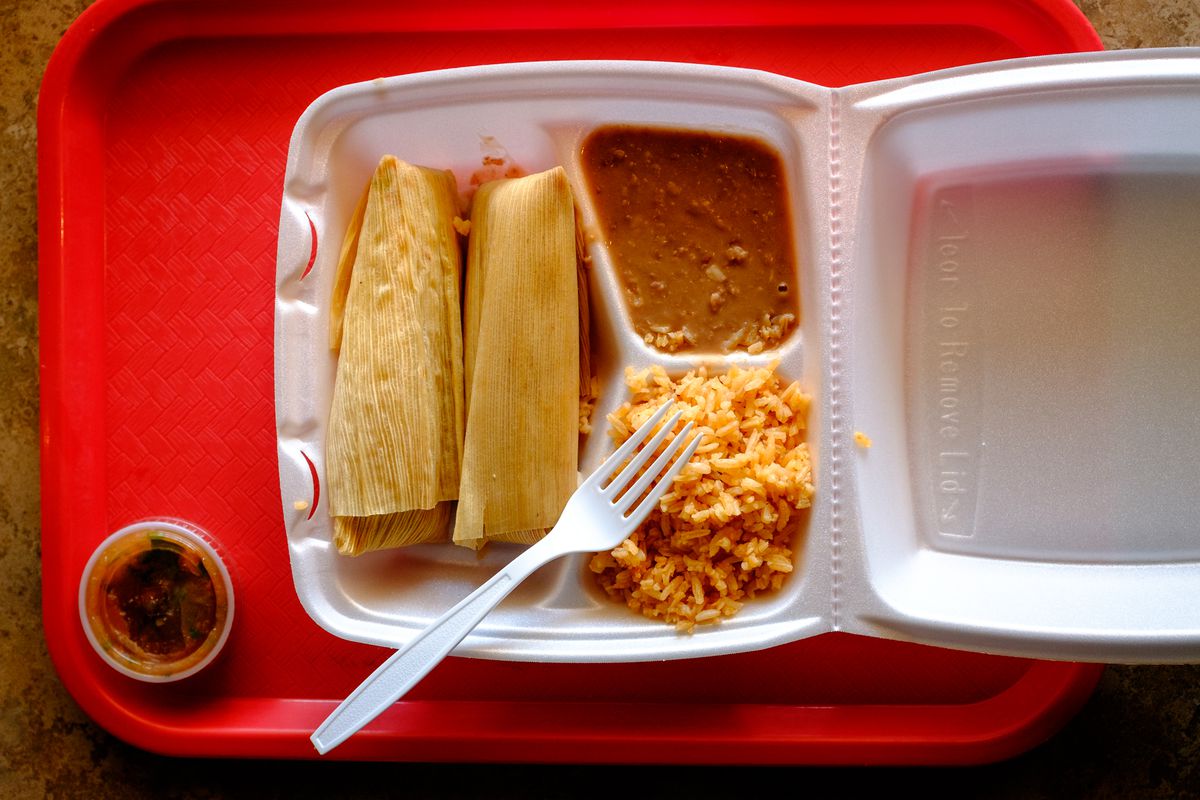 In the early 1960s, the University of Illinois at Chicago campus expanded into the Hull House colonia. Much of the neighborhood was demolished, and Mexican residents were pushed a mile south to the Czech neighborhood of Pilsen. There they found a relatively welcoming community; a 1964 Chicago Tribune series about the neighborhood noted that “the Mexican flavor has blended with ‘Little Bohemia,’” and described how restaurants serving steaming homemade sausage and dumplings existed alongside new spots serving tamales. Over the next decade, the majority of the businesses in Pilsen began to cater to the Mexican community. As the community grew, Chicago’s Mexican residents expanded beyond Pilsen. By the early 1970s, the adjoining neighborhood to the west, Little Village, had also become predominantly Mexican.

The importance of the Little Village community

Chicago now has the second largest population of Mexican immigrants in the United States (after Los Angeles), with more than 670,000 Mexican-born residents, according to the Migration Policy Institute. Demographic shifts within Chicago reflect the challenges immigrant groups face in many U.S. cities; a recent study by the University of Illinois at Chicago notes that since 2000, Pilsen has experienced a 26 percent drop in its Latino population due to gentrification. While Little Village has a larger Mexican population, Pilsen remains the epicenter of Mexican culture in Chicago with its vast collection of public murals and institutions such as the National Museum of Mexican Art and community center Casa Aztlan rooted there.

Mexican culinary expert Diana Kennedy wrote in her cookbook My Mexico: “To do justice to the foods of this extraordinarily complex country would take many lifetimes of research and travel.” For a sense of the great diversity of Mexican regional cuisine, spend a day eating in Pilsen and Little Village. Consider, for instance, the tamales at Yvolina’s, which are steamed in banana leaves instead of the more common corn husks. These are known throughout the region as tamales huastecos, typical in San Luis Potosi, the home state of owner Marcelina Hernández, and the Huesteca, the larger central coastal region along the Gulf of Mexico. The region, home to six indigenous groups, is the one of the most biodiverse in the country: Plants like bananas, sugar cane, and mangos flourish in its tropical zone, making banana leaves the most readily available wrapper for tamales. 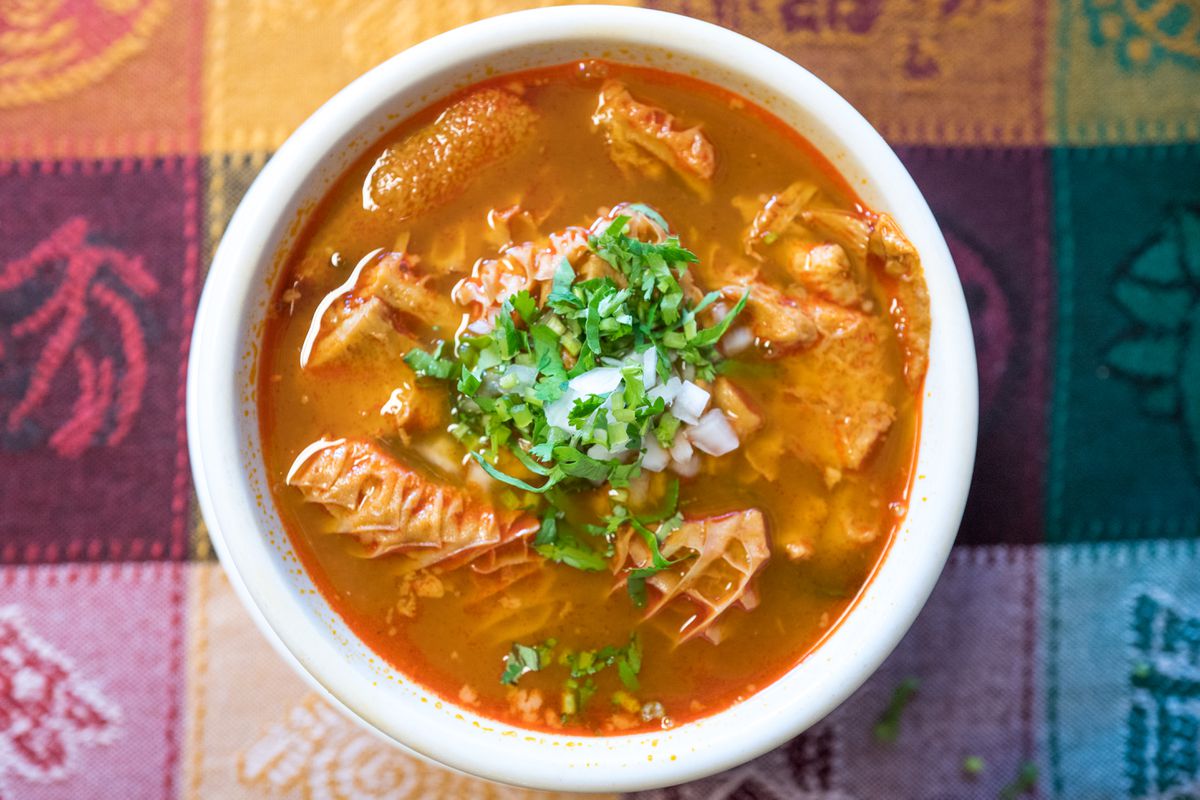 Mole, a famously complex sauce served over everything from chicken to enchiladas, comes in a dizzying array of color and flavor variations. You’ll find a wide variety in the restaurants of Pilsen and Little Village: dark brown mole poblano from the state of Puebla, mole rosa from Guerrero, and even white mole common in Oaxaca. Regional variance is also seen with menudo, a spicy soup of beef tripe believed to cure hangovers. It’s served with hominy in the northern states of Mexico, where many in Chicago’s Mexican community have roots; in other parts of Mexico, the red chile peppers are omitted.

While these dishes highlight the many variations of classic Mexican cuisine based on each region’s ingredients and preparation style, other dishes found in Chicago showcase the cuisine of a specific Mexican state. These specialties include machacado, a breakfast dish of scrambled eggs and shredded, dried beef popular in Nuevo León; Jalisco’s carne en su jugo (meat in its own juice), a steak stew with bacon and beans that is often topped with avocado, thin slices of radish, and cilantro; and mangonada, a blend of frozen mango and chamoy (a chile-spiked condiment made from pickled fruit) with lime and chile powder, a sweet drink with a little heat from the coastal state of Michoacán.

More on this dish

Across Mexico, tortillas are a staple, so it’s no surprise that a number of tortillerias opened in Chicago to provide this essential food to the community. El Milagro, one of the larger tortillerias, with adjacent restaurants at its Pilsen and Little Village locations, was established in 1950. As at most other tortilla shops in the area, cooks can purchase fresh masa to make their own tortillas at home, and a coarser masa for making tamales, as well as fresh tortillas. Many tortillerias mill their corn on-site and work with the freshest nixtamalized corn. Nixtamal (a Nahuatl compound word referring to ash and dough) is the process of cooking and soaking maize in an alkaline solution before it is milled. It’s an ancient process that renders this variety of corn digestible — and makes its nutrients more available — and allows the corn to form into a dough. 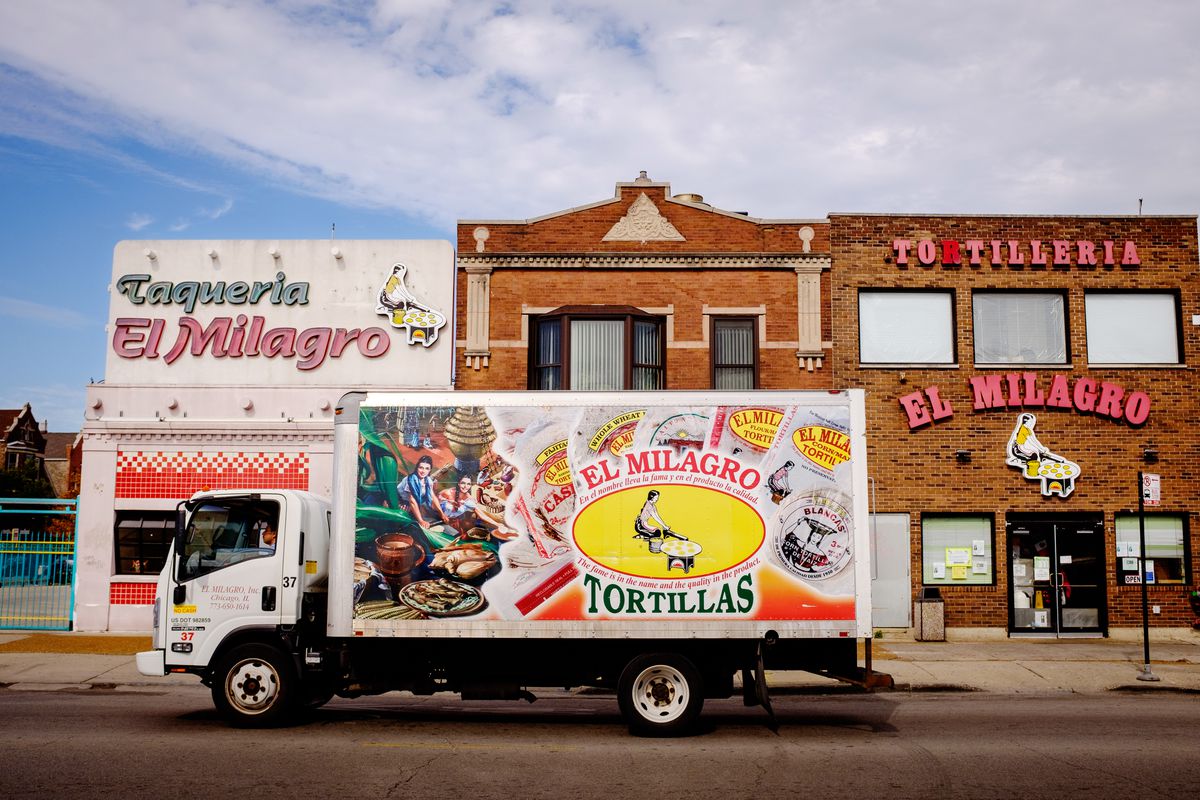 Outside El Milagro on 26th Street in Pilsen.

Mexican grocery stores and carnicerias also thrive in Chicago. Mexican butchers break down meat differently than their American counterparts. For instance, beef is often cut into thin slices or cubes for the many dishes that feature stewed or grilled meats like carne asadas and caldos, or soups. Carniceria Jimenez is an example of a small business that expanded to meet the demands of the growing Mexican population outside of Pilsen and Little Village; it opened its original location in Little Village in 1975 and now has nine stores.

Local supermarket chains Carniceria Guanajuato and El Guero have similar stories of expansion to meet the community’s needs. Pilsen grocery store La Casa del Pueblo started as a small, Italian-owned produce shop called California Fruits and Vegetables; as more and more Mexican immigrants moved into the neighborhood, the store began importing products from Mexico, and in 1960 relocated and opened under their new name.

Chicago has even become a hub for the production and distribution of Mexican foodstuffs in the United States. V&V Supremo, for instance, began in 1964 when two natives of Michoacán started making queso fresco to cater to the “discerning palates of the rural Central Mexican immigrants that populated Chicago,” according to the company’s history. The Pilsen factory now employs more than 240 people and distributes its cheese and other products nationally. La Preferida, the prepared foods giant known for its canned beans and salsa, also began as a family enterprise in the 1920s, making chorizo for the growing Mexican community in Chicago. El Milagro, which still maintains a serious presence in Chicago, has grown to open tortillerias in Austin and Atlanta.

Despite its size, Chicago’s Mexican community hasn’t always garnered the attention that communities in California and the Southwest have. But one non-Mexican Chicagoan has been instrumental in raising awareness in the United States about Mexican cuisine: chef Rick Bayless. His name, for many, is synonymous with Mexican cuisine, and though it’s no secret that he’s a white chef who has gained notoriety for his Mexican cooking, Bayless has also garnered attention for his efforts to support Mexican immigrant chefs in Chicago and for his charitable endeavors. Bayless’s 1987 cookbook, Authentic Mexican, directed home cooks to search for ingredients that had long been available in the supermercados of Pilsen and Little Village.

It might be a stretch to say that Mexico’s 31 states comprising several cultural regions are all represented in Chicago, but between the many diverse Mexican restaurants and the ingredients available in the markets, it comes close. The demographics in Pilsen are shifting as this neighborhood faces an increase in gentrification. As a result, Mexican households are increasingly dispersed throughout the city and surrounding suburban areas, though the population of Mexicans in the city as a whole remains unchanged. But the central corridor of 18th Street in Pilsen along with West 26th Street — the main drag of Little Village — continues to reflect the vibrancy of the Mexican community in Chicago, as well the diversity of the cuisine. ■