The New Guard: Six Restaurants Changing What it Means to Dine in the City 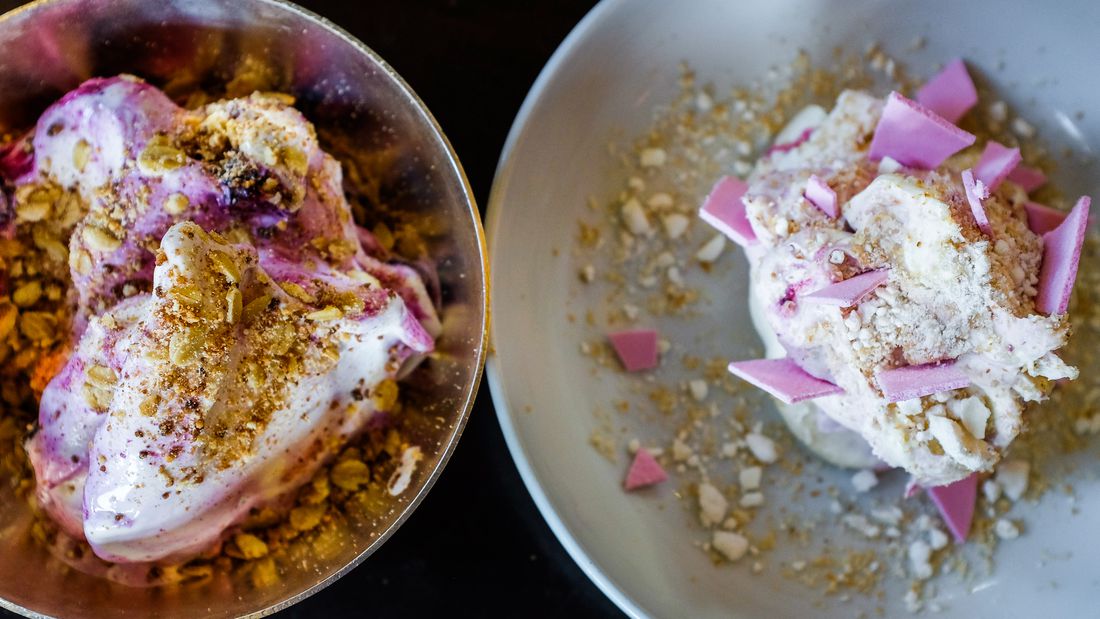 "Mutton broth, puffball, and ramson" is a typical description of a dish on the short but ever-morphing menu at Lyle’s. Puffballs look like the baby chicks of the fungus world; ramsons hail from the chive family. At my lunch, the broth shimmered with meaty flavors, clean yet rich, and the other ingredients drew out other sharp, earthy notes. Everything that emerged from James Lowe’s kitchen came across like nourishing haikus that sounded and looked simple but tasted profound.

Lowe once ran the kitchen at St. John Bread and Wine, and he previously staged pop-ups with The Clove Club’s Isaac McHale (see below) as part of a collective that called itself the Young Turks. His first solo venture opened last spring in Shoreditch and has become a favorite of London’s food-obsessed. It epitomizes the crux of London's restaurant vanguard, so similar to the coup in American fine dining: informal, warm, and playful in tone, with food that elicits a level of delight and revelation once reserved for starched halls of grand gastronomy. At night the restaurant serves a tasting menu. I would be a midday regular, when Lyle’s goes a la carte for lunch and soft light pours into the dining room at the bottom of the Tea Building — which, yes, was once a Lipton’s factory. 56 Shoreditch High Street, London E1 6JJ, 020-3011-5911, lyleslondon.com. 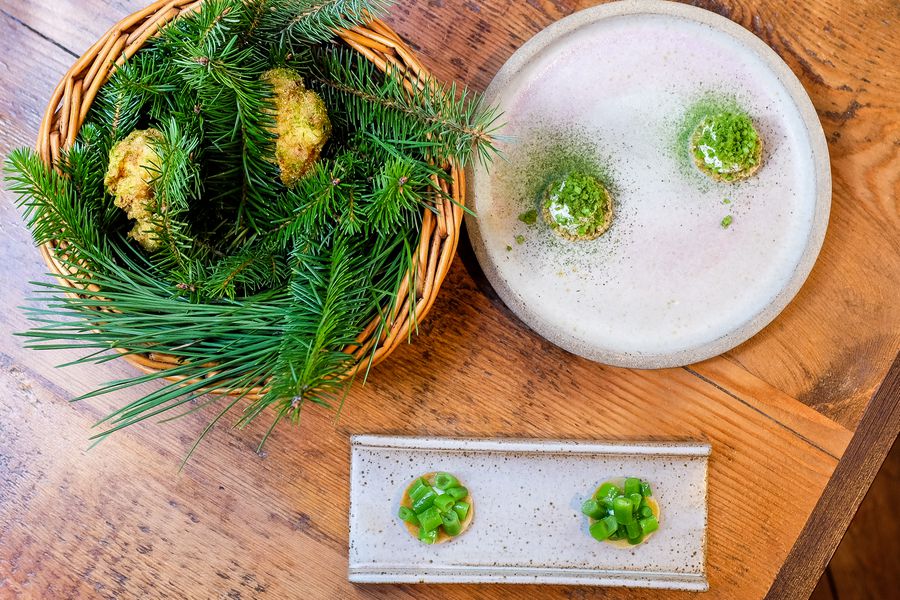 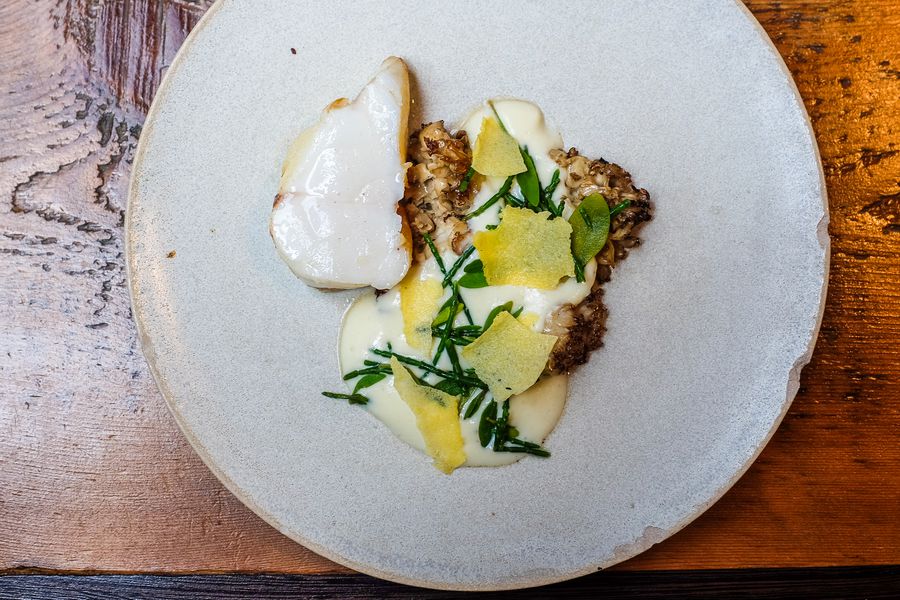 Pine salt-dusted fried chicken and monkfish with mushrooms at The Clove Club; lead image above, desserts at the Marksman

The smirched stone façade of the former Shoreditch Town Hall (built in 1907 and now an arts center) looks imposing — haunted, even — from the outside. Stepping through a beckoning side door painted royal blue leads to The Clove Club’s bar and dining room, cheering with their high ceilings and big windows and bright white walls. Gifted chef Isaac McHale crafts the most eloquent of tasting menus. His restaurant made news earlier this year by being the first London establishment to adopt restaurateur Nick Kokonas’s Tock ticketing system. (Only dinner requires an upfront payment; lunch, when I went, was spectacular.) McHale reels in diners with a snack of hot, crackly fried chicken dusted with pine salt. From there his kitchen unleashes a sequence of edible collages — monkfish with cauliflower mushrooms (which look just as they sound), beef featherbone (a shoulder cut) with tempura beans and a scorched young onion — that revel in of-the-moment ingredients but reveal Nordic, Japanese, and even subtle Indian influences. 380 Old Street, London EC1V 9LT, 020-7729-6496, thecloveclub.com.

Imagine San Francisco’s Zuni Cafe reconfigured to a British framework — two floors of clubby, cozy rooms and a kitchen that favors cooking over a charcoal-fueled grill — to grasp the appeal of Kitty Fisher’s. It’s become the whole city’s neighborhood restaurant. The moniker name-checks a famous eighteenth century courtesan; it sits among a cluster of businesses in Mayfair’s Shepherd Market, historically one of London’s red-light districts. (Wall sconces in the restaurant glow scarlet in tribute.) Mediterranean breezes waft from the menu. 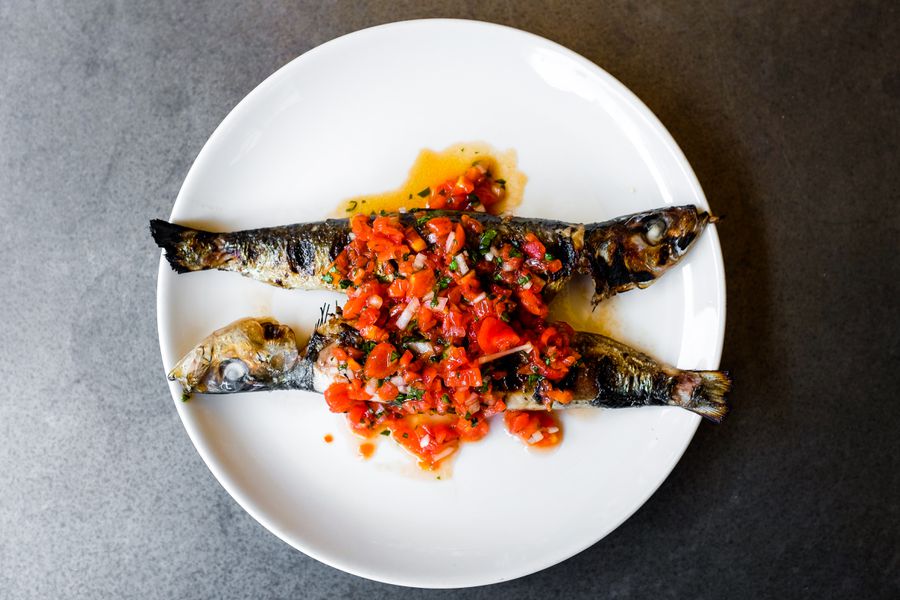 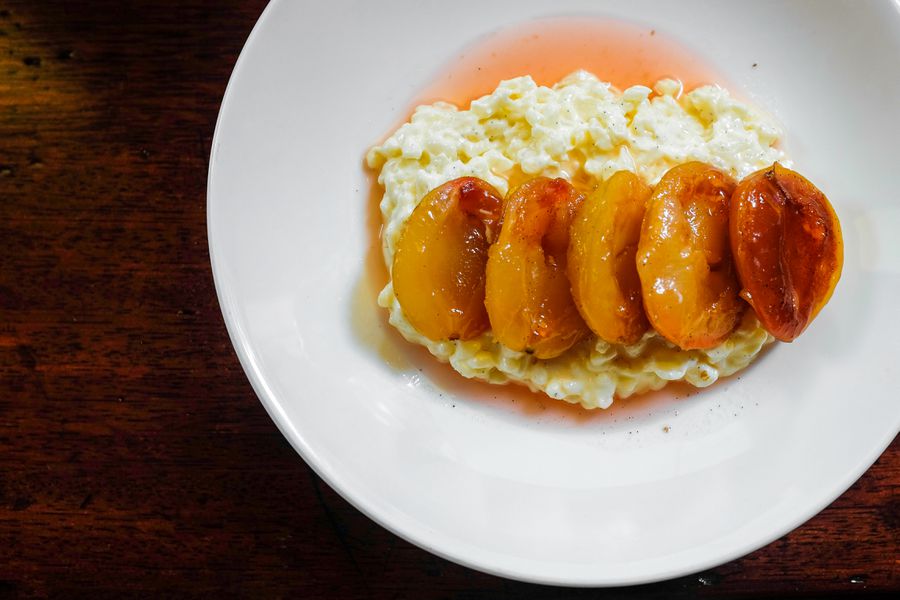 Start with whipped cod roe piped over oblong slices of toast or grilled sardines. But devote most of your appetite to the off-the-menu signature: ribeye for two cooked to magenta and served with sides of spinach covered in pickled, sliced walnuts and smashed potatoes blasted with grainy mustard and melted blobs of bloomy-rind Tunworth cheese. And I can't recall a more lulling dessert this trip than the cumulous cloud of rice pudding with vanilla bean-flecked apricots. 10 Shepherd Market, London W1J 7QF, 020-3302-1661, kittyfishers.com.

Tom Harris and Jon Rotheram wince if anyone refers to the 150-year-old institution they now operate as a "gastropub." So think of it as a restaurant serving of-the-moment British comforts cohabitating with a mahogany- and plywood-lined pub where locals still gather for pints and conversation. 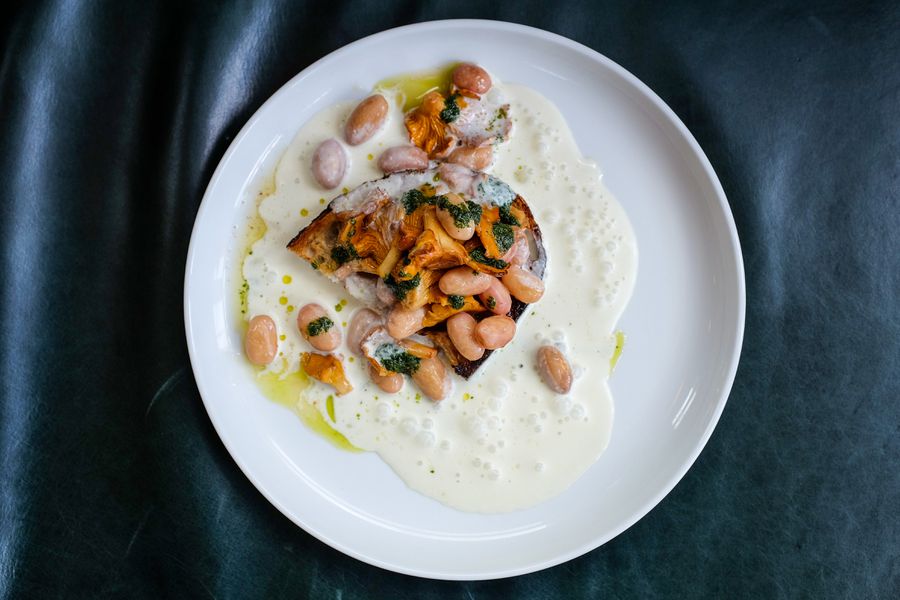 Chanterelles and borlotti beans over toast at Marksman

Harris and Rotheram met working at St. John, and they nail a style of cooking that soothes while also dazzles with impeccable execution. The early star is a British curry — sometimes goat or mutton; I had duck— served with sourdough roti, tomato chutney, fried potatoes, and a splatter of yogurt dressing reminiscent of raita. Start with carby pleasures like a plush bun filled with long-simmered beef and barley topped with grated horseradish, or girolle mushrooms (a.k.a. chanterelles) and borlotti beans over toast and creamy tarragon dressing. 254 Hackney Road, London E2 7SJ, 020-7739-7393, marksmanpublichouse.com.

Launched at the end of last year in a former clothing showroom in the central Fitzrovia neighborhood, Portland’s interior recalls the look of small, striving restaurants one finds anywhere in America: dangling lights, tufted banquette, open kitchen. The restaurant’s energy comes through in its edgier proteins, starting with a snack of crisp chicken skins used like crackers to hold fluffy pureed liver, walnuts, and Muscat grapes. Food-wise, an entree of deer ("We don’t call it venison; it is what it is," said our server) with purple carrots and pickled elderberry sauces most impressed. The concise wine list stole the evening with its spot-on tasting notes and easily navigated categories. No surprise, since co-owner Will Lander’s mother is famed wine journalist Jancis Robinson. 113 Great Portland Street, London, W1W 6QQ, 020-7436-3261, portlandrestaurant.co.uk.

Dinner is four years into its run, and as a splurge destination the restaurant proved to be in top form. (And also a relative bargain to Blumenthal’s The Fat Duck, which reopened last month charging £255 — or $400 — per person.) My London mates deemed Dinner "touristy," not a surprise given its location at the Mandarin Oriental across from Hyde Park. I didn’t care; I loved the restaurant’s conceit of rifling through 600 years of British culinary history to arrive at its au courant menu. 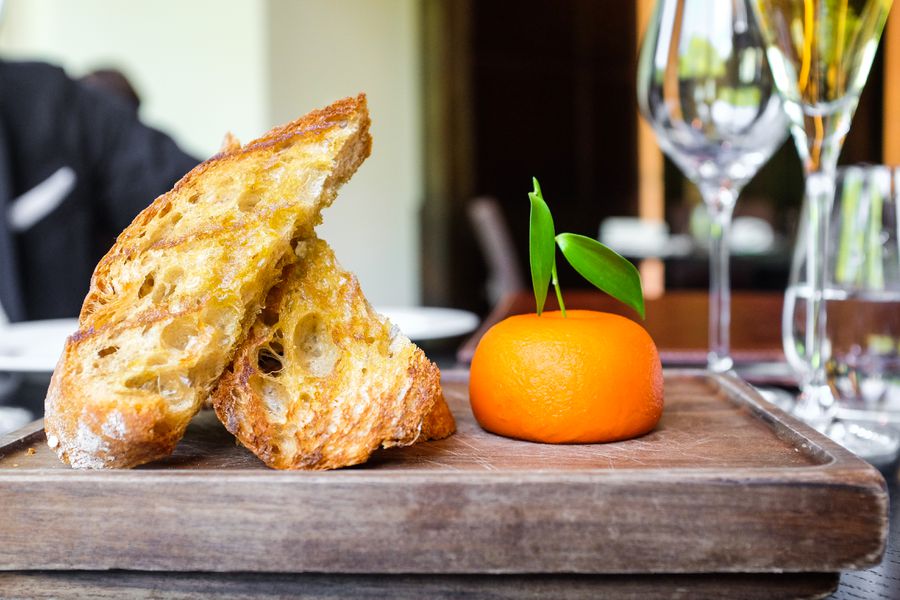 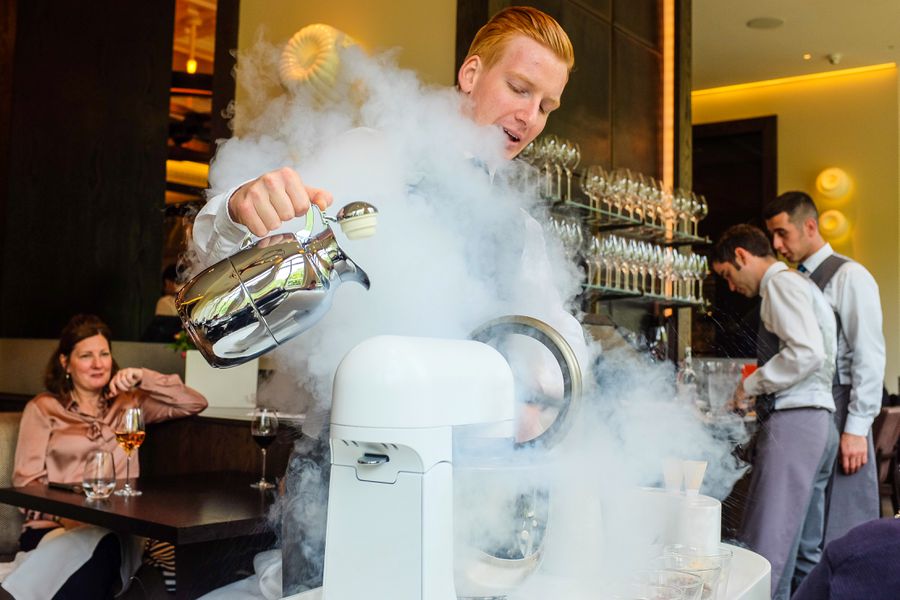 There was no sidestepping the two most famed dishes: trick-of-the-eye meat fruit, in which mandarin jelly covers chicken liver and foie gras parfait in a shape that exactly replicates the citrus, and "tipsy cake," brioche doused with Sauternes and brandy and served with a sliver of spit-roasted pineapple. Both lived up to their renown. Other dishes equaled their pleasure, especially a circa-1390 risotto of sorts golden with saffron and dabbed with calf’s tail meat cooked in red wine. Mandarin Oriental, 66 Knightsbridge, London SW1X 7LA, 020-7235-2000, dinnerbyheston.com.