The 15 Essential Foods of the Pacific Northwest

In celebration of salmon candy and Seattle dogs

Share All sharing options for: The 15 Essential Foods of the Pacific Northwest

If there is a single culinary zeitgeist within the Pacific Northwest, it’s an obsessive, dedicated interest in seasonal and local cooking. The stereotype thrives for a reason — the region’s expansive farmland, wild natural spaces, and generally stable climate make it an all-access ingredient theme park. Potatoes are rolling out of Idaho at an alarming rate, salmon leap out of Washington rivers into burgers, sashimi, and whippy pink piles of mousse, and Oregon berries are almost impossible to avoid when they’re in season. People here lose their shit over wild mushrooms, trudging through muddy forests in search of sunny chanterelles and puckered morels, and Washingtonians will drive silly distances to pick their own apples or pears — the state grows the most of both in the U.S. 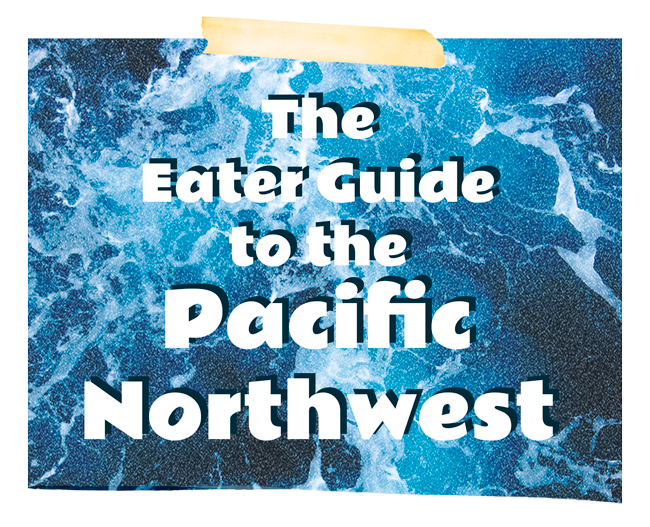 While pinpointing the quintessential dishes of the Pacific Northwest is tricky, there are some culinary experiences that unite us: trips to the coast marked with pit stops for salmon candy, tofu-based “egg salad” sandwiches packed in lunch boxes; festival snacks of hot dogs dipped in pancake batter or slathered with cream cheese. Below is a celebration of some of the freshly iconic foods of the Pacific Northwest. Pickles not included.

In the 1950s, researchers in Marion County, Oregon, perfected the blackberry. A cross-species of Chehalem and Olallie blackberries, marionberries rely on Oregon’s volcanic Jory soil and cool nights to create a massive, sweet-tart-floral variety that looks like a juiced up blackberry. When they begin ripening on vines in July, you’ll find marionberry pie across the state — Willamette Valley Pie Company in Salem, Oregon, sells it to eat in or to go. If you miss the season, marionberry jam, infused vodka, and marinades are sold at basically every gift shop in the region.

Walla Walla onions are the Vidalias of the Pacific Northwest — incredibly sweet, large white onions that make ideal onion rings. Diners throughout the region serve buttermilk-dunked versions of these crispy rounds, and come summer, the frenzy around the seasonal Walla Walla rings at regional chain Burgerville rivals that for the McRib.

Café Yumm!, an Oregon-based chain, serves a customizable burrito-like bowl of rice, beans, cheese, pico de gallo, and other vegetables drenched in a tangy sauce that’s key to the bowl’s cult-like status. The secret sauce has a consistency similar to hollandaise, a Mediterranean-ish kick of lemon and chickpeas mixed with nutritional yeast, and transforms what would otherwise be a pretty basic burrito bowl into a beloved regional specialty. The spicy jalapeno-sesame salsa is equally essential.

People are so obsessed with salmon here it’s a little creepy. The wildly popular (and increasingly endangered) local fish can be found cooked on cedar planks in restaurants, mashed into burgers at cookouts, smoked and whipped into cream cheese, and fried for baskets of uniquely pink fish-and-chips. Seafood shacks along the coast sell heavily smoked chunks of sockeye or Chinook as “salmon candy,” an almost jerky-like snack tossed in a marinade sweetened with maple or brown sugar syrup. The classic beach-trip treat can be picked up at most any fish-and-chip stand or fish markets, but a particularly excellent version comes from the South Beach Fish Market in Newport, Oregon.

Coming in a distant third in popularity behind the Coney Island and Chicago varieties, the Seattle hot dog is a local delicacy, especially beloved by sports fans. Smeared with cream cheese and topped with sauteed onions, the variation originated at a late-night bagel pushcart owned by Hadley Long, who started serving hot dogs in bialys with cream cheese. Today’s Seattle dogs are most often served in buns, and can be spotted at stalls around T-Mobile Park, as well as old-school venues and dives, and legend has it they fueled many of Seattle’s famous punk and grunge legends. Pro tip: Many carts offer jalapenos as an additional topping for a lick of heat and crunch.

Corn dogs can be found throughout the U.S., but old-school Oregonians are serious about their Pronto Pups, allegedly the first corn dogs, originally sold on Oregon’s Rockaway Beach in 1939. Pronto Pups use more of a sweetened pancake batter, low on the cornmeal, so think of these as oversized pigs in blankets.

Drinking foods are a way of life in Portland, and the homegrown remedy of choice is Totchos: Tater Tots with the usual nacho toppings, often including cheddar from Oregon’s Tillamook Creamery. The actual Tater Tot was invented in Oregon in the early 1950s, but the first totchos didn’t show up until 2006, at Oaks Bottom Public House in Portland’s Sellwood neighborhood. Today, countless versions of the dish appear at Portland bars and hot dog shops, including cheffy twists with bonito flakes or smoked salmon — shocker.

The Pacific Northwest’s vegan community is, to say the least, robust. As such, the region has long been on the forefront of meat-replacement foods like Tofurky, whose main factory is based in Hood River, and its main contender, Field Roast, based in Seattle. But nothing matches the local nostalgia for Toby’s Tofu Pate, an egg salad-like dip born in an Oregon kitchen in the 1970s. Many a school lunch or party buffet in the ’80s and ’90s featured a Toby’s sandwich or dip front and center. Today you can find Toby’s in grocery stores across the Pacific Northwest.

Thanks to people like Toshihiro Kasahara of Toshi’s Teriyaki Restaurant and John Chung of Woks Deli and Teriyaki, teriyaki became Seattle’s iconic grab-and-go lunch staple in the late 20th century. A soy sauce-sugar marinade, sticky and sweet, is lacquered on boneless chicken thigh, which is then grilled and served over rice with a side salad. It’s now found throughout the Pacific Northwest, from Du’s Grill in Portland to Oishii Teriyaki & Rolls in Bellingham, Washington.

Cows rival potatoes as Idaho’s main agricultural export, so it makes sense that the state’s official bar snack is a beefy twist on the chicken strip. Idaho finger steaks lie somewhere between a chicken-fried steak and french fries, and most agree they originated at Milo’s Torch Cafe in Boise. Today, most bars throughout Southern Idaho serve baskets of breaded-and-deep-fried steak strips alongside small cups of bright-red cocktail sauce.

If you were a child of hippie parents in Oregon (so, essentially everyone), you might remember spending summers licking up drips of melty, chocolate-covered, vegan Coconut Bliss ice cream bars at the seasonal bacchanal known as the Oregon Country Fair. Again, thanks to the region’s large vegan population, it’s a hotbed for animal-free variations on favorite foods, including this coconut milk-based treat. Aside from the staple Coconut Bliss, some of the country’s most popular brands are made in the region, including the grocery store titan So Delicious.

Slim Jim this is not. Pacific Northwestern charcuterie company Olympia Provisions is known across the country for its picnic-ready sausages, pates, and hard salamis. But the pepperettes — sort of like the tiny pepperoni sticks found at gas stations — are reserved for less formal occasions. These get thrown in gift bags, grabbed at convenience store counters, and tucked away before long backpacking trips, and come in flavors like paprika and garlic or caraway and coriander.

Although several doughnut shops around the country serve bacon-topped doughnuts, popular opinion considers Voodoo Doughnut, the pseudo-punk, hot-pink shop in downtown Portland, the progenitor. Full slabs of thick-cut, crispy bacon were first added to maple-glazed bars in 2003, well before the Great Bacon Craze of 2009. The salty-sweet crullers are praised by everyone from Brad Pitt to the late Anthony Bourdain, but locals tend to avoid the shop’s lines and hoards of tourists. Voodoo’s competitor Blue Star Donuts sells a brioche version they call the “Real Maple Bacon” featuring pure maple syrup.

Oregon grows 98 percent of the country’s hazelnuts, which are as inseparable from the local cuisine as marionberries and salmon. They’re thrown in salads, munched plain, and crushed up as a coating for fish, but come the holidays, it’s all about the ones covered in chocolate. Many Oregon kids grew up scarfing fistfuls come December, and tourists are basically required to tote home a few bags as souvenirs. These were likely filled at the Pacific Hazelnut candy factory — one of the main producers of chocolate-covered hazelnuts — in Aurora, Oregon (also home to an entirely hazelnut-themed restaurant), or one of the countless roadside stands along any Willamette Valley highway.

An essential Washington fair food, Fisher scones — also known as fair scones — are soft, pillowy scones served with honey butter and raspberry jam. Scones debuted at the state fair over a century ago, and today they’re the closest thing we have to an official state baked good — the Fisher flour company has sold more than 100 million in its history. While there are several copycat recipes on food blogs, the real-deal is regularly (and best) devoured at the Washington State Fair in Puyallup.

Brooke Jackson-Glidden is the editor of Eater Portland.
Carolyn Figel is a freelance artist living in Brooklyn.
Edited by Lesley Suter

The Tycoon of Teriyaki

The Greatest Places to Eat in Seattle’s Greatest Tourist Trap

An Oral History of Grunge Food

View all stories in The Eater Guide to the Pacific Northwest