What Brands Are Actually Behind Trader Joe’s Snacks?

Share All sharing options for: What Brands Are Actually Behind Trader Joe’s Snacks?

Mark Gardiner was a former VP of marketing and an advertising consultant before taking a job as a crew member at a Trader Joe’s store in Kansas City six years ago. Despite being a bit overqualified, he had an agenda: a personal mission to uncover the secrets behind the grocery chain’s huge success. In the end, he walked away with enough intel to write a book revealing some of the business’s branding tactics. But even from the inside, Gardiner could not unveil Trader Joe’s biggest and best-kept secret: the hush-hush identities of the companies that produce the grocer’s beloved products.

As a private brand, the California-based Trader Joe’s orders most of its products from third-party manufacturers (including giants like PepsiCo. and Snyder’s-Lance), which agree to sell some of their items under the Trader Joe’s label. Many of these brands sell the same or similar products under their own names for a higher price. The catch is that Trader Joe’s and its suppliers all but swear to keep the agreement secret. "Suppliers aren’t allowed to say they supply Trader Joe’s products,” Gardiner says, “and Trader Joe’s never willingly talks about who their suppliers are.”

On top of that, Trader Joe’s executives and owners are notoriously tight-lipped about operations and hardly speak to the press about the business. Requests for details, especially about manufacturers, are generally declined.

That hasn’t stopped many from speculating and trying to sniff out Trader Joe’s suppliers (last year, Eater SF identified La Boulangerie as a supplier after getting a behind-the-scenes look at its factory). In fact, there are a few sneaky ways to unmask them. One trick is to look at recall information. When a product is recalled or flagged by the Food and Drug Administration or United States Department of Agriculture, the product manufacturers generally publish all the stores and brand labels under which that item is sold.

Eater used Freedom of Information Act requests to obtain FDA and USDA recalls and alerts that mentioned Trader Joe’s in the last 10 years. The requests revealed dozens of companies that have, at least at one point, supplied Trader Joe’s with food. 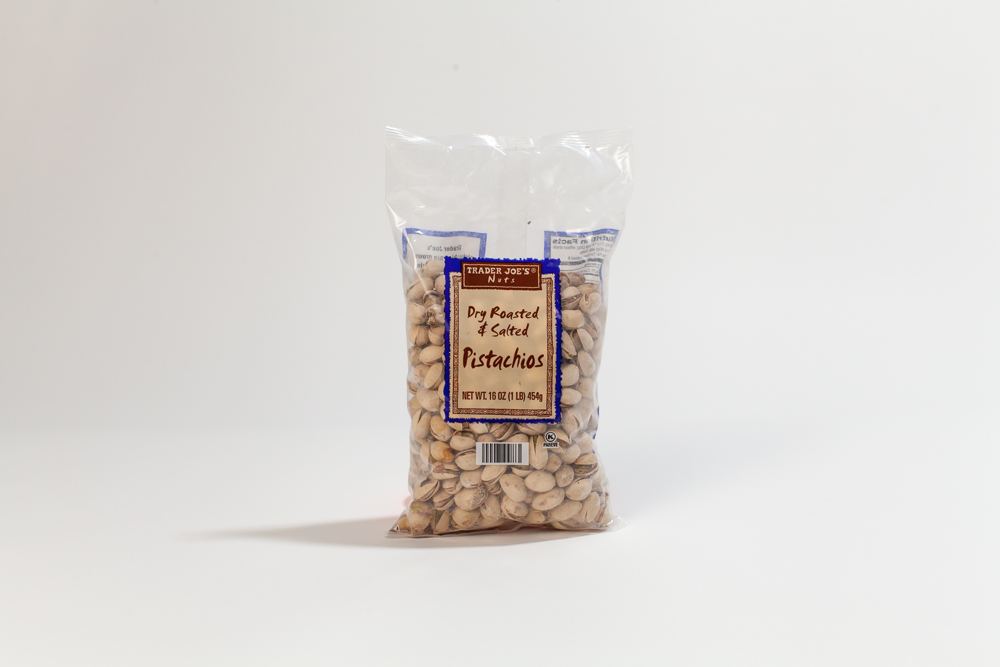 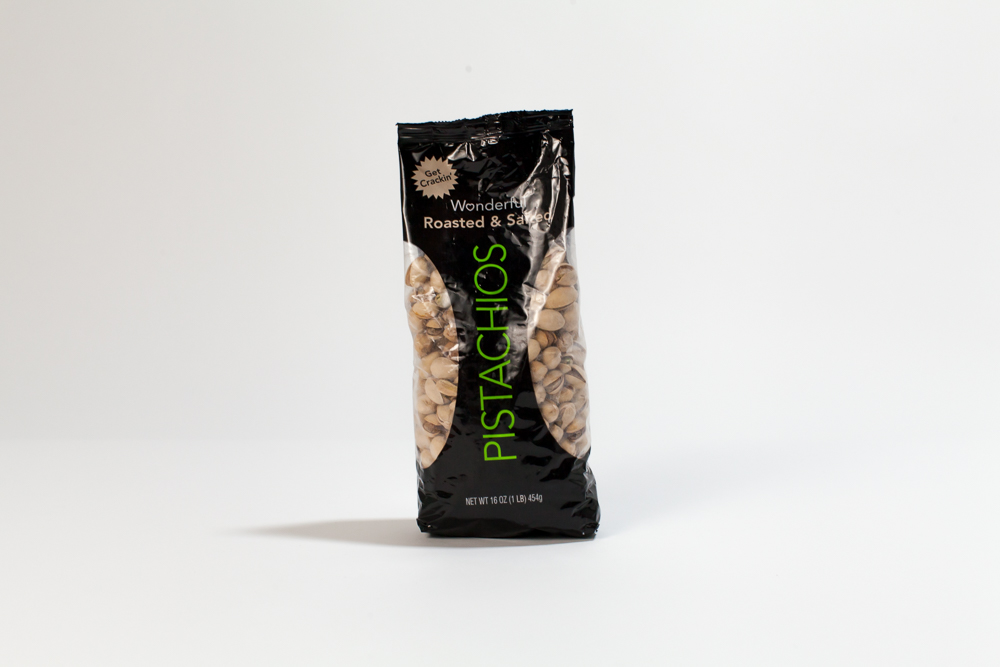 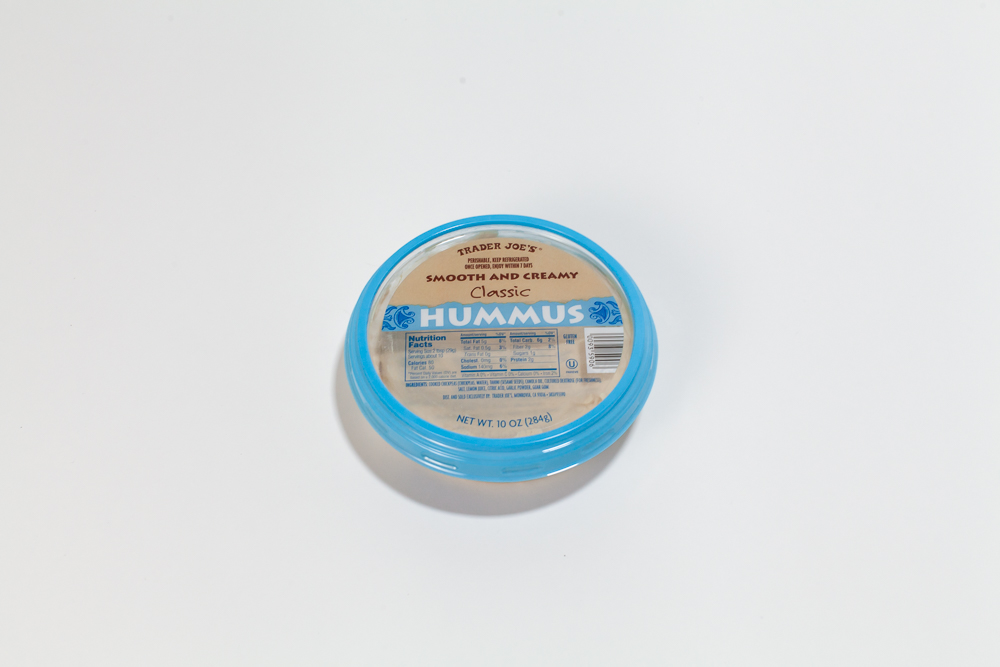 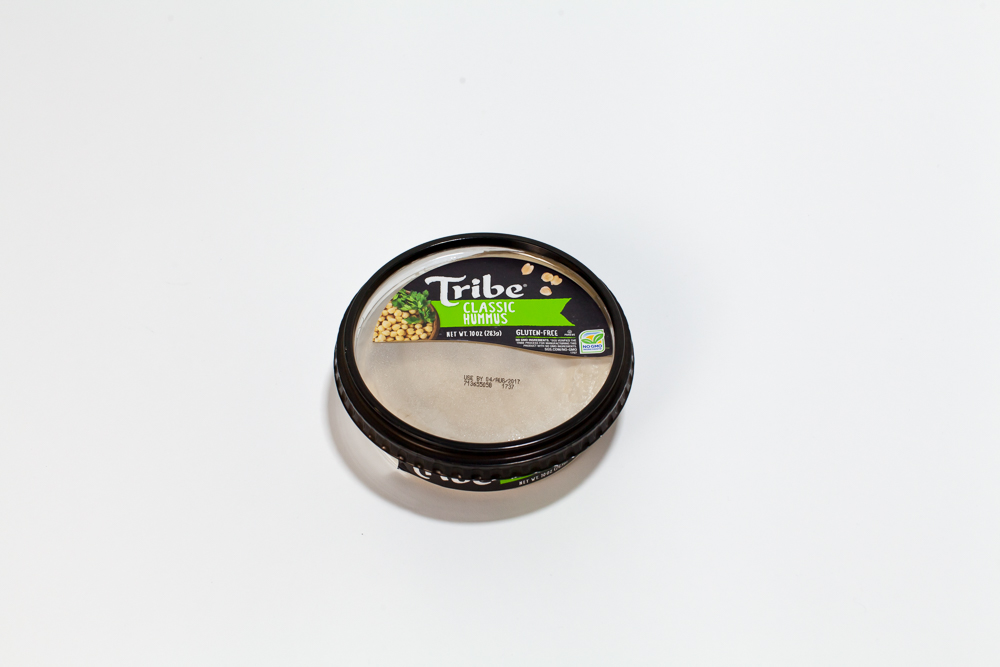 Tribe Mediterranean Foods, at least in the past, has supplied Trader Joe’s hummus. 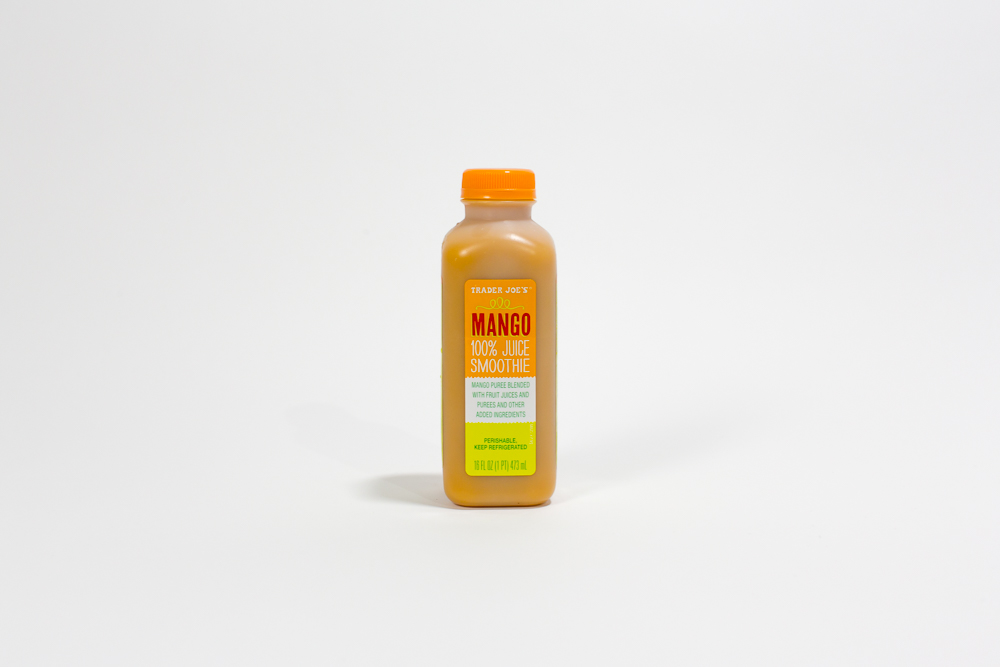 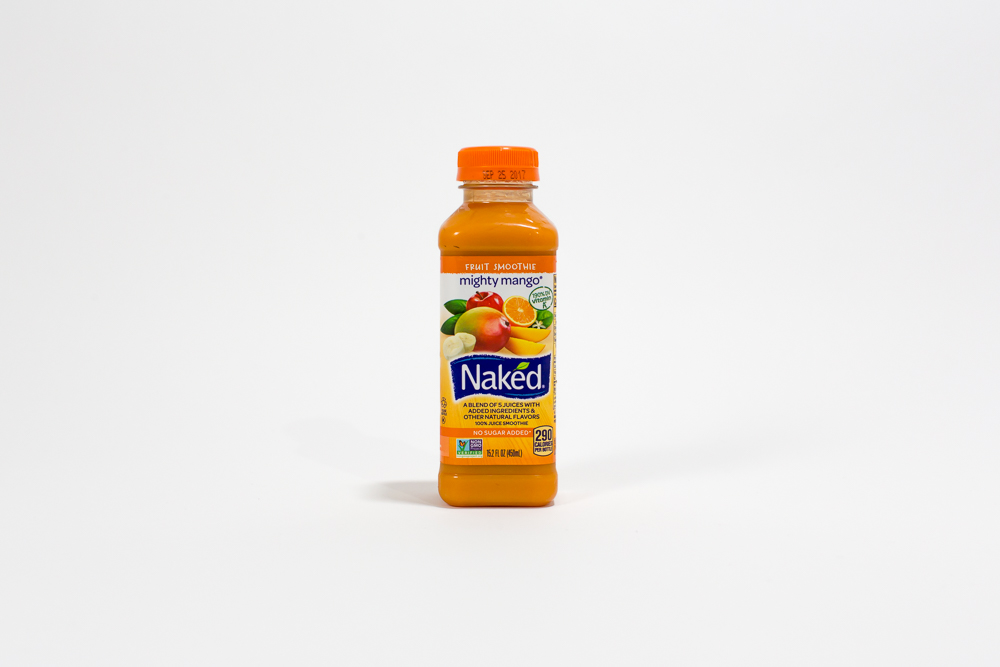 In March 2016, Wonderful Pistachios & Almonds LLC, which produces the Wonderful Pistachio brand, issued a recall for three types of pistachios sold at Trader Joe’s, including the dry-roasted and salted variety. A year prior, the makers of Tribe hummus recalled a brand of Trader Joe’s tahini-free hummus because it may have contained sesame seeds. And Naked Juice, the PepsiCo. subsidiary and leader in bottled smoothies, supplied the grocer with protein fruit smoothies, recalling them in 2008 over yeast and lactic acid bacteria.

Other Trader Joe’s products come from huge manufacturers like ConAgra, the company behind household brands like Hunt’s canned tomatoes and Marie Callender's microwave dinners. A ConAgra recall in 2016 resulted in organic sweet corn being taken off Trader Joe’s shelves.

Chances are, these companies supplied the chain with other flavors and varieties, and still might. In fact, ingredients for the various Trader Joe’s flavors of pistachios, hummus, and smoothies that Eater analyzed are almost identical to their Wonderful, Tribe, and Naked counterparts — but more on that later.

Of course, not all the suppliers are well-known labels. Of the dozens of manufacturers unveiled through recall documents, most are smaller companies with which shoppers may not be familiar. And this is by design. “Trader Joe’s loves to have exclusive relationships with suppliers,” Gardiner says. In many cases, Trader Joe’s may be the primary or even sole private label selling a manufacturer’s food, “so there are some truly unique products,” Gardiner says. 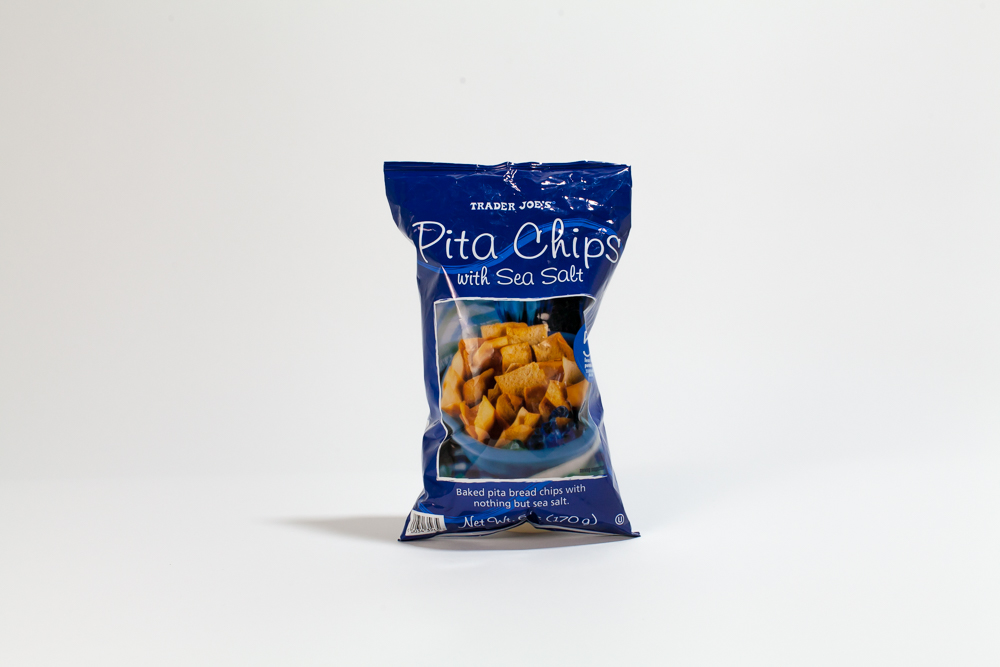 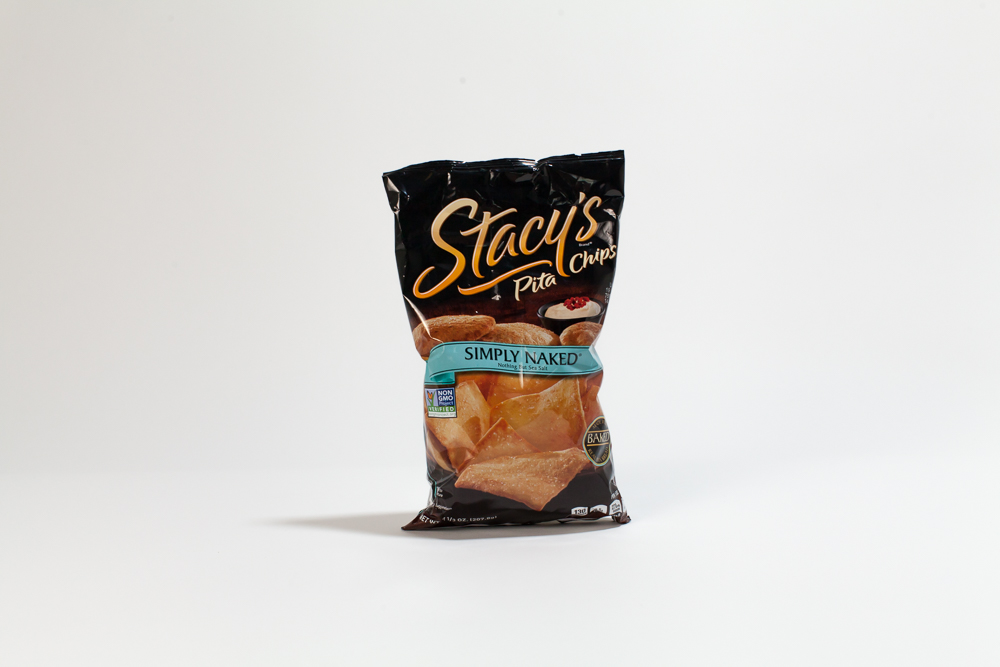 Ingredients in Trader Joe’s pita chips are exactly the same as those in Stacy’s Simply Naked Pita Chips. 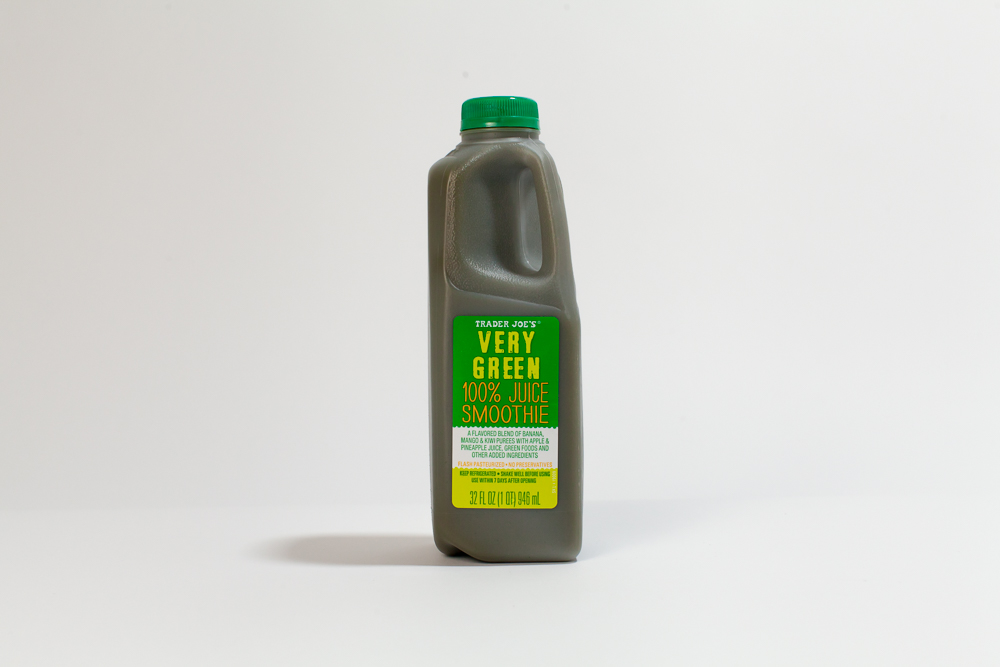 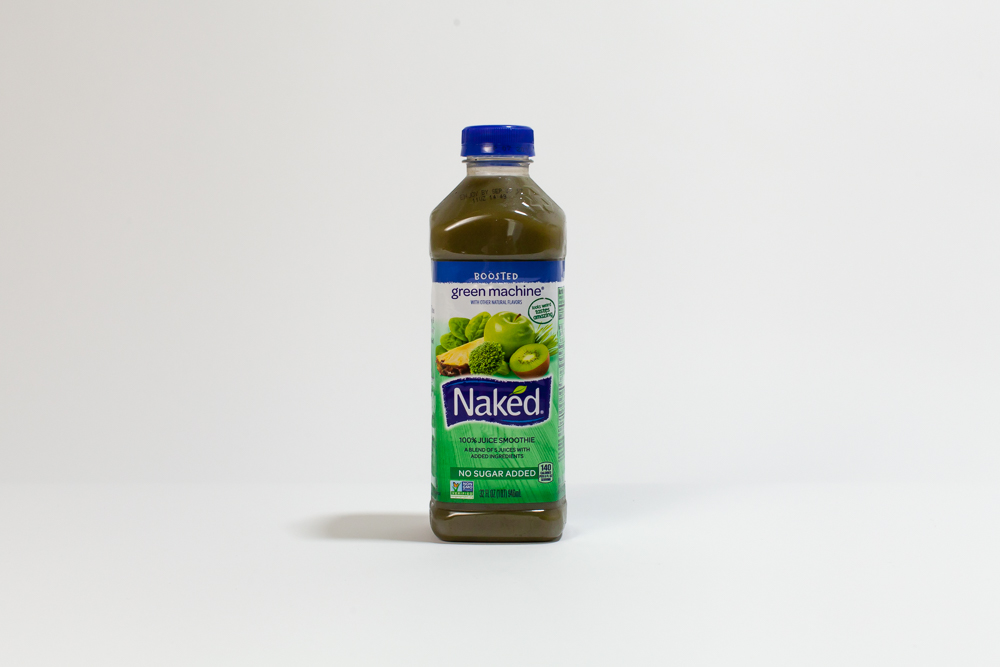 Naked Juice has provided, at least in the past, Trader Joe’s with some of its bottled smoothies. Today, the ingredients in TJ’s Very Green Juice Smoothie are only slightly different than Naked’s Green Machine.

Another approach to unmasking Trader Joe’s true suppliers is by comparing ingredients. The USDA provides a database of products and their nutrition facts; Eater used this tool and web searches to find similarities between Trader Joe’s products in the database and other well-known brands, discovering some ingredient matches.

The ingredients in Stacy’s Simply Naked pita chips, for example, are exactly the same as Trader’s Joe’s sea-salt pita chips. Stacy’s is actually owned by Frito-Lay Inc, another subsidiary of PepsiCo. Likewise, the Mighty Mango beverage from PepsiCo.’s Naked Juice has the exact same ingredients as Trader Joe’s version, while the Naked Juice Green Machine is nearly the same as Trader Joe’s Very Green juice, with less banana puree and no chlorella or kale. 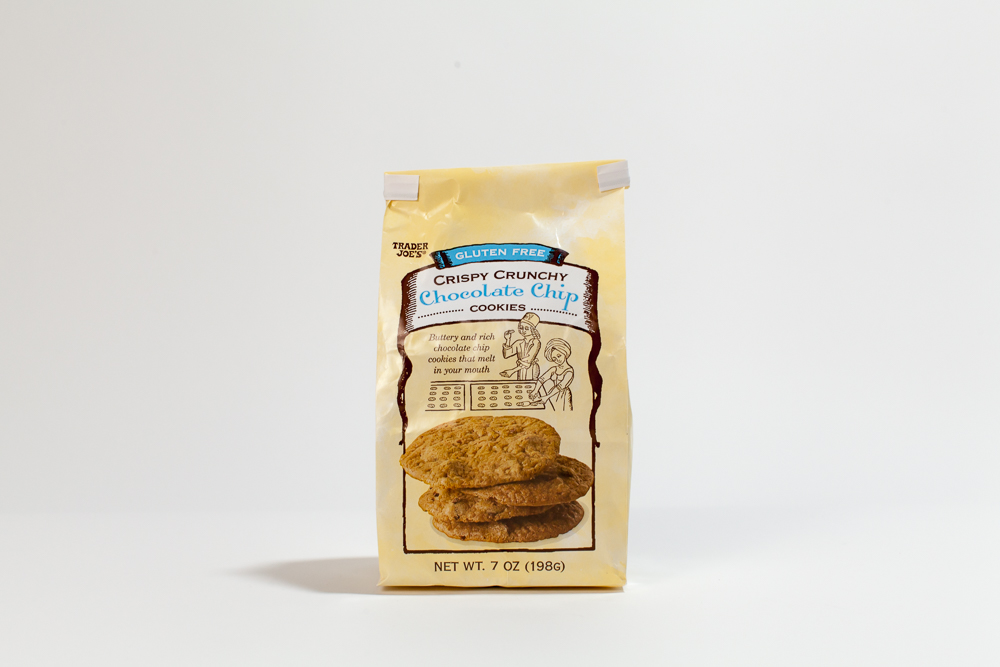 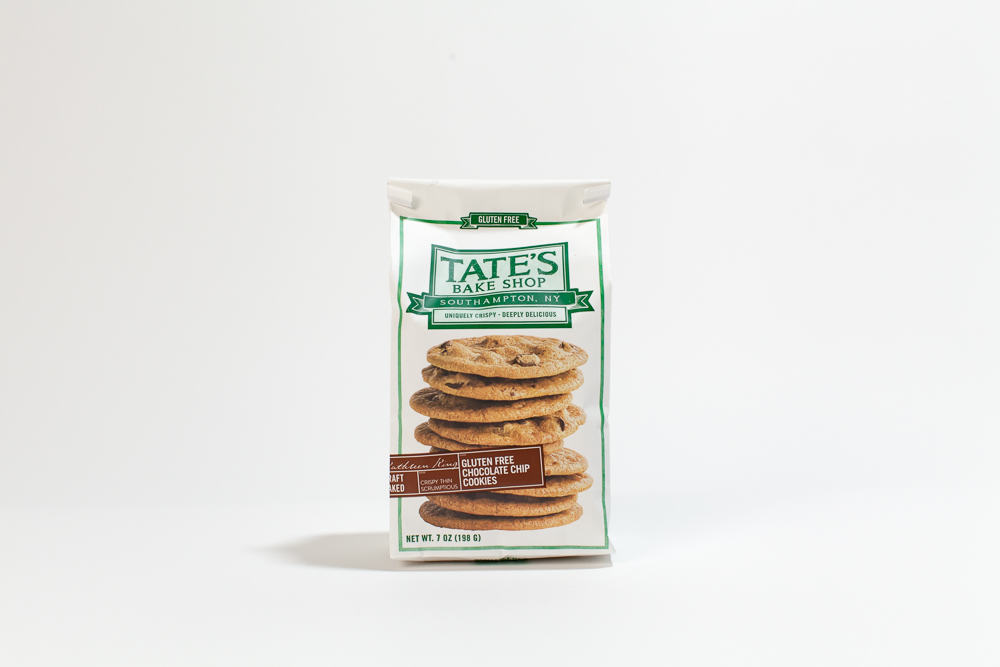 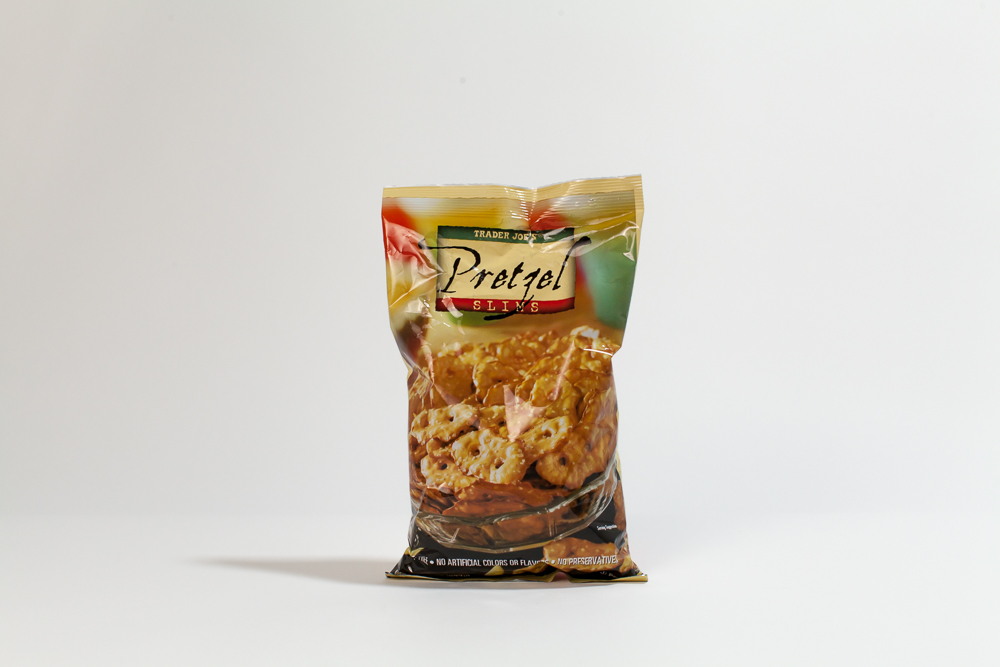 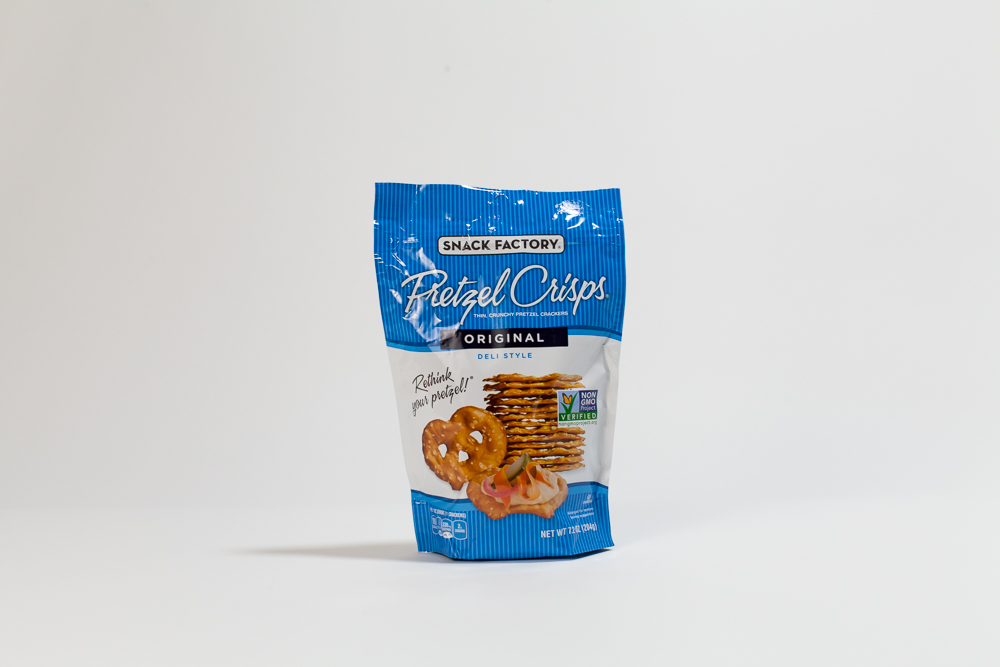 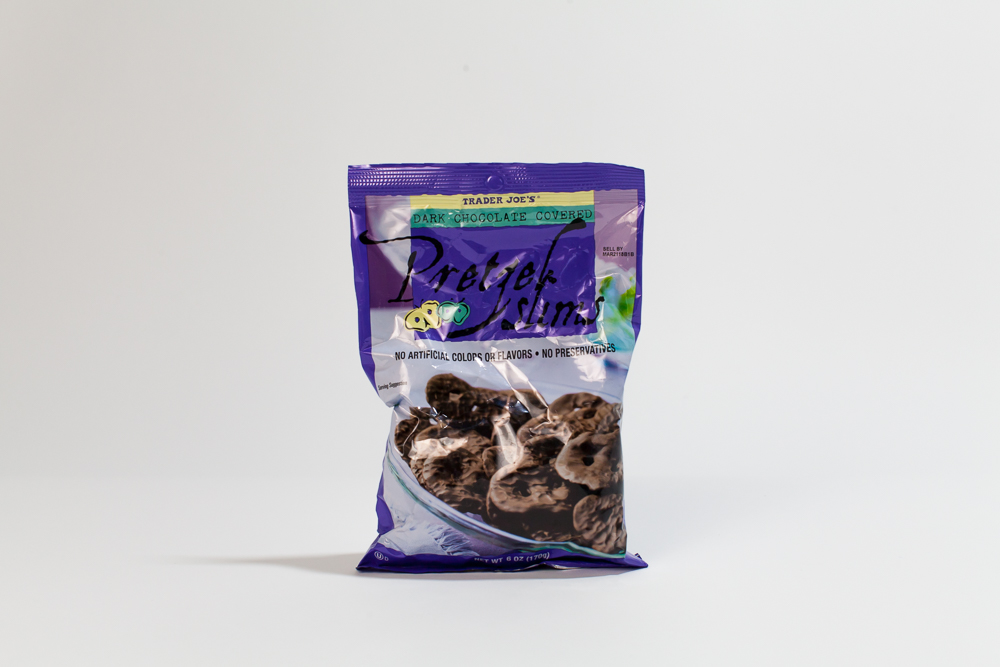 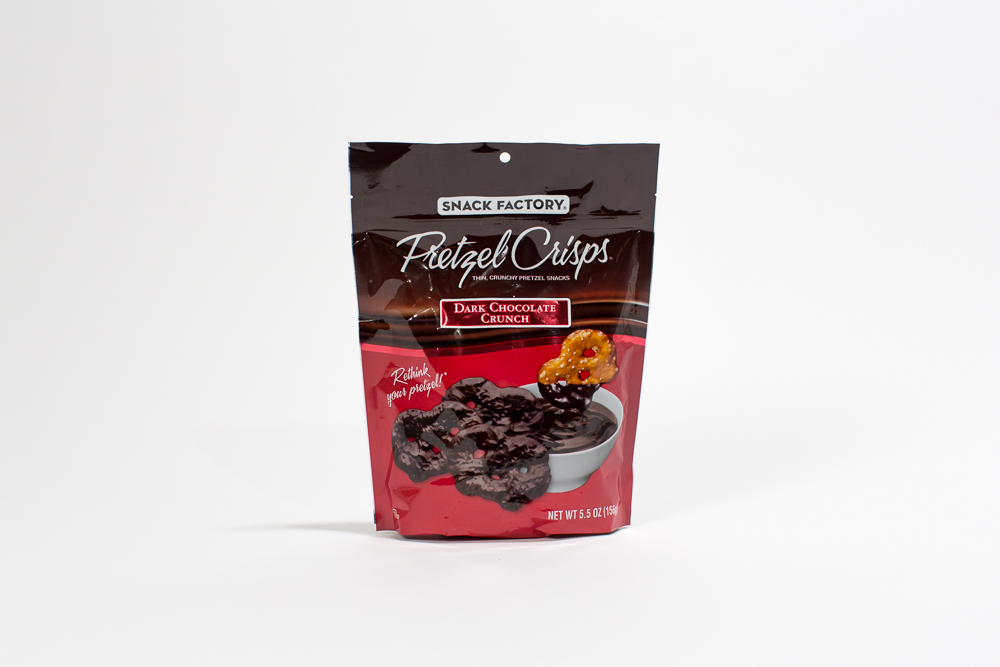 Trader Joe’s declined to confirm any information regarding its suppliers or Eater’s findings, but the similarities show that shoppers who buy name brands from big retailers could save by buying a near-identical, if not the same, product at Trader Joe’s.

For manufacturers, this is the benefit of using private labels, says Doug Baker, the vice president of private brands at the Food Marketing Institute. He notes that companies using store labels are often targeting consumers who care less about brand names and more about health, functional value, experience, or a story. At Trader Joe’s in particular, consumers also pay for a perceived sense of novelty.

“If the consumer wants to buy it, there’s a manufacturer out there that wants to make it, and a retailer that wants to sell it,” Baker says. “That’s been the great thing about this industry and our economy, is we’re always out there looking for a way to meet this demand.”

This is a common practice in retail. Eater also requested recall data mentioning Walmart’s Great Value label and Whole Foods’ 365 label. The results showed that some Great Value bread products were supplied by brands like Sara Lee and Bimbo, while smaller manufacturers have produced Whole Foods’ products. But Trader Joe’s is in a unique position — ahead of the trend — because it has a strong following of shoppers who care about intrinsic value. Gardiner explained that the store emits the image of a neighborhood grocer specializing in organic, healthy, and unique goods, even though Trader Joe’s rarely, if ever, explicitly affirms these things. 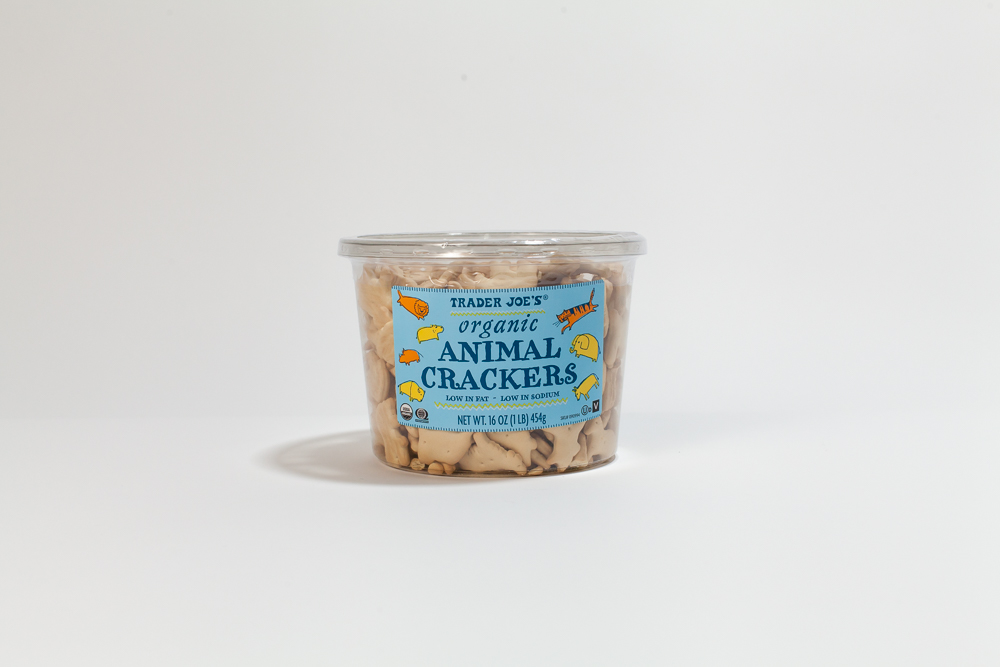 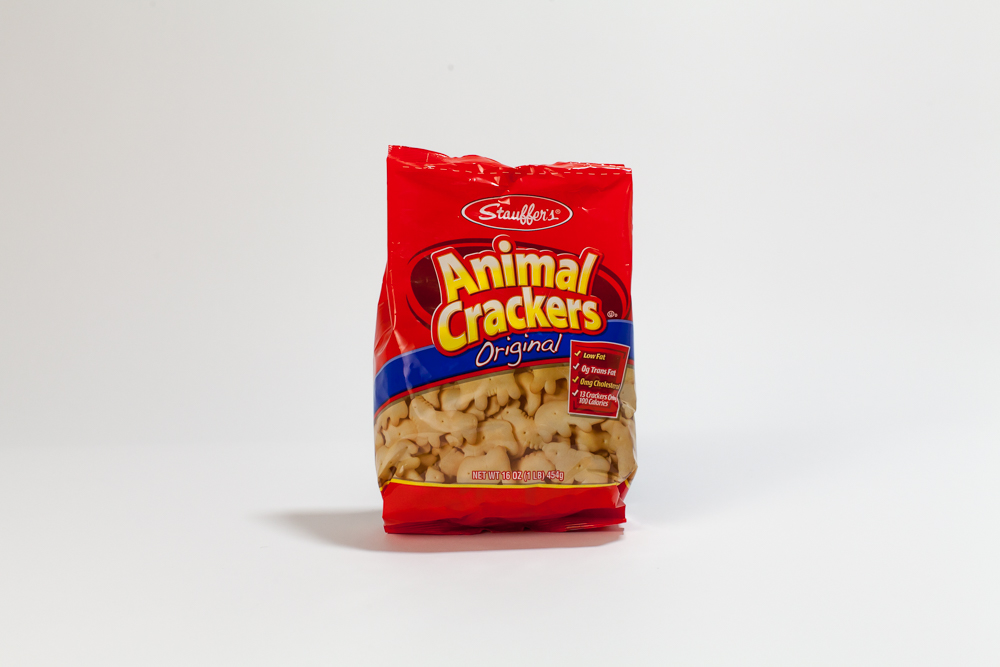 Some ingredients in Trader Joe’s products are very similar to others, but are not perfect matches. This doesn’t mean they don’t come from the same manufacturer. Behind the scenes, the partnership between private labels like Trader Joe’s and their suppliers becomes a give-and-take relationship. Sometimes retailers will work with suppliers to alter and customize an item’s ingredients to better suit their needs. Sometimes suppliers have multiple formulas for one product; they might produce a private-label version using one formula and the brand label with another.

This is something Trader Joe’s takes advantage of to ensure their products feel unique, Gardiner says. It could also be why the company’s version of products are suspiciously similar in packaging, tastes, and ingredients to name brands, barring slight variations in their list of ingredients. Trader Joe’s organic animal crackers, for instance, are nearly identical to the Stauffer’s brand of animal crackers found in major stores, but with the addition of lemon. But Stauffer’s organic version, currently not available through the company’s website, does include lemon, making it identical to Trader Joe’s organic crackers.

But can people actually taste the differences? Eater conducted a taste test of all the Trader Joe’s products we thought were supplied by well-known brands.

Our participants found little to no difference in taste between Trader Joe’s sea-salt pita chips, pretzel chips, and animal crackers compared to the name brands produced by suspected suppliers. On the other hand, our testers thought the juice smoothies, hummus, and pistachios tasted very different. They also noted subtle differences in Trader Joe’s gluten-free chocolate chip cookies (which has more brown sugar than Tate’s) and the chocolate-covered pretzel crisps (even though the pretzels have the exact same ingredients). Overall, though, tasters preferred the Trader Joe’s versions over the brand names.

When it came to price, the animal cracker was the only item more expensive at Trader Joe’s, possibly because it is organic. The cost of the Trader Joe’s products in our analysis were on average about 37 percent cheaper than the name-brand versions, even when isolating the items rated as tasting the same.

Despite the discounts on near-identical brands, Trader Joe’s shoppers are getting an added value, Gardiner and Baker argue. A Trader Joe’s experience is not just about saving money. Similar stores like Aldi (a TJ’s competitor, despite common misconception) have a private-label concept but have not transcended the stigma of “generic” as Trader Joe’s has, nor have they mastered the art of brand deception (or perception).

“People don’t think of this as generic,” Gardiner says. “[They think] ‘it’s Trader Joe’s — that’s the brand,’ and it’s a special brand that you can only get here. The truth is that almost all of this is stuff that you can probably get at another store within a few miles of that Trader Joe’s in a different package with a different name.”

I Can't Stop Looking At