Share All sharing options for: The Radical Sandwich Kings of New Orleans

The chicken-fried steak sandwich at Turkey and the Wolf in New Orleans is not so much a food you eat as it is a shape-shifting beast you wrestle into submission. Two thin slices of white bread can barely contain the torrent of ingredients roaring between them: ripples of pounded New York strip encased in crackly batter, a mound of coleslaw and a ragtag row of dill pickle coins, and slicks of pepper jelly and a spicy mayo dubbed "bird sauce." After you've picked up a half of this monster, it's hard to put it down — for reasons of practicality (it threatens to implode in your hands) as well as pleasure. The sandwich is olympian in its excess, and it yet somehow furthers the notion of balance in the universe: For every creamy bite there is an opposite but equal crunch; despite the deluge of condiments, the vital beefiness never gets swept away.

Chef and co-owner Mason Hereford brings a certain Dr. Frankenstein glee to every dish he makes, though it's the chicken-fried steak sandwich that arguably ranks as his greatest creation. His "bird sauce" riffs on a spicy mayo dip served at a New Orleans fixture called McHardy's Chicken & Fixin' in the Seventh Ward: Hereford's version combines Duke's Mayonnaise, Worcestershire sauce, Tabasco's chipotle pepper sauce, and gochugaru (Korean chile flakes). But the real secret, he told me over the phone, is that when he pulls the battered beef from the fryer, he sprinkles it with chicken seasoning powder which imparts, he says, a "je ne sais quoi" poultry flavor. The effect is so profound that, according to Hereford, some repeat customers have come in asking for the "fried chicken sandwich" they had last time. He doesn't bother to correct them.

Hereford and his business partner, Lauren Holton, opened Turkey and the Wolf this past August, and New Orleanians have taken to the place straight away, welcoming its particular sort of quirkiness to a city that has long thrived on idiosyncrasy. Serving a short menu of magnificently aberrant sandwiches and frequently changing miscellanea (raucous salads, eccentric tacos and tostadas, Americana nibbles), the restaurant sits on an otherwise quiet corner in the Irish Channel. It's a traditionally working-class neighborhood located south of the Lower Garden District, perched along one of the Mississippi River's many serpentine bends through the region. Here, the surrounding buildings sit low and the Louisiana sky looms large. 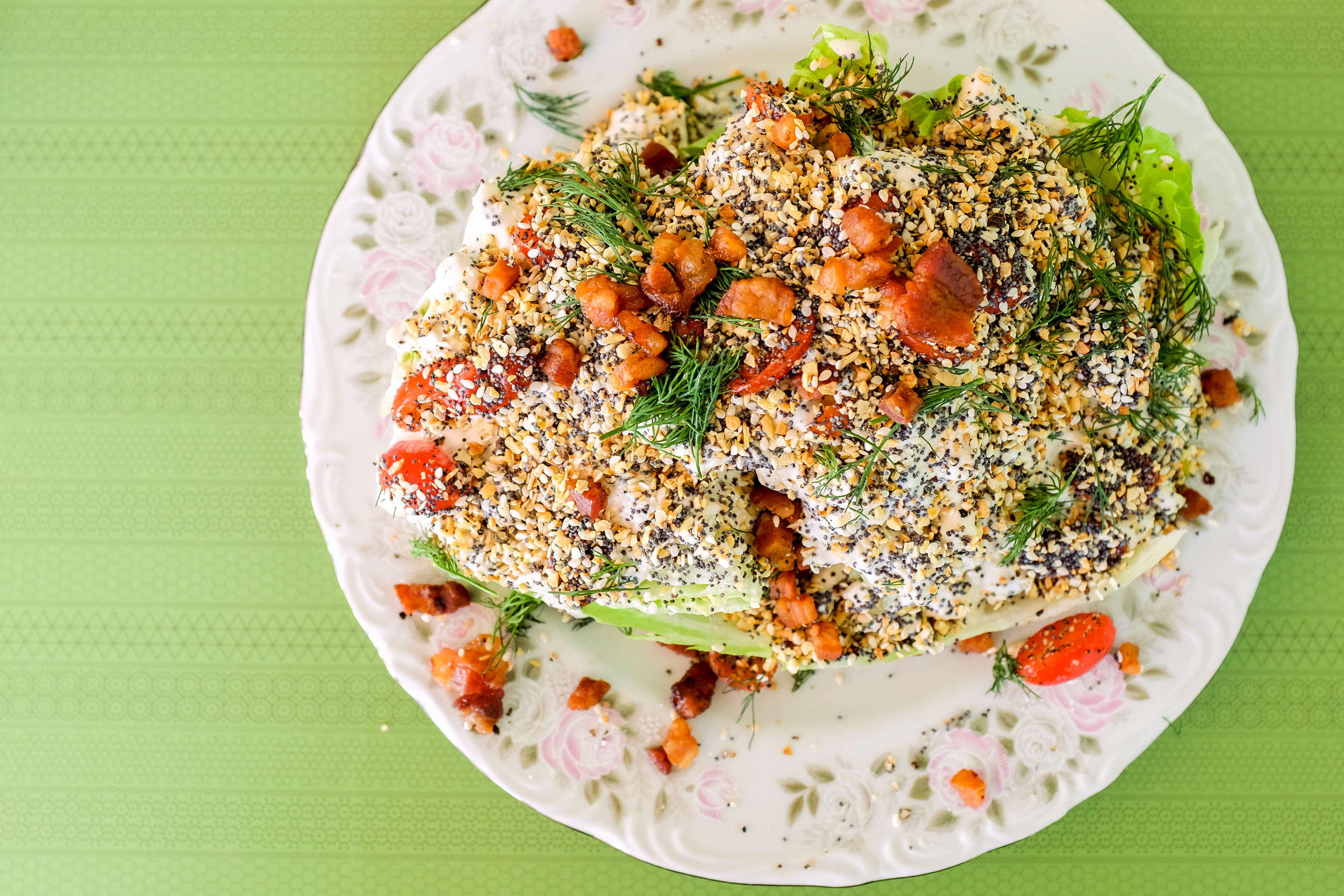 Turkey and the Wolf's iceberg wedge salad, dressed in a flurry of everything-bagel spices

If you're visiting New Orleans and staying in the French Quarter or the Central Business District, as many visitors do, lunch or dinner at Turkey and the Wolf is well worth the 13-minute drive. Holton oversees a playful cocktail program; there's one rum-fueled zinger called "When I was 10 I Went to School as a Dead Cheerleader for Halloween." Every one of my local friends separately referred to Hereford's food menu as "stoner food." When one of his star creations is a fried bologna sandwich crowned with molten American cheese and a handful of potato chips, it's an easy label to concede.

Calling his cooking "stoner food" doesn't quite capture the sly mastery Hereford brings to the kitchen, though. He previously worked as chef de cuisine at nearby Coquette, one of the city's most acclaimed modern fine-dining destinations: It's a place where chef-owners Kristen Essig and Michael Stoltzfus serve smoked catfish dip, green tea-cured cobia with cucumber and crème fraîche, and other well-executed ideas that draw on influences near and far. At his own place, Hereford's dishes may initially read as let's-see-what's-in-the-fridge munchies, but look past their excessive appearance and it's clear they've sprung from skilled hands and a sharp, deliberate mind.

More broadly, part of the instant appeal of Turkey and the Wolf may be how effortlessly the tone of Hereford's cooking slides into the lexicon of casual New Orleans dining. After all, this is a city devoted to the gloriously ungainly sandwich. Muffulettas have been sacrosanct for over a century, when grocers first began piling thinly sliced cured meats (salami, ham, mortadella) and Provolone or similar cheese onto bread as a heart go-to lunch for immigrant Sicilian laborers. Chunky, slippery olive salad is as necessary to the muffuletta as is motor oil to a car engine. And of course there are po' boys, whose origins are murky (their popularity rose during the Depression era) but whose ubiquity is absolute. Variations stuffed with fried oysters and shrimp can be grappled by hand, though I can never tackle a gravy-doused roast beef po' boy at a local shrine like R&O without eventually resorting to knife and fork.

It's on the backs of these classics that the grand edifice of New Orleans sandwich culture stands; on their foundation rests the newer guard — Turkey and the Wolf among them — who are adding their own modern constructs to the genre. Hereford is establishing himself as a next-gen nonconformist, but it's Donald Link, one of New Orleans's towering chef-restaurateurs, who most profoundly shifted the town's sandwich ecosystem when he opened Cochon Butcher in 2009. Link's flagship restaurant, Cochon, largely focuses on the flavors of the chef's Cajun heritage, but Butcher's casual food reflects inspirations near and far. 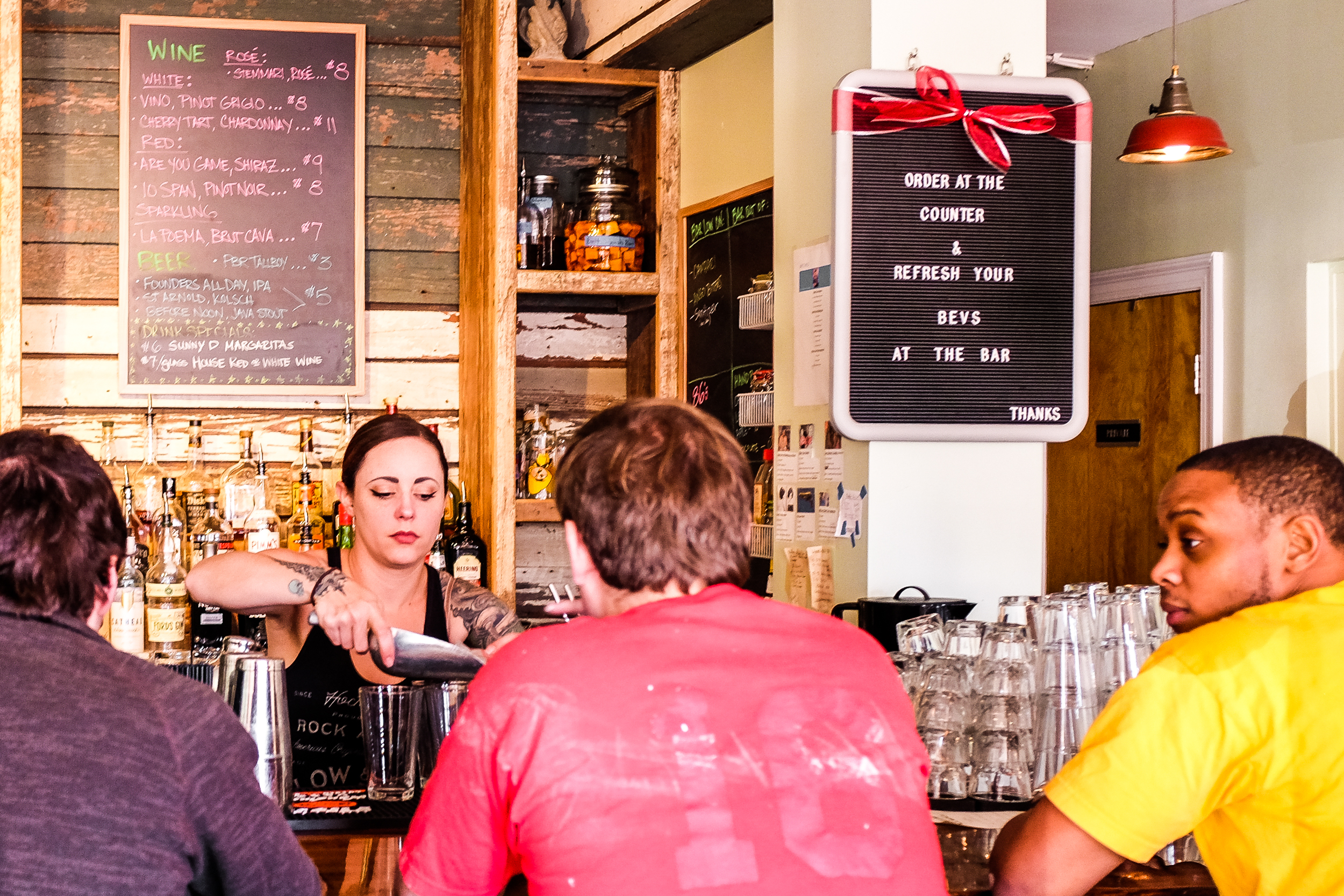 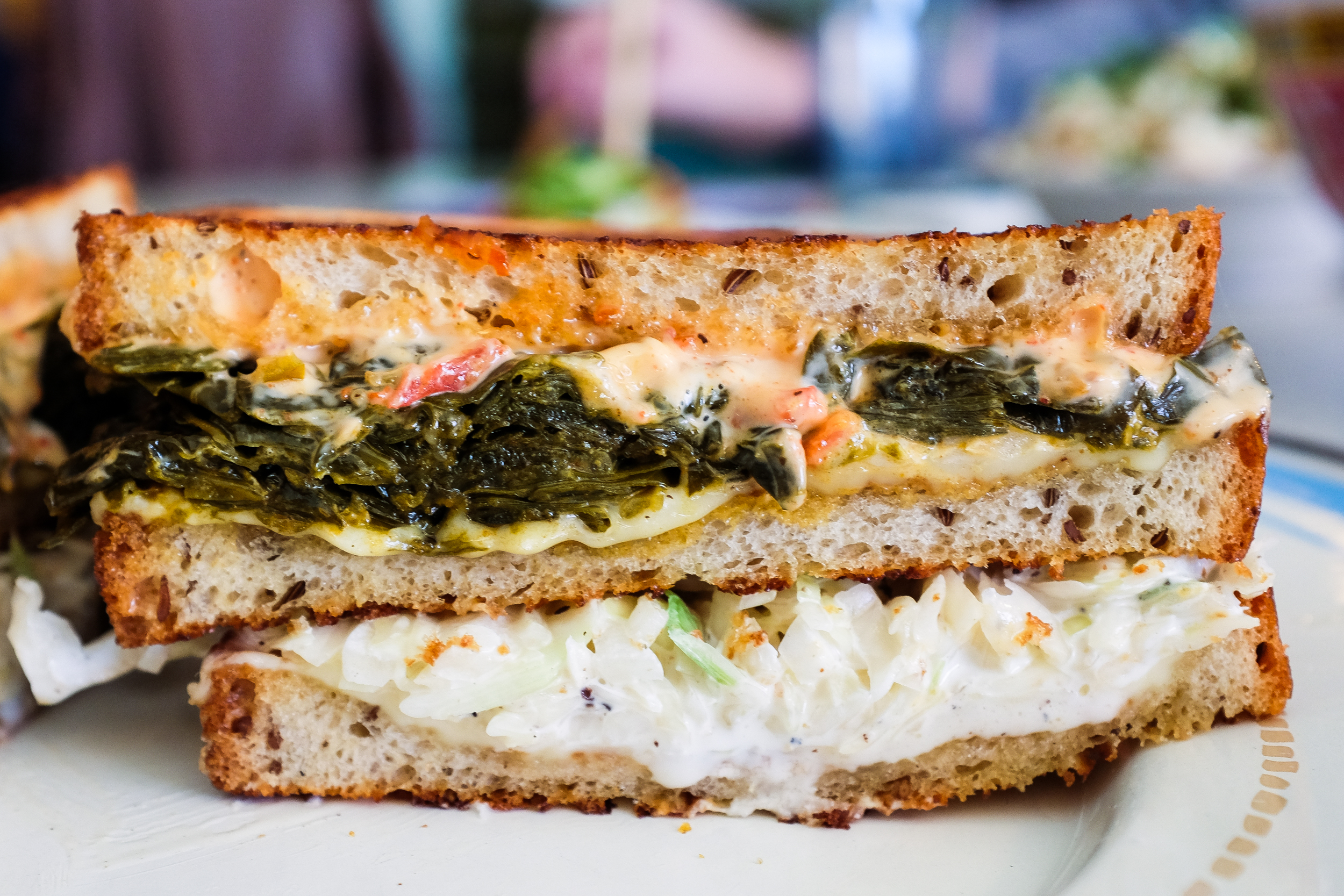 Link's muffuletta, built from house-made charcuterie on a sesame-flecked bun, is a marvel of contrast and nuance. His breakthrough work of genius, though, is the bacon melt — thin layers of chewy-crisp cured pork stacked with stewed collard greens, pepper aioli, and Swiss cheese on buttered toast. It hearkens to the South without referencing Louisiana food culture specifically. You can also find a Cubano, a barbecued pulled pork number, and Moroccan spiced lamb with cucumber and tzatziki on flatbread. Link brings the flavors home again with Butcher's must-have side order: hot boudin, Acadiana's magnificent, funky pork and rice sausage.

Link obviously didn't invent the idea of mixing and matching international flavors and serving them between slices of bread. But in New Orleans, where culinary traditions run deeper than anywhere else in America, I'd argue that the success of Cochon Butcher directly encouraged the imaginations of other local cooks. I think, for example, of Killer PoBoys on Dauphine Street in the French Quarter (opened in 2015), where the eponymous sandwich comes in variations like salmon and cream cheese; chorizo, eggs, avocado, salsa verde, and black beans; or the restaurant's finest innovation, a shrimp po' boy that doubles as a banh mi, dressed with daikon, carrots, cucumber, and Sriracha aioli, an homage to the indelible Vietnamese culinary influences on NOLA's dining landscape.

Turkey and the Wolf locates itself clearly in this sandwich lineage, though Hereford's idiosyncratic creativity carves a distinct niche. So does the cozy quirkiness of the restaurant's physical space, which combines 1950s kitsch (laminated, chrome-line dining tables fill the room) with practical industrial minimalism (painted concrete walls recall the pale chartreuse of elementary school hallways, reclaimed woods comprise the bar). Hereford's brother, William, is a photographer; for the restaurant, he shot beautiful stills of iconic New Orleans dishes. At one meal, I sat under a portrait of the lofty, golden fried shrimp po' boy at legendary Domilise's. The artful gesture frames such standard-bearers as esteemed forebearers rather than business rivals.

Among the restaurant's sandwiches, the chicken-fried steak is the undisputed star, standing tallest literally and figuratively. Hereford told me he's threatening to take it off the menu (he's tired of pounding all that New York strip down to linen-napkin thinness); we'll see how loudly his customers protest. Plenty of other treasures warrant digging deeper into the menu: He makes a collard greens melt that strikes me as a vegetarian response to Link's bacony showpiece; Hereford heaps his take with Swiss cheese and pickled cherry peppers and adds a center slice of bread to separate a layer of coleslaw. I might miss the pork, if I weren't so distracted by every other zigzagging element crammed into this crazy stunner. 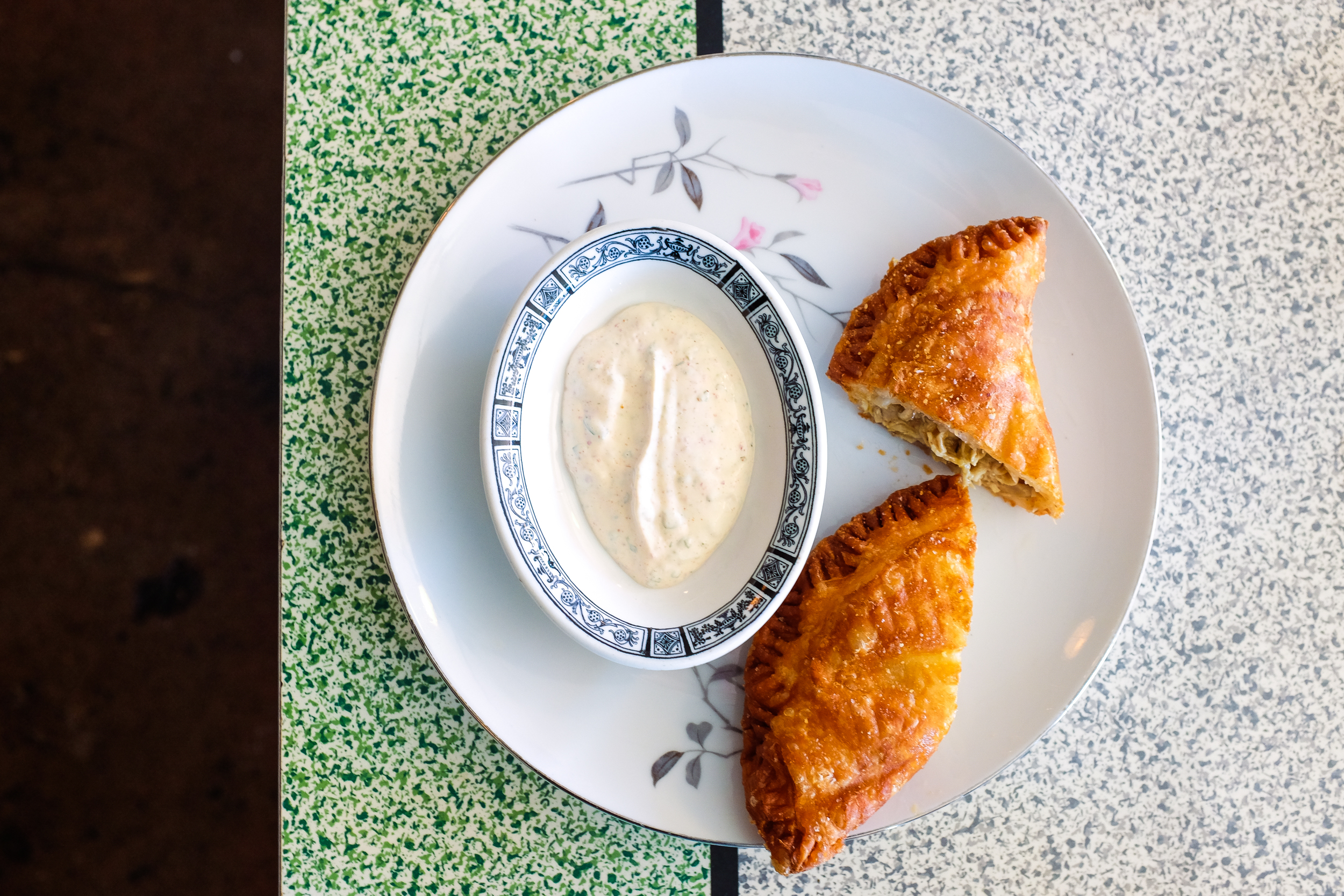 Veer from the trippy Southern-Americana vagaries into a Indian-Middle Eastern mashup territory: a golden griddled roti strewn with long-simmered lamb neck (its texture akin to the tenderest pot roast), lemon yogurt, cucumber, sliced onion, and torn herbs like mint and dill. For the more conservative of palate, there is a sandwich of smoked ham, cranberry sauce, herbed mayo, aged cheddar, and arugula on a long, lithe roll. I admire the campfire perfume of the ham, which Hereford and his crew painstakingly smoke in-house, but compared to the rest of the big personalities on the menu it offers the least interesting magnetism.

Salads, following suit with the sandwiches, are generous and lovably kooky. Shards of pig-ear crackling fleck a garlicky pile of cabbage thrumming with lime and roasted chile vinaigrette, with sunflower seeds adding an earthy echo of crunch. Everything-bagel seasonings (poppy seeds, sesame seeds, and dehydrated garlic) join tomatoes, minced bacon, and blue cheese dressings to pummel a hunk of iceberg lettuce, adding up to a memorable wedge salad. These leafy piles should be shared: Their flavors are almost too intense as a standalone meal.

The most soothing thing to eat at Turkey and the Wolf is a pot pie transformed into a fried hand pie filled with the gentlest stewed chicken and served with a side of buttermilk-tarragon dressing for dipping. The weirdest thing? That would be the "Double Decker Boomtown Freedom Tostada," two fried tortillas adhered by refried red beans and French onion dip and finished with "shrettuce" (Hereford mentioned he's very proud of his shredded lettuce portmanteau), cheese curds, and a triumphant wallop of crushed Doritos. Okay, I get it; pass me the blunt.

Bill Addison is Eater's restaurant editor, roving the country uncovering America’s essential restaurants. Read all his columns in the archive.

Want to keep up with Bill Addison’s cross-country food travels? Sign up for his newsletter for exclusives and outtakes from the road.