Share All sharing options for: Every Single Insane Thing I've Done to Score a Reservation in Tokyo

Like everyone, I watched the documentary Jiro Dreams of Sushi, and wondered what it might be like to taste Jiro Ono’s food at his subterranean restaurant in Tokyo’s Ginza district.

I tried everything to get a reservation. I got Japanese friends to call, but they were repeatedly told the 10-seat restaurant was fully booked. I asked concierges at the city’s top hotels to help, but they needed at least two months notice, and, even then, they couldn’t make any promises. One time I even stopped by the actual restaurant just before the lunch service and made pleading faces — all to no effect. I had written about Japanese food for over a decade; this was getting embarrassing. I decided the only dignified course left open to me was to snub Jiro.

Then, suddenly, a tiny sliver of light appeared — a portal to that (actually quite dowdy) basement in Ginza. A Japanese friend happened to mention that he knew a regular at Jiro’s counter, someone very high up in a well-known Japanese electronics company, and maybe he could try to use that connection to get me a table.

I tried, for almost a full blink of the eye, to affect nonchalance, and then hurled myself at the man’s ankles, refusing to let go until the reservation was confirmed.

Tokyo is full of fiendishly elusive reservations, places whose impenetrability makes getting a table at Eleven Madison Park look like ordering a burger at Wendy’s. Indeed, these days it seems to me that, thanks to the (wholly warranted) acclaim being heaped upon the Japanese capital’s high-end dining scene by leading chefs, the Michelin Guide, and even the United Nations, it is only getting more and more difficult to bag a top table in the city. 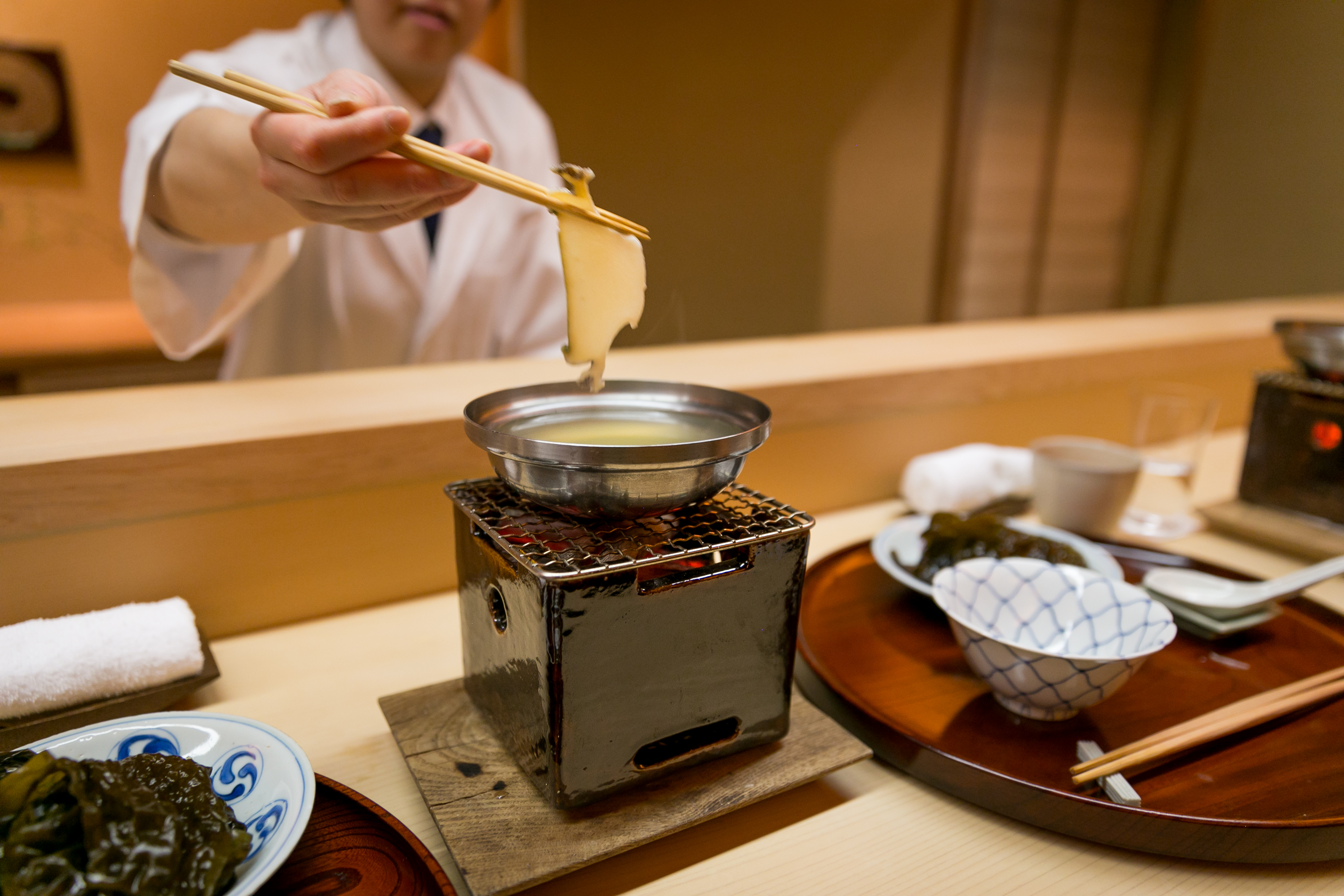 I travel to Tokyo three or four times a year, and fill my trips with eating. I used to head there with a hit list of 20 or so places, and have a decent chance of dining at about 10. These days, I’m lucky if I make it into two.

Obviously, the record number of visitors to Tokyo has put more pressure on the city’s finite number of restaurant seats, but there’s another reason reservations are getting harder to come by: Some restaurants are quietly banning foreign visitors from their reservation books. Those who have gone before, it seems, have screwed the chances for the rest of us, either by failing to show up, or by behaving boorishly during their meals. Other unforgivable transgressions (which all essentially boil down to ignoring Tokyo’s cultural mores) might include professing a litany of allergies, dressing like a holidaying Adam Sandler, not bringing cash (which is still sometimes the only form of payment some of these places accept), or just behaving somehow inappropriately in the eyes of the hosts — blowing your nose at the table will do it.

The same undesirable parade of late, rude, no-show tourists has led several Tokyo restaurants to reject the overtures of the Michelin man. They have enough regular diners not to need the hordes of joyless box-tickers a Michelin star or two tends to attract. As one restaurateur put it to me, quite reasonably: "We have customers who have been coming here for decades, and accommodating them is more important to us than filling every place every night."

And then there are the so-called ichigen-san okotowari ("no first-time/drop-in customers") restaurants. In other words, they do not accept reservations from just any old schmo who rings up out of the blue and offers to pay them money in exchange for food (often, the phone number is impossible to find to begin with). You need to be a regular. But, of course, to become a regular, you need to dine there.

One of the most famous ichigen-san okotowari restaurants is Mibu, an eight-seater members-only restaurant in Ginza that’s beloved by Joel Robuchon and Ferran Adria, both of whom, I’m told, have been reduced to tears by the precision and beauty of chef Hiroshi Ishida’s cooking. Each year, members are invited to choose one night a month on which to dine at Mibu, and they may invite seven guests along — which is how I snuck in the first time.

But even after you have exchanged meishi (business cards) with the chef and consider yourself within the circle of trust, there’s still no guarantee of a table in the future. These types of restaurants are usually really small spaces. They can’t rearrange tables to make room for one or two Johnny-come-latelies. Many, like Matsukawa, my favorite contemporary kaiseki ryōri place, are now not only accepting guests on an introduction-only basis, but, once the introductions are made, you’ve got to reserve your spot three months to the day from when you hope to dine. I don’t know about you, but I barely know what I’m doing tomorrow, let alone in three months’ time.

So, what can a person who wants to eat at an impossible-to-get Tokyo restaurant actually do?

One obvious method is to use a concierge. This is familiar advice, but it’s one of the only reliable avenues for visitors. To get the most prized reservations, you will need to stay at a prime hotel (I hear particularly good things about the concierge at the Ritz-Carlton). But even the most in-the-loop concierge can’t guarantee you’ll be a shoo-in. You will need to make your hotel reservation — and contact the concierge — many months in advance of your visit. You will probably have to give them your credit card details to pass on to the restaurant, a legacy of all those foreign no-shows. And, again, highly sought-after places like Sushi Saito can’t magic an extra cover at the counter, no matter how expensive your hotel room. (If you’re Airbnb-ing it, there are independent concierge services, but they’ll cost you: One recently quoted me "from $87" to make one reservation, which worked out to nearly a 50 percent surcharge on my meal.)

Many Tokyo restaurants also prioritize reservations made by Japanese people, rather than tourists, so one strategy that has worked for me is to make myself a friendly burden on my Japanese acquaintances. If you’re lucky enough to know anyone in town, they just might connect you to a friend who knows a friend who has a coveted connection to the three-Michelin-star contemporary kappō (counter-style restaurant) of your dreams (but don’t forget to bring your friend a massive gift to say thank you).

An example: I heard about a place — far outside Tokyo — which some were calling the greatest restaurant in Japan. The first tip-off came from the billionaire boss of a cartoon company with close links to a certain winsome, mouthless, pink cartoon cat. But, of course, as a non-Japanese tourist, I’d have had a better shot at an invitation to tea with the Emperor. I sprang into action — if you can call sending dozens of DMs and emails "action." I pulled so many strings you could have stuck a pipe in my mouth and called me Geppetto, and in the end I bagged the table via a game of five degrees of separation spanning three cities, culminating in me being personally vouched for by the chef of a restaurant in Nagoya that I had never even heard of.

But what of Jiro? The great man had just turned 90 when I ate at his restaurant, and as per his reputation, he was pretty fearsome, at one point admonishing two diners near me for some unseen transgression. Still, he couldn’t have been more friendly to chat with afterward. In its brevity and atmosphere, the meal was more like a benediction than a lunch, so I would love to be able to report that the sushi was overhyped, an expensive and hard-to-get disappointment. But the truth is, it was the best sushi of my life — by a significant margin. Sometimes, those reservations really are worth selling your soul for.

But far more often, they aren’t. I’m a man obsessed, but high end dining in Tokyo is far from the city’s only pleasure. The best advice I have to offer on this subject is this: Don’t trouble yourself too much about the famous places. Instead, when you get to Tokyo, pick a weekday evening and take a train far from the center of the city in any direction (west is always good) and get off at any random station. It doesn’t really matter which one. Walk away from the station for a couple of minutes, and go into the nearest izakaya.

You probably won’t need a reservation. It’ll be amazing.

Michael Booth is the best selling, award winning author of six works of travel/food non-fiction, including The Almost Nearly Perfect People: Behind the Myth of the Scandinavian Utopia, and his latest, Super Sushi Ramen Express: One Family's Journey Through the Belly of Japan (Picador).