Share All sharing options for: 'Sunshine Sento Sake' Is the Next Best Thing to Being in Tokyo

I live in an apartment in Brooklyn, which means that my bathtub could only support a throat-to-toe deep soak for, say, a hobbit, or Dobby the house-elf. If I want that experience, my best bet is booking a stay in a luxury hotel. And if, after my expensive soak, I need a crisp draft beer and a perfectly salty snack to go with it? The matter grows only more complicated. But sometimes, in the middle of a work day, I want nothing more.

Takayuki Utsumi has it a lot easier than me, at least in that regard. But he lives in Japan. And he's fictional. As the main character of Sunshine Sento-Sake, a Japanese show available on the Amazon Prime streaming video service, he knows exactly how good he's got it. Every 23-minute episode of Sunshine Sento-Sake follows the same format: Each one begins with Utsumi at his job as a salesman, which he clearly isn't very good at; sent out into the field, he makes his way through the neighborhoods of Tokyo, and inevitably gets distracted when he spots a sento, a type of Japanese public bathhouse. After calling the office to say to not expect him back, he hits the baths. Picking a tub, he sinks in until he's up to his neck in the steaming water, leans his head back with a bright grin on his face, and says, "Ah! I feel so guilty!"

Following a soak in one — or many — of the wonderful neck-deep tubs that exist in Japan, he dresses and heads back out into the world, but not to go back to work. He needs a drink and a snack. All of the bathhouses he visits are actual, active businesses, and finding an equally real restaurant nearby is easy. In a given episode, he might visit a British-style pub, a pizza place, a Chinese restaurant, or various izakaya, where he orders a drink — usually a draft beer — and takes a moment to savor the perfect pour and the anticipation of that first long swig. One swallow later, Utsumi explodes into a monologue about the joys of what he's experienced that day, only snapping back to the real world in order to have whatever delicious food item he's ordered to go with his drink.

That's the entire show. There's no drama, no ongoing storyline, no character development, no real conflict other than knowing Utsumi has to go back to work eventually. Utsumi's entire purpose is to embody the spirit of everyday luxury, and nothing else. And it's absolutely sublime.

There's no drama, no ongoing storyline, no character development, no real conflict...And it's absolutely sublime.

Tokyo will be hosting the Olympics in 2020; with a speech Utsumi's boss gives about the importance of showing off the beauty of Japanese culture, Sunshine Sento-Sake may be part of a subtle tourism push in the leadup to the games. It initially aired at midnights on TV Tokyo, but its addition to Amazon's streaming shows brings it to a more international audience than just late-night Japanese viewers, giving them a look at something more than just the stereotypical view of Tokyo and its massive crowds — calm and quiet neighborhoods with a wonderful little restaurant you've never heard of, just around the corner from where you had a nice bath.

Sunshine Sento-Sake is based on a series of illustrated essays written by Masayuki Kusumi and illustrated by Haruki Izumi, which are collected in book form, but unfortunately, not in English. A translation of the intro reads, "Drinks enjoyed while the sun is still up are delicious. The defiance it takes to brazenly enjoy a drink despite having other things one ought to be doing makes it taste simply exquisite. A drink's flavor becomes that much richer with the knowledge that though you've already begun drinking, much of the day yet remains."

Kusumi also has created two similar manga series that were adapted into live-action television, The Solitary Gourmet and Hana's Sloppy Meals, which follow a salesman dining alone at restaurants through Japan, and a housewife making meals-for-one while her husband is away on business, respectively. Clearly, Kusumi has found his creative niche, and it's one that's in demand, as shows that are full of fictional characters profoundly enjoying food from real-world restaurants have been on the rise on Japanese TV in recent years. One show, Ms. Koizumi Loves Ramen, follows a teenager with a passion for visiting noodle shops, and another, Wakakozake, stars a 26-year-old female office worker who visits restaurant after restaurant in the quest to just have a drink and a good meal by herself. Utsumi is just the latest in the trend, but he may be the one having the most fun.

Utsumi finds something to appreciate in every small thing, even things that could otherwise be seen as negative. He never laments that a bathhouse in Shizuoka is run down or that other patrons at the bar he's at are rowdy; instead, he appreciates the old-fashioned and historic feel of the bath, and enjoys that other people around him are also having such a good time. He forgets his day-to-day problems in his joy at seeing old men at the sento complain about their lives and in his appreciation of the perfect crispy crust on his fried liver. 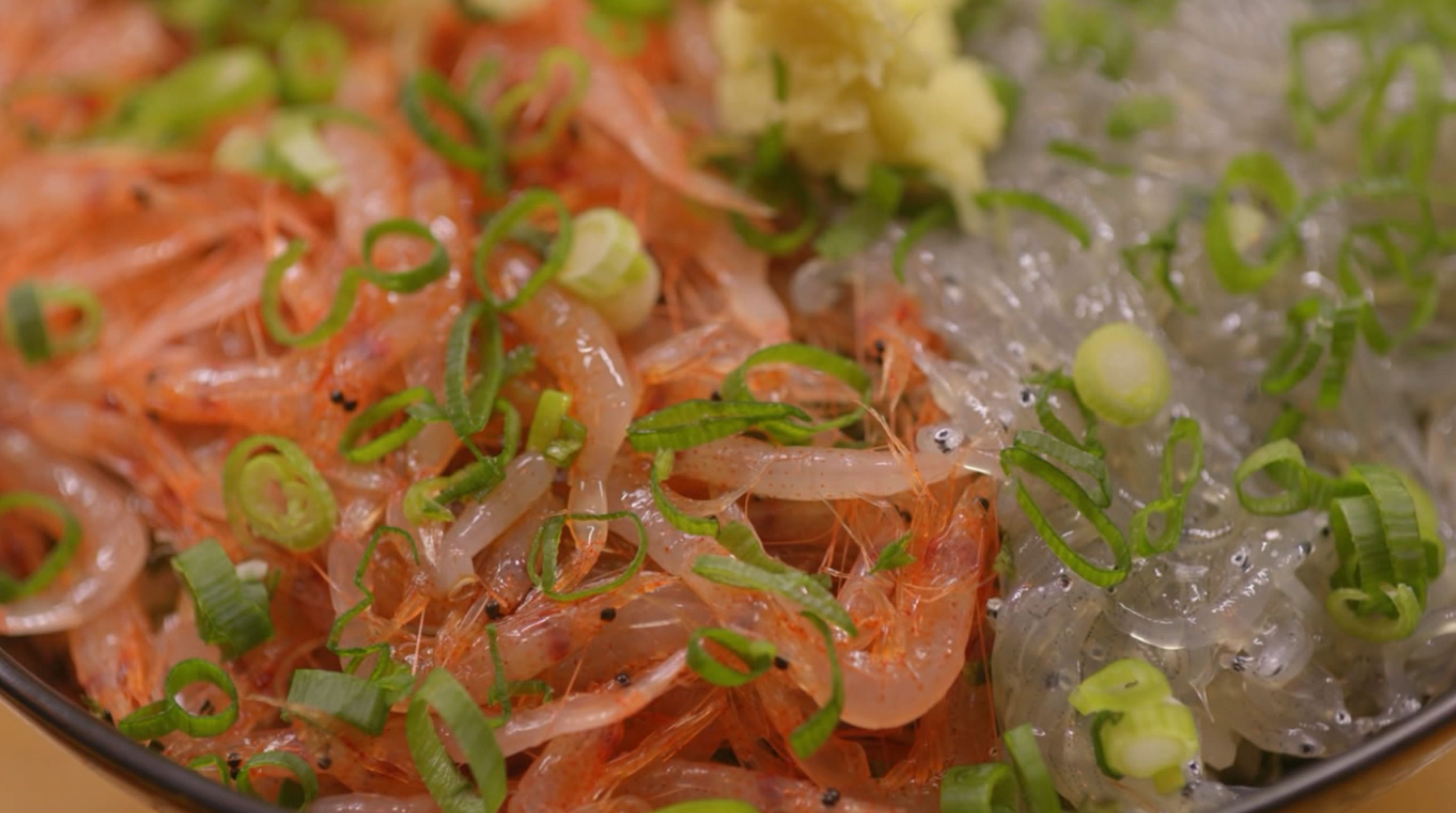 Sunshine Sento-Sake as an entity also knows how to appreciate the fine details, particularly when it comes to the food and drink Utsumi consumes. When he eats a sausage at a pub, you see the glisten of the fat and hear the skin snapping when he bites down; Utsumi asks for hot sauce for his pizza and the camera pulls in tight to show the special chili oil he's given drizzling onto his anchovy slice; and every pour of draft beer is exquisite, the glass tilted at the right angle to form just enough foam, the fizzing audible on the soundtrack. It's tempting to call all of this food porn, but that doesn't seem quite right: It's not just about seeing medical-grade closeups of a beautiful bowl of dozens of tiny pink sakura shrimp, it's about knowing what eating them means to Utsumi.

While Utsumi thrills in his situation, it's intensely moderated luxury: He never gets a second drink or spends an excessive amount of time goofing off, and his little bath-beer excursions cost him no more than $15; the cost of a trip to the sento is set by the government at ¥460, which is around $4, and a single beer and a small meal afterwards don't add up to much more on top of that. And he ends the episode going back to his job, but he's never very downtrodden or harried by it.

What Utsumi encourages is achievable decadence, a perfect small-scale encapsulation of the 'treat yo self' mentality.

That may be where no small part of the real pleasure of Sunshine Sento-Sake lies: What Utsumi encourages is achievable decadence, a perfect small-scale encapsulation of the "treat yo self" mentality. He's a walking, grinning advertisement for the concept of "self-care" — take a little time for yourself, do a little retail therapy (but not too much!), and you could be as refreshed and happy as Utsumi. He's doing something just about anyone could get away with, and in a way that doesn't leave his bank balance depleted.

I felt high temptation to do damage to my bank account watching Sunshine Sento-Sake, in the form of a flight to Japan. While the show is fictional, it's got enough vestiges of a travelogue that it serves perfectly as an advertisement for Japanese tourism. Every sento and restaurant Utsumi visits is a real place — when he discovers a bath, a smooth baritone narrator briefly describes its history and amenities, so if you wanted to experience the tingly pleasures of the electric bath seen in the second episode, you could actually visit the Daikokuyu baths in Yoyogi-Uehara. (A reddit user has even made a convenient map of the locations in the show for the bath-and-snack-eager traveler.)

If you're not Utsumi, with a city full of baths at his disposal — just another American with a tiny tub like me — watching Sunshine Sento-Sake can be almost as satisfying as sinking into hot water, and nearly as refreshing as that first sip of a cold beer. Sunshine Sento-Sake is all about enjoying mini-indulgences in your everyday life, and the show itself feels like one of those little gifts to yourself.

"Ah! I feel so guilty!" is Utsumi's catchphrase, delivered with a huge grin as he sinks into the baths in each episode. Watching Sunshine Sento-Sake is just like this, a guilty pleasure with absolutely no guilt at all.

Whitney Reynolds is a writer and podcaster living in Brooklyn, New York.