The Low-Tech Genius of the Cardboard Pizza Box

How one simple design keeps your precious pizza delivery intact

Share All sharing options for: The Low-Tech Genius of the Cardboard Pizza Box

There comes a time in every weekend when one feels an overwhelming need to order pizza for delivery, and standing in the way is just one technological obstacle. The pizza has to make it from oven to doorstep within the hour — so when you open the box, a warm and delicious wave of pizza-scented air hits you square in the face. Dry crust must remain dry, and cheese, soft and tender.

"Keeping the quality as close to the original quality as possible — that’s an easy thing to do when you’re transporting pasta or Chinese food, but pizza is a little more difficult," said undisputed pizza pundit Scott Wiener, author of design book Viva La Pizza! The Art of the Pizza Box. Humid, crispy, and slick all at once, your high-moisture pizza insists upon dispelling its precious heat; heat always flows spontaneously from a hot to (relatively) cold object. Cheese hardens and sweats grease. And pizzas are unwieldy objects, planar and vulnerable to squishing.

The solution is, of course, to slide the hot pie into a corrugated cardboard box. The pizza box is a balancing act in proportions, which endeavors to retain just the right amount of heat to keep its contents warm and release the right amount of steam to avoid creating a soggy, lifeless crust. The widespread popularity of the corrugated pizza box design is often credited to Domino’s Pizza founder Tom Monaghan.

"Domino’s was getting popular in the late ‘60s, and as they were getting more and more orders, they had to have a stronger box," Wiener said. "Monaghan brought in the corrugated pizza box, which has structure." Monaghan’s box remains popular today, and its humble design is a marvelous reminder that structure is always function.

Today’s most prevalent box is the cardboard "Walker" style, distinguished by its double-paneled front wall. No particular person or company owns this ubiquitous design; according to Wiener’s Viva La Pizza!, this may be an inaccurate credit to Elmer L. Winkler’s 1951 patent for a similar double-panel, folded lock. Click on the graphic below to learn more about its features: 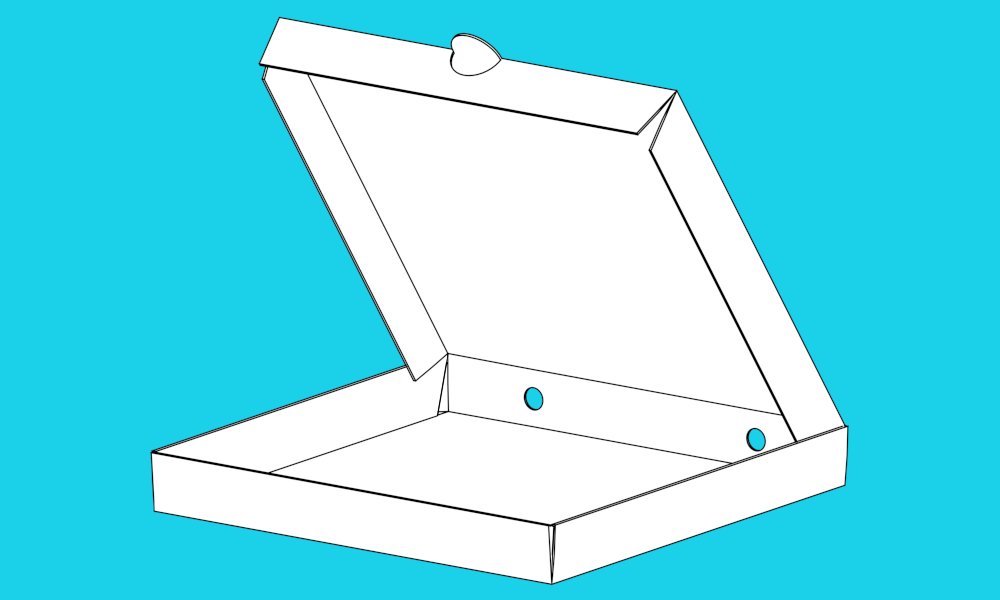 Generally speaking, pizza boxes are constructed from a particular species of cardboard, which has several different names in the paper industry: containerboard, corrugated fiberboard, or combined board. The material is set apart from basic cardboard — think cereal box — because it comes in layers, called walls. Like a house, the extra layers insulate. One wall is two thin sheets of paperboard, glued to either side of a corrugated inner sheet with curves like a lasagna noodle. Single-wall board is sufficient for most pizza boxes, and pizzerias generally pay between 25 and 35 cents for this sort of box.

This containerboard can be folded into that familiar, beloved prism without the additional cost of adhesive, and its rigid nature provides structure that enables box stacking and discourages pizza-squishing.

Each flute in the corrugated medium is a channel for steam to potentially travel through. Unlike Styrofoam, containerboard allows steam to pass, resisting condensation build-up on the box's interior — one sure road to soggy pizza.

All Hail the Pizza Saver, the Tiny Piece of Plastic Protecting Your Pie

Modern pizza box design hasn't changed profoundly since its conception, but that's not to say it's perfect. Like anything else, there's room for improvement. No matter the design, a boxed pizza depreciates with time. But the people's tastes are changing, and design must meet demand. "We got used to fast-food delivery pizza, but now we're seeing Neapolitan pizza, other kinds that are baked in a high-temperature, wood-burning oven," Wiener said. "That type of pizza doesn't do very well in a box. We're finally seeing people try to make a better box."

Are we on the cusp of a new era for pizza box innovation? Past attempts have so far been unable to improve quality while keeping costs down, and thus unable to dramatically change the market. But as technology advances, look for new biomaterials, improved sustainability, sleek aesthetics — the makings of an all-new pizza paradigm.

Lina Tran is a science writer based in Washington, DC. Mark Nerys is an illustrator living in Portland, Oregon.
Editor: Erin DeJesus