How Chefs and Line Cooks Beat the Heat

Share All sharing options for: How Chefs and Line Cooks Beat the Heat

If you can't stand the heat, get out of the kitchen. Unfortunately, that old adage doesn't fly with chefs and line cooks, who are required to work in hot kitchens for extended hours at a time. With temperatures at an excruciating average of 95 degrees across the country this week, many kitchen staffers have developed their own arsenal of tricks to combat the heat.

For Jonathan Insetta, who owns a handful of restaurants in Jacksonville, FL., the heat was never that much of an issue at his French restaurant, Orsay. An old building in the adjacent lot sat empty for years, casting the perfect shadow over Orsay's kitchen. And then it was torn down to make way for a new restaurant. "Once the building was demolished, it stopped blocking the sun our west side, so it's been crazy hot," says Insetta.

Insetta and his fellow chefs and cooks "hydrate like crazy" while they are working the line but, without a proper air cooling system, bottled water can only go so far. "We have had to pay a lot to change our AC system recently and I'm now getting conditioned air in the hood to cool the kitchen down," he says, noting that an air-conditioned hood could become a problem once temps cool. "At one of my old restaurants, we had issues in the winter where the hood was not balanced — it takes a lot longer to cook when the hood is blowing cold air directly on your pan of risotto."

Roland Feldman started his Charleston barbecue restaurant in a food truck, where smoked pork butts and brisket often came with a side of blood, sweat, and tears. "No matter how hot a kitchen gets, nothing compares to working in 95-degree smoky heat in that box," says Feldman. "I've never experienced anything hotter. The only relief was jumping out into the still-hot air outside and trying to catch your breath."

Smoke BBQ is now a brick-and-mortar restaurant sans wheels, but the kitchen still heats up. Before he had all his equipment installed, Feldman was cooking for the masses on several panini presses — utilizing them as grills — by himself, with no line cooks. "The smoke just wouldn't move, so I was basically back there developing a light case of asthma. The day that we got a hood installed probably saved my life."

He cooks on more than panini presses now but, because of an easement issue, Feldman couldn't have natural gas piped into the restaurant. As a result, his kitchen's hood works as a vacuum for any cool air that does come in. "When the door is closed, cold air from the dining room will start piping in to the kitchen." The problem? "Smoke then starts pouring into the dining room."

Unfortunately, an air conditioned kitchen is often considered an expensive luxury, especially in the northern part of the U.S. Michael Rouleau, chef de cuisine of Sbraga in Philadelphia, PA, says he notices a more crowded walk-in refrigerator when it's especially hot outside. "I'll walk in when I actually need something but spend a little extra time in there after," he says. "And I know it's not just me. All of a sudden, all the line cooks are volunteering to clean the walk-in."

Tom Dynan, chef/owner of Unleavened Fresh Kitchen in Dallas says his walk-in benefits from the heat, as well. "In the Texas summer, it is funny how the walk-in is so much cleaner and consistently better organized this time of year, quickly becoming the most coveted job in the restaurant," he jokes. "We also put a chair in the walk-in as a permanent fixture during the summer, and we call it the spa."

"Currently it's 115 degrees in our kitchen," says Scott Schwartz, chef and owner of 29 South, a restaurant housed in a 100-year old building — complete with undersized air conditioner — in Amelia Island, FL. "The boys on the line are usually looking like a stalk of bananas by the end of the shift. Most will lose five to eight pounds of water weight per shift."

Season 52's corporate executive chef Jim Messinger lives in Orlando, where temperatures are currently hovering around 97 degrees. "With Seasons, we have some procedures in place," he says. "Our culture allows team members access to Gatorade or soft drinks." The company also has a policy that bars staff from working on one of Season's wood-fired grills for more than three days in a row.

Ironically, during the filming of a training video to discuss some of those very procedures, Messinger himself felt the effects of heat exhaustion. "We were shooting outside and we actually had to stop the production because everyone was getting so dizzy."

"The problem with restaurants," says Messinger, "is everyone is trying to stay up — they're drinking coffee, or iced coffee, which dehydrates you."

"My cooks will lose five to eight pounds of water weight per shift."

The only way to prevent fainting brought on by heat exhaustion, of course, is to ensure proper hydration. "We'll mix water with lemon juice, sugar, and a pinch of sea salt for electrolytes in a quart container, put a lid on it, stick a straw in it, and drink it throughout service to stay hydrated," says Kelly Ramos, chef de cuisine of The Fat Ham, in Philadelphia.

At Eight Row Flint, in Houston, Tex., tacos and tortillas are prepared on a truck before being served in a converted gas station. Chef Ryan Pera says it gets "brutally hot" — so much so that the plastic on the air conditioner often melts. He estimates that his crew goes through at least a gallon of water a night.

Over in Dallas, Blythe Beck, owner and chef of Pink Magnolia, says the average temperature of her kitchen is 100 degrees. "The line cooks take turns running across the street to Shell to buy every kind of sports drink possible," she says. "I, on the other hand, drink very, very, iced tea in a quart container." She has a couple of house rules, though: "No fainting, no crying, we are cooks. Kitchens are tough."

Step 4: When all else fails, resort to unique measures

There are, of course, some old-school insider tricks. Alvin Cailan, owner of EggSlut in Los Angeles, says he and his team always "store clean damp kitchen towels in the refrigerator." At the forthcoming Fat Ham in King of Prussia, PA, chef Francis Hagan does nearly the same thing: "We'll put a moist towel in the freezer and then wrap it around our necks." 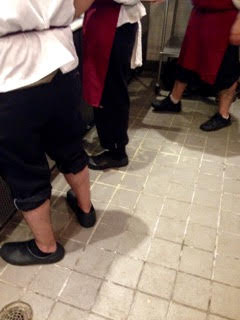 At Coltivare, an Italian restaurant in Houston, Chef Pera and his crew make a fashion statement in an effort to cool off — the pants roll-up, see photo, right.

Then there are the less-talked-about, but just as popular methods. In Los Angeles, Rice Bar's Charles Olalia says his small, street-level restaurant feels the heat all year long. He swears by "breathable clothing, lots of water (at least a gallon of water on a busy day), and cornstarch."

Ah, yes. Many a line cook applies cornstarch (or another, similarly moisture-absorbing powder) to his, er, nether regions, in an effort to absorb sweat in a humid environment. This technique was immortalized by the two main characters in Jon Favreau's hit Chef film. At Underbelly in Houston, chef Chris Shepherd says all his line cooks refer to summertime as "Gold Bond season."

Watch: How much exercise does a food runner get on a shift?