Share All sharing options for: Del Posto Is ​America's​ High Church of Pasta

Review and information for Del Posto

The linguine alla scampi at Del Posto, Manhattan's grand theatre of Italian dining, looks like a version you'd get at one of those New York institutions straight out of The Godfather: ribbons of flat noodles snaring crustaceans in a buttery gloss. From the first twirled forkful, though, it's clear that Mark Ladner, Del Posto's executive chef, has transformed the classic dish from the inside out. He's a watchmaker who disassembled a Timex, and somehow rebuilt it into a Rolex.

Ladner uses langoustines — actual scampi — rather than the shrimp that have become an adaptive standard in this country. He blanches the lanky critters in broth with wine and aromatics, removes them in order to separate out the meat, and then chucks the shells back in the pot to reinforce the stock. Linguine, freshly pulled from boiling water, is tossed in this amped-up liquid, building an echo of briny sweetness between the pasta and the seafood. An emulsion of butter and olive oil varnishes the langoustine tail meat, which register as remarkably supple (but not at all mushy) against the al dente strands. The finishing accents of Calabrian chile flakes and Sorrento lemon from the Amalfi coast may be imported directly from Italy, but the scampi's righteous gusto and its melding with comforting noodles distinctly invoke the big-hearted spirit of Italian-American cooking.

The effect is entirely by design. Del Posto is a restaurant whose name translates to of the place, and the sense of place in question spans continents. The kitchen treats the Italian-American lexicon as one of the great regional cuisines of Italy, presenting lobster Caesar salads and chicken alla scarpariello right alongside Livornese seafood stew and pastas in endlessly varying patterns and extrusions.

No matter the dishes' origins, it's the molecular-level consideration that Ladner lavishes on their recipes that makes eating here, at the country's most opulent Italian tasting-menu restaurant, still a thrillingly relevant experience even eleven years after its opening. 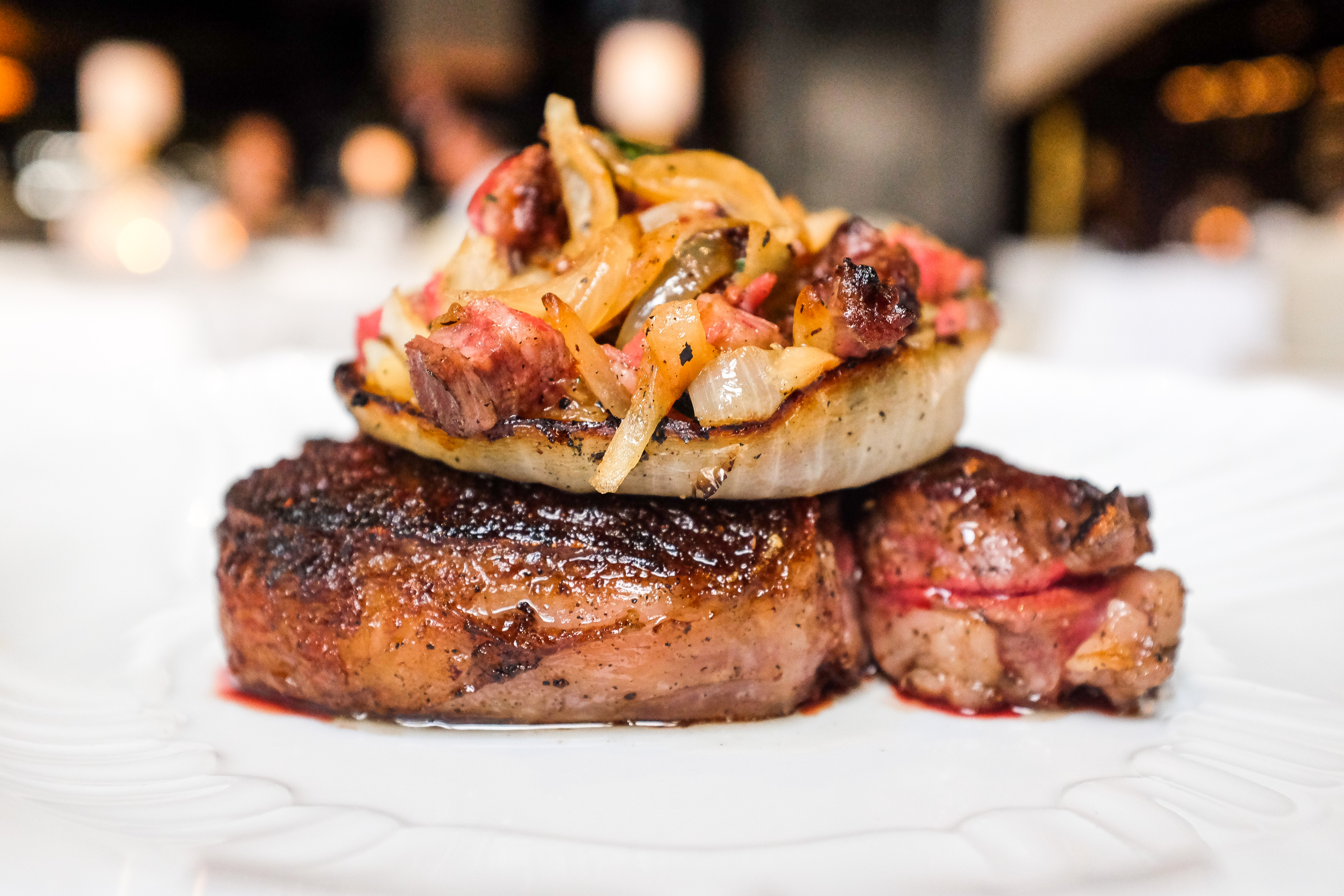 Of course, a mixing of true-minded and transformed Italian dishes fuels the playbook for many of the dozen-plus restaurants run by Del Posto's famed principals: Mario Batali, Joe Bastianich, and Lidia Bastianich. But here, at their most elegant and exorbitant venture, a broadly enticing formula is particularly vital. The 11,000-square foot dining space has scores of seats to fill, as well as ferocious, continually evolving competition from which to set itself apart.

Del Posto opened at the end of 2005 as the pinnacle of Batali and Joe Bastianich's Manhattan restaurant empire, a sweeping, two-story statement in marble and mahogany that culminated the successes they'd had with raucous Babbo, Roman osteria Lupa (where Ladner, a partner in Del Posto, cooked previously), seafood tour de force Esca, and others. After swinging open Del Posto's doors, the pair would go on to expand to Las Vegas and, with Nancy Silverton, launch the wonderful Mozza restaurants in Los Angeles and eventually beyond.

It feels like an ageless oasis, an elegant extrication from the always-rushed dailiness of life.

Earlier this year Batali and Bastianich circled back to New York with the shiny, always-packed La Sirena in the Maritime Hotel a block away from Del Posto. The meal I had recently at La Sirena (barring Michael Laiskonis's exquisite desserts) had a detached quality — indifferently seasoned pastas, an under-dressed salad — that served to highlight how many better, bolder, more exhilarating Italian-American restaurants have opened in New York in the last decade. (Major Food Group's genre benders like Carbone and Santina, and Brooklyn's pizza-and-so-much-more haven Roberta's stand out among many examples.)

Del Posto, undeniably the finest among Batali and Bastianich's New York restaurants, has always differentiated itself through utter luxury. Some of the splendor feels timeless: the starched linens and crystal candle globes; a musician caressing the keys of a grand piano, which sits by a lit staircase that leads to second-floor tables overlooking the dining room like boxes at the opera. To some it comes off as gimmicky; to me, it feels like an ageless oasis, an elegant extrication from the always-rushed dailiness of life. 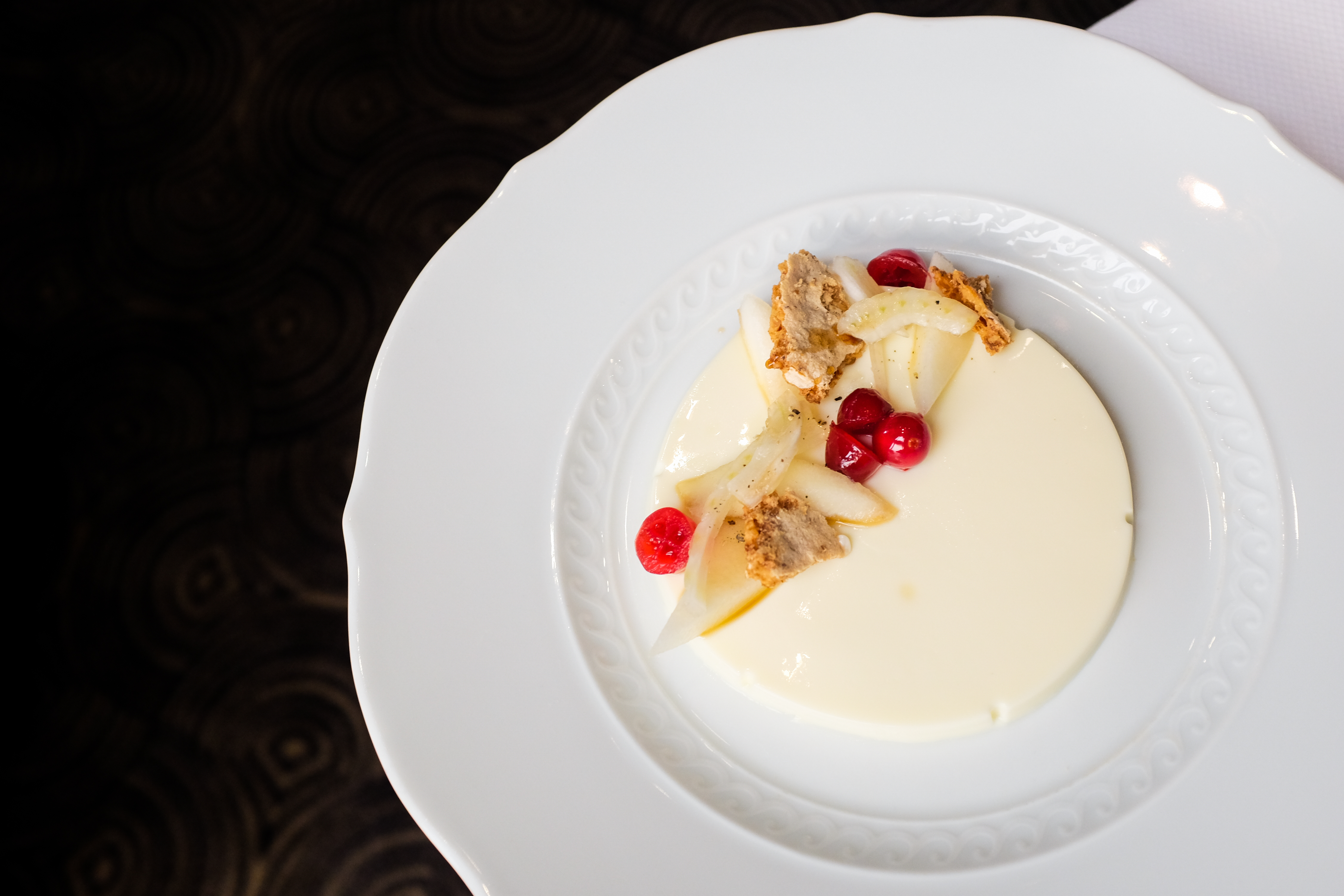 Other extravagances roll subtly with the times. A baguette appears with a sphere of whipped crème fraîche and cultured cream that is burrata's cumulus cousin. Both lunch and dinner at the restaurant begin with a progression of assaggi, or tastings. They include fritters suffused with pecorino and black pepper — cacio e pepe, the dynamic flavor duo of the moment. One bite delivers the combination's umami jolt, and it's really all you need. The showstopper is a small teacup half-full of the most intense, concentrated chicken soup in the galaxy. Ladner and his crew spend three days and use 90 birds in succession, 30 at a time, producing this liquid. It arrives bobbing with a matzo ball-like dumpling made with corn flour, and a sip warms you like the blessings of a thousand grandmothers. It's a nod to the current popularity of Ashkenazi Jewish foods in America's restaurant culture, a testament to the universality of chicken soup, and an opening salvo announcing Ladner's mastery.

Mark Ladner is a watchmaker who disassembled a Timex, and somehow rebuilt it into a Rolex.

Astonishments like that soup also help justify the cost of admission. Dinner comes in two prix fixe formats: $149 for five courses in which diners choose each of their dishes (several options come with $10-$20 upcharges), or $179 for an eight-course tasting menu with choices already set, of which there is also a vegan version. The three-course lunch, formerly heralded as one of the city's great bargains at $29, has slid up to a still-reasonable $49. While individual prices are not listed, everything on the menu can also be ordered a la carte, an especially welcome possibility while sipping a barrel-aged Negroni or a Nebbiolo at the restaurant's sumptuous bar.

However you choose to construct your meal, keep in mind that the pastas will serve as your meal's spiritual anchor, and the simpler the dish sounds, the more stunning it is likely to be. Someone at the table should opt for the agnolotti dal plin, a Del Posto favorite of fluted, rectangular ravioli stuffed with a smooth mix of pork, veal, and mortadella, the dumplings lolling in Parmigiano-Reggiano butter. Even dreamier are bauletti, larger bundles gushing sheep's milk ricotta and sauced in a brilliantly understated black truffle butter. (If you prefer your truffle flavoring more emphatic, start with the carne cruda, Ladner's aged-ribeye version of beef tartare.) I love that the sausage in the classic trio of ear-shaped orecchiette and broccoli rabe is made using lamb neck, an ingenious way to introduce more people to that velvety, under-appreciated cut of meat.

Whichever dishes you try, mingling the regional Italian specialties on the menu with the restaurant's riffs on Italian-American standards, the true "sense of place" represented in Del Posto's food is Ladner's mind itself; every dish has been reassessed and reimagined in some way. His version of vitello tonnato — the tuna sauce over the rosy sliced veal punctuated with a sprinkling of finger lime caviar for a novel acidic pop — might segue to that linguine alla scampi, or a five-cheese manicotti, and then be followed by Abruzzese spiced lamb. Ladner built his lamb stunner around spice blends favored by the Mizrahi Jews who settled centuries ago in Abruzzo, a region in central Italy on the Adriatic Sea, after migrating from the Middle East and up through Sicily, and the dish reflects their route. Dried favas, dried cilantro, and dried garlic infuse both a thick chop and slow roasted neck meat with a heady, pleasantly sharp earthiness, almost like falafel reconceived in the form of flesh.

These highs soar so effortlessly that the restaurant's occasional misses have the same jarring effect as airplane turbulence. The sauce under veal alla Saltimbocca goes through a similarly slow fortifying process as the chicken soup and scampi broth — rich veal scraps and vegetables are added repeatedly to an ever-developing brodo, which is finished with Marsala — but the final effect is oddly flat and salty, with none of the wondrous nuance I'd hoped for. A gorgeously seared rib eye crowned with a charred onion salad came with a side of eggplant alla pizzaiola that turned out to be a tough, hardened puck. A tiny misstep, to be sure, but in this palace of perfectionism, such gaffes stick out.

Del Posto has always differentiated itself through utter luxury; some of the splendor feels timeless.

As do the occasional service blunders. There is the expected whirl of choreographed graciousness — smiles at the coat check and the host stand, chairs pulled out and plates placed in synchronized motions — though the seams may show when a staffer is asked to deviate from the script. At lunch, for example, my tablemate required a spoon. I caught the eye of a food runner, who, rather than asking what we might need, instead turned to our server (both were in a corner under the stairs) and wordlessly nudged him, pointing his forefinger at us. Awkward.

Desserts allayed any modest slips. Brooks Headley, Del Posto's wunderkind pastry chef, left the restaurant last year to run his East Village smash hit Superiority Burger. Justine MacNeil, a protégé of Headley's (she was his sous chef), took over the sweets department and has winningly made it her own, serving desserts more soulful and rustic than her predecessor's.

MacNeil’s pastry kitchen has dispensed with unnecessary frippery, allowing seasonal fruits in particular to trumpet their purity. A panzerotto fritto, a fried hand pie, brimmed with a marmalade of quince, blood orange, and Meyer lemon in ideal, tart-sweet proportions. Red wine and yogurt played off one another in beguiling ways to accent a rhubarb crostata. Panna cotta, scented with a grappa that reminded me of Cognac, landed lightly at the end of a long lunch.

Overkill is often the downfall of desserts in upscale restaurants, but MacNeil’s handiworks beautifully mirror Ladner’s pastas — directly, deeply satisfying, and deceptive in their technical prowess. That ultimately is the truest joy in dining here at Del Posto. Cerebral precision drives the cooking; what arrives in front of you, though, still conveys the emotive essence of Italian cuisine. Warm, flaky pie. Slippery noodles that yield to the teeth with just the right snap. Beyond the elegance and escapism, it’s Ladner’s exacting grasp of heart-and-mind pleasures that presages another decade of triumph for this remarkable restaurant.

Correction: An earlier version of this story mistakenly identified Abruzzo as a city, not a region.

Bill Addison is Eater's restaurant editor, roving the country in search of America's best restaurants. See all his columns in the archive.

Our review of Del Posto