The foreword is by Sarah Michelle Gellar

A big fantasy for '90s kids comes true this week: Freddie Prinze Jr. releases his first cookbook and with it invites the entire world into his kitchen. What culinary expertise does Prinze Jr. — the jock who gave ostracized girls everywhere a new outlook on life in She's All That — possess? Let's find out in Back to the Kitchen. 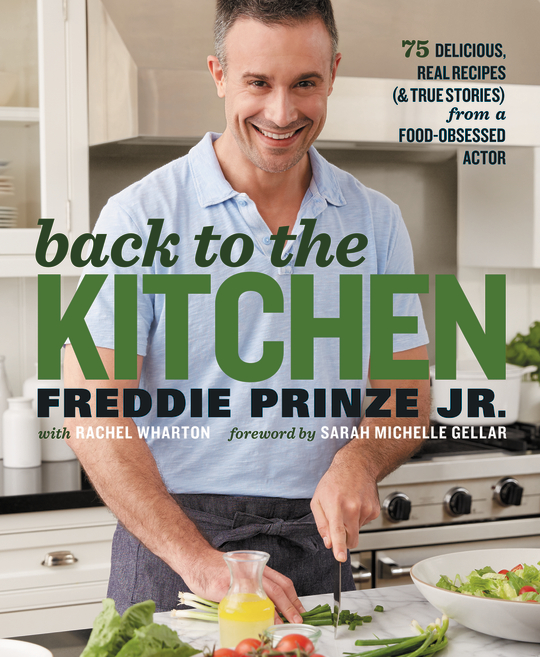 The "food-obsessed actor" sets the record straight right away in his intro: "I didn't learn how to throw a football until I was out of high school, so no chance of playing in the Super Bowl for me [...] My mom said the kitchen was a better place for my brainy-brain, and plus, she wasn't into sports." The book also reveals a lot about Prinze Jr.'s New Mexico upbringing (he once seriously considered pursuing cooking at Le Cordon Bleu).

Bonus: His lifelong sweetheart Sarah Michelle Gellar took a break from scrubbing her face with Proactiv to write the foreword for the book — "In case he forgets to tell you," she writes, "remember his real secret ingredient is love" — a nice tie-in to the heavy emphasis on his family which dominates every recipe he presents in Back to the Kitchen.

Buy the book here to drool over glossy photos of Prinze Jr. seasoning raw meat in all of his middle-aged glory. And here, now, the very best lines from Back to the Kitchen:

On cooking with children: "I find my daughter, Charlotte, tells me everything going on her in her evil-genius mind, but only while we are cooking…Me learn quick-like: Me cook more with my kids."

On muscles and manscaping: "An easy workout drink, which comes with Dr. Freddie P’s scientific tip of the day: Don’t have your shake until AFTER your workout."

On vegetarians: "[Freddie's mother’s] obsession with great food did border on insane at times: I wasn’t allowed to date vegetarians, and if I did, I was too smart to bring them home."

On the art of jiu jitsu: "Chris Sandoval was my best friend in grade school, and I would usually wrestle him for the last carne aside taco. Only-child syndrome and jiu jitsu were my greatest weapons, and so I always won the extra taco…"

On his marriage: "I keep the wife well fed, and if I find something she loves, it’s on like Donkey Kong. (Do people even remember what that is?)"

On his first big culinary break: "The first dish I ever cooked on TV was a sea bass with sugar and lime with Rosie O’Donnell, of all people. I think I was supposed to be selling daytime America a Miramax rom-com, but I liked food more and Rosie enjoyed giving a middle-finger to authority, so it worked out great."

On his tomato soup: "You will swear this soup has cream in it. Nope. Your friends will swear, call you a liar, a vegan destroyer! You are none of these. You’re just awesome. The secret is you puree the vegetables."

On artichokes: "Of course, my wife loves the ONE vegetable that stabs you repeatedly every time you cook it….She’s lucky I dig her so much."

On why food can be so important for families: "This may sound weird, but when I was a kid, all I wanted was a dad I could split a bowl of cereal or a big-time sandwich with [...] Today I get to cook, grill, bake, fry, and most important, eat with my kids. And it feels way better than anything I could have ever imagined."

Insulated cups have emerged as a surprising site of self expression