Filmmaker David Gelb on his vision for the show

Reached by phone (while on set filming the Ivan Orkin episode) Gelb told Eater, "All food shows today have a host. Our show doesn't have a host. People kept telling me that there needed to be a unified host, but I believed that the chefs could tell their own story." To provide a well-rounded glimpse at a persona, Gelb lets supporting characters fill in some of the blanks.

On working with Netflix, Gelb says it was a "natural fit." Netflix picked up Jiro Dreams of Sushi and "had data on Jiro... in some ways it found its audience there." Gelb didn't even consider a cable or traditional television network for this show, saying, "[Netflix was] the only place we pitched it to... they're very daring, they do things differently."

Gelb says his idea for this series preceded Jiro Dreams of Sushi, but that finding "the amazing character" of Jiro and working with a small team to produce that film helped open the right doors. 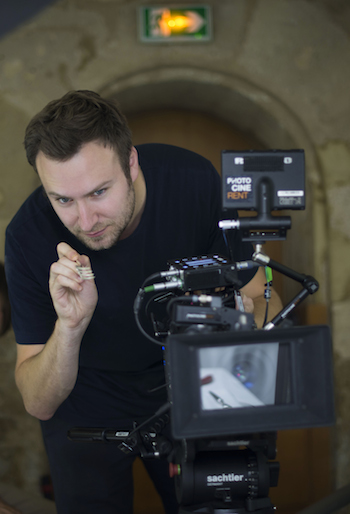 "The idea was to do a series about chefs with a really cinematic quality." As Gelb has said before, the BBC's Planet Earth was his visual inspiration. With one season behind him, Gelb now has a process. "The hardest thing is to choose the chefs... choosing chefs that are at the absolute top of their field, are dynamic story tellers, have interesting stories in their personal lives," he explains. He asks a lot of questions: "What are the epiphanies that made them want to be a chef? How do their cooking and personal lives intersect?"

And then from a practical perspective, do they have the time and will to commit to this shoot? "We shoot two weeks very intensively, and they have to be willing to give us their time. Finally it's about how do we balance the chefs, how do we make it so each story is different, so that the different stories complement each other. While each film can stand alone, together they should form a greater whole."

Gelb says sometimes scheduling conflicts get in the way but ultimately the success of Jiro and the initial run of Chef's Table opened a lot of doors. "We were really proud of what we had done [in the first season], and we got good report cards from the chefs... they all talk to each other," Gelb says. Some chefs reached out to the filmmaker directly, but others were harder to get. "We really wanted to put an emphasis on female chefs for this next run because there aren't enough of them out there," Gelb notes, "We wanted to give them more recognition. We wanted to diversify."

At the same time, there isn't a single Spanish chef on this new list. Gelb explains, "I couldn't just pick one or two, so we started with France." The third season of Chef's Table, composed of four episodes, takes place entirely in France. "It's such an important place in the world for cuisine, so much of where the basis of modern cuisine comes from... We wanted to represent different eras in French history, and so we were lucky to get Passard, Troisgros, the young and ambitious Adeline Grattard, and Alexandre Couillon, who is doing some incredible things way out on an island off the coast."

On how he snagged some of France's biggest names: "Alain Passard is a very private person, and maybe would never have dreamed of doing this, but he enjoyed Jiro Dreams of Sushi, and that was the entry point for him. Michel Troisgros, he's a very busy man, but one of his sons had seen season one of the show and pushed him to do it."

Weeks of research go into preparing for each shoot. "A lot of burden is on the filmmaker," Gelb says. "You can't expect the host to take the audience through it, these chefs are not actors. It's up to the filmmakers to convey their story." Gelb and his team create a general outline and go over it with the chefs, but they are constantly tweaking it, talking about locations and times and the faces of each kitchen, each setting. But because each chef is known by a different audience — due to geography or popularity — each story is very different. Gelb says this is by design: "Some chefs don't have much press at all... we want some of the chefs to be very famous, but in other cases we reveal chefs in ways people may not know."

Gelb and his team have been faced with a rigorous shooting schedule and he says it's not been all glamorous days in sunny kitchens and Michelin-starred tasting menus: "We went into the jungle with Alex Atala, who I believe is actually the most interesting man in the world, but it was really intense, humid, there were insects... and then Atala catches a snake in the middle of the jungle, and cooks it... eating indigenous foods in the middle of the Amazon is not the same as sitting at a table in the dining room of L'Arpege."

A filmmaker's job is to tell a story, and to tell it in such a way that an audience finds it sufficiently compelling that it leads to understanding or discussion or learning or growth. But what does the filmmaker take away from the experience? Gelb says the one thing he's learned over the last several months — and years — of filming is trust. "The biggest revelation for me is it's taught me to trust people. It taught me the importance of building a strong team. Jiro took a year just to edit because, well we couldn't afford to bring on more people to help but also because I was micromanaging everything," Gelb admits. "Watching the chefs working and delegating... some of them have very complex kitchens and they have to train and trust these people," Gelb says, "My big lesson was to build a team of people that you trust and actually trust them and let them do what they do. I can't give enough credit to my team and my editors. It's a very liberating feeling. Nobody makes it on their own."

The second season of Chef's Table premieres on Netflix Friday, May 27. Later this year a mini-season of four episodes focused on chefs in France will be released. In early 2017 the final six episodes from this shot list will air on the network. Below, the full chef lineup:

Eater Video: Here's how Jiro's apprentice is leaving his mark on sushi