President-elect Donald Trump has beaten all challengers in 2016, triumphing over Republicans, Hillary Clinton, the media, and facts. Now he faces his toughest opposition yet: Yelpers. Trump Grill, the Trump Tower restaurant that just might be the worst in America, is seeing its Yelp rating plummet.

The amateur review website regularly becomes a platform for people to protest the statements and actions of business owners. In the case of Trump Grill, it appears Yelp users are posting negative ratings to voice displeasure with the restaurant’s namesake. Though, many of the recent reviews cite problems with food, drink, and service, perhaps in an attempt to feign legitimacy. The timing would suggest they are responding to Trump’s feud with Vanity Fair magazine, which on Wednesday published a scathing review of the restaurant.

Has anyone looked at the really poor numbers of @VanityFair Magazine. Way down, big trouble, dead! Graydon Carter, no talent, will be out!

One Yelper who left a one-star review took direct issue with the restaurant’s taco bowl, which happens to be one of Trump’s favorite holiday treats.

So glad vanity fair said what me and my whole family wanted to say and we should have posted this review 3 months ago. My wife and mother both got terrible cramps right after eating the taco bowl and the steak and green beans looked like food from a run down cafeteria.

Another one-star review was written in language inspired by Trump himself — spelling errors and all.

Aweful food, worst of the worst. Trust me, Im a smart person. I know taco bowls and this one was definetly awful. The 5 star critic reviews? Sore losers, idiots who don't know good food. I know becuase Im like a smart person who doesnt need to read the same review like every day.

One Yelper attempted to be a voice of reason, leaving a three-star review for his fellow critics.

This is not a review of the Restaurant, I did not eat there. This is a review of the reviewers! With very few exceptions, the restaurant got 1 star or 5 stars. That is impossible with honest reviewers unless the restaurant has an impossibly bad split personality! All I can think of is that people went in with a preconceived idea and found something that supported it, or changed it, and they went to the extreme to comment on the restaurant. Trump is extreme, but when commenting on him, or his 'businesses' please don't take on Trump's extreme behavior; be level and just. That will give more weight to your opinion.

When previously criticized, Trump has retreated to Twitter to lambaste his detractors. Will he have the gall to take a swing at Yelpers on social media? It would be a risky move considering the amateur critics make the only online collective large and boisterous enough to match Trump’s legion of Reddit- and 4chan-dwelling supporters.

As of this posting, Trump Grill’s Yelp rating is at two stars based on 171 reviews. That’s down from four stars, according to the Washington Post. Yelp’s support team is currently conducting an “active cleanup,” in which it monitors the Trump Grill profile and removes any reviews that it determines are not actually related to the restaurant. Yelp says this is standard operating procedure when any business has “made waves in the news.” 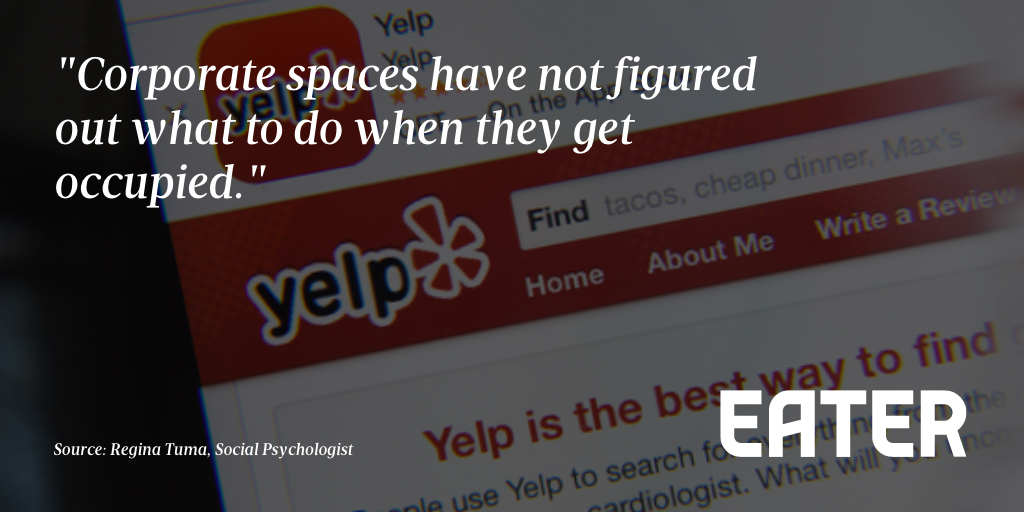 Why Yelp Emerged as a Site for Social Protest

Yelpers are sounding off about more than over-salted food.

• Trump Grill [Yelp]
• Trump Grill’s Star Rating Is Plummeting, and Yelp Is Trying to Save It From the Trolls [WP]
• Donald Trump Eats a Taco Bowl to Prove His Love for Hispanics [E]
• Vanity Fair Says Trump Grill ‘Could Be the Worst Restaurant in America' [E]