What Exactly Is ‘Natural Beef Flavor’?

How "natural flavors" are made, labeled, and lurking in your food.

Share All sharing options for: What Exactly Is ‘Natural Beef Flavor’?

The American flavor industry is expected to earn an estimated $15.1 billion annually by 2020, an unsurprising number given that at this point, almost all processed foods (and many non-processed foods) include flavor additives. But the term "flavor additives" is deliberately vague. Companies are not required to disclose the ingredients of flavor additives if all components are considered generally recognized as safe (GRAS) by the Food and Drug Administration (FDA) — and most manufacturers decline to get into specifics. If you think of flavorings as the proverbial secret sauce, it makes sense: You would be handing competitors the keys to the tasty kingdom.

Food manufacturers get a little help from the FDA in regards to secrecy. On food nutrition labels, companies are legally required to disclose the specifics of all the food's ingredients, except the flavoring — according to the FDA and the food industry, flavors don't qualify as an ingredient. That's why nutrition labels (or fast-food menus) will list 45 impossible-to-pronounce ingredients and then round out with the deceptively simple phrase "natural flavors." Each flavor can include dozens of components, so listing them out is not only not feasible, but would likely just make things more confusing for consumers. Only possible allergens (like milk or nuts) need to be identified.

But what exactly is the ever-ubiquitous "natural flavor"? To investigate, Eater took a look at one flavor additive lurking on many fast-food menus: natural beef flavor.

What is a "natural flavor"?

The definition of "natural flavor" under the FDA's Code of Federal Regulations is as follows: 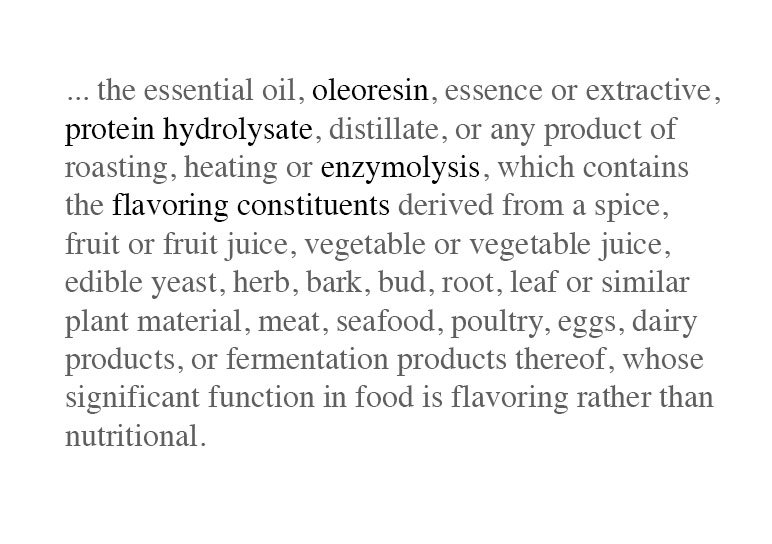 To decipher this definition's scientific words, hover over the image above.

Essentially, it's a flavoring product that has components derived from plant, meat, seafood, or dairy products. That doesn't mean they aren't still a product of science — these flavors are often enhanced and altered in a lab, but, in contrast to artificial flavors, they start with organic rather than synthetic ingredients. The two can contain the same chemicals, they are just arrived at by a different process: whether they were made by an organic chemist or extracted from a product in nature. The sweeping preference for natural flavoring over artificial is not unlike the instinctive fear of GMOs — if it's made in a lab, it must be inferior. Like genetically modified foods, there is no evidence that artificial flavors are bad for you. It's all in the name.

"If we want to put that in ramen noodles or gravy, we can’t be extracting flavor and throwing away the beef — it’s too expensive."

What is "natural beef flavor"?

As Gary Reineccius, a food chemist specializing in flavor research, explains, "natural beef flavoring" isn't necessarily from beef at all. "A long time ago the food industry looked at the price of beef and said, 'If we want to put that in ramen noodles or gravy, we can't be extracting flavor and throwing away the beef — it's too expensive,'" he says. "So they needed to find a way to make the flavors that didn't start with meat products."

According to Reineccius, "the flavor in beef is created during the cooking process. Food scientists identified the amino acids found in beef, added some very common sugars — starch hydrolysate — put it in a pot, added some citric acid to drop the pH, controlled moisture content, and heated it to the same temperature as meat. Then...*poof* we have meat flavor." As a result, that "natural beef flavor" may actually be vegetarian. Once a flavor is broken down into its basic chemical components, scientists can reconstruct it and add one food's flavor to another, creating that umami-like, "meaty" taste without the beef.

All of that food chemistry disappears under the umbrella term "natural flavors." Assuming, that is, that the components really are just for taste. In 1990, the FDA got a little more specific, releasing its list of Ingredients That May Be Designated as Natural Flavors, Natural Flavorings, Flavors, or Flavorings When Used in Meat or Poultry Products. In regards to "natural flavors" appearing in meat products, the FDA decided: 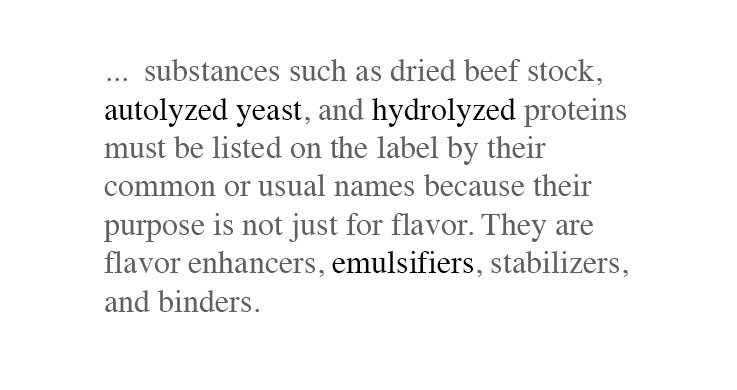 To decipher this definition's scientific words, hover over the image above.

For meat products, the items above are considered ingredients and must be labeled outside the "natural beef flavor" designation; same with items like "beef broth" and "meat extract." (In a famous case of additives-as-ingredients in meat products, Taco Bell's taco meat came under scrutiny back in 2011 when diners noticed a laundry list of additives on its labels.) So, sometimes (on a meat/poultry label) the company needs to tell you whether their product includes beef flavoring. Sometimes they don't, and the "natural flavor" designation is enough: Meat products are not considered an allergen that must be labeled, unlike soy, wheat, and nuts. Unless the company specifies the components on the label, there's no real way of knowing the source of the flavor short of calling headquarters.

What foods have "natural beef flavoring"?

A lot of them, particularly processed foods. If you start paying attention to ingredient labels, you'll see the vague term "natural flavor" popping up a lot. There is no way to know whether this is natural flavor from vegetable, spice, or animal. While the difference may be inconsequential to many eaters, for vegetarians and vegans, this is a significant concern.

The most famous example of hidden beef flavoring is McDonald's french fries. For decades, McDonald's french fries were cooked in a combination of cottonseed oil and beef tallow. This made them delicious, but also laden with saturated fat. In 1990, McDonald's bowed to public pressure and switched to frying its potatoes in pure vegetable oil. But to keep the delicious meat flavor without the cholesterol, McDonald's added beef flavor to its fries — simply listing "natural flavors" on its ingredients list.

In 2001, the corporation was sued over the beef flavoring, with consumers who refrain from eating meat for moral, religious, or health reasons claiming that were misled into thinking the fries were vegetarian. McDonald's beef flavoring is apparently not vegetarian (fine print on the McD's site notes that its natural beef flavoring contains hydrolyzed wheat and hydrolyzed milk as its starters), and the suit settled in 2002. McDonald's has since added a section to its website clarifying that its fries are neither vegetarian nor vegan-certified. But natural beef flavor still stealthily pops up on McDonald's menus: Notably, in its soon-to-be-served-all-day breakfast hash browns.

Is natural beef flavoring bad for you?

The flavor specifically? No. Neither is artificial beef flavoring, while we're at it. In fact, some scientists argue that artificial flavors, which are engineered and rigorously tested in a lab prior to their use in foods, may actually be safer than natural flavors. Whereas a natural flavor can contain hundreds of chemicals that are untested by the FDA, every component that goes into an artificial flavor must be approved for safe consumption.

Unfortunately, the U.S. has adopted terms like "natural" and "organic" as synonyms for healthy, regardless of what food they're applied to. Don't be fooled into thinking those naturally flavored, organic french fries are heart-healthy. Natural beef flavoring may be healthy on its own, but keep in mind what it's sprinkled on.