McDonald’s is testing out new, fancier menu items in Australia.

While McDonald's franchises in the U.S. ready for the expansion of all-day breakfast, Australian customers are getting treated to an upgraded "gourmet breakfast" menu, reports The Daily Mail. 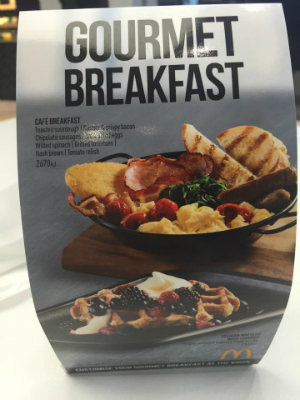 According to Burger Business, the chain launched a limited all-day breakfast trial in the Illawarra region south of Sydney on July 2, that included only six items from the regular breakfast menu. That offering has since spread to restaurants on the Gold Coast. However, the "gourmet breakfast" test happening in the Brisbane suburb of Queensland features completely different options.

This isn't the first time struggling company has tested edgier offerings outside the U.S. In December, the company launched a one-off Australian restaurant prototype called The Corner, which offered craft sodas and tofu vegetable boxes. The fast-food giant is also testing a bicycle-ready packaging prototype in Europe and South America.