The owner of the truck had been receiving threats for a month.

Late last month, PoBoy's & Rich Chic's Cajun Eats — a food truck based in Odessa, Texas, about four hours from El Paso — announced it would give patrons a free sandwich in exchange for a Confederate flag. The notion was simple: Get Confederate flags off the streets. And exchanging the controversial flag for a sandwich sounded a lot more peaceful to owner Rob Jenkins than talk of plans to burn them. Sources suggest Jenkins himself had plans to burn the flags and related memorabilia, but he changed his mind and decided instead to donate the items to a museum. Jenkins remains staunchly in opposition to the South's famous flag. He told a local news station: "To me, it represents prejudice and hatred. It's really hard to argue against that."

The truck went up in flames late Wednesday

But not everyone saw the gesture as a good deed. Jenkins told the New York Daily News that he was bombarded with threats and hate mail. "We were thinking we are going to destroy it in unity with the American flag over it on the Fourth of July... We realized that we were going to lose some customers over this. We were OK [with that]," he said. When he heard that people were threatening to burn his business down he went back to the press. Someone even threatened physical violence against him and his family.

Sadly, not a month after the Fourth of July, when Jenkins' promotion began, PoBoy's & Rich Chic's Cajun Eats has been irreparably burned. The truck went up in flames late yesterday, and Jenkins told the Daily News, "They burnt my business like they said they would. My family is left with nothing." Fortunately, his family was physically unharmed. A local news report notes that officials don't suspect arson despite Jenkins' theory and the suspicious timing of the fire. The fire apparently started after midnight in the engine compartment of the truck and spread into the kitchen area.

A friend and fellow food truck operator, Kimberley Vandiver of the truck Midnight Munchies, started a GoFundMe page for Jenkins and PoBoy's & Rich Chic's Cajun Eats. She wrote, "A fellow colleague and Food Truck owner had tragedy strike this evening when their Food Truck caught fire. Every little bit helps get this company and their wonderful food back on the street." So far, the campaign has raised more than $1,500 of its $10,000 goal. Donations have been pouring in from fans locally and across the country, with some commending Jenkins' "courage," and one donor noting, "When something gets torn down you build it back up stronger than ever." 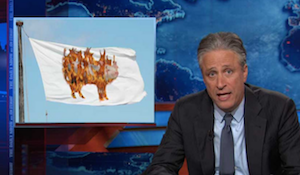 The Confederate flag has been a hot topic in the news this summer. After a horrific shooting in Charleston, S.C. left nine dead, patrons appealed to a restaurant in Nashville to take down artwork depicting the Confederate flag; the owner of the restaurant quickly removed the offensive painting. And around the same time that PoBoy's & Rich Chic's Cajun Eats started their promotion in late June, Jon Stewart went on air to propose Americans replace all Confederate flags with a new emblem celebrating one of this country's greatest achievements: A Barbecue Flag. To be honest, this is still an excellent idea. Let's smoke more meat, not food trucks.

Update: 7/30/15; 3:31 p.m. EST: This post has been updated to reflect new information about the truck fire, its possible cause, and Rob Jenkins' plans for the Confederate flags he has collected.