It includes a greenhouse to grow coffee beans.

by Cynthia Correa Jul 28, 2015, 9:00am EDT
Via Y Combinator Backs An All-In-One, Portable Coffee Stand Called Wheelys To Take on Starbucks [TechCrunch], WHEELYS 3 - Your Own Bike Café for $2,999 [Indiegogo], New Home Coffee Roaster Is Controlled by a Smartphone [E], and All Coffee Coverage [E]

While Starbucks tests order-ahead and delivery features, a new start-up wants to put the whole coffee shop in the bike lane. According to TechCrunch, Wheelys is a new compact cafe contained entirely on a bicycle. The mobile cafe comes complete with three built-in burners, an electrical engine, running water, and loudspeakers.

The current model of the full-service cafe is listed for $2,999, but there is an existing Indiegogo campaign for a newer version. The updated model comes with an integrated app, two Android pads, and a mobile greenhouse to grow coffee beans.

The biggest selling point? Like a food truck — but with even lower overhead — anyone can put a Wheely on the road and start their dream coffee business immediately. One caveat: Wheely's requires its vendors to sell only fair-trade and organic coffee and use the company's preferred pour-over brewing method. 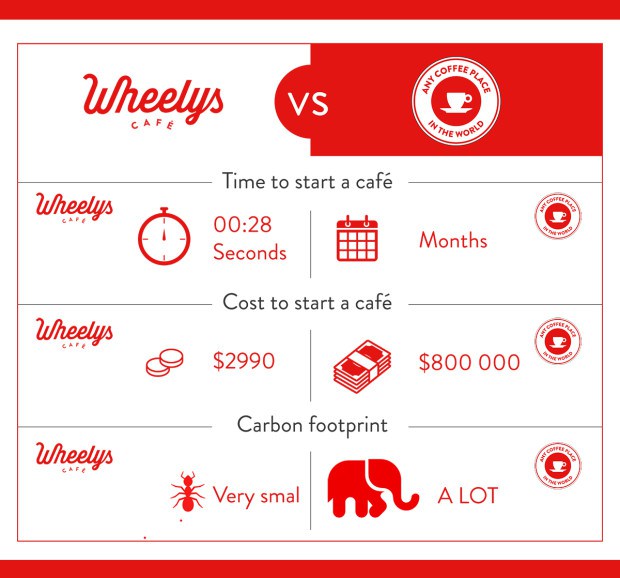 In addition to caffeinated beverages, the portable coffee shop has room for soft drinks, fruit, juice, muffins, and candy bars. Co-founder Tomas Mazetti on the project's environmental consciousness: "We're powered only by the sun and your own body. We started it as an experiment to see how environmentally-friendly you could make a business. It has a zero carbon footprint."

Socially-conscious creations are making strides in an industry which is often criticized for its negative impact on the planet and its workers. In Singapore, Chow's Droops Coffee Maker has uses a coffee pod that is coated in sugar, rather than plastic, and dissolves once hit by hot water. Today, Wheelys are rolling around in about 10 cities in Europe. Could the company one day come to the U.S.?