Why You Should Know the Name Roger Vergé

Share All sharing options for: Why You Should Know the Name Roger Vergé

The news broke late Friday: chef Roger Vergé died. For culinary historians and many chefs, it was a time to remember Vergé's impact and legacy. But for a lot of food-lovers today, it was a head scratcher: Who was Roger Vergé?

Chef Roger Vergé created and popularized a style of cooking that revolutionized French gastronomy, and informed the way chefs began to approach food and fine dining into the 21st century until today.

As a teenager, after stints at Michelin-starred restaurants like Tour d'Argent and Plaza Athénée, Vergé left France to work in Africa. Perhaps his time in Morocco, Algeria, and Kenya helped inspire one of French cuisine's major milestones: the proliferation and mass marketing of what became known as nouvelle cuisine in the 1960s. Prior to that decade, French cuisine (cuisine classique) was defined by its use of animal fat — think: butter, cream, lard. For the first time in France's gastronomic history, lighter fare was elevated and celebrated. Along with Paul Bocuse, Gaston Lenôtre, Alain Chapel, brothers Jean and Pierre Troisgros, Michel Guérard, and Raymond Oliver, Vergé's cooking would come to define a decade — and many decades that followed — in French cuisine.

Vergé's particular brand of nouvelle cuisine came to be called cuisine du soleil, or cuisine of the sun. Restaurants around the world are named Cuisine du Soleil in his honor, and the concept of cuisine of the sun — essentially Mediterranean fare enhanced with vegetable essences and fruit reductions — is largely attributed to his life's work. In Food & Culture: A Reader, editors Carole Counihan and Penny Van Esterik note that California cuisine traces its origins to nouvelle cuisine, though Alice Waters' brand of Cali-cooking was enhanced also by its social consciousness.

So yes, that smear of parsnip mash, that kale foam, and even that lobster macaroni and cheese — it can all be traced back to Vergé and his contemporaries.

In 1969, Vergé opened Moulin de Mougins in the South of France. By 1974, the restaurant he ran with his wife Denise had won three Michelin stars — it remains one of the fastest ascents to the Michelin three star club ever. A subsequent restaurant, L'Amandier de Mougins, earned another two stars. In the mid-1970s, Vergé held the most number of Michelin stars of any single chef in France. It was around this time, too, that he became a bit of a media darling.

What did I learn with Vergé? Better to ask, What didn't I learn? Every one of my cooking skills was honed. I took the first baby steps as a manager, running the garde-manger (cold appetizers and soup) station and the braising station. I can still smell and taste his lamb shoulder that I made so many times. It was braised slowly overnight in a casserole sealed with bread dough so that not a waft of aroma or flavor escaped. It was rich in Provençal herbs fresh picked from Vergé's garden: rosemary, basil, thyme, bay leaf. To this he added a Middle Eastern accent with star anise, fennel, cinnamon and orange peel... it was at the braising station where we did the initial prep for Vergé's sauces, which were the anchor of his cuisine.

Boulud, who went on to become a sous chef for Vergé, credits the chef with teaching him how to manage — both in how to organize the flow of work in a kitchen, as well as how to manage employees and the expectations of clientele. 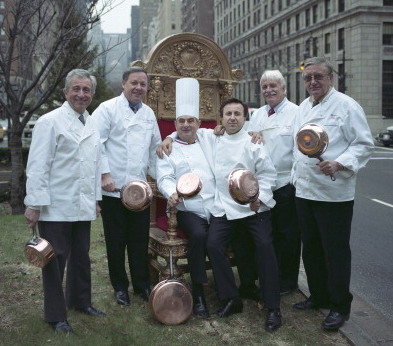 In the mid-1990s, when Boulud came to the U.S., his former mentors — including Vergé — came to New York City to cheer him on. Vergé was one of few chefs of that era who saw that sharing his skill set would benefit the cooking world as a whole. Many French chefs of the day were famously reluctant to divulge recipes or techniques. Ultimately, this wound up limiting their reach. Vergé once said [translated], "The more knowledge we share, the more the cuisine is enriched; we succeed if we make what we love popular." Vergé was known for his charisma. In 1991 he charmed one Ms. Ruth Reichl, who was then at the Los Angeles Times.

So many chefs practicing today passed through Vergé's sunny kitchens, including David Bouley, Alain Ducasse, Hubert Keller, Jacques Maximin, Lucia Pavin (credited with bringing nouvelle cuisine to Italy in the 1970s), and Patrick Ponsaty (now corporate chef at Bellamy's in Escondido, Cali. and consulting chef at Café Madeleine in San Diego). The family tree of Vergé's influence branches out in hundreds of directions.

Vergé opened or consulted on many restaurants over the course of the next three decades, and wrote dozens cookbooks in French and in English. In many ways, his recipes continue to inform the lexicon of Western cooking. He retired from Moulin de Mougins in 2003; the inn and restaurant remain in operation today.