61-year-old Walter Scheib had been missing for a week.

Walter Scheib, a chef who served in the White House kitchen between 1994 and 2005 was found dead in the New Mexico mountains this weekend. He was 61.

Scheib had been missing for over a week. He was last seen about to embark upon a hike solo through the Sangre de Cristo Mountains, according to the Washington Post.

Authorities have not released a cause of death, according to NPR. Scheib was discovered just off a trail in Taos, N.M. (about 70 miles North of Santa Fe) last night. It is unclear if a fall or injury contributed to the cause of death. 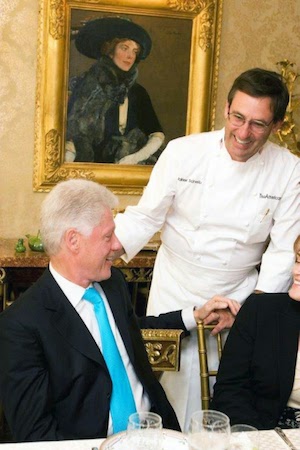 Originally from Oakland, Calif., Scheib studied at the Culinary Institute of America in Hyde Park, N.Y. after college. By the early 1990s, Scheib was hired by the White House. In 1994, then First Lady Hillary Clinton promoted him to Executive Chef. Clinton appreciated his attention to American ingredients; many former White House chefs were expected to cook in the French style. He lasted through the Clinton reign and into the Bush era, but after 11 years First Lady Laura Bush asked him to resign.

In 2007, he published a cookbook and memoir of his time at the White House titled White House Chef: Eleven Years, Two Presidents, One Kitchen. Here he is on The Daily Show in 2007, promoting his book, and noting that then President Bush called him "Cookie."