Get Ready for McDonald's Filters in Snapchat

The burger behemoth is coming for you, kids.

Share All sharing options for: Get Ready for McDonald's Filters in Snapchat

McDonald's is going where the kids are: Snapchat. Amid the worst sales slump in a decade and the closure of hundreds of units, the burger behemoth needs to win back favor among that ever elusive demographic, snake people millennials, in order to stay afloat. Attempt number 982? Snapchat, the mobile app that allows users to post videos and pictures that self destruct after several moments. According to CNN Money, it's Snapchat's first foray into branded, location-based filters.

Snapchat's motivation is simple: Branded filters are another way it can make money, and location-based filters allow Snapchat to use data from its millions of users in a way that benefits advertisers. McDonald's motivation is similarly strategic. If it can get fans of McDonald's to spread their love on Snapchat — one of the fastest growing mobile platforms among the millennial demographic today; the app has more than 200 million users — those marketing dollars pay for themselves. 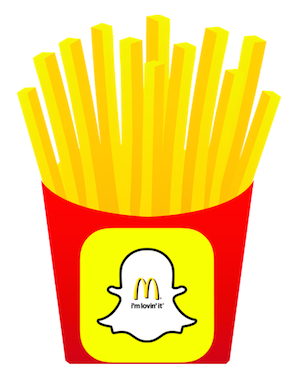 The location-specific nature of these filters is especially interesting. Because they only appear when a user is inside or near a McDonald's they may seem a bit less like advertising and more like a helpful feature for enthusiastic users. As such, fans of McDonald's will probably be more likely to use them.

Eater has reached out to McDonald's for comment. Both companies have been mum about the new marketing plan, and it's clear this may be a trial phase.

America's most popular restaurant chains have always been among the first to adopt new technology and use mobile applications as a way to reach a different demographic. Taco Bell and Starbucks have innovative apps that allow users to customize orders and pay for meals ahead of time. Domino's recently introduced a new ordering feature aimed at millennials: Users can now order pizza by tweeting a pizza emoji @Dominos.