How the Bloody Mary Came to Dominate Brunch

Share All sharing options for: How the Bloody Mary Came to Dominate Brunch

Summer is high season for brunch, that glorious, lazy weekend meal when throwing back three drinks before 11 a.m. is socially acceptable and even encouraged. Mimosas certainly have their fair share of die-hard fans, but true #teambrunch-ers know that the illustrious bloody mary is the way to go. But who dreamt up the combination of tomato juice and vodka anyway, and how'd it get to be so darn popular? Here now, a brief look at the ever-popular bloody mary:

What is a bloody mary?
A bloody mary is a mixture of tomato juice, vodka, and various spices and seasonings — typically including, but not limited to, Worcestershire, celery salt, black pepper, lemon juice, hot sauce, and even beef broth. The ingredients yield a beverage that is simple-yet-complex. Depending upon proportions, it can be sour, bitter, bright, or bold.

When and where did the bloody mary originate?
As is the case with many classic cocktails, the bloody mary's origins are a bit murky — but it's generally thought to be Parisian in origin, first concocted by a bartender at Harry's New York Bar (no relation to Harry's Bar in Venice, aka the birthplace of the bellini) who was experimenting with vodka, which had just recently been introduced to France by Russian immigrants. Its inventor, Fernand "Pete" Petiot, brought the drink with him across the Atlantic when he moved to Manhattan and took up residence behind the bar at the St. Regis Hotel's King Cole Bar. According to a four-part series on bloody mary history by cocktail authority Difford's Guide, it was temporarily renamed the Red Snapper in the 1930s when the hotel's new owner decided its original name was too vulgar.

In the 1960s, the first commercial mix, Mr. and Mrs. T Bloody Mary, was offered to the masses, ensuring the bloody's status as an enduring cocktail icon that's just as easy to make on an airplane.

Why is the bloody mary such a popular brunch drink?
The tomato juice base lends the bloody a hearty nature that has led many to consider it a "meal in a glass" — and therefore makes it seem like a perfectly acceptable, possibly-even-vaguely-healthy thing to consume at 10 a.m. Tomatoes also contain high levels of glutamic acid, the compound that gives foods the rich and savory quality known as umami. That, in combination with a bloody's usual spices and seasonings, gives the drink a rich, mouth-filling taste and texture significantly more satisfying than, say, your garden-variety mimosa. The bloody mary is also considered by many to be a restorative and hangover cure, likely due to the combination of its aforementioned hearty nature and the "hair of the dog" tradition lent by a heavy dose of vodka.

What other variations has the bloody mary born?
The simple two-ingredient base of a bloody mary lends itself to countless interpretations. The bloody maria subs the vodka for tequila; a questionably-named bloody geisha is made with sake. Whiskey lovers can swap out the vodka and make a whiskey mary (also called a brown mary). The bloody caesar, popular in Canada, gets a briny punch from the addition of clam juice (often the commercially available product known as Clamato), while the bloody bull gets meaty sustenance from added beef bouillon. There's also the popular Mexican drink known as the michelada, a refreshing mixture of beer (usually a light-bodied lager like Corona) and tomato juice spiked with lime and hot sauce. 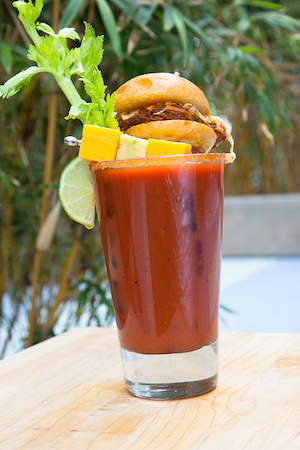 What's up with all these wacky bloody mary garnishes?
The bloody's simple, two-ingredient base recipe certainly lends itself well to being doctored up with garnishes — though some establishments have truly taken it to the extreme. Anvil Pub in Dallas serves a behemoth $20 version garnished with a plethora of oddball ingredients from a bacon and cheddar slider and beef jerky to Brussels sprouts and a whole crawfish; a version at the Ice House in Minneapolis looks relatively dainty in comparison, augmented with a strip of bacon and a mini doughnut. A Vancouver sports bar, Score on Davie, even cooked up a bloody mary garnished with an entire roast chicken. One enterprising restaurant in the U.K. has taken to rimming its bloodys with crushed sour cream and onion Pringles. While these days the inherently delicious drink has a tendency to be upstaged by wacky garnishes, the phenomenon certainly makes for some very Instagram-worthy beverages.

Nikolaj Coster-Waldau on Playing a Steely, Volatile Chef in ‘A Taste of Hunger’