The line between meal and snack continues to blur.

Share All sharing options for: Hot Pockets' New Snack Bites Take All the Work Out of Biting Into a Sandwich

In an announcement that will make snackers everywhere rejoice, CSPnet announces the unveiling of Hot Pockets Snack Bites — a new bite-sized option that takes all of the hard work out of biting into a sandwich. 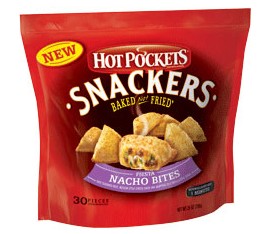 Marketing Manager Christopher Brody noted in a release that a handful of Hot Pocket Bites can be a meal, no biggie: "Today's millennials aren't sitting down to a traditional three meals a day, so the lines have become blurry between meals and snacking."

While the uneducated eye may think these new Bites look exactly like Hot Pocket Snackers, which came out several years ago, a representative notes the differences can be seen in the bites' "size, shape, quality of ingredients, and flavors." Duh, they're totally different. One thing that may need a little more explaining is why their promo images (shown above) include flames, when the microwave ovens used to prepare them are, well, flameless.