It's the CNN host's first investment in a media company.

by Daniela Galarza May 27, 2015, 9:00am EDT
Via About Roads & Kingdoms [Official] and Rice, Noodle, Fish Deep Travels Through Japan's Food Culture [HarperCollins]

Anthony Bourdain — television host, author, book publisher, gadabout — is about to pad his resume with one more role: media investor. Roads & Kingdoms, the website that publishes features and travelogues on politics, culture, food, and drink, confirmed that Bourdain has joined the team as the site's chief investor and editor at large.

It's a first for Bourdain, a media darling, and represents a shift for Roads & Kingdoms which had heretofore been something of a bootstraps operation. As chief editor and publisher Matt Goulding noted in an email "it's a significant moment, a high-profile vote of confidence in slow journalism." Bourdain is giving more than just money to the small site: As editor at large, he'll be corralling writers for a new longform series. And the partnership works both ways: Roads & Kingdoms will be publishing books on Bourdain's Ecco imprint at HarperCollins.

Reached by phone from Barcelona, Goulding chatted with Eater about the past, present, and future of Roads & Kingdoms in light of the site's new investment and direction. After meeting while on a job in the Catalonian countryside in 2011, Goulding discovered Bourdain was an early fan of Roads & Kingdoms. Not long after, Goulding pitched a book idea to the CNN host over email. That book, Rice Noodle Fish: Deep Travels Through Japan's Food Culture, "a deep dive into the eating culture of Japan, a guidebook of sorts for serious eaters" comes out this fall. 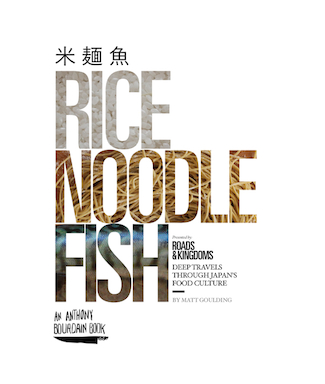 Through the book idea came the larger notion of Bourdain's investment in Roads & Kingdoms, the website. The two teams have been discussing the idea for about nine months. Goulding says, "digital has always been our focus. Roads & Kingdoms has overlapped in a lot of ways with what Tony has done in the book and TV world. [It's about] telling these stories, the intersection of food and travel and culture. The books are a way for us to extend R&K, a printed extension of R&K." Goulding hinted at possibility of other books after Rice Noodle Fish but wouldn't elaborate on a series.

Rice Noodle Fish was written by Goulding, edited by Roads & Kingdoms' co-editor/publisher Nathan Thornburgh, and designed in-house. Goulding confirmed, "It's a R&K project... It gets at the heart of what we do at R&K and what Tony does... the deepest parts of culture are at the end of a fork or bottom of a bowl."

"What we're doing is unpacking the guidebook experience," says Goulding. Along with the book, which will be presented as a set of long stories, there will be a digital companion with all of "the intel, where we ate, drank, all of the coolest corners."

Meanwhile, Bourdain will serve as Roads & Kingdoms' editor at large and investing partner. He'll be editing a new section of the longform side of the site called Dispatched, which launches today.

In addition to Dispatched, Roads & Kingdoms recently launched two new shorter form sections: Breakfast and 5 O'Clock Somewhere to share shorter snippets of a traveler's eating and drinking experiences while abroad. Bourdain will also weigh in on the direction of the site, and the R&K team plans to solicit his feedback on any big moves.

Goulding and the R&K team are obviously excited about the new partnership and investment. "Tony gives us hope that authenticity is a good business to be in. [He] said, no matter what happens from here on out, I don't believe you should compromise... expectations change, but we all want more of the same: deeper and better versions of what we do now and I think we'll be able to do that together."