The company is thankful for Ozersky's ongoing support of the colonel.

This morning, KFC confirmed a donation of $15,000 to the Josh Ozersky memorial bench fund. Earlier today, donors to the fund — which was established by friends upon the prolific writer's untimely death — noticed that a new massive donation had arrived from Kentucky Fried Chicken.

Earlier reports were unconfirmed, however. Donors can contribute anonymously or choose any public name when giving money to various crowd funding sites. Eater reached out to KFC, and a KFC spokesperson confirmed that the donation was indeed from the chicken chain. 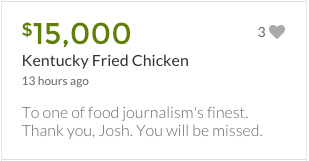 Upon making the $15,000 gift, KFC wrote, "To one of food journalism's finest. Thank you, Josh. You will be missed." A spokesperson further explained that the company was grateful for Ozersky's support in his 2012 book, Colonel Sanders and the American Dream. The donation goes toward the erection of a memorial bench in Josh's hometown of Portland, Ore.

KFC's representative said that after the company made the donation, GoFundMe's goal increased. The company did not mean to increase the page's goal, but noted that some have suggested that if there are additional funds, perhaps a second bench could be erected in New York City as well as in Portland, and KFC is in favor of second memorial bench.