Why You Should Know the Name Paul Prudhomme

The inventor of the turducken and father of modern Cajun and Creole cuisine died at the age of 75.

Share All sharing options for: Why You Should Know the Name Paul Prudhomme

Paul Prudhomme, the chef who popularized modern Cajun and Creole cuisine in New Orleans and across the country, has died at the age of 75. Prudhomme's name may not have made it as far and wide as Wolfgang Puck's, but the two chefs share the distinction of being the first-ever celebrity chefs in the United States. 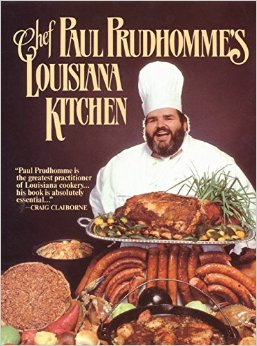 Prior to 1970, Prudhomme — who also went by the name Gene Autry Prudhomme — bounced around kitchens in Colorado after a failed stint as the owner of a burger restaurant called Big Daddy-O's. When in the late 1960s he realized the cooking of his mother and grandmother was not known outside of the South, he moved back to his home town and landed a job as the first American chef to run the kitchen at Commander's Palace, New Orleans's fine-dining mainstay.

Prudhomme's legacy is felt strongly at Commander's Palace, where he helmed the kitchen for four years. In 1979 he left to open his own restaurant, K-Paul's Louisiana Kitchen, with the woman who would become his wife, K Hinrichs. Not long after, a young chef named Emeril Lagasse took over Commander's stoves.

At K-Paul's — which celebrated its 30th anniversary earlier this year — Prudhomme refined his style of authentic but elevated local cuisine, influenced by the traditional Creole and Cajun recipes he grew up eating. John Pope of The Times-Picayune writes:

At first, it was a neighborhood restaurant, a dim, even cozy spot in an unpretentious brick building, designed for French Quarter residents and their friends. But word of its specialties — redfish Czarina, sweet-potato pecan pie and, of course, blackened redfish — spread, and out-of-town food writers — most notably Craig Claiborne of The New York Times — joined the line outside the door. They came out raving over what they ate inside.

The restaurant remains a popular fixture among NOLA's elite dining establishments. By the 1980s, Prudhomme was a household name, with cookbooks and television shows under his belt. His book Chef Paul Prudhomme's Louisiana Kitchen, which was published in 1984, is still considered a classic. He authored 11 books in total, hosted in five television series, and starred in two videos, "Louisiana Kitchen: Vol. 1: Cajun Blackened Redfish" (1986) and "Louisiana Kitchen: Vol. 2: Cajun & Creole Classics" (1990). In 2009, a filmed biography of his life titled Paul Prudhomme: Cajun Sensation was released.

Prudhomme expanded his brand with spice mixtures and smoked meats — which are still widely available today — and was, for a time, better known than Julia Child. His modern day claim to fame? The one and only duck-stuffed-in-a-chicken-stuffed-in-a-turkey known as the turducken, a spin on classic French technique that only a man of Prudhomme's inventiveness and style could have executed with finesse. Some say he's better known for his blackened redfish, a Cajun dish that might never have seen a white tablecloth were it not for Prudhomme.

Prudhomme's impact on American culinary history will be felt for decades to come. Below, chefs, food writers, and former colleagues share their memories of chef Prudhomme.

"Our entire family is so saddened to hear of the passing of our dear friend Paul. We admired him immensely and loved his talent and his effusive love of people. Paul was a joy to work with and he's been an inspiration to all of us in the food world. Cajun and Creole cuisines crashed in the kitchen of Commander's Palace in the 1970s with Paul Prudhomme and Ella Brennan and the Brennan family. Prior to that, Cajun food had not been a part of New Orleans cooking. The result was an explosion of spectacular flavors and wonderful cooking that influenced the city, state, country and the world. There's been no better ambassador for New Orleans and Louisiana than Paul Prudhomme and he will be greatly missed."

It would be difficult to overstate the influence of Paul Prudhomme on the community of chefs that sprung up in the United States in the late 1970s and early 1980s. Well before it was fashionable, or even acceptable, for an American kid to pursue a career in the kitchen, he was doing it, and doing it grandly. In an age when French food reigned supreme, his unabashed celebration of an indigenous, regional American cuisine was also revelatory. Because of these defining traits, Prudhomme inspired not just those who experienced his food firsthand in New Orleans (including a young Eric Bromberg, who went on to create Blue Ribbon with brother Bruce), or who worked for him (including David Kinch and Jan Birnbaum), but also young prospective whisks sticking their toes in the water of professional cookery all over the county for whom he was a one-man North Star. He took his show on the road to California and New York (an early precursor to what we'd now call a "pop-up") and — of course — was perhaps the very first American "celebrity chef," before that term was commonly used. The casualization of the dining experience is usually (and rightfully) traced to certain California restaurants of the late 70s and early 80s, but K-Paul's also deserves its share of credit for presenting a serious, personalized cuisine in a distinctly relaxed setting that was true to its place and time—one of those restaurants from which you can trace a dotted line to what and how we eat today.

"I am deeply saddened by the passing of chef Paul Prudhomme. Paul was an absolute legend who introduced the world to Cajun cuisine and put Louisiana cooking on the map. His restaurant K Paul's and his books were absolutely brilliant and always an inspiration to me. Paul was a mentor, friend, pioneer, and world ambassador to Louisiana that will be dearly missed. Not only in New Orleans but in American cuisine. My heart goes out to Paul's family at this difficult time."

"Paul Prudhomme was a pioneer, and his passing is a tragic loss to not only the New Orleans food community -- his home -- but to the country and the world. He brought attention to the food and culture of our city and state and was the man that gave us blackened fish, one of New Orleans' iconic dishes.

"My first memories of Paul go way back -- he was a warm and welcoming friend to so many. Paul was instrumental in putting New Orleans on the map in the late 1970s and 1980s, and his leadership never faltered. He was one of the key chefs and restaurateurs who was an integral part to the reopening and rebuilding our beloved city after Hurricane Katrina, even extending his gracious hospitality to his staff by providing housing to those who lost their homes.

"I will never forget his quintessential smile, and seeing him sitting out front of K-Paul's with a jazz band swinging by his side, welcoming passerbys back to the French Quarter. There will never be another like him."

"Prudhomme had, by any measure, one of the most influential careers in the history of American culinary arts. He broadened New Orleans culinary palate by incorporating dishes and ingredients from his native Cajun country and, in the process, helped to establish New Orleans as a place people would visit just to eat. He also reinvented what it means to be a restaurant chef in America, by branching out beyond the kitchen into television, cookbooks and creating branded products for grocery store shelves. None of these activities were common at the time he pursued them."

I never met Chef Paul Prudhomme, but he taught me to make gumbo. Within a few months of my moving to New Orleans sixteen years ago, a bookseller told me that "Chef Paul Prudhomme's Louisiana Kitchen" was the only book on Louisiana cooking I needed to own if I wanted to learn the principles of the native kitchen: roux, rice, seasoning. I continue to believe the bookseller was correct. And now I own two copies, just in case.

"Paul was a beautiful, selfless man who shared our culture, hospitality, generosity and certainly our delicious food with the entire world. I met Chef Paul when I was 11 years old and knew that I wanted to follow in his footsteps. He selflessly passed his television show onto me with the directions to continue to share our great cuisine and culture with the world. He also carved the way for chefs to break out of the kitchen, into entrepreneurship, and called each of us to follow his example. We are all indebted to him and his leadership."

"A book could be written about his influence on the New Orleans, Louisiana, American and world cuisines. In his prime in the early 1980s, there was no chef whose fame exceeded his. Nor was there ever a time when, in his reflected starshine, Cajun and Creole food was held in greater regard. To dine at his restaurant K-Paul's Louisiana Kitchen required a long wait in a line that went to the end of the block and turned left. Thirty years after its publication, his first cookbook Chef Paul Prudhomme's Louisiana Kitchen remains among the best-selling cookbooks in the world-to say nothing of the many great books he wrote afterwards. His Creole-Cajun seasonings are among the best-selling in the business, and set the standard for many of them.

But for all that, Chef Paul's greatest achievement was in changing the way American people-especially young adults-looked upon the restaurant industry. Chef Paul changed the image of a cook from just a a job into a career. Of course, he himself was the best illustration of the possibilities. He grew up in a large, poor Cajun family and turned himself into a world-class chef."

"I never met Paul, but I remember the impact of his Blackened Redfish in the early '80s. Hardly anybody else knew how to properly blacken anything back then, but the dish was such a national sensation, on the order of coonskin caps or hula hoops, that every chef tried. They started wielding white-hot cast-iron skillets and blackening every fish they could find. Restaurants filled with secondhand smoke that couldn't be blamed on cigarettes. That dish brought about a love of Cajun cuisine that begat Emeril Legasse and caused so much overfishing that the commercial harvesting of redfish in coastal states was temporarily banned. Anybody who makes a list of the most influential dishes in American history has to put Prudhomme's Blackened Redfish near the top."