Is a Buddhist Nun Making the World’s ‘Most Exquisite’ Food?

Why international chefs are taking pointers from Korean temple cuisine.

Share All sharing options for: Is a Buddhist Nun Making the World’s ‘Most Exquisite’ Food?

Is a woman with a vegan arsenal of ingredients, a limited audience, and no professional culinary training one of the world's top chefs? This is the question author Jeff Gordinier poses in a profile of Zen Buddhist nun Jeong Kwan, 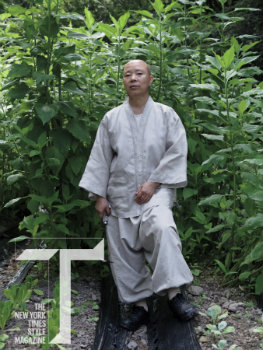 featured this week's issue of T Magazine. Kwan lives and cooks in a secluded monastery several hours outside of Seoul, carrying out centuries-old Buddhist culinary traditions including fermentation, dehydration, foraging, and seasonality in relative obscurity. Yet her techniques and approach to cooking have captured the attention of prominent Western chefs such as Eric Ripert and Rene Redzepi.

Ripert himself introduced food and travel writers, including Eater's Hillary Dixler, to Kwan's temple cuisine during a private tasting at Le Bernardin last February. Her dishes are designed to be nourishing, temporary, and not "craveable." They often combine "what's freshly plucked with what's patiently funkified" and are notably absent of onion and garlic, ingredients that some Buddhists believe stimulate the libido. The author writes:

We are served slices of Korean pear, glazed with a tart citrus sauce, and pickled herbs, handmade dumplings and mushroom caps filled with diced tofu, and rice that has taken on the yellow hue of gardenia seeds. We have kimchee that has been buried in a hole in the ground for months, and we have summer kimchee that Kwan makes fresh, with cabbage and radish and copious fistfuls of salt. She grates potatoes by hand for her pancakes, which she layers with chopped leaves of that fresh mint from her garden . . . We watch how she relies on alchemies of smoke and steam, soil and water, bacteria and air, and we learn that she likes to cap off a meal or a conversation with cocktails, even though here they are of course rigorously nonalcoholic.

According to Gordinier, Kwan began her culinary journey when she joined the Zen order at 19 and realized that the best way for her to share her the Buddhist philosophy was by "communicating with sentient beings through the medium of food." At the monastery she spends her days cultivating a garden and becoming close to her food in order to produce the best flavors. "Let nature take care of it," she says.