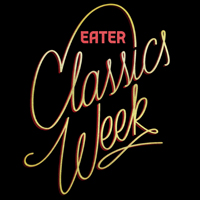 Even though it's closed today, no restaurant has more franchises in my heart than the Royal Canadian Pancake House. Opened in 1989, closed in 1998, in nine short years it managed to turn New York City into a Canadian wonderland that's remembered fondly by everyone from breakfast nuts (who brought their own maple syrup when they ate) to Sylvester Stallone, who raved about it to Larry King.

The first RCPH opened its maple-flavored doors in 1989 on Hudson Street and quickly expanded to Midtown East, the Upper West Side, and Gramercy. Since the only Canadian restaurant I'd ever heard of before was the Canadian-themed restaurant in Gremlins 2: The New Batch, I was there within minutes of hearing its name, expecting a kitschy touch of home. What I got was so much more.

The Royal Canadian Pancake House specialized in size. Order silver dollar pancakes and you got 12 normal-sized pancakes. Order regular pancakes and three monstrous, manhole-sized megalodons landed on your table like a doughy hurricane. Sure, sometimes they weren't completely cooked in the center, but no one ever made it to the center anyway. These pancakes weren't a waste of food, they were the kind of breakfast that made your eyes light up and your jaw drop, transforming adults into little kids, destroying all resistance. RCPH pancakes had to be flipped on the griddle with a snow shovel. You had to take your leftovers home in a pizza box. I spent 1993's Storm of the Century trapped in a friend's apartment on Seventh Street. We had a pizza box of RCPH leftovers sitting on the fire escape and we waited out the storm huddled on her futon, playing Zombies Ate My Neighbors on Super Nintendo, hauling in wedges of frozen pancake when we got hungry. It fed us for days.

But it wasn't the pancakes that I truly loved. In fact, most of the people I know ordered them once, then moved on to the real mind-blowers: Womlettes and Canadian Crackers. Let's be very clear: These are not native Canadian foods... but they should be. The Womlette is a giant waffle with an omelette on top. Any kind of omelette. It was so popular that as the RCPH entered its death-throes, the owners opened the Royal Canadian Womlette House in Miami Beach. But for me, the Canadian Cracker was the bomb. The base was a waffle, then came a layer of fried eggs, lovingly topped with layer after layer of melted cheese. They were the bastard offspring of eggs and waffles, and they were delicious.

I basically lived at the RCPH that finally opened in Gramercy, and I remember well the Social Realist murals on its walls, featuring healthy Canadian farmers driving tractors, presumably tilling their Womlette fields or planting a fresh crop of pancakes. It was a privilege and an honor to eat beneath their stalwart gazes, these men and women of the prairie who ate giant pancakes and put chocolate chips inside their cornbread. These Canadian heroes never met two breakfast foods that couldn't be cross-bred.

In 1998, the investment banker who took the restaurant public was reportedly indicted by the SEC for ethical violations, and the RCPH closed shortly thereafter. Those who have never eaten there might be inclined to dismiss it as a novelty restaurant, but it was no such thing. In a city where brunch has become the stupidest meal of the week thanks to restaurants that ought to know better slopping out Eggs Benedict and crummy mimosas by the gallon, the RCPH was a classic. It cared about breakfast, and it got breakfast right. The new Dirt Candy is eventually going to serve brunch, and there's nowhere left in New York that I can look to for an example of what to do. Breakfast should be ridiculous, breakfast should be delicious, breakfast should be fun — the way they used to do it at the Royal Canadian Pancake House.