No one in the last thirty years has done more to pry loose our death grips on the queso dip bowl and fajita platter and gently introduce us to the glories of regional Mexican flavors than chef Rick Bayless. Author of eight cookbooks, teacher, television host, fundraiser, Top Chef Masters champion: He's a one-man Mexican Empire.

In 1987, the same year Bayless published his first tome, Authentic Mexican, he and his wife Deann (who also co-penned the book) opened midscale Frontera Grill. It bridged the gap for Middle America, eschewing the combo plate but luring customers with smoky wafts from the grill fueled by hardwood coal, build-your-own tacos, and enigmatic moles. Precision-engineered margaritas smoothed the conversion. Two years later the Baylesses launched fine-dining Topolobampo in a room off one side of Frontera. It was the sophisticated approach to Mexican cuisine that Bayless had wanted to take in the first place, though he was smart enough to know he needed to first win over palates with Frontera's accessibility. He wooed at Topolo via saucing: wild turkey breast with heady chocolate mole, mahi mahi with poblano cream, empanadas napped in avocado puree.

Topolo is celebrating its twenty-fifth anniversary this fall. Since then, Bayless has opened other restaurants, including a second location of casual torta shop Xoco in Chicago's Wicker Park last month (the original Xoco is next to Topolobampo) and two locations—with a third on the way—of his Mexi-Cali concept Red O in Los Angeles. Checking in on the siblings that became icons, I Bayless-binged by lunching at Frontera Grill and then having dinner at Topolo. 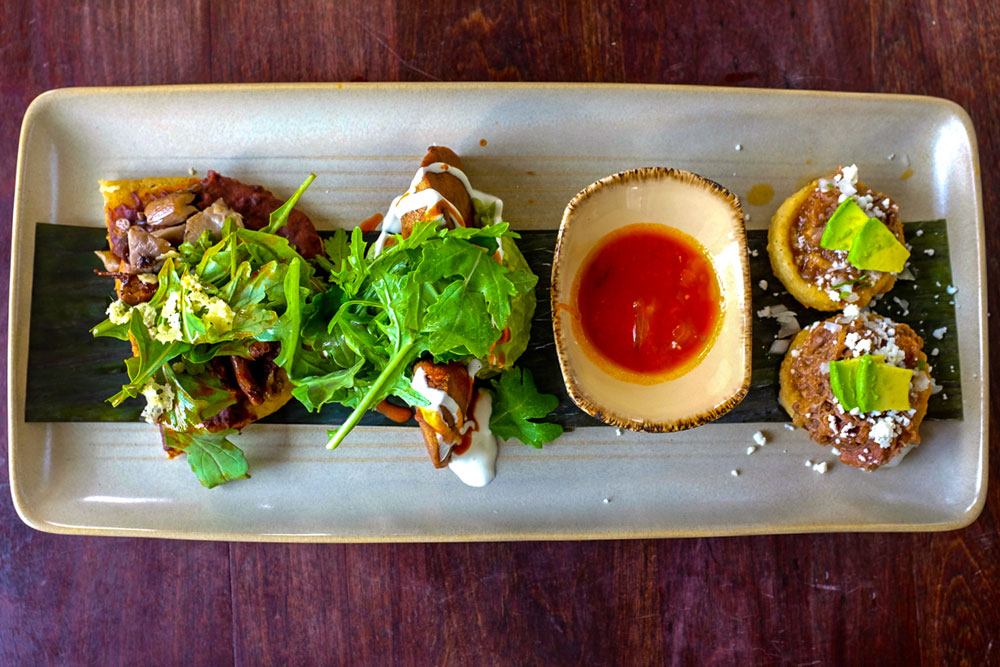 One of my closest friends, a Chicago native, took me to Frontera Grill on my first visit to the city in 1990. We stood huddled in the cold outside, waiting in line, and the restaurant's spasm of primary colors and campfire scents thawed us as soon as we shuffled through the door. I remember being mesmerized not just by the warmth of the flavors but the exactness of the food's seasoning: the fastidious ratios of salt and citrus in the ceviche, the black mole's dusky-sweet alchemy, the revelation of fresh corn tortillas. Eating at Frontera was an awakening.

The same friend and I are having lunch at Frontera over two decades later. We're wiser now: We arrived at the restaurant at 11:20 a.m., ten minutes before opening, to beat the wait. She wants all the classics: guacamole, smoked chicken taquitos, tacos, the killer chocolate-pecan pie with Kahlua whipped cream hat's been a staple since the restaurant's first month. I'm eyeing the novelties that frequently revolve through the menu and keep the kitchen's energy kindled. We order some of everything.

Part of Bayless's savvy as a restaurateur has been to distill his years of research into menus that provide all-inclusive tours of Mexican cookery. Oaxacan chile-marinated steaks and Mexico City-style quesadillas that resemble cornmeal turnovers share the spotlight with Veracruz salsas and Yucatan ceviches. Rather than a regional immersion, it all blurs into a satisfying whole. And the kitchen sometimes takes creative liberties with staples. Beyond the standard guacamole, for example, there are seasonal variations: We try one with fresh habaneros, grilled onions, roasted garlic, sour orange (popular in the Yucatan), and minty hoja santa as an intriguing departure from cilantro. The description sounds cacophonous but the flavors mellow and merge harmoniously. 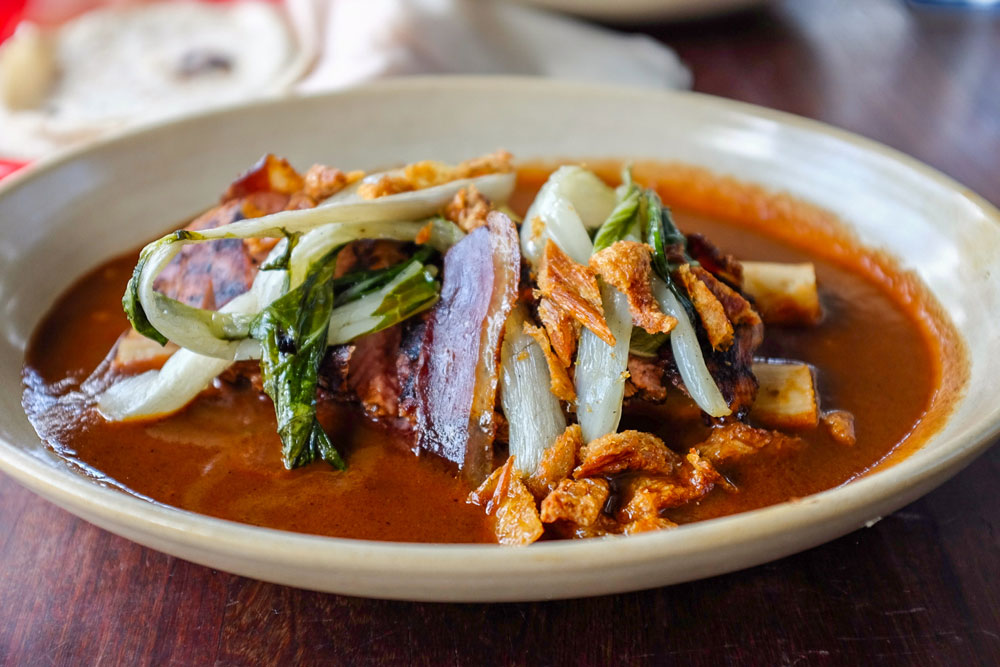 Not every dish electrifies, though; the kitchen doesn't seem as rigorous with its execution as it once was. The flavors in the Frontera ceviche—albacore tuna with tomatoes, olives, and cilantro—are muddier than I remember, and the Oaxacan sopes filled with shredded beef aren't as wonderfully crisp. The lunch's most exciting effort is a study in duck: rosy breast in date mole (dates are an important crop in Baja California) with ancho chile to offset the sweet spices, and garnishes of duck prosciutto and duck chicarron that further balance with their earthiness.

A plucky dessert presenting corn three ways—cornmeal in a pound cake, sweet corn ice cream, and a scattering of caramel corn on the plate around silky sliced apricots—impresses but doesn't vanish as fast as the chocolate-pecan pie. The sweets have always been the least truly Mexican dishes at the restaurant, but it doesn't matter. Frontera is like an old friend at this point. Maybe the cooks could more finely tune their final results (a constant challenge in such an always-mobbed place) and perhaps nostalgia fuels some of the enjoyment, but Frontera is still worlds better than most of the country's serious Mexican restaurants. 445 Clark Street, 312-661-1434, fronteragrill.com. Open for dinner Wednesday 5:20-10 p.m., Wednesday-Thursday 5-10 p.m., Friday-Saturday 5-11 p.m.; lunch Tuesday-Friday 11:30 a.m.-2:30 p.m.; brunch 10:30 a.m.-2 p.m. Most lunch small plates $5-$9, ceviches $13.50-$15, entrees $15-$29.50, desserts $7.50-$9. 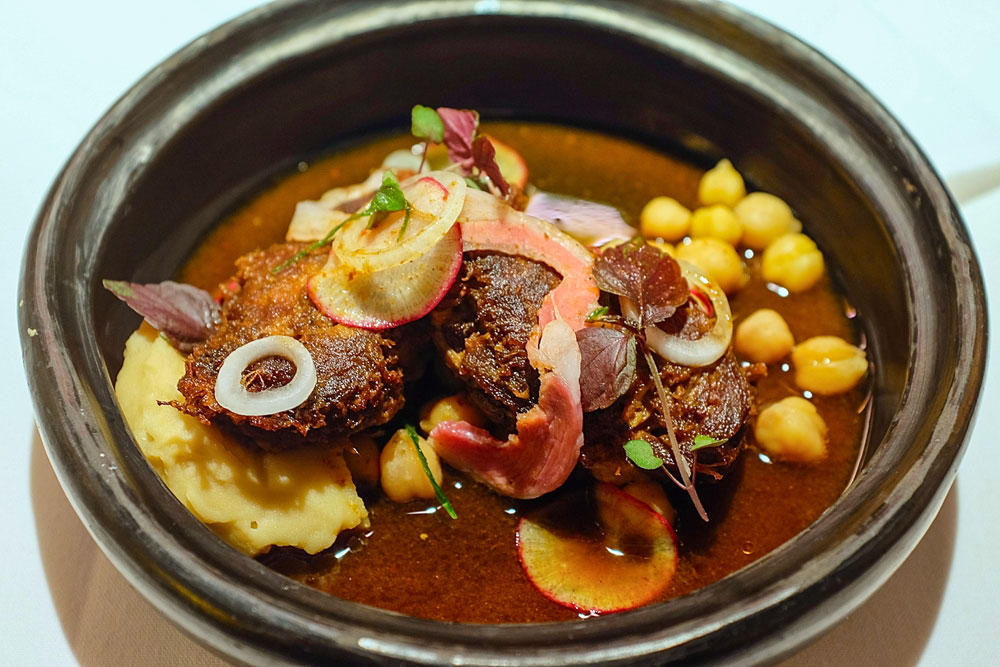 Bayless has been doting extra attention on his crown jewel to honor its quarter-century anniversary. He refreshed the sanctuary of a room with subtle decor tweaks, ordered new tableware (a mix of Bernardaud china and handmade Mexican pottery), and most notably changed the dining format. Rather than starters and mains, the kitchen makes every plate the same size and groups the menu into categories of dishes that reflect their defining characteristics: "fresh," "enchanting," "complex," "luxurious." Three, five, or seven courses are standard, though the engaging staff will happily customize the meal to however many dishes you'd like. 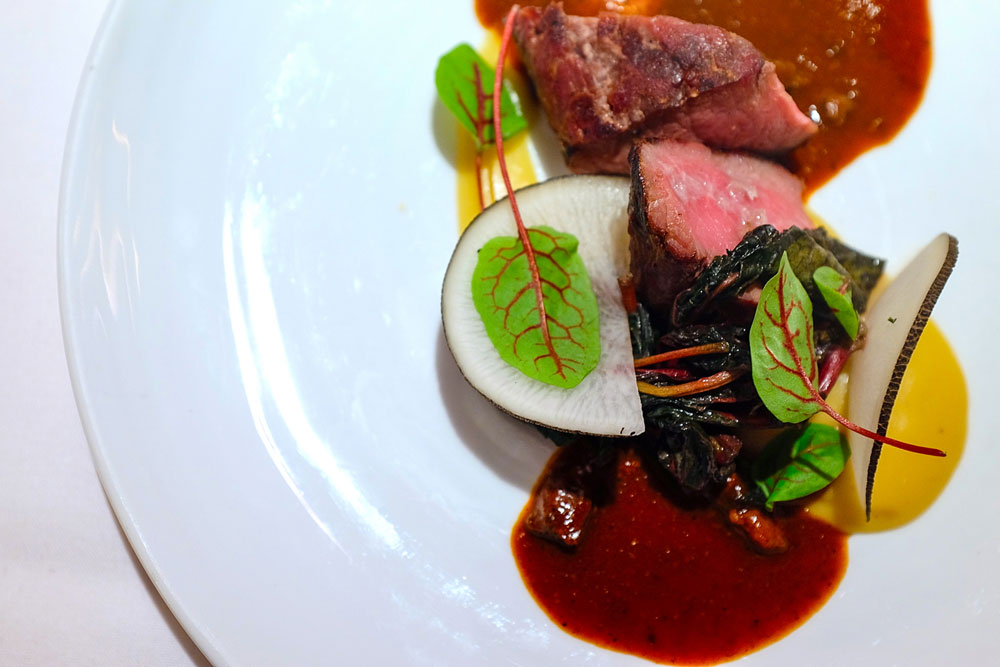 It sounds a bit precious but it works as an enabling guide for individual tastes—and as a personality test of sorts. I'm not exactly sure what it means that I was drawn to "ancient" and "soulful," but the attraction brought haunting pleasures like goat barbacoa in a broth of braising juices and red chiles, strewn with chickpeas cooked just to the point of creaminess and with radishes for crisp, juicy counterpoint. Roasted purple potatoes achieved similarly profound flavor steeped in chileatole, a cross between a soup and a beverage thickened with corn masa and aromatic from guajillo chiles and musky epazote. One more meaty wonder: blushing lamb shoulder braised in hatch chiles (leaving traces of vegetal smokiness), flanked by wilted amaranth greens and sauced with red chile gravy and bone marrow-enriched potato crema. Chef de cuisine Andres Padilla knows how to romance the proteins.

Between Topolo and Frontera, Topolo is the one to visit right now.

These dishes succeeded so richly because they conjured the comforts of rustic Mexican cooking—the slow heat, the spicy insinuations. The most memorable creations stayed that course. A dish called "Flowers and Cheese" was comely but surprised with its intricacy: homemade queso fresco and sungold tomatoes hid under a "masa veil," which was like a tamale rolled flat and crisped. Toasted ancho chile and browned butter gave the composition some heft, and the spray of edible herbs and flowers atop were of course from Bayless's rooftop garden overhead. When a dish's theme wandered too far, it disappointed. Lemon-tequila ice cream wasn't enough to wrangle a fiddly, deconstructed raspberry shortcake back to the fold. Much better to savor the cajeta crepes with chocolate, toasted meringue, and caramelized plantain ice cream. 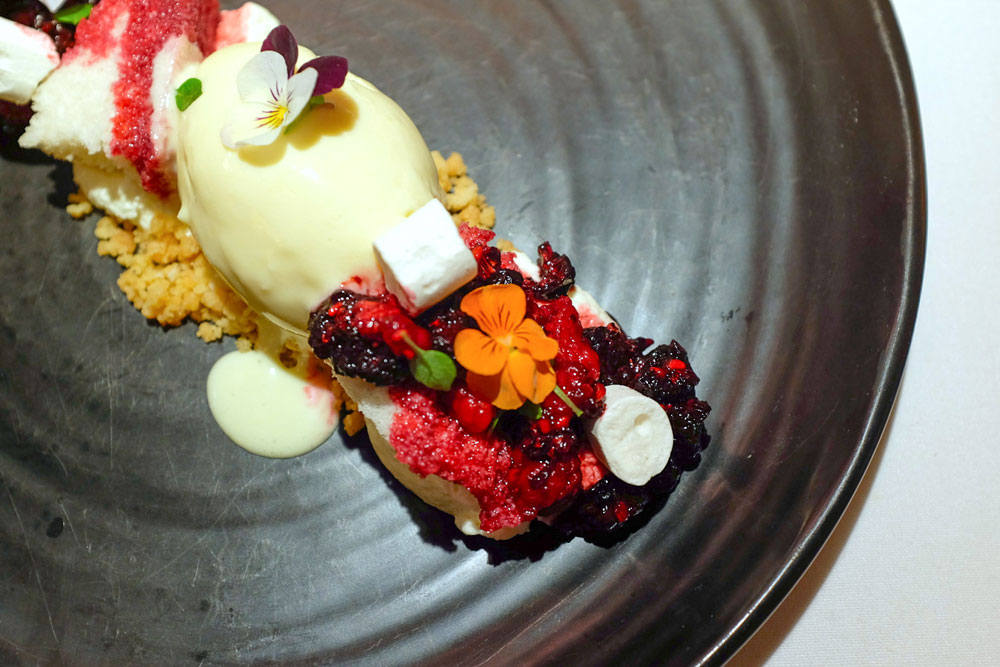 All through the year, Bayless and his crew are running special menus that reflect the country's history: Currently they're highlighting "Mexico City, 1831" with features like a summery version of chile en nogada or quail in pine nut sauce. As a culinary history buff, I would have geeked out on one of these brainstorms, but when I was there the restaurant was instead running a menu inspired by the evocative art hanging in the dining room. It didn't tempt as much personally, but the dishes from the regular menu dazzled plenty. Between Topolo and Frontera, Topolo is the one to visit right now. 445 North Clark Street, 312-661-1434, rickbayless.com/restaurants/topolobampo. Open for dinner Tuesday-Thursday 5:30-9:30 p.m., Friday-Saturday 5:30-10:30 p.m. Three courses for $55, five for $90, and seven for $120. Wine pairings available and recommended, as are the mezcal cocktails.
Email Bill at bill@eater.com and follow him at @BillAddison.

Our review of Bar Sotano